Gliomas are considered the most malignant cancers of the body. Despite the advances in cancer therapy, this type of tumor continues to progress and be more aggressive. In human gliomas, anti-tumor T cell responses are inhibited through induction of local and systemic immunosuppression. Cancer immunotherapy using immune checkpoint blockade has made a great stride in mending patient’s clinical outcome for multiple types of cancers. However, many studies reported that treatment of glioblastoma patients with anti-CTLA4 and anti-PD-1 has no survival benefit compared to standard chemotherapy. The aim of this study was to investigate the role of regulatory T cells as well as VISTA in the suppression of immune cell functions within glioma microenvironment, using molecular biology and bioinformatics approaches. Foxp3 and VISTA mRNA expression were assessed in human glioma patients at different grades using 2 independent cohorts, a set of 20 Moroccan patients, and a series of 667 patients from TCGA. The expression of Foxp3, a transcription factor specific for Treg cells, and VISTA, a newly identified immune checkpoint molecule, significantly correlated with gliomas grading and with the most aggressive histological type. Indeed, this expression was associated with bad overall survival of patients. Thus, finding new strategies for blocking VISTA on Treg cells in the tumor microenvironment could be beneficial in stopping the tumor progression. Our study highlighted a correlation between high levels of VISTA expression and Foxp3 with a bad prognosis in glioma patients. VISTA expression in Treg cells might be involved in glioma progression and could be considered as a possible new therapeutic target especially in glioblastoma.

Gliomas are the most frequent and aggressive primary brain tumors in adults. They constitute a deep and unresolved human clinical problem. Although, considerable progress has been made in the treatment of other types of cancers, many questions remain unanswered around gliomas [1]. Despite current treatments, including surgery, chemotherapy, and radiation therapy, these tumors continue to grow and recur with a more aggressive and resistant phenotype [2].

An interesting way to kill malignant cells would be to induce an immune response against the tumor. It should be able to distinguish tumor cells from normal cells [3]. However, it is interesting to exploit this potential to fight gliomas. Ongoing and recently completed clinical trials include the use of cancer vaccines, adoptive transfer of effector cells, and the use of checkpoint inhibitors to reverse the immunosuppression prevalent in the tumor microenvironment [4].

Forkhead box protein P3 (Foxp3) was shown to be a key regulatory gene for development of regulatory T cells (T reg). It was reported in the 1980s that CD4+ CD25+ T cells could inhibit anti-tumor immunity [9]. However, in 2003 it was demonstrated that Foxp3 plays an important role in the differentiation, development, and function of regulatory T cells [9]. In addition, in 2005, Foxp3+ CD25+ CD4+ T cells naturally expressing Foxp3 were defined as Treg cells [10].

Glioma microenvironment is known to be profoundly immunosuppressed, and understanding whether these tumors have Treg-mediated immune resistance would be interesting to develop and initiate specific immunotherapeutic approaches [11].

VISTA belongs to the CD28 receptor family and is expressed primarily on myeloid and granulocyte cells, NK cells, macrophages and DCs, but not on B cells. Its expression is highest in naive cells and FoxP3+ T reg cells [12]. Through the interaction with the receptor on T cells, VISTA negatively inhibits T cell responses [13]. In vitro, it induces the development of Treg cells with the help of TGF-β [14]. The present study aimed to investigate the potential relationship between Foxp3 and VISTA expression, according to human glioma progression.

Transcriptome data of patients diagnosed with glioma (WHO II-IV) were collected from The Cancer Genome Atlas (TCGA) dataset (n = 667) (http://cancergenome.nih.gov/). Data analysis as well as statistical tests were carried out by two different people in the lab. During the analysis with TCGA RNAseq data, expression values were log converted.

Relative quantification of gene expression was analyzed by real-time PCR in the presence of the fluorescent dye SYBR ™ Green PCR Master Mix (Thermofischer). β-actin was used as an internal control to evaluate relative expression of VISTA and Foxp3. Experiments were performed in a 20μL reaction volume with specific primer pairs used at 10 µM for all genes.

PCR was programmed as follows: 10min at 95°C for polymerase activation and sample denaturation, then 40cycles of 15s at 95°C and 60s at 60°C for annealing and extension. Fluorescence readings at the end of the extension phase of each cycle were used to estimate the values for the threshold cycles (Ct).

Primer pairs were as follows:

The Ct values for each gene were converted into relative quantification (2-ΔCt).

To assess the association between Foxp3 expression and glioma pathogenesis, 20 glioma cases were analyzed. mRNA expression levels of Foxp3 were evaluated by real time RT-PCR. Foxp3 gene showed a significantly higher mRNA expression in advanced grades of gliomas (p = 0.004) (Figure 1A). On the other hand, we evaluated the expression of VISTA, an immune checkpoint molecule that is known to be highly expressed on myeloid cells and Foxp3+ CD4+regulatory cells [14]on the same set of glioma patients. VISTA transcripts were also significantly elevated in high grade glioma patients compared to low grades (p = 0.0354) (Figure 1B). 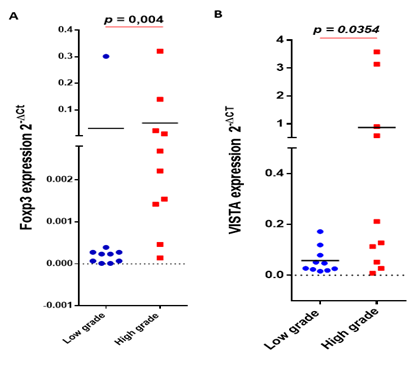 In order to study the expression of Foxp3 and VISTA in a distinct cohort, we analyzed the RNA-sequencing data of gliomas from the TCGA dataset. 667 samples were evaluated and were organized according to the WHO grading system. Compared to low grades, high grade gliomas present a significantly higher Foxp3 and VISTA expression (p<0.0001) (Figure 2A). 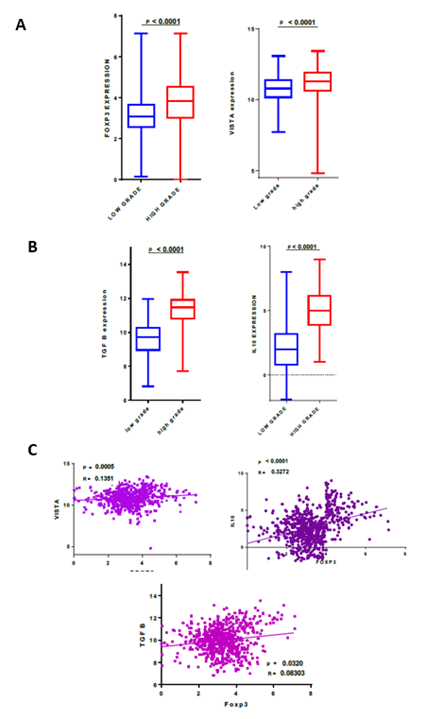 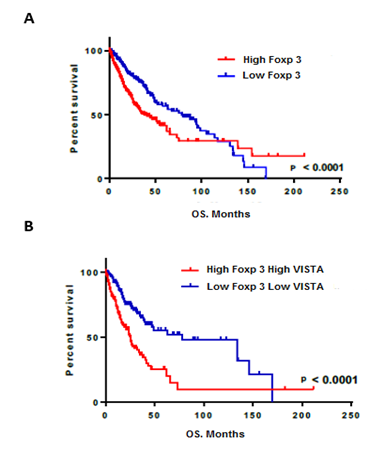 3.3 Elevated expression of Foxp3 and VISTA in glioma patient’s microenvironment associated to a poor overall survival

In order to investigate the impact on patient survival, we evaluated the prognostic value of Foxp3 and VISTA in the TCGA dataset. Survival data were available for 666 human glioma patients. As showed using Kaplan–Meier curves, patients with lower Foxp3 expression had better survival in comparison with patient with higher expression of Foxp3 (p<0.0001) (Figure 3A). Remarkably, glioma patients having higher expression levels of both Foxp3 and VISTA showed a profound bad survival compared with those presenting low expression of both genes (p<0.0001) (Figure 3B). These results indicated that regulatory T cells that express VISTA could be considered as a bad prognostic factor for patients with glioma.

Gliomas are known to be the most frequent and fatal primary brain tumors in adults [17]. Despite treatment of glioblastoma patients with conventional therapies, the prognosis is still poor [6]. Immune checkpoint inhibitors blockade is one of the newest and promising approaches to boost the anti-tumor immune response and it has made great stride in improving patient's clinical outcome for multiple cancer types [18, 19]. Unluckily, the majority of glioma patients did not respond to the blockade of usual immune checkpoint pathways [5-8], which catalyzed our interest in exploring additional targets to enhance the immune system against glioma progression.

In this study, we attempted to investigate the role of regulatory T cells (Tregs) in glioma. A wide variety of markers are expressed in Treg cells, including Foxp3 which is the most specific and the main regulator of these cells [18]. We tried to evaluate the Foxp3 and VISTA (Immune checkpoint molecule that is highly expressed on myeloid cells and Foxp3+ CD4+regulatory cells [14]) expression according to glioma grade. We found that Foxp3 expression was significantly correlated with the histological grade of glioma. Patients with high grade glioma (grade III and IV) presented a significant overexpression of Foxp3 gene compared to those with a low grade (grade I and II). This result correlates with the study reported by Wang et al., that showed that strong expression of Foxp3 is linked to a poor prognosis for patients (Wang et al., 2014).

Regulatory T cells have been widely described in several cancer types, but their value as predictors of disease outcome is debatable in glioblastoma. Independent researchers described that there is an increased infiltration of Foxp3+Treg in advanced grades of various brain tumor types, including glioblastoma [19, 20].

V-domain Immunoglobulin suppressor of T cell activation (VISTA) is a recently discovered new Immunoglobulin (Ig) superfamily ligand [13]. VISTA expression is observed in the majority of immune cells, including CD4+ and CD8+ T cells, NK cells, macrophages, DCs and neutrophils, but not B cells [21]. In this current study, VISTA mRNA was highly expressed in advanced glioma grades. The elevated expression of both genes (Foxp3 and VISTA) suggests that regulatory T cells strongly infiltrate VISTA-expressing advanced grades of human gliomas, which may lead to glioma progression.

One main way of immune cell suppression involves the secretion of inhibitory cytokines such us IL-10 and TGF-β [22]. Using The Cancer Genome Atlas "TCGA", we attempted to explore their expression in glioma patients according to different parameters and in correlation with Foxp3 and VISTA. The expression of these 2 potent inhibitory molecules was significantly increased in patients with high grade gliomas. Their presence in the glioma microenvironment could be explained by their immune suppression ability. TGFβ can inhibit the expression of MHC classe I and II molecules in glioma cells, which allows tumor cells to invade surrounding tissues without being detected by immune cells [23]. IL-10 negatively regulates MHC class II molecule expression on monocytes and positively regulates the PD-L1 checkpoint molecule on glioma-associated macrophages [24]. Also, it inhibits the production of IFN-γ and TNF-α by immune cells [25], which causes energy and apoptosis of T cells [26, 27]. Overall, these data would explain the invasive potential of glioma cells.

Regarding immune checkpoints, the positive and significant correlation between the expression of Foxp3 and VISTA has been described by DiDomenico et al. [28]. In the case of sarcoma, overexpression of VISTA inhibits antitumoral immunity, and the blockade of VISTA effectively inhibited tumor growth by decreasing Treg cell and increasing CD8+ and CD4+ effector T cell infiltration in tumors [29]. We also detect a significant improvement in survival for patients with low expression of VISTA and foxp3 compared to those with high expression of VISTA and Foxp3. Wang et al. demonstrated that in the presence of TGF-ß, VISTA Ig promoted partially the differentiation of iTreg, and that this effect could be observed in both murine and human CD4+ T cells [14, 30]. Interestingly, blocking VISTA in tumor cells improved the survival of mice that were inoculated with VISTA-overexpressing ovarian cancer cells, although combined therapy using anti-PD-1 and anti-VISTA did not further enhance mice survival compared to anti-VISTA treatment alone [31].

In summary, our data revealed a correlation between VISTA and Foxp3 expression with glioma progression in patients. This study also indicated that VISTA and regulatory T cells could represent a bad prognostic factor in gliomas, and pinpoints VISTA and Foxp3 as a possible new therapeutic target, especially in advanced stages of gliomas.

The Authors declare that they have no conflicts of interest.

This work was supported by the Moroccan Ministry of Higher Education and Research and The National Center for Scientific and Technical Research (CNRST) through a “PPR1” project coordinated by A.B. A.G. was supported by a “CNRST” fellowship.