The Quantified Motion Analysis (QMA) has become in recent years a clinical examination whose understanding and improvement are being developed. Based on a three-dimensional projection of the body segments, the QMA must define these segments and their means of union, the axes and centers of articular rotation. Two main techniques exist: predictive estimation techniques and functional techniques which use a calibration movement to estimate the axes and centers of rotation. These latter techniques, known as functional, seem to show superiority in terms of reproducibility of the estimate of the axis of rotation of the knee, but no consensus exists. The same applies to the calibration movements used.

Human movement has fuelled the thinking of scientists since Aristote's first observations. The walk represents, according to Carcreff et al [1], the most studied motor activity. It is indeed the most repeated movement and whose analysis is facilitated by its cyclical aspect. The evolution of technologies has made it possible to develop techniques for the study of movement, offering the possibility of quantifying gait according to different aspects: quantified motion analysis (QMA). This information will facilitate the identification and understanding of walking disorders and their causes for clinicians in order to improve the therapeutic recommendations according to DeLuca [2].

One of the key questions of this clinical examination is its reliability and the reproducibility of its results. According to Nair et al [3], precisely defining the articular centres is the prerequisite to guarantee the accuracy of the calculation of the kinematic and dynamic parameters during the QMA. Despite technical progress, there are errors inherent in calculation methods or models as well as in motion capture systems [4-6]. Della-Croce et al in 2005 [7] show that the calculation of articular centres is associated with errors due to the improper localization of skin markers, with inter-operator differences of up to 20mm, even in experienced operators. In addition, the relative movement between the markers and the underlying structures (soft tissue and bone) introduces errors which compromise the estimation of skeletal movement according to Peters et al [8].

The QMA is based on biomechanical principles. Indeed, for the study of movement, the human being is considered as a rigid poly-articulated mechanical system, supposed to be undeformable, which can be broken down into several bones segments. In three dimensions, a segment is associated with a reference frame defined by three non-collinear points: a coordinate system. The coordinate system has an orientation and a position. The principle of modeling is to associate a reference point with each anatomical segment of the body. It is from these reference frames that we can calculate the movements of translations and rotations of the segments. The Vicon® Plug-in-Gait (PiG) model, used in most gait analysis laboratories, is the reference method. It applies a so-called predictive method in the calculation of the Axis of Rotation (AoR) [9].

To determine the centre of rotation (CoR) of the hip, the PiG estimates it using three (or four) markers located on the pelvis, with a stationary subject. From the hip CoR and, thanks to other markers on the thigh, the PiG estimates the knee AoR [5], then according to an equivalent method, that of the ankle. Therefore, errors in the proximal joints are passed on to the distal joints.

This observation is all the more marked in subjects where bone markers are difficult to identify around the pelvis, for example in overweight subjects. Neptune and Hull as early as 1995 [10] show that the results of these predictive approaches for hip CoR have been found to be inaccurate by around 20 mm compared to radiographic measurements. More recently, in 2011, the work of Sangeux et al found an average error of 30 mm in the PiG compared to an X-ray analysis [11] or via a 3D ultrasound system [12].

Chia and Sangeux explain in 2017 [13] that the measures of gait analysis are variable. The sources of variability can be intrinsic (between an individual's strides) or extrinsic. Extrinsic variability corresponds to the variability of the gait analysis measurement process, for example the replacement of markers between sessions and between assessors, or different marker placement protocols and treatment processes (such as estimates of axes and articular centers).

Leardini et al (1999) demonstrated that CoR and AoR can be determined more precisely by so-called functional methods [14], using joint mobility. The AdR are therefore determined independently of each other and are freed from the precision of the placement of the skin markers according to Schache and et al [15]. These techniques are distinguished in two categories as explained by Ehrig et al [16]: 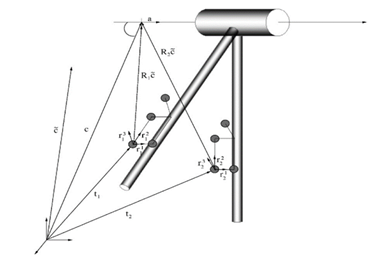 Figure 1: Diagram illustrating the construction of the coordinate systems and the axis of rotation of the knee from Ehrig and et al [20].

Several studies have shown the superiority in terms of reproducibility and reliability of functional methods compared to predictive methods in estimating joint centres, including that of Fiorentino et al [ 21] or Sangeux et al [11, 12]. Taylor et al [22] explained that transformation techniques gave more stable results than other techniques for estimating ADR in the context of the knee. However, the literature highlights the fact that all these methods remain subject to error due to skin movements. However, this error can be reduced by adding to functional techniques, an algorithm making it possible to reduce the noise of skin movements, such as, for example, the Optimal Common Shape Technique (OCST) introduced by Taylor et al in 2010 [22]. The functional methods to which the authors refer involve capturing the movement of the subject's lower limb as he explores most of the mobile capabilities of the joint. Several models of movements have been proposed and according to a study by Camomilla et al [19], it would seem that the “Star-arc” movement (star movement then circumduction) shows the best reproducibility to determine the hip CoR via the SCoRE method. To our knowledge, there are only few studies exploring the optimal calibration movement for the estimation of knee AoR.

If the literature tends to show that functional methods have a reproducibility advantage over predictive methods, there is no consensus on the positioning of knee AoR. There are some data proposing a mapping of marker placement [23, 24] but these combinations require a very precise placement of the markers (notably on anatomical landmarks) or a large number of markers, which is not suitable for clinical practice and could be deepened. Indeed, Besier et al (2003) [25] explain that functional techniques have better reproducibility in the definition of knee AoR, because it has the advantage of overcoming the precision of locating landmarks bony. This assertion is supported by the work of Sangeux [26] who finds in his 2018 study that the methods of functional knee calibration are significantly more reproducible than the conventional method between sessions of the same assessor. In a study published in 2016, Colle et al [27] compare several functional methods for estimating knee AoR and explain that the SARA transformation technique makes it possible to obtain the most stable and therefore most reproducible results. The choice of the use of this estimation technique is justified.

If the use of the SARA technique for the estimation of knee AoR finds justification in the literature, there does not seem to be a consensus as to the calibration movement that allows the best reproducibility of knee AoR to be obtained. The knee flexion movement between 0 and 20 ° of flexion essentially consists of the rotation of the femoral condyles on the tibial plateau on the sagittal plane. From 20 ° flexion, the translation is added to the rotation, but due to the non-symmetry of the femoral condyles and the tibial glenoid cavities, a medial rotation takes place in the transverse plane. The complexity of the knee flexion movement is therefore accentuated from 20 ° of flexion, thus modifying the instantaneous centres of rotation each time the amplitude changes. The definition of the AoR is therefore supposedly more difficult from this bending angle of 20 °.

It is easy to assume that larger movements could improve the accuracy and reproducibility of the estimate of knee AoR by the time it takes to travel it. The more time it takes to complete the movement, the longer it takes to measure, thus allowing more data to be collected. The same would apply if the instruction given to the subject was to perform a slow movement, but the variability in the realization of the calibration movement between individuals could compromise the reproducibility of the AoR estimate. In 2018, Sangeux [26] shows that functional calibration presents more reproducible results for predictive methods only when the knee flexion is greater than 20 ° but when the total range of motion is reduced (without specify the amplitude). However, Sangeux's study is done on a calibration during walking by varying during this initial angle of flexion of the knee.

In a 2014 work, Reichl and Ongaro [28] study different calibration movements to estimate the knee AoR via SARA: the squat movement, that from rowing and that from cycling. It turns out that the authors show that the squat movement between 35 and 65° of knee flexion gives the least stable results of the estimation of the AoR compared to other movements that study flexion movements between 60 and 90° of flexion. They attribute this difference to the fact that the squat is a free movement while the other two are machine-guided movements. The question of the value of using a guided movement to estimate the AoR of the knee before QGA may arise, but would increase the costs and the time taken for the examination. In clinical practice, there is the problem of the subjects' articular mobility and their ability to achieve the required movement. In fact, the quantified gait analysis is aimed at a population, whose gait may present deviations from physiology, including knee flexum or recurvatum. This work tends to show that the calibration movements allow greater reproducibility of the knee AoR if they start at 0 ° extension. What about patients who start the flexion movement from hyper-extension or who have lost total knee extension capacity. Human walking is made up of an alternating phase where the lower limb is in support and where it is in the air. The study of calibration movements is limited here to the closed chain that is to say that the subject's feet touch the ground, in a squat movement. The question of the interest of proposing calibration movements in open (or mixed) chain arises, in order to reproduce the so-called oscillating phase of walking as described by Passmore and Sangeux in 2016 [29] without mentioning the superiority of a such calibration movement in relation to the squat movement.

In QMA, kinematic and dynamic analysis is subject to the estimation of the centres and axes of rotation of the observed joints. This estimate must be as reproducible as possible so that clinically extrapolated data, such as kinematic values, make sense. In fact, the functional and predictive methods of estimating the centres and articular axes were created in asymptomatic subjects and do not take pathologies into account. It would be interesting to compare the estimation of the axes of rotation by these different methods in subjects suffering from arthritis pathology. The definition of the axis of rotation of the knee would also make it possible to know, for the patients having benefited from a knee arthroplasty, if the surgical technique allows the restoration of the functional axis of mobility or not, explaining the painful clinic sometimes persistent. The literature has fixed a threshold for error in the location of the hip joint centre at 30 mm, beyond which there is significant inaccuracy in the estimation of the hip joint centre [21]. The literature has not yet revealed the existence of such a threshold of imprecision applicable to the knee joint.