Iterative lesions of the soft parts around the knee are critical clinical situations involving the functional prognosis of the joint, especially in the presence of a total prosthesis. We present three clinical cases treated with the medial gastrocnemius muscle flap. It is a simple, reliable, fast flap, not sacrificing major vessels or leg, easy to remove, large volume, covering the anterior side of the knee and with a good functional result with minimal risk of infection and a very acceptable prosthesis survival rate.

The main objective of total knee prosthesis (TKR) is to restore the lost function of the femorotibial and patellofemoral joints. Among the feared complications, such as loss of skin substance or necrosis, these are dramatic, as they threaten the prognosis of the joint in the short term and call into question the effectiveness of prosthetic replacement [1]. In case of indications of flap coverage, muscle flaps are most often preferred. Here we present a technique for limb rescue using an internal gastrocnemius flap. This is a simple, reliable, rapid flap, which does not sacrifice any major vessels or leg muscles, is easy to remove, and is large enough to cover the anterior aspect of the knee [2-4]. We present three clinical cases treated with an internal twin flap for the repair of substance loss in the knee in case of total knee prosthesis PTG. The aim is to specify the technical particularities and indications for the use of this type of flap.

The operation was performed under general anaesthesia and in supine position under pneumatic tourniquet at the root of the limb, with the insertion of a thick cushion raising the contralateral buttock. The knee joint space, the posterior midline of the calf, the medial malleolus, and the posteromedial border of the tibia were identified. The design of the flap was as follows: behind the posterior median line, in front of a line passing 1 cm behind the posteromedial border of the tibia. The flap went down to 5 cm above the medial malleolus, the pedicle went up to the knee joint line. 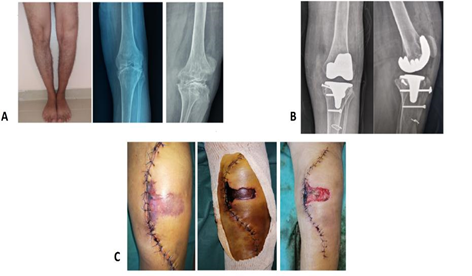 Figure 1: Patient 1: Clinical and radiological assessment before the flap.

After necrosectomy and cleaning of the residual cavity with bacteriological samples (Figure 1C), the skin was incised at 4 TDD behind the 15 cm long tibial crest, followed by a subcutaneous incision, taking care to leave out the sural nerve and the short saphenous vein, the deep muscular fascia was then incised between the relief of the two gastrocnemius at the intersection of the obliquity of the fibres of the medial gastrocnemius and the lateral gastrocnemius (Figure 2A). 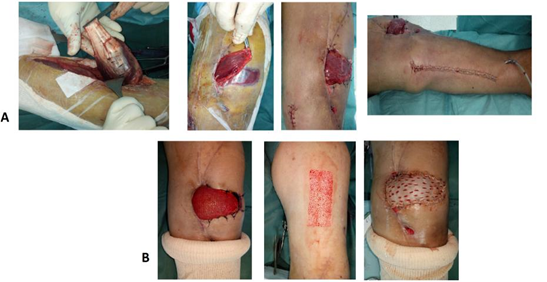 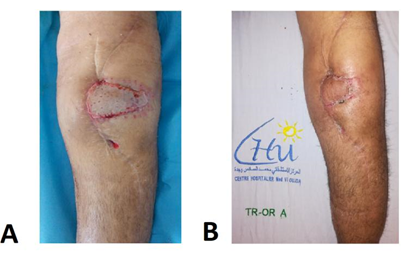 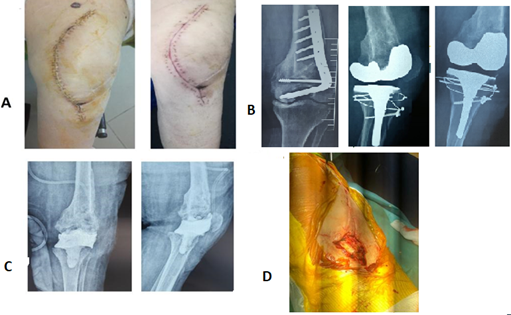 Figure 4: Patient 2: Clinical and radiological assessment before the flap

The Achilles tendon had to be respected at the bottom as much as possible in order to avoid scarring problems. As soon as the flap was lifted, it was prudent to secure the subcutaneous tissue and the muscle fascia with a few stitches. The flap was lifted upwards towards the knee joint; the vasculo nervous pedicle then appeared on the deep side of the muscle, the muscle was denervated to avoid contraction. Indeed, denervation, far from being systematic, is recommended in view of the risks of pain, contractions, dehiscence of the sutures, or excessive volume of the fleshy body. 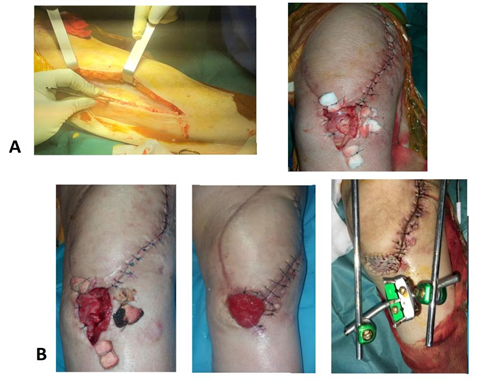 In order to obtain an adequate length, the medial gastrocnemius was released from the post internal condyle, taking care not to damage its proximal pedicle, and then scarring of the fascia of the deep face of the medial gastrocnemius was performed by severing the crow's feet (Figure 2A). Subsequently, the flap was passed under the fascia to cover the residual cavity and also the anterior part of the knee, which was well budded (Figure 2A). Multiple scarifications were performed, allowing the flap to "expand". Then points of skin approximation to the flap were established. A skin closure by direct suture in 2 planes (fascia, dermis) at the donor site was then achieved without difficulty thanks to the elasticity of the paddle and the large surface area of the flap.

Drainage was ensured by aspirating redons. The tourniquet was then deflated to check the viability of the flap, which should be bleeding. Passive movements were allowed from the outset on the 5th day and on the 15th day for active mobilization. The patient was then transferred to the rehabilitation centre. This muscle flap was grafted in thin skin, 15 days after a budding phase, for aesthetic reasons (Figure 2B).

Between 2018 and 2020, 3 patients from the Mohammed VI Oujda University Hospital (Morocco), treated in the orthopaedic trauma department A, were operated on by internal gastrocnemius twin flap for a cutaneous scar defect after knee arthroplasty. Patients included had skin necrosis or disunion following arthroplasty. The criteria studied were the age of surgery, sex, and indication for the prosthesis, time between arthroplasty and flap, presence of sepsis on the prosthesis, postoperative complications, and survival of the prosthesis (Table 1).

All of our patients were over 50 years of age and therefore belonged to the age group that is least likely to heal well after a knee replacement. Two men and one woman underwent knee replacement surgery at an average age of 60. Both men presented post-operative necrosis (Figure 2A), with an average of 3 weeks between arthroplasty and necrosis. The patient's risk factors are diabetes, obesity, and a knee that was multi operated on 2 ways, medial and lateral knee approach (Figure 4). In addition, one of the two men had undocumented knee surgery (probably arthrolysis of a stiff knee) with no other associated risk factors.

For the woman, disunion of the approach was developed 4 weeks after insertion of the prosthesis. All three patients received an internal gastrocnemius (gastrocnemius) twin flap on average 1.5 months after arthroplasty (Figure 2b-5). This procedure was performed in all cases by the same orthopedic surgeon. Skin healing was obtained 18 to 21 days after skin grafting (Figure 3) and no complications were observed between the 2 surgical steps. Functionally, only one knee prosthesis was septic, an ablation with antibiotic spacer placement was performed, with an internal twin flap. The patient was placed on antibiotic therapy (Table 1) with an unfavourable evolution, hence the indication for arthrodesis in a septic environment by the external fixator, and 2 X-shaped sterman nails (Figure 2B) were placed (Figure 2B). Both men left the hospital completely healed. Three weeks after the flap, they were able to walk without pain or functional impact. Up to now, both prostheses were retained, so we performed a Kaplan-Meier survival curve that reports a prosthesis survival rate of 72% at 14 months. The mean IKS score was 95 (45-130 points). The mean overall KOOS score was 54 (25-77 points).

The main objective of total knee prosthesis (TKR) is to restore the lost function of the femorotibial and patellofemoral joints. Among the feared complications are losses of skin substance or necrosis, which are dramatic because they threaten the prognosis of the joint in the short term and call into question the effectiveness of prosthetic replacement [1]. Beyond the simple techniques that every surgeon masters, the establishment of a real therapeutic strategy is necessary to effectively treat this type of lesion. To do this, the orthopaedic surgeon must analyse the possible causes leading to a skin lesion on a prosthesis, in order to be able to plan the operating sequences, to heal the skin lesion and maintain a favourable future for the prosthetic joint. Afterwards, this strategy should also be used as a preventive measure when planning a total knee prosthesis replacement [5, 6].

The use of reconstructive surgical procedures in knee surgery is common, especially in the revision of knee prostheses [7, 8]. The reliability and type of vascularization of the medial or lateral gastrocnemius muscle flaps [9] make these solutions frequent and commonly performed by orthopedic surgeons not specialized in reconstructive surgery. The medial head of the gastrocnemius muscle has Mathes and Nahaï type I vascularization, and its constant vascular pedicle is located opposite the approach required for its removal. The muscle flap of the medial gastrocnemius head is easy to dissect, simple to remove, and can alone treat the majority of anterior knee substance loss, including patella, patellar ligament, and tibial tuberosity. It is the flap of choice in GTP reconstructive surgery [2, 3-4].

The number of its advantages almost overshadows its few drawbacks. It is a reliable flap, even in the elderly; it has consistent vascular anatomy and good pedicle size; it is easy to dissect; the after-effects of harvesting are functionally negligible [10]; similarly, the aesthetic after-effects of harvesting are acceptable as a muscle flap; it can be combined with other regional flaps. As in patients with a history of several knee scars (our female case) and in whom arthroplasty is planned, gastrocnemius flaps can be used at the same time as the prosthesis to avoid any scarring or necrosis, ensuring safe and adequate coverage for early mobilization.

The only drawbacks we see are linked to its use as a musculocutaneous flap (thickness, reduction of the arc of rotation, aesthetic after-effects). It remains the reference flap mainly for covering the loss of substance in the knee, the proximal third of the leg, where it does not require any particular artifice [11]. The gastrocnemius can restore the function of the knee's extensor apparatus after injury to the quadricipital tendon or patellar ligament [12]. The study by Johanna Chan Yu King et al [13] has shown that muscle flaps perform better than fascio-cutaneous flaps in terms of survival without GWP reoccurrence, infected, with loss of substance and should be used predominantly in this context. Other flaps can be used as a cover flap including the lateral gastrocnemius muscle flap especially in antero-external knee substance loss, but its narrow size and more delicate removal than its medial counterpart makes it considered [03]. In total, the management of skin and soft tissue loss after total knee prosthesis requires a simultaneous understanding of the orthopaedic problems posed by the placement, removal or resting of the implant, the vascular anatomy of the entire knee region, and the techniques of flap covering surgery.

Cover surgery, using an internal gastrocnemius flap to cover post-arthroplasty scarring defects of the knee, provides a good functional result with a minimal risk of infection and a very acceptable survival rate of the prosthesis, must therefore retain its major place in the orthopaedic surgeon's therapeutic arsenal.