Introduction: Laparoscopic sleeve gastrectomy (SG) is an effective method for the treatment of obesity. Leakage is the most common and unfavorable complication of SG. Use of self-expandable metal stents (SEMS) has become the gold standard management. Aortoesophageal fistula (AEF) is a rare and life-threatening complication that can result from SEMS placement.

Discussion: Esophageal ulceration is a possible complication of SEMS placement and can lead to an AEF. In order to promptly identify and treat rare and fatal complications as AEF, it is important to always keep a high index of suspicion.

Conclusion: The awareness of rare complications as AEF after SEMS placement is important in order to facilitate immediate surgical treatment and to raise survival possibility. It is important to be familiar with all different treatment options, as well as being updated on the latest Guidelines. A good knowledge of timing and best treatment option, depending on the leak and patient clinical status, are mandatories.

Laparoscopic sleeve gastrectomy (SG) is a safe and effective method for treating obesity. Sleeve gastrectomy is currently the most popular bariatric technique, with more than 128 000/year procedures performed worldwide, according to IFSO Global Registry Report 2018 [1]. Despite the safety of SG, it can lead to some complications. The most common and unfavorable post-operative one, is leakage and usually occurs along the superior aspect of the staple line, just below the gastroesophageal junction [2].

A 52 year-old woman, underwent laparoscopic SG for morbid obesity (BMI 35.1) and related morbidities. Eight days after surgery she presented to emergency department (ED) complaining hyperpyrexia abdominal pain, shortness of breath and vomit. An initial evaluation showed normal vitals, leukocytosis with neutrophilia and high C-Reactive Proteine (CRP) levels. According to national Guidelines [5], a computed tomography (CT) of abdomen with intravenous and oral contrasts was performed and showed a 5x5 cm subdiaphragmatic fluid collection near the cranial portion of the gastric remnant and a 3 mm gastric leak. The initial management included broad-spectrum antibiotics and exploratory laparoscopy. The abdominal collection was removed and two drains were placed near the fistula.

In addiction, esophagogastroduodenoscopy (EGD) confirmed the presence of a 15 mm-fistula below the esophagogastric junction. A self-expandable long fully covered metal stent (SEMS) was placed between the distal part of esophagus and duodenum as well as a naso-jejunal tube for enteral nutrition.

Urgent EGD revealed active bleeding from the proximal anchorage of the stent with dislocation into the gastric cavity and blood clots. After several attempts of endoscopic SEMS removal, a laparoscopic converted to laparotomy surgery was necessary in order to facilitate the extraction and prevent gastric and esophageal iatrogenic injuries. Considering the contraindication of a new stent placement on a frail mucosa, following international guidelines [6-8], double pigtail catheter was endoscopically positioned through the gastric leak as an internal-internal drain as second-line treatment; no active bleeding was shown after the removal.

Few hours later a new episode of hematemesis occurred. The EGD showed a massive active bleeding with impossibility of endoscopic management. A Sengstaken-Blakemore tube was placed in order to temporarily manage the bleeding. Hypovolemic shock was managed according to validated protocols [9] till reaching a temporary hemodynamic stability. 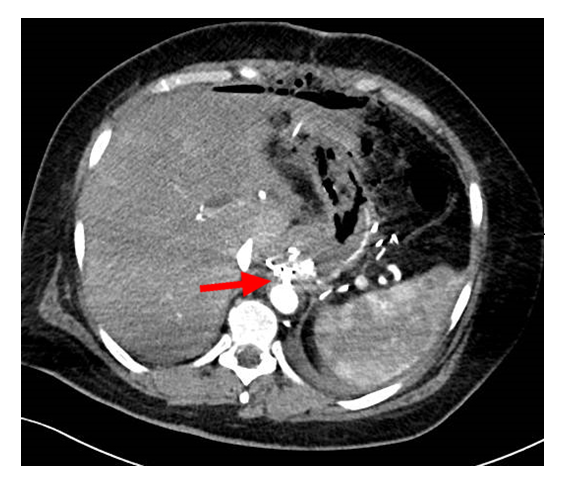 The procedure was well tolerated and effective and the patient was clinically and hemodynamically stable. The early post-operative was uneventful, with gradual increase of oral intake. The patient was evaluated by nutritionist, psychiatrist and physiatrist in order to guarantee an efficient nutritional, psychological and functional support.

CT of abdomen with intravenous and oral contrasts was performed eleven days after surgery and showed no evidence of gastric fistula.

EGD and CT were performed 3 weeks after surgery and confirmed the absence of fistula. Therefore the gastric pigtail was removed and the patient was discharged in good clinical conditions, normal laboratory tests and vitals.

One week later, the patient was admitted again to the ED for hyperpyrexia and high inflammation markers. Intravenous antibiotic therapy was started. CT of abdomen with oral contrasts showed intra-abdominal spreading and gastric fistula persistence.

In this situation a new surgical approach became necessary to convert sleeve gastrectomy into Roux-en-Y gastric bypass (RYGB); during the same surgical procedure an endoscopic pigtail was positioned into the gastric fistula.

One month later the patient was in good clinical conditions with good physiological functions and healed surgical wound. She was therefore discharged with prescription of outpatient’s controls.

Forty-five days after RYGB and endoscopic pigtail placement she was hospitalized for CT and endoscopic follow-up. CT of abdomen with intravenous and oral contrasts showed no evidence of intra-abdominal spreading and no leaks. The EGD showed the well-positioned pigtail in the gastric cavity, but revealed the aortic prosthesis at the distal portion of the the esophagus with no active bleeding as shown in Figure 2.

The patient was referred to Upper GI and Vascular surgery Center of Excellence. She underwent a total reconstruction of thoracic aorta with a prosthetic Dacron tube graft and esophago-jejunal anastomosis via a left thoracotomy.

After 21 days she was finally discharged in good clinical condition.

The early follow-up at 3 months was uneventful, with well tolerated oral food intake and no evidence of infection.

Thanks to its safety and efficacy, sleeve gastrectomy is the most common procedure performed worldwide in the management of the obesity epidemic [1]. Despite the advantages of this procedure, it can lead to serious complications.

One of the most common and bothersome is postoperative leakage. Its mean incidence is 2.1% (1.1-5.3 %) and it usually occurs along the superior aspect of the staple line just below the gastroesophageal junction. Leakage is the second most common cause of death after SG, with an overall mortality rate of 0.4% [2, 6, 8]. A leak can evolve differently, ranging from fulminant peritonitis and sepsis with multi-organ failure, to intra-abdominal collections and fistula formation [6]. For these reasons it is the most feared complication, responsible for most SG related morbidity and mortality.

In the current literature, different treatment strategies have been described for the management of leaks following SG. However, there is no consensus on the optimal treatment approach [6]. The management of staple line leaks ranges over endoscopic procedures, percutaneous drainage procedures and surgical re-interventions. Recently, good results have been achieved using a double-pigtail stent (DPS) for internal drainage of the gastric leak [7]. Actually, the use of esophageal long fully-covered self-expandable metal stents (SEMS) and self-expandable plastic stents (SEPS) is one of the favorite options. The overall success rate of stent placement for anastomotic leakage after bariatric surgery is estimated around 95%. As regards SG, this rate is slightly lower according to literature [3]. Complications of stent placement can include ulceration and migration (15%) [3, 8].

As shown in our case, another infrequent but possible complication of SEMS placement is esophageal ulceration that can lead to an A-E fistula.

It is mainly described as rare emergency and potential fatal complication of thoracic aortic aneurysm, aortic or esophageal surgery and malignancy [10,11, 12]. Even when a diagnosis of an aortoesophageal fistula is reached, the morbidity and mortality is high, reaching up to 40% [11].

No consensus has been reached on therapeutic strategy because of the rarity of the disease and the evolving therapeutic trends [10].

A combination of aorta and esophagus surgery is usually adopted for AEF. Actually, thoracic endovascular aortic repair (TEVAR) is the most common damage-control surgery for initial hemostasis, as a bridge to aortic graft repair or replacement and esophageal resection followed by gastroesophageal reconstruction with stomach roll or jejunum and colon in secondary reconstruction [10, 11]. As in our case, it was necessary after SG to perform esophago-jejunum anastomosis.

To our knowledge, the formation of an aortoesophageal fistula following stent placement for leakage after SG is a rare eventuality and only two similar cases have been reported in literature. Almadi et al. reported aortoesophageal fistula after stenting for a leak post sleeve gastrectomy. A graft of the diseased area was attempted but the patient unfortunately did not survive the procedure [11]. Boerlage et al. reported aortoesophageal fistula after esophageal stent placement in a patient with a Roux-en-Y gastric bypass. The fistula was successfully closed with an endovascular covered aortic stent. The gastric pouch and proximal jejunum were resected and a new gastrojejunostomy was created [12]. 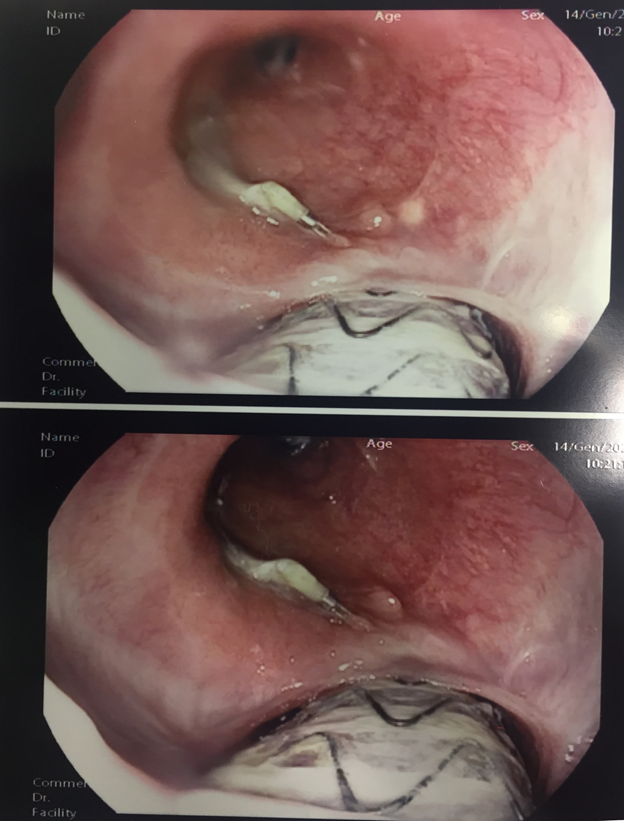 One of the most common SG complications is staple-line leakage. Nowadays, the use of SEMS has become the gold standard procedure for leakage management. Although it is not free from complications. In order to promptly identify and treat rare and fatal complications as AEF, it is important to always keep a high index of suspicion.

To prevent those adverse events, we must keep in mind that a good and reasoned leak management approach is crucial. Endoscopic procedures, percutaneous drainage procedures and surgical re-interventions are the three current available options. In this case, our first treatment option was a SEMS endoscopic placement and laparoscopies collection, drainage, as recommended in recent literature. Following bleeding from the proximal anchorage of the stent and dislocation of it into the gastric cavity, we proceeded to SEMS removal and a DPS was endoscopically positioned through the gastric leak as an internal-internal drain, as second-line treatment. Due to intra-abdominal spreading and persistence of gastric fistula it became necessary to convert SG into RYGB and during the same surgical procedure, an endoscopic pigtail was positioned into the gastric fistula.

Our case report underlines the importance for a bariatric surgeon to be familiar with all different treatment options, as well as being updated on the latest Guidelines. A good knowledge of timing and best treatment option depending on the leak, patient clinical status, surgical expertise and available facilities are mandatories. Nevertheless, advanced centers with laparoscopic skilled surgeons, intensive care units and specialized endoscopists are necessary in order to properly treat leakage, improving the patient’s outcome.