Purpose: The purpose of the present study was to examine the effects of long lasting chronic resistive training on circulating s-klotho s and IGF-1 levels in young adult.

Conclusions: It seems that long lasting resistive training did not influence circulating levels of s-Klotho, while the increased circulating IGF-I may, at least in part, mediate increases in strength, power and muscle hypertrophy.

Multiple growth factor signaling pathways are regulated by the s-Klotho protein, namely, insulin/IGF-1 [3] in mice, lack of brings about a reduction in life span accompanied with many disorders such in chronic kidney disease and aging [4], though, the opposite means increase longevity [5]. Similar anti-aging effects have also been ascribed to exercise and physical activity [6].

Resistance training targets specific muscle groups to increase strength. While there might be some crossover, with certain forms of aerobic exercise increasing strength and some kinds of resistance training, improving endurance, those benefits would be minimal compared to a targeted program. Several studies on rats and humans, suggest that resistance training has beneficial effects and can potentially be an effective treatment for various clinical conditions. [7,8]. Previously it has been found that long lasting aerobic exercise training increased circulating s-Klotho level [9]. However, to the best of our knowledge, the effect of long lasting resistive training on circulating s-Klotho and IGF-1 has not been investigated. Consequently, the present study tested the effects of long lasting chronic resistive training on circulating s-klotho and IGF-1 levels in young weightlifters.

Subjects: One hundred healthy young male adults were subjects in this study. Fifty were recruited as active young adults following chronic powerlifting resistance training at the national level for three or more years and, 50 age matched untrained young adult subjects (27.1±1.0 and 26.5±1.0 years respectively). All subjects were healthy by documented medical history and following a maximal exercise stress test to maximal oxygen uptake. The Burdick Eclipse 400 3-channel, 12-lead ECG recorder system, was utilized continuously to measure heart rate and to detect any electrocardiogram abnormalities. At rest and at peak exercise were acquired by five-second recordings. At rest and at peak exercise, the standard sphygmomanometer cuff and mercury manometer mounted at eye level, was used to measure systolic and diastolic blood pressures [10]. A written informed consent was completed and obtained from each subject, for taking blood samples and their medical records. The research was done following the approved by the Clinical Science Center Committee on Human Subjects by the guides of the Helsinki declaration.

Adipose fat assessment was performed as suggested by Behnke and Wilmore [11] which included measurement of total body weight (± 0.05 kg), skin fold thicknesses at 8 sites (± 1 mm) using the Lange Caliper and anthropometric procedures. Blood sampling and procedures: The sterile antecubital venipuncture techniques into ethylenediam-inotetraacetate (EPA) tubes were employed to draw 2.5 mL of peripheral venous blood samples. Time of day for blood sampling was kept consistent to control for problems associated with diurnal variation. Blood collection was obtained once from each subject.

Data is reported as mean ± SD values. One way ANOVA was performed, post hoc analysis was performed by using the Tukey 2 multiple comparison tests. The level of significance was set at alpha<0.05.

Subjects' mean descriptive data and physiological variables at rest are presented in Table 1. 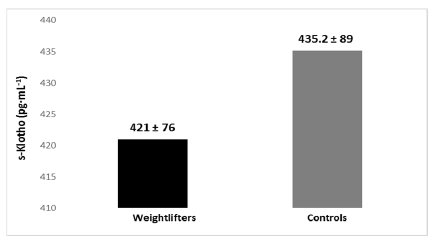 Figure 1: No significant differences was seen between the weightlifters and untrained subjects in s-Klotho.

S-Klotho a transmembrane is unconfined in the serum. S-Klotho is a result of another uniting of the Klotho gene, leading to a complex molecules seen in kidney patients [17]. Previously it has been suggested that the level of the IGF-1 receptor activity may be constrain by s-Klotho [18].

S-Klotho may target multiple secluded tissues and organs [17], containing a wide range of biological activities, including antiaging properties [6]. Previously it has been demonstrated that recombinant Klotho proteins of full length with the extracellular domain inhibit IGF-1 signal transduction, thus increasing longevity in mice [19]. Moreover, the blockade of IGF-1 signaling induced by the released form of Klotho has been shown to increase the resistance of oxidative stress, thereby improving survival [19].

Unlike chronic powerlifting resistance training, previous studies suggested that circulating s-Klotho levels have increased in response to chronic aerobic exercise training, and the response depends on fitness level [9]. Physiological responses differ depending upon whether they result from a pressure overload (weightlifting) and increased peripheral vascular resistance or from a total peripheral resistance such as during aerobic exercise [20].
Long lasting resistive exercise training performed against a sharp increased blood pressure (pressure response) provokes physiological change adaptations that increase strength, power, muscle endurance and times muscle hypertrophy. Aerobic exercise training has different physiological effects such decrease in heart rate and stroke volume, reducing blood pressure and maximal oxygen uptake. Additional benefits of aerobic exercise include an increase in fat utilization during exercise, facilitate the endocrine system and the immune system. It seems that resistance training that involves strength and power does not elicit an increase in s-klotho. It seems that mechanical loading in humans does not influence circulating levels of s-Klotho following chronic powerlifting resistance training, since the effectiveness of mechanical stimuli on muscle tissue depends on the type of contractions [21]. Earlier it has been shown that close relationships exist between s-Klotho and IGF-1 with s-Klotho inhibiting IGF-1 and insulin receptor, IGF-1R signaling by influencing both receptors by compelling tyrosine phosphorylation action [22].

While in the well trained subjects following resistance training s-Klotho levels remained unchanged, IGF-1 levels were increased. IGF-1 is generally thought to be associated with positive attributes such as growth, health, youth and wellbeing, yet the bulk of the scientific evidence suggests that signaling through IGF-1 and insulin receptors is related to a shortened lifespan in adults [16]. Reduced levels of IGF-1 in the working muscles may result in muscle dystrophy due to a dramatic decrease ability of the muscle to synthesize protein. IGF-1 has anabolic effects on muscle protein content by inhibiting protein degradation and promoting myogenesis. Consequently, the functional ability of IGF-1 in working muscles is limited [23]. In response to resistive training high plasticity of satellite cells is noted demonstrating that changes in the size of skeletal muscle fibers can be achieved without the addition of new myonuclei.

This study showed that chronic powerlifting resistant exercise training can cause a significant increase in IGF-1 concentrations. Bamman et al. [24] reported significant elevations in muscle IGF-1 mRNA following resistance exercise, particularly during eccentric resistance exercise. Previous research correlates with this study suggesting that resistance training, trained men, have shown to have higher resting IGF-1 concentrations than untrained men. [25]. The mechanism(s) responsible for resistive training to induce skeletal muscle hypertrophy is still blurred. However, some suggest that skeletal muscle’s IGF-1 has a significant role. Following an intensive resistive training, muscle damage ensues alters muscle’s IGF-1 activity, by increasing muscle protein turnover [25). This increase in protein regeneration is closely dependent on other muscle growth factors [26]. IGF-1 is known to stimulate myoblast proliferation and differentiation in vitro [27] as well as muscle protein synthesis [25] and, as such, researchers looked more into the factors affecting muscle hypertrophy. Besides its expression the effectiveness of muscle IGF-1 action dependents on the regulation of six IGF binding proteins and by the amount and availability of its receptor.

It seems that long lasting resistive training did not influence circulating levels of s-Klotho, while the increased circulating IGF-I may, at least in part, mediate increases in strength, power and muscle hypertrophy.