Neutrophil Lymphocyte Ratio is an Indicator of Coronary Artery Disease

Neutrophil Lymphocyte Ratio (NLR) is the sign of balance between neutrophil lymphocyte levels in the body and an indicator of systemic inflammation. NLR is a new predictor for cardiovascular risk and mortality. This study aims to assess the Neutrophil Lymphocyte Ratio (NLR) as a useful indicator for coronary artery disease (CAD). This case control study was conducted in the Department of Clinical pathology in collaboration with Department of Cardiology, Bangabandhu Sheikh Mujib Medical University (BSMMU), Dhaka, Bangladesh from March 2014 to February 2015. Total 134 patients were enrolled in this study who were waiting for further percutaneous coronary intervention (PCI) in the Department of Cardiology, BSMMU; 84 cases were considered as Group I (Patients with CAD) and 50 controls were Group II (Patients without CAD). A 2 ml of blood was collected in EDTA tube from the patients prior to PCI for complete blood count (CBC) were measured by haematology autoanalyzer, rechecked manually and NLR was calculated in the Department of Clinical Pathology, BSMMU. NLR was higher in Patients with CAD group compared to Patients without CAD (2.76 (±0.74) vs 1.56 (±0.15), p<0.001). NLR may be a useful marker to predict the presence of CAD.

Coronary Artery Disease (CAD) is an important public health concern worldwide and is the leading cause of morbidity and mortality. Atherosclerosis is a common cause of Cardiovascular Disease (CVD). Several mechanisms are likely to contribute to the accelerated atherosclerosis and increased Chronic Heart Disease (CHD) risk in patients. Important factors of premature coronary atherosclerosis include dyslipidemia, hypertension, hypercoagulability, poor glycemic control, smoking, obesity and lack of physical activity [1]. Inflammation plays a major role in all stage of atherogenesis and participates in the local, myocardial and systemic complications of atherosclerosis [2]. The relationship between various inflammatory markers and Coronary Artery Disease (CAD) has been established [3]. Among these markers, the levels of White Blood Cell (WBC) subtypes confirmed inflammatory markers that play a crucial role in the pathogenesis of atherogenesis and atherothrombosis, have received significant attention [4]. It has been established that the WBC count and levels of WBC subtypes not only play an important role in the development of CAD, but can also be used to predict the clinical outcomes of patients with CAD [5]. Neutrophil Lymphocyte Ratio (NLR) is the sign of balance between neutrophil lymphocyte levels in the body and an indicator of systemic inflammation [6]. NLR is a new indicator for cardiovascular risk and mortality and by which we can predict the risk of coronary artery disease [7]. This study aimed to investigate relationship between NLR and angiography proven CAD.

This case control study was conducted at the Department of Clinical pathology with the Department of Cardiology, Bangabandhu Sheikh Mujib Medical University (BSMMU), Dhaka, Bangladesh from March, 2014 to February, 2015.Total 134 patients were enrolled in this study. Among them, 84 patients with 50% coronary artery stenosis and more critical lesion who were diagnosed by Percutaneous Coronary Intervention (PCI) were considered as Group I (Patients with CAD) and50 patients with less than 50% coronary artery stenosis who were diagnosed by percutaneous coronary intervention (PCI) were considered as Group II (Patients without CAD). Recurrent myocardial infarction, patients with congenital cardiac disease such as shunt or vascular anomalies, pulmonary hypertension (both primary or secondary), acute or chronic infectious diseases, uncontrolled hypertension, known case of patients with cerebrovascular diseases, patients with documented malignancy, hematological disorders, patients with hepatic and renal impairment were excluded from the study. After selection, all the patients were thoroughly informed about the aims, objectives and procedure of the study and were encouraged for their voluntary participation. Then an informed written consent was taken from each subject. A detail personal, medical, occupational, educational and smoking history were recorded in a preformed data schedule and thorough physical examinations were done and documented. In this study patient’s complete blood counts were measured by haematology auto analyzer (SYSMEX 4000i), rechecked manually and NLR was calculated in the Department of Clinical Pathology, BSMMU. Laboratory investigations were done in Department of Clinical Pathology: CBC with PBF including differential count of WBC and neutrophil lymphocyte ratio (NLR). Serum lipid profile reports were collected from patient’s file.

Table 2 showing there was significant difference in Lipid profile between Group-I and Group-II (all p<0.001).

Determination of sensitivity and specificity of neutrophil lymphocyte ratio and Group-I (Patients with CAD) by ROC curve which is shown in Figure 2 and Table 4. Receiver-operator characteristic (ROC) curves of NLR also determines about prediction of Coronary Artery Disease (CAD). The test result variable(s): NLR (0.968) has at least one tie between the positive actual state group and the negative actual state group with sensitivity 98%, specificity 58%, 95% Confidence Interval of the difference lower 0.939 and upper 0.997. Then cut off value was 1.74. 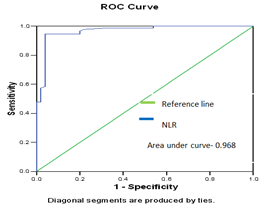 Figure 2: showing determination of sensitivity and specificity of neutrophil lymphocyte ratio (NLR) and Group-I (DM with CAD) by ROC curve.

Neutrophil Lymphocyte Ratio (NLR) is the sign of balance between neutrophil and lymphocyte levels in the body and an indicator of systemic inflammation [8]. NLR is a new predictor for cardiovascular risk and mortality. NLR could play an important role in early detection of atherosclerosis in diabetic patients and by which we can initiate early treatment [9]. Coronary artery disease occurs at any adult age, but it is the disease of middle and old age. In our study, the mean age of the patients in Group I (patients with CAD) was 54.73 (±8.94) years and in Group II (patients without CAD) was 53.10 (±9.47) years. Similar finding was observed in a couple of previous study [10-13]. There was clear male predominance in Group I (89.28%). In Group II there was 46% male. The difference was statistically significant between the groups (p <0.001). This finding was supported by related previous study [14]. They also found male predominance. They found that in patients with CAD group, male patient was 61.2% and in the other group male patient was 40%. There was also statistically significant association between the groups (p <0.001). Our findings are also similar with the results found in the previous study [7, 15-17]. Our lipid profile findings are similar with previous study [6,18-19].In this study, mean NLR in Group I was 2.76 (±0.74), whereas it was 1.56 (±0.15) in Group II. There was statistically significant association between two groups in this regards (p <0.001).This finding was supported by related previous studies [6]. They also found higher mean NLR in patients with CAD group (1.98±0.85 vs 2.69±1.74) (p <0.001). Another similar study also found higher mean NLR in patients with coronary artery disease (2.3 vs 1.6) (p<0.001) [7]. NLR can be a useful tool to detect and measure the future prognosis of CAD. In this study, we found a relationship between NLR and CAD proven with angiography and NLR is a useful indicator of presence of CAD.

Increased Neutrophil Lymphocyte Ratio (NLR) is a risk factor for developing coronary thrombosis leading to Coronary Artery Disease (CAD). With the help of NLR we can take preventive measure and precaution to reduce the risk of coronary artery disease. NLR is a simple, cost effective, readily available test and could be calculated easily to predict the risk of CAD and can take extra measure and preventive intervention to prevent CAD. It can also uses as a simple tool for indicator, prognosis and follow up of CAD.

No conflict of interest relevant to this article was reported.