Background: Few data are available about the role neutrophil to lymphocyte ratio (NLR) as an inflammatory marker in the early diabetic kidney disease (DKD).

Methods: An observational study involving 416 adult patients with type 2 diabetes mellitus (DM) from one center. The study aimed at investigating the relationship between NLR and urine albumin creatinine ratio (uACR) as a marker of early DKD.

Conclusion: NLR was found to be an independent predictor of albuminuria in patients with type 2 DM.

Diabetes Mellitus (DM) is a chronic progressive disease with a global economic burden related to its severe complications, which include micro- and macro-angiopathies [1]. Diabetic kidney disease (DKD) develops in 25-40% of diabetic patients and contribute to increased morbidity and mortality [2]. In the majority of patients, it can be detected and monitored by urine albumin excretion rate [3]. However, a significant number of diabetic patients can develop renal involvement, while maintaining normal albumin excretion rate, and a reliable clinical biomarker in these patients is lacking [4]. Therefore, there is a need to a more precise biomarker to improve early detection and hence, target protective measures to decrease disease progression.

The pathogenesis of DKD is not fully understood. However, there is a growing body of evidence supporting a role for chronic inflammation in both pathogenesis and progression. Chronic inflammation promotes development and progression of microangiopathy and macroangiopathy including cardiovascular disease [5-7]. A number of inflammatory markers were described in association with DKD such as tumor necrosis factor, cytokines, interleukin-1, interleukin-6 and interleukin-8 [8]. Leukocyte parameters such as neutrophil, lymphocyte, and total leukocyte counts are inexpensive, more readily accessible for use as inflammatory markers; however, unfortunately their values can be affected by physiological factors. The neutrophil lymphocyte ratio (NLR) was introduced as a relatively constant, and hence is considered superior to other leukocyte parameters to predict inflammatory status [9].

Several studies identified NLR as a meaningful predictor of vascular disease and clinical outcomes in various cardiac and non-cardiac disorders including coronary artery disease, cancer and other chronic diseases [10-12].

Adult patients (age equal to or above 18 years) with type 2 diabetes mellitus who had outpatient visits to the primary health care, endocrinology and general internal medicine clinics at King Abdul-Aziz Medical City, Ministry of National Guard-Health Affairs Jeddah during the period from 01 January 2017 to 31 December 2017 were eligible for inclusion. Recruitment continued until sample size was satisfied.

Patients were included if they had concurrent tests on both urine albumin excretion and complete blood count (CBC) with differential counts in any visit during the study period. Patients were excluded if they have malignancy, autoimmune disease, recent myocardial infarction within 6 weeks, blood diseases that affect neutrophils and lymphocytes (e.g. myeloproliferative disease and leukemia), diseases or medications that affect urinary protein excretion other than diabetes mellitus (glomerular disease other than diabetic, urinary tract infection, regular intake of non-steroidal medications) and diseases that affect the renal blood flow (renal artery stenosis, liver disease and hypovolemia). Patient on systemic or topical steroids or anti-inflammatory drugs during the data ascertainment or patients with overt nephropathy with urine protein of >1000 mg per 24 hours or urine albumin creatinine ratio of >100 mg/mmol or urine protein creatinine ratio >100mg/mmol, chronic kidney disease (CKD) with estimated glomerular filtration rate (eGFR) <60ml/min, leukocytosis (WBC >10 x 109 per Liter) were also excluded from the study.

In a cross-sectional study, we collected patients’ information from electronic medical records and included data on demographics, patient characteristic and data related to blood investigations: CBC with differential count, renal function tests, eGFR, lipid profile, hemoglobin A1C (A1c) and urine albumin to creatinine ratio (uACR). The NLR score was obtained from the differential counts of the CBC by dividing the neutrophil by lymphocyte count. Albuminuria was tested by uACR, the currently recommended method by American Diabetes Association and national kidney foundation to screen for early DKD [13]. Urine Albumin to Creatinine Ratio (uACR) is calculated by dividing albumin concentration in milligrams by creatinine concentration in mmol measured from a spot urine sample.

Result of albumin excretion was defined as:

To detect a relevant simple correlation of 0.15, with 5% significance level and 80% power, a total sample size of 347 patients was calculated. Data analysis was performed by the Statistical Package for Social Sciences (SPSS version 24). Continuous data were expressed as mean (±standard deviation) or Median (with interquartile range) according to distribution. Categorical variables were presented as frequency and percentages. Comparisons of continuous variables were conducted using the student t-test, Analysis of Variance (ANOVA), Mann-Whitney U test and Kruskal-Wallis test according to variable distribution. Associations between the variables were explored using the Pearson correlation and Spearman’s rho (for data not normally distributed). Binary logistic regression analysis was also performed to define variables associated with albuminuria. Receiver Operating Characteristic (ROC) analyses were conducted to compare the performance and predictive power of the NLR for albuminuria. All through statistical analyses, a P value of <0.05 was considered significant.

Table 1: Characteristics of study population as per albuminuria diagnosis

All parameters are expressed as mean (standard deviation), unless otherwise stated.

*Data are expressed as number (%).

¥Significant different between the two groups.

Table 2 describes the characteristics of the four quartiles of NLR. Differences in quartiles were noted in total WBC count and uACR. A positive continuous correlation is noted for WB with higher levels observed with increasing NLR quartile. For uACR, significant difference between NLR groups is noted (p 0.004 by Kruskal Wallis test) in which higher levels of albuminuria were noted with higher NLR quartiles. 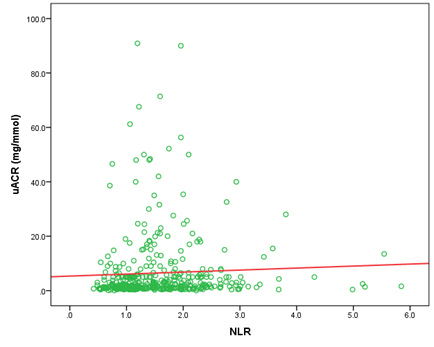 Figure 1: Scatterplot of the NLR as compared to uACR. The correlation between uACR and NLR Using spearman test: r2 0.156.

Table 2: Characteristics of study population as per the NLR category

All parameters are expressed as mean (standard deviation), unless otherwise stated.

*Data are expressed as number (%).

¥Significant different between the two groups.

Albuminuria is defined as uACR >3 mg/mmol 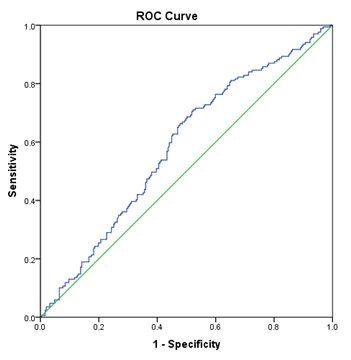 All variables are expressed as dichotomous.

In this study, we found that NLR levels were significantly higher in diabetic patients with albuminuria than in those without albuminuria. Moreover, the NLR was found as an independent predictor for albuminuria through logistic regression analysis. These findings support the current evidence for a role of inflammation in development of DKD. In their study that was published in 2015, Huang et al and his colleagues included 253 diabetic patients (115 with early DKD, 138 without DKD) and 210 control group. They concluded that increased NLR was significantly associated with DKD; and higher NLR may be a reliable predictor of early DKD [14]. Similar findings were observed with a few other studies but with smaller sample size [15-21]. We have included 416 patients (169 with early DKD and 247 without DKD) and confirmed a positive relationship between NLR and albuminuria. The levels of albumin excretion were found progressively higher with increasing quartiles of NLR from quartile 1 to quartile 3. Levels for quartile 3 and 4 were similar. This might be related to the fact that NLR and hence inflammation is related to development of microangiopathy and albuminuria is a markers for the same disease, rather than a linear relationship between the two markers. To reflect this more, the results of the spearman correlation, although positive, was weak in term of correlation as statistical term between the 2 continuous variables; albumin excretion rate and NLR.

In an attempt to define the clinical utility of NLR in comparison to albumin excretion rate, we conducted receiver operative characteristic analysis and defined the area under the curve which was 58%. NLR characteristics as a diagnostic test was examined in few studies in literature. In a study conducted from China, Huang and his colleagues included 312 subjects (134 diabetic with no DKD, and 187 diabetic with DKD) and defined NLR test characteristics [15]. Compared to Huang study, we have obtained somehow lower sensitivity (66.3% vs. 75.4%), but far much lower specificity (51.8% vs. 92.5%). One possible explanation for the lower specificity is the less stringent exclusion criteria we have used. In particular, diagnosis of heart failure, any myocardial infarction older than 6 months, urolithiasis were not part of our exclusion criteria; as they were with Huang et al 2017. In fact we have included 33 patients with cardiac diagnosis (but not myocardial infarction within 6 months) and that is 8% of the total study population. We did not search for diagnosis of nephrolithiasis. However, it is not the authors’ aim, in this paper, to present test characteristics as NLR is not introduced as diagnostic test, but rather as a non-specific inflammatory marker which can predict, or be associated with, the development of albuminuria.

Although our study has an advantage of good sample size and more robust statistical analysis to define test characteristics; it remains with limitations. Among important limitations relevant to our study and all similar studies, is the fact that we intended to investigate role of inflammation through use of NLR as inflammatory marker in the development of DKD; however, we used albumin excretion rate as a marker of disease development. This might stand true for majority of patients given the strong association of albuminuria with development of DKD and its utility as a predictor for future overt proteinuria and declining eGFR [22-25]. However two important points are to be considered. First, a subset of patients may develop early DKD before manifesting albuminuria [26-28]. Second, investigating levels of NLR against levels of albuminuria looking for continuous correlation holds true only if albuminuria levels correlate with amount of inflammation and hence degree of DKD in all patients. Therefore, it remains to be answered, if it is the mere positivity or the exact value of NLR test that really matters in the context of predicting early DKD. Another limitation relates to the retrospective nature of our study and the use of single tests for NLR making it difficult to ascertain all possible sources of bias and particular conditions other than DKD that might involve inflammation. We also have not found enough data on other inflammatory markers including C-reactive protein and erythrocyte sedimentation rate. Lastly, we have relied on the available uACR test over the 1 years predetermined study period, which turn out to be only one test is done for majority of patients including those with positive results. In fact, in this cohort, we recorded positive uACR being repeated within few weeks in only 94 out of 169 (55.6%) patients with positive test. Although we believe majority with positive uACR test have DKD given the overall rate of albuminuria of 41% in our cohort, a rate that is similar to published data [29, 30], it still remains a concern for the authors to exclude the patients with transient proteinuria. This raises a concern of making a misleading comparison for NLR with albuminuria which may be transient rather than a marker of early DKD.

Our study confirmed a significant and independent association between NLR and albuminuria in patients with type 2 DM. These results support the fact that DKD involves an inflammatory process and that NLR may be used as a predictor of this inflammation. Further research with a prospective design and multiple NLR measurements may shed more light on the role of NLR as a possible predictor for DKD.

AUC: area under the curve

We declare that we have no competing interests.

AA was responsible for the study design, data management, and manuscript writing. FK and SA helped with the acquisition and interpretation of data and with manuscript revisions. AA analyzed the data and took responsibility for the accuracy of analysis output. All authors read and approved the manuscript.