Department of Biochemistry and Biotechnology, College of Science, Kwame Nkrumah University of Science and Technology, Kumasi-Ghana.

In Ghana, there is an increasing prevalence of diabetes mellitus (DM) in the adult population, which stood at 3.35% by the end of 2013. About 8000 deaths were reported from diabetes in 2013. Changing dietary patterns and lifestyles are associated with the upsurge of DM and in Kumasi the prevalence is 9%. This work sought to determine DM prevalence and associated risk factors among adults in the Kumasi metropolis. The study involved 113 adults from the Oforikrom sub metro. Body Mass Index (BMI) were calculated from weight and height. Venous blood samples were collected for the determination of fasting blood glucose (FBG) using a spectrophotometer. Systolic and diastolic pressures were determined and socio-demographic data were collected using questionnaires. Mean age of participants was 41.8±1.3 years (females=44.9 and males=34.6, p<0.001), mean BMI was 27.3±0.6 kg/m2 (females=29.4 versus males=22.5 kg/m2, p<0.001) and mean FBG was 4.93±0.1 mmol/L (females= 4.97 versus males=4.84, p=0.55). Prevalence of hypoglycemia was 11.5%, normoglycaemia 74.3%, prediabetes 10.7% and diabetes was 3.5%. Close to 35% and 27% were obese and overweight respectively. More females were overweight or obese (82.3%) than the males (15%), p<0.001. Binary regression analysis showed gender as the only significant predictor of high FBG, with females having a 2.76 (95% CI 0.6, 12.7) increased odds of having high FBG compared to males. BMI, age, exercise, family history and diet were not significant predictors of FBG. In this population there was 3.5% observed prevalence of DM, similar to national prevalence, high prevalence of overweight and obesity, associated with female gender.

Diabetes mellitus is a metabolic disorder characterized by chronic hyperglycemia and disturbances of carbohydrate, fat and protein metabolism resulting from defects in insulin secretion, insulin action, or both [1]. In Ghana, diabetes and hepatitis is a major health challenge [2]. Diabetes is reported in over 354,000 adults, aged 20-79 in 2012 and 6,973 deaths were recorded as a result. It is further estimated that over 292,450 people have undiagnosed diabetes. The cost per person for healthcare with respect to diabetes was estimated at 141.76 USD [3].

A three year study by Danquah et al. [4] indicated that 6% of the people in Kumasi have type II DM. This study reveals advanced age, obesity, family history of DM, smoking and alcohol, lack of physical activity, poor nutrition during pregnancy, ethnicity and low income levels as the factors responsible for the disease. Studies revealed glucose abnormalities in people who smoke. It was concluded that smoking is a modified risk of type II diabetes [5]. The effects of diabetes is a long term development of retinopathy, nephropathy and neuropathy and an increased risk of cardiac, peripheral arterial and cerebrovascular diseases [3]. Diabetes increases the risk of death among individuals and is the sixth leading cause of death in the US in the year 2000. Adults with diabetes are prone to death or stroke. Other complications relating to diabetes include high blood pressure, amputations and complications in pregnancy [6]. The aim of this study is to determine the prevalence and study the risk factors for type II diabetes mellitus among inhabitants in some selected suburbs of Kumasi.

This study was a cross-sectional study conducted on adults living in Oforikrom Sub Metro (Kumasi-Ghana). A total of 113 participants were recruited for the study area. The participants of the study were selected randomly from the two communities (Susuanso and Oforikrom).

Participants recruited for present study excluded tertiary students living (temporal) in the locality as well as those below 18 years. Pregnant women and visibly sick/ill people were also excluded from the present study.

A sample size of 151 participants, which represented 0.5% of the total population was determined at a confidence level of 95% with an error margin of 7.98%. This was calculated using the Complete Survey Software Solution created by Creative Research Systems (2012). The sample population was chosen based on random selection of houses at the two communities. The participants were tested for fasting blood sugar at very hours of the day (before sunrise). Venous blood samples were collected after 8 to 12 hours of overnight fast for the determination of fasting

The results obtained were analyzed using the SPSS software, version 16.0. T-tests, tests for correlation, regression analysis and crosstab analyses were used to compare the various parameters and relationships.  The  p-values obtained are used to test for the significance of the results.

From Table 2, it shows that the mean age of the female is statistically higher than that of the male, also the DBP of females is statistically higher than that of males and it shows there is a significant difference between the mean of DBP of females and males. There was no significant difference in the mean of SBP, alcohol, and exercise for both males and females. However, there mean BMI was significantly higher in females than in males (p<0.05).

Figure 1 shows that there is a weak direct correlation between age and BMI, Age and FBS, and BMI and FBS. These associations are weak as the correlation coefficients are less than 0.5 (Spearman’s r =0.417) as seen in Figures 1, 2 and 3. The r square value obtained was also less than 0.5. 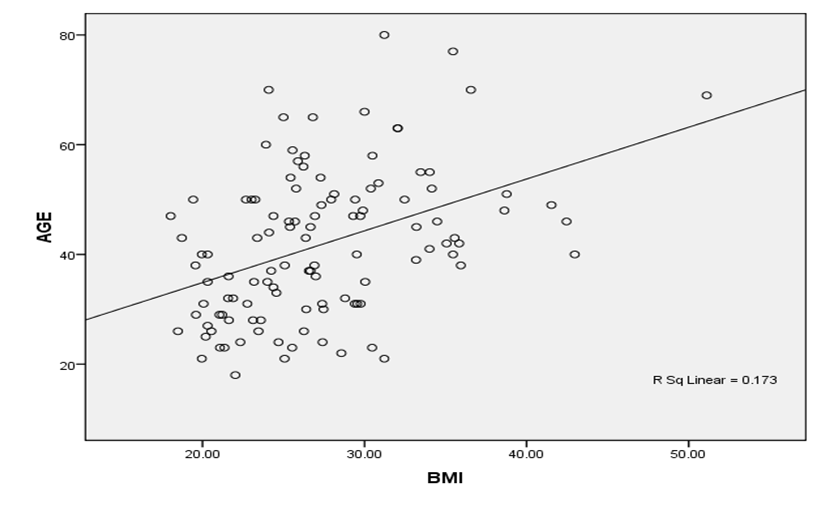 Figure 1: Correlation between Age and BMI 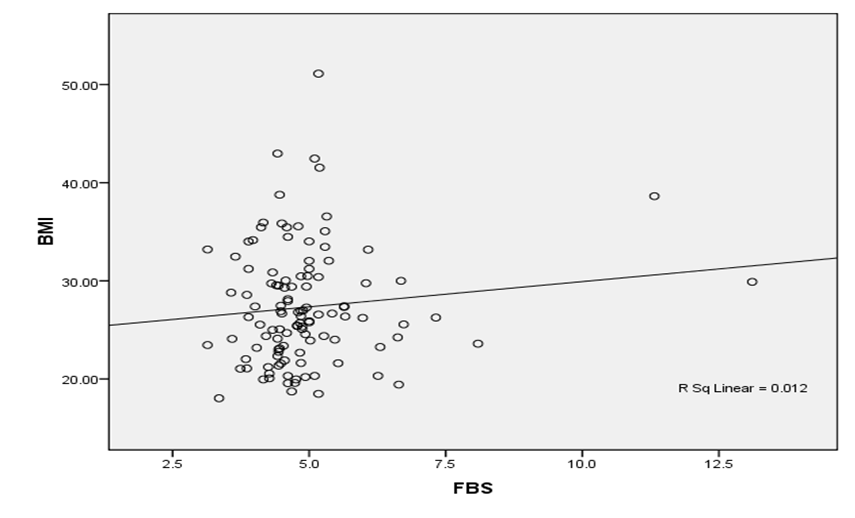 Figure 2: Correlation between BMI and FBS

Figure 3: Correlation between Age and FBS

Figure 4 shows no relation between the diets of the participants and the blood glucose. The R square linear values for the various dietary patterns were all below 0.5. The various R square values are varied diet (0.001), cereal and grains (0.002), diary animal (0.012) and some cereals and some grains (0,009). The r square linear values obtained for the various food diets were much smaller than the standard figure of 0.5, which indicate the degree of linearity.

The study revealed a prevalence of 3.5% for diabetes mellitus and 10.7%% of pre-diabetes. The prevalence of 3.5% of diabetes compares well with the national figure for Ghana of 3.35% by the International Diabetes Federation (IDF) in the year 2012 [3]. This figure was concluded based on the World Health Organization’s and IDF’s definition of fasting blood glucose of 7.0mmol/L and above as being diabetic. This prevalence cannot be associated with the risk factors of physical activity, aging, gender, obesity, dietary patterns and family history. This is because of the weak association between these factors and the fasting blood glucose results.

genders and it is inconsistent with other studies which indicated that more women are prone to the disease than males [8, 9].

The prevalence of pre-diabetes is a major concern for public health policy [1]. It is diagnosed when there is hyperglycemia which is not sufficient to be classified as diabetes. It is categorized as Impaired Fasting Glucose (IFG) or Impaired Glucose Tolerance (IGT) and it is diagnosed as fasting blood glucose between 5.6 and 6.9 mmol/L [7]. The pre-diabetic condition is a risk factor for the development of diabetes and other cardiovascular diseases [10].

The increasing trend in modernization has its own benefits and demerits. From the results obtained, it is evident that a sedentary lifestyle is associated with obesity and the development of diabetes [4]. The most useful way of expressing obesity is the body mass index (BMI). The index is the body weight divided by the square of the height in meters (weight/ (height)2). A BMI between 18.5 and 24.99 is considered a healthy weight and this is associated with lower risk of developing type II diabetes [13]. BMI of at least 30kg/m2 is defined as obesity and it is implicated in the development of diabetes and increased mortality [13, 14). For a BMI range of 35-50 kg/m2, the relative risks range from 2 to 8 for the development of type II DM and this contrasts with the low risk of people with healthy body weight [13].

There is an increasing sedentary lifestyle and obesity in most parts of Ghana especially in the urban settings [15]. In this study, the mean BMI for males and females are 22.5±0.4 and 29.4± 0.65 (p=0.00) respectively. The BMI is also dependent on the age of the participants. This was revealed with the positive correlation between age and BMI (p=0.002). This shows that the mean for females is significantly higher than that of the males. There is a high level of overweight in the study population as indicated by the prevalence of 34.5% and the prevalence of obesity is at 27.4%. This shows that more than half of the study population are abnormally heavy. The females are found to be overweight and obese than their male counterparts. This compared with similar findings reported in other studies [16].

The increased prevalence of obesity has been observed to be noted before a rise in the occurrence of diabetes, hypertension and other non-communicable diseases. The most notable risk of developing type II diabetes mellitus is

obesity and the risk attributed to obesity is as a much as 75% [17, 18]. This then shows that a higher percentage of the female study participants are prone to developing type II diabetes mellitus if measures are not put in place to reduce it.

In most studies relating the physical activities, roles in reducing diabetes, it was observed that the level of blood glucose reduces as people engaged in some of exercise regime [20, 21]. These studies were on people with the disease already and physical activity was used as a form of intervention to reduce the risk of developing the type II diabetes mellitus. It can be seen that physical activity alone does not prevent the development of the disease, but other factors play major roles.

For the people with pre-diabetes and diabetes, engaging in some sort of physical activity would help reduce the risk of developing type II diabetes. Involving in more physical engagements would help them improve on the sensitivity of the tissues to insulin action. This is linked to the regulation of body weight, decreased adiposity, glucose tolerance and fibrinolytic and endothelial function [20].

In order to associate the effect of the various dietary patterns on fasting blood glucose, a partial correlation test was done using the various diets of the study participants. The outcome showed that there is a positive association between the various diet patterns. But the association is statistically insignificant. This is because the various p- values obtained were greater than 0.05. A further analysis of the various diets and the fasting blood glucose was carried out. The outcome revealed that there is a weak correlation between the blood sugar and diets of the people. However, the relation is statistically insignificant as the correlation coefficient, r, was less than the 0.5. This indicated that the effect of diet was not pronounced. In contrast, literature indicated that the diet of people has a bearing on the fasting blood glucose. Studies by Salmerón et al. [22] and Montonen et al. [23] showed that consumption of foods rich in red meat, dairy products and high glycemic index is an independent risk of developing type II diabetes mellitus. The same studies also revealed consuming foods rich in fruits, vegetables and high cereal fibers are able to reduce the risk of developing type II diabetes mellitus [23].

The current study shows the association, but it is a weak relation. It could be due to the sample population being low, therefore not much data was available. It could also be that most of the foods consumed are cereal and grain based, thereby provide enough fiber for the consumer. High fiber from cereals and grains help reduce the demand for insulin after meal and increases the sensitivity of the target cells and tissues to insulin action [23].

It is concluded from the study that the prevalence of diabetes stands at 3.5% and pre-diabetes is at 10.7%. The study revealed that diabetes and pre-diabetes are not associated with age, gender and BMI. The prevalence is weakly associated with lack of physical activity, diet and family history of diabetes mellitus as well. The prevalence of obesity was found to be 27.4% and overweight was at 34.3%. This indicated that over half of the population are obese and overweight.

The authors would like to acknowledge the staff of the Clinical Analysis Laboratory of the Department of Biochemistry and Biotechnology, KNUST for their assistance in this project.