The Use of Allogeneic Leukocytes Infusion in Cancer Immunotherapy

Allogeneic transplantation was being used as a successful method for tumor therapy. Under the clear illustration of transplantation immunology, it is realized that alloantigen was an immunostimulator to elicit an immune effect in host vs. graft (HVG) or graft vs. host (GVH) 1]. In the GVH and HVG biology, there were similar mechanisms to antitumor effects, including cytolysis, antigen-presenting cells (APCs) revitalite, and IFN-γsecreting type T cells. So theses mechanisms might be used in the tumor therapy.

Graft rejection represents an immune effect which was persistent and intensity. In the allogeneic transplantation, the remarkable host T cell effect to allogeneic major histocompatibility complex (MHC) molecules. A recent study demonstrated the usage for the allogeneic reaction to induce the host weak T cell effect to caner Antogens [2]. This theoretical perspective develops an attractive immunotherapy method in the people with cancer. The response of graft rejection to elicit antitumor effect was illustrated in a clinical test of skin transplantation from HLA unmatched donors 3,4]. In the report, we illustrated the therapeutic potentiality of inactivation MHC unmatched allogeneic leukocytes to prevent GVHD. The prevention of GVHD made the donor cells to have a much higher disparity of MHC with host cells. Our study showed antineoplastic capacity elicited by MHC-unmatched allogeneic leukocytes transplantation.

2. Materials and methods
2.1 Mice and cell lines
Inbred female C57BL/6 (B6, H-2) and BALB/c mice (8-10 weeks) were purchased from the Experimental Animal Institute of Peking Union Medical College. All protocols were in accordance with recommendations for the proper care of laboratory animals.

2.2 Cell vaccine preparation
Murine splenocytes were separated from freshly spleens of BALB/c mice. For inactivating splenocytes, 25 mg/mL mitomycin C (MMC) were taken into the cell suspension in a concentration of 1×107cells/mL. And the cells were incubated for 60 min. At last the cell were washed with phosphate-buffered saline (PBS) and resuspended.

2.3 Cancer therapeutic protocol
On Day 0, mice were injected with 1 X 105 TC-1 tumor cells subcutaneously (s.c.). On Day 10, when the tumors grew approximately 50 mm3, the mice were divided into 3 groups as follows: the PBS control group; ALI groups (4×108, 2×108); On Day 11, the MMC-inactivated allogeneic leukocytes were administered intratumorally (i.t.) and repeated twice every 3 days. Tumors were monitored every 3 days, and the death of mice was registered. Tumor dimensions were recorded with calipers, and the record were inserted into the following formula:
tumor volume (mm3) = 0.52×(length×width2).

2.4 Statistical analysis
Student's t-test was used to compare means between the 2 groups. Logrank test were analyzed in the survival data. Differences were considered to be significant when p < 0.05. Statistical analysis was performed using commercially available software (SPSS 11.0). 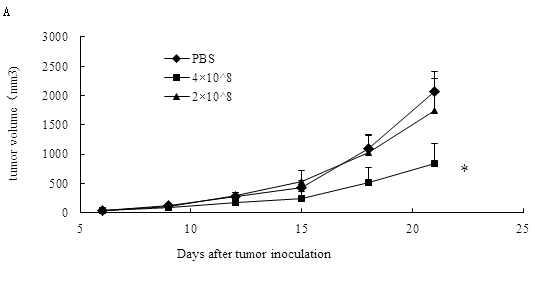 Figure 1: The antitumor effects of ALI. C57BL/6 mice were inoculated s.c. with 1 x105 TC-1 cells. When the tumors reached an average diameter of about 5 mm, the mice were randomized and treated with ALI or PBS on Day 10. The same treatments were repeated on Day 13 and Day 16. (A) Tumor sizes of B6 mice treated with 2 or 4 x 108 inactivated BALB/c leukocytes infusion. The results are demonstrated as mean ± SD. *p < 0.05 compared with PBS group on Day 21. (B) Survival of mice per treatment group. N= 6 mice/group.

Table 1: The median survival of mice in tumor immunotherapy

4. Discussion
The antitumor response of allogeneic leukocytes was illustrated in previous study [5,6]. All the previous studies were depends on the graft-versus-tumor or graft-versus-leukemia effect which mediated by competent donor cells [7]. In our study, we illustrated that an antitumor immunity could been elicited by an inactivated MHC mismatched allogeneic leukocytes.

ALI might elicit antitumor immunity in 3 methos. First, the anergic and tumor-specific T cells might be elicited in the polyclonal allogeneic response. Second, the CD4+T-cell direct allorecognition response to MHC-II molecules could afford T-cell help for the self-restricted reaction to cancer peptides. Finally, the inherent immune system might induce an immunostimulatory environment [8,9].

The another novel aspect of our study was related to a reversal of lymphopenia in a cancer bearing host. Our results showed that inactivated ALI could inhibit the cancer growth by inducing type-1 cytokine storm. These cytokines could induce both nonspeci?c and speci?c antitumor immune effect. In conclusion, it is sensible to desire the therapeutic modality might be an attractive method in cancer therapy.