With the development of assisted reproductive technology, more and more infertile people get pregnant, but with an increasing risk of heterotopic pregnancy (HP). HP is a pregnancy with at least two different implantation sites simultaneously. It is reported that the incidence of HP after in vitro fertilization (IVF) with embryo transfer (ET) is around 1% [1].

Intrauterine pregnancy combined with cornual pregnancy is one of HP, and its incidence after IVF-ET is about 1:3600 [2]. The diagnosis is mainly based on ultrasound. So far, there are no standard guidelines, and treatment for this disease is relying on the doctor’s experience and the patient’s decision.

However, few cases of HP after bilateral salpingectomy have been described. Here, we present a case of a cornual pregnancy with the development of an intrauterine single pregnancy in a patient who had frozen-thaw embryo transfer (FET) cycle after bilateral salpingectomy. The patient underwent surgical removal of the cornual pregnancy by laparoscopy in first trimester, and continued the development of the intrauterine pregnancy with one live birth after caesarean section. The literature is reviewed as well.

The patient was a healthy 40-year-old gravida 0 para 0 Asian woman treated at our reproductive center for primary infertility for 10 years. The patient had a history of recurrent implantation failures (RIF). The patient underwent first three conventional IVF cycles due to tubal factors in other hospitals. The stimulation protocol for these three IVF cycles is mild/mild/GnRHa long, which succeeded in obtaining 1/0/6 D3 embryos from 1/1/8 oocytes. Then the patient went through bilateral salpingectomy under laparoscopy owing to hydrosalpinx. After surgery, the patient had four FET cycles without a successful pregnancy. The patient continued her another two intracytoplasmic sperm injection (ICSI) cycle using mild stimulation protocol, and obtained 0/1 D5 blastocyst from 2/1 oocytes. Preimplantation genetic screening test was performed on the blastocyst, but biochemical pregnancy was acquired after FET cycle.

In August, the patient underwent HMG stimulation and FET cycle. One oocyte was obtained and used for conventional IVF. The patient took 20mg of dydrogesterone (Duphaston; Abbott) daily and plugged 300mg of progesterone (Utrogestan ?Capsugel) into vagina twice a day. Because of the RIF, two-step embryo transfer method was employed. Therefore, one D2 embryo (Grading 3c2) from fresh cycle was transferred. Three frozen D3 embryos (Grading 9c2,8c2 and 6c3) were thawed and cultured for blastocyst formation. Three days later, one blastocyst (Grading B1) was transferred, while other two embryos with development arrest (Grading Morula and 6c3) were discarded. Both the transferred embryos were placed at 10 mm from the fundus under transabdominal ultrasound guidance.

The serum quantitative β-human chorionic gonadotropin (β-hCG) was 693.8 IU/L at 12 days after second transfer. At 5 weeks 5 days’ gestation, there was a minor vaginal bleeding without abdominal pain. One day later, an ultrasound scan showed an intrauterine viable embryo (crown-rump length 8.6mm) and an irregular mixed mass of 33*29*28mm in the right of uterine cavity, in which a yolk sac like structure was found. The patient was then hospitalized and observed closely. Another ultrasound scan performed on 7 weeks 4 days gestation revealed an intrauterine viable embryo (crown-rump length 9mm), combined with a right cornual pregnancy (crown-rump length 6mm) with fetal cardiac activity. A laparoscopy was then decided on the same day.

Intraoperatively, a mass of about 4 cm size at the right cornua uteri was found (Figure 1). There was also a chocolate cyst with 1cm diameter in left ovary, while other abnormalities were not found in right ovary and the surface of other organs in 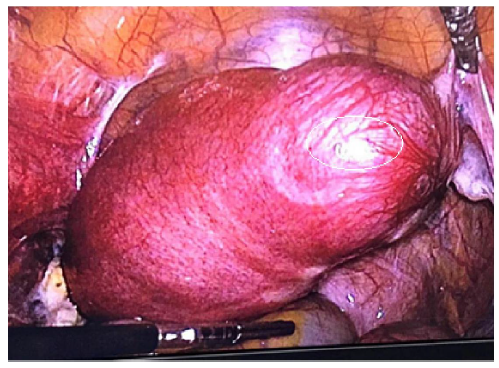 Figure 1: laparoscopy showed a mass (white circle) of about 4cm size at the right cornua uteri

upper abdominal cavity. Bilateral fallopian tubes were not found. Then laparoscopic resection of the cornual ectopic pregnancy was proceeded by transecting the right cornua uteri with bipolar coagulation to control bleeding. Gestationalsac, villus, organic tissue, blood clot were exposed and dissected out under ultrasonic monitoring. The right cornua uteri was then sutured. Bleeding was minimal. Ovarian cystectomy was also performed in the meantime and all resected tissues were sent to the pathology department. Meanwhile, the ultrasonographic finding suggested that the fetal heartbeat from intrauterine pregnancy was detectable. The villus tissue was confirmed histopathologically in the excisional biopsy of the mass from right cornua uteri (Figure 2). 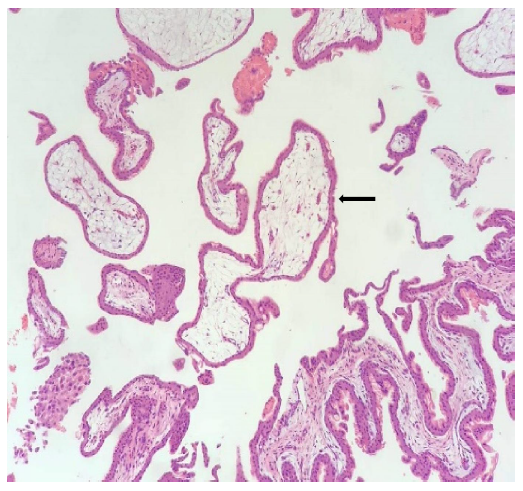 Besides, endometriosis was confirmed in the cyst from left ovary. Then, ultrasound scanning performed on one week after the operation showed progressive development of the intrauterine pregnancy. And, there were no maternal complications. Progesterone was discontinued from 10 weeks of gestation, and dydrogesterone was discontinued from 12 weeks of gestation. The patient was monitored very carefully during the whole gestation, and was hospitalized on 28 and 32 weeks of gestation for Dexamethasone to accelerate fetal lung maturation and Magnesium sulfate to protect cranial nerve. At 37 weeks 4 days of gestation, the patient suffered occasional and irregular pain of lower abdomen. Therefore, caesarean section was performed and one live healthy boy weighing 3440g was delivered. The examination of the uterus during the operation showed an old scar at the right cornua with a thin thickness of muscle layer (Figure 3). 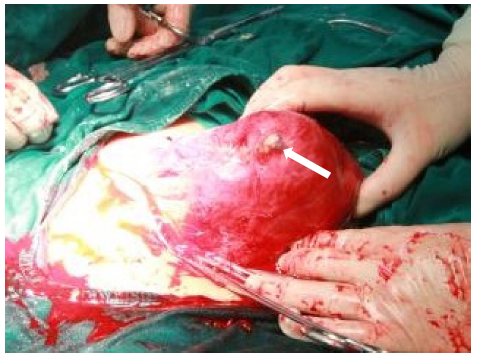 Figure 3: The examination of the uterus during the caesarean section showed an old scar at the right cornua (white arrow) with a thin thickness of muscle layer

The implantation site of cornual pregnancy is quite unusual. With the progression of gestation, the gestational sac could grow either towards or away from the uterine cavity, which is based on the blastocyst polarity [5]. Due to the thick myometrial layer surrounding the gestational sac, there is one report suggesting that cornual pregnancy in myometrium generally ruptured between 9 weeks and 20 weeks [6]. For those patients without typical clinical symptoms at early stage, if the gestational sac was located to the proximal side of uterine cavity at the cornua, expectant management could be chosen with closely monitoring its growth by ultrasonography. Most importantly, it is mandatory to inform the patient of high risk of rupture and complications and remain vigilant to react as fast as possible if associated symptoms appear, preparing the patient with the knowledge of possible emergency surgery. For those patients with higher gestation age of cornual pregnancy or with limited possibility of transition from cornual to intrauterine pregnancy confirmed by ultrasonography, it is recommended to terminate the pregnancy as soon as possible.

The management of concomitant intrauterine and cornual pregnancy include medical treatment, expectant management and surgery. Medical treatment is mainly the use of potassium chloride, concentrated sodium chloride and methotrexate in the ultrasound-guided reduction of the cornual gestation. The risk of rupture in expectant management is still high, which requires close monitoring. Surgery management includes wedge resection and cornual repair after removal of ectopic sac by laparotomy and laparoscopy. There is an increasing trend of performing surgery management in recent reports, and some studies showed conversion from laparoscopy to laparotomy intraoperatively in order to better control hemostasis and avoid heavy hemorrhage. However, controversy existed in surgery methods using either wedge resection or cornual repair after removal of the ectopic sac. Some studies suggested an increased risk of uterine rupture with subsequent gestation due to the damage of uterine structure after cornual resection, while others suggested that there was the possibility of potential residue after removal of ectopic sac only. We reviewed all the literatures and found no report showing neither uterine rupture nor continuous ectopic pregnancy, no matter which kind of surgery was. It has been summarized that the overall live birth rate for intrauterine combined with cornual pregnancy was 57.6% and increased to 64.5% in patients without clinical presentation when diagnosed. Meanwhile, this rate is similar to that of HP in general (66.2%). Furthermore, the live birth rate (60.9% vs 50%) was higher and abortion rate (13.0% vs 50%) was lower in those who had surgery than those who received medical treatment, despite rate of caesarean section is higher in surgery group. Even though there were some patients had thin myometrial layer at the cornua, none of them had uterine rupture [2].

There were 12 reported cases of heterotopic pregnancy after embryos transferred following bilateral total salpingectomy[7-18], (Table 1), all of which are found in patients with two or more embryos transferred during ART practices. Therefore, single elective blastocyst transfer is highly recommended, because it is mimicking physiological status more closely. Besides, the size of blastocyst is bigger than cleavage-stage embryo, which makes it more difficult to go to fallopian tubes backwards. Blastocyst transfer is the best choice to reduce the incidence of ectopic pregnancy.

It is essential to keep vigilant for clinicians to diagnose HP as early as possible due to the prevalence of ART. If associated symptoms like abdominal pain or vaginal bleeding appear, it is important to do systematic exploration by ultrasound scan, which can help the early diagnosis. The majority of the patients suffering from intrauterine and cornual pregnancy after IVF-ET require preserving intrauterine pregnancy. Therefore, it is recommended to systematically assess the effect and safety of the treatment for cornual pregnancy, and make individualized therapeutic plan. 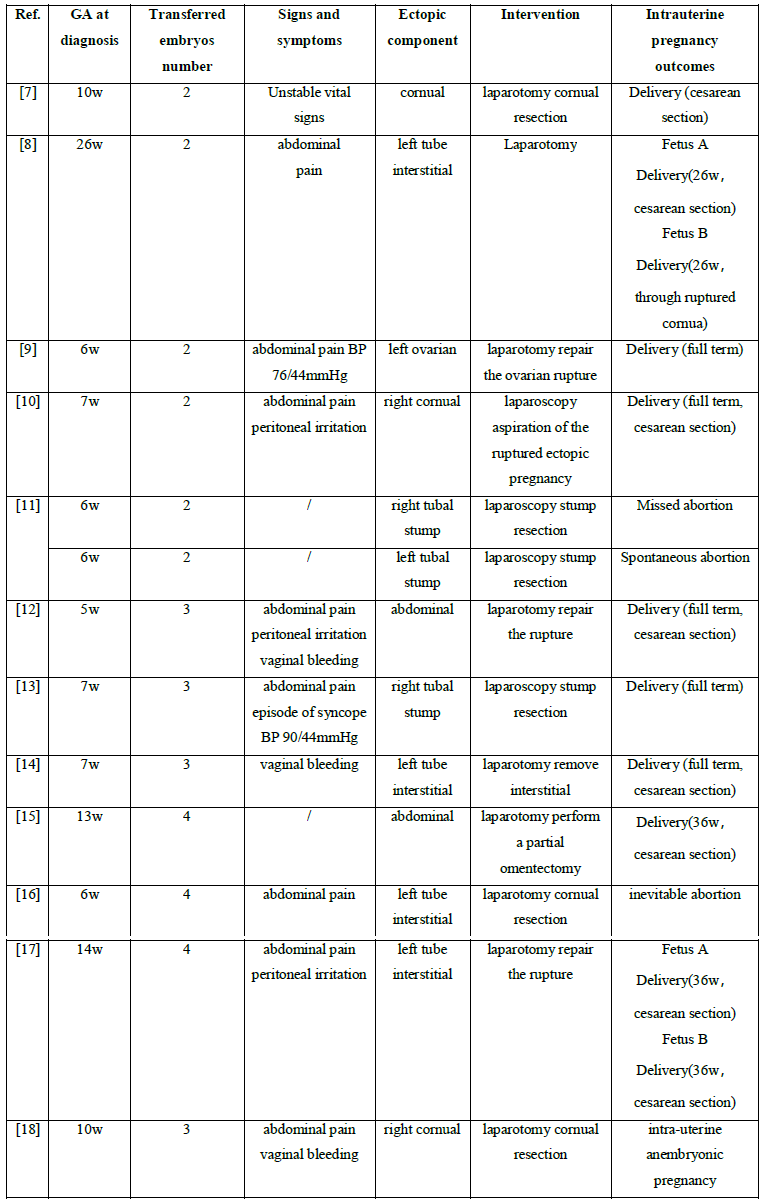