A Cross-Sectional Study On Caregivers Knowledge, Attitudes and Practices about the Routine Immunisation Program in Tshwane Sub-District 2, Gauteng, South Africa: 2015

Introduction: Despite childhood immunisation services being free in South Africa, Tshwane sub-district 2 continues to have the lowest vaccine coverage rate of all the Tshwane sub-districts in Gauteng province which is below the 90% national target. For measles, the immunisation coverage target is 95% and 90% for other antigens. To understand the factors for low coverage, a caregivers’ knowledge, attitudes and practices (KAP) study regarding the routine immunisation programme was done.

Methods: A cross sectional survey was conducted among caregivers of children <5 years old attending 10 of the 12 clinics in sub-district 2 for any health reason from June to August 2015. An interviewer-administered questionnaire was used and immunisation cards were reviewed. Of 23 questions asked, 18 assessed knowledge, 3 attitudes and 2 practices. Descriptive statistics were used to describe the data using STATA version 13 and Microsoft Excel.

Immunisation is one of the most cost-effective public health tools for combating and eliminating infectious diseases [1, 2]. It has led to a decline in morbidity and mortality associated with vaccine preventable diseases (VPDs) since the implementation of the immunisation schedule recommended by the World Health Organization (WHO) [2]. Immunisation coverage rate is considered to be a surrogate measure of protection [3]. The WHO estimates that 2.5 million children <5 years die from VPDs each year [4, 5]. Children should receive all their immunisations within recommended intervals and at the appropriate age in order to have maximal protection against VPDs [6]. Incomplete immunisation is a significant public health problem as low coverage rates can affect herd immunity and therefore pose a threat for outbreaks [7]. Caregivers play an important role in the immunisation of children [8]. Their compliance with immunisation schedules leads to full immunisation of children, thus preventing VPDs in children [2].

2. Methods
2.1 Study design and site
A cross sectional survey was conducted among the eligible caregivers of <5 children from June 2015 to August 2015.

2.2 Study site and study population
The study was conducted in 10 of the 12 public health facilities in Tshwane sub-district 2 that provide primary health care services. Eligibility criteria included caregivers whose children were <5 and had been residing in sub-district 2 for more than 6 months, who attended the clinic for immunisation services and/or other services and gave written consent.

2.3 Sampling and sample size
Assuming a 5% level of significance, 95% confidence interval, precision of 5.5% confidence interval width, and 100% response rate, the minimum sample size required was 314 calculated using Epi Info 7 software. The total population of children <5 years in Tshwane sub-district 2 was estimated to be 33,209 using Statistics of South Africa (STATSSA) estimates from 2013. Caregivers were conveniently selected by consecutively enrolling all caregivers who visited the clinic on the day of the researcher’s visit.

2.5 Data analysis
Data were summarized using frequency distribution tables related to knowledge, attitudes and practices of caregivers. Microsoft Excel 2013 was used to generate the frequency distribution tables and bar charts. Data were analysed using Microsoft Excel 2013 and STATA 13. For the purpose of scoring participants regarding their knowledge, attitudes and practices, responses for each question were assigned a score of ‘1’ for a correct/positive response and a score of ‘0’ for a wrong/ negative response. The scores were summed up for each participant and the mean (SD) scores were calculated for the whole sample. The scores of fully immunised and not fully immunised were compared to determine if there was any statistically significant difference between the two groups.

2.6 Ethical considerations
Caregivers provided written consent if they were willing to participate in the study. Participants were given study identification numbers and no personal identifiers were used on the questionnaires. Ethical clearance was obtained from the University of Pretoria ethics committee. Permission to conduct research in Tshwane was obtained from Tshwane Research Committee, and facility managers of participating clinics in Tshwane sub-district 2. 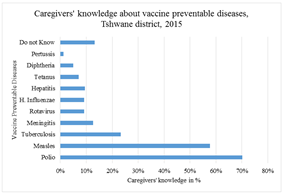 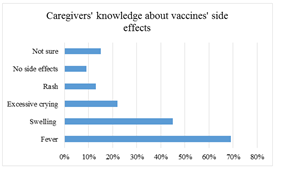 Fever was mentioned by 69.3% (226/326) of caregivers as a contraindication to immunisation. Overall knowledge that immunization prevents disease was demonstrated by 95% (311/326) of the caregivers (Figure 3). Additionally, 98% (319/326) were confident that immunisations were safe for their children (Figure 4). 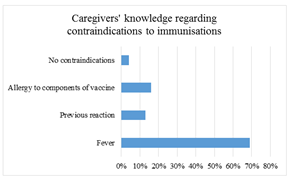 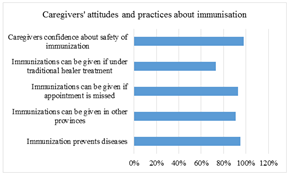 Overall, most of the caregivers knew that immunisations prevent diseases and that vaccines were safe for their children but they could not mention the different vaccine preventable diseases and side effects. This is similar to the findings of the study conducted in Nigeria, India and in the Democratic Republic of Congo [11-13]. However, the caregivers had positive attitudes towards immunisations. In our study, measles and polio were mentioned by a one third of the caregivers as a VPD. Poor knowledge regarding immunisations did not appear to have contributed to low coverage rates. This is in contrast to studies conducted in Nigeria and Pakistan that noted that vaccination coverage was significantly correlated with caregiver knowledge on immunization [14, 15]. This suggests that caregiver knowledge is not the sole factor that improves the likelihood of an infant being fully vaccinated. Regarding practices, the immunisation status of children differed across different age groups. The majority of children <18 months were fully immunised. Those not fully immunised in this age group cited health system factors, including stock outs of vaccines, negative attitudes of staff, and long waiting times. A study in North West Province, South Africa identified that low immunisation uptake was associated with low income status, large families, migrant status, education level of mothers and certain cultural beliefs [1]. In Nigeria, causes of low coverage were found to be inadequate vaccine supply in facilities and lack of knowledge about immunisation benefits and schedules [16]. The lowest percentage of children fully immunised according to their age was among those >18 months. This is similar to other studies that have shown that immunisation coverage declines with older age [6]. The limitations of the study included a non-representative sample: 10 out of 12 clinics in Tshwane sub-district 2 gave permission to conduct research. We used convenience sampling: interviewing those caregivers who were at the clinics during the researchers visit. These two limitations compromised the generalizability of our findings to the whole country.

5. Conclusion
Overall, the knowledge of caregivers regarding routine immunisation was poor. However, their attitudes and practices were generally positive. To improve the coverage, health care providers should identify caregivers with infants that are not fully immunised to explore what modifiable risk factors are associated with non vaccination and identify intervention measures. Health promotion messages should focus on the importance of immunisations, VPD’s, side effects and contraindications and how to manage them. All Road to Health booklets/cards should be checked when children <5 attend the clinics for any reason.

Acknowledgements
We gratefully acknowledge funding from School of Health Systems and Public Health Research Committee (SHSPH RESCOM), University of Pretoria and Ms Manchaba Gloria Masenya for the contribution she has made during data collection and thank all the caregivers who participated in the study. We are grateful to Dorothy L. Southern for her input and guidance on scientific writing and for the critical review of this manuscript.