Effects of Turbidity and Acidity on Predator-Prey Interactions

Shixu Zhu and Yixin Zhang. Effects of Turbidity and Acidity on Predator-Prey Interactions. Journal of Environmental Science and Public Health 3 (2019): 246-256.

Interactions between predators and prey rely on their sensory pathways to detect each other [1], and such ability varies in different surrounding environments [2]. Those sensory pathways of predators and prey, including the chemical stimulus and visual cues, can be interfered by anthropogenic disturbance, such as increased turbidity and acidification [2-4]. Turbidity is usually related to increased sediment inputs through surface runoff caused by anthropogenic disturbance, such as deforestation and urbanization [5-7]. High water turbidity can influence the interaction between predators and preys through deterring their visual cues [8, 9]. For example, high turbidity in water can provide a refuge for prey, because prey visual cues to predators are limited [10-12]. However, little is known about how the impact of turbidity will induce the trophic cascading effect on leaf litter weight loss, which can be that the top-predator’s non-lethal predation effect constrains intermediate predator foraging, and releases its predation risk on shredders, and thus speeds up the leaf litter weight loss.

On the other hand, acidification resulting from atmospheric pollution with high rainfall events [13] can influence on leaf litter leaching, such as leaf litter decomposition [14], and can cause impairment of the chemosensory system of aquatic organisms, consequently, affecting their ability to obtain chemical cues [15-17]. Our understanding on how increased acidification and turbidity influence predator-prey interaction to trigger trophic cascade effect on leaf litter leaching is still limited. In the present study, through a four-trophic level experiment: piscivorous fish, invertivorous fish, shredders, and basal resource (leaf litter) (Figure 1A), an experiment was conducted by manipulating treatments with increased levels of turbidity and acidification in mesocosms.

The high turbid treatment and acidic treatment can constrain the visual sensory and chemosensory of foragers, in terms of predators and prey, respectively. We hypothesized that macroinvertebrate shredders are top-down controlled by invertivorous fish, and a top predator (piscivorous fish) can trigger a non-lethal trophic-cascade on leaf litter weight loss. We compared these treatment effects on changes of shredder invertebrate abundance and leaf litter biomass. 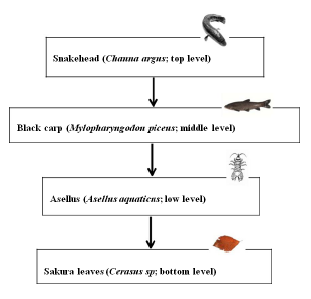 Figure 1: (A) Diagram of the relationships within four levels of tropic interactions. It was tested that the black carp did not eat leaf litter and the snakehead did not eat Asellus sp. shredders.

The objective of this study was to examine how increased turbidity and acidity affect predator-prey interactions, and the consequence on leaf litter weight loss. With different treatment conditions, we further hypothesized:

This experiment was conducted in the aquatic field lab at Xi’an Jiaotong-Liverpool University (XJTLU), Suzhou, China (31°16′30″ N, 120°43′59″ E). Snakehead (Channa argus ) was chosen as the top predator (standard length: 20-25 cm). Snakehead is a widely distributed piscivorous fish in China [20] and recently became an invasive species in North America and Europe [21]. Juvenile black carp, Mylopharyngodon piceus (Cypriniformes: Cyprinidae), is a native fish to lakes and rivers in East Asia, which was chosen as the invertivorous predator (body standard length: 7-10 cm). Black carp are widely cultured distributed in China and mainly feed on benthic invertebrates such as snails, clams, shrimps, and aquatic insect larvae [22] and Asellus sp. (body length: 0.5-1 cm) as the low-level consumer-a shredder which mainly feed on organic matters [23]. For the primary producer, the sakura (Cerasus sp.) leaf litter was used.

The sakura leaves were collected on ground along the Renai Road nearby XJTLU. Sakura leaves were washed carefully in lab and dried at 60°C for 24 h. Both snakehead (piscivorous predator) and juvenile black carp (invertivorous predator) were obtained from the local fishermen in Suzhou. The isopods (Asellus sp.) were collected in the stream nearby XJTLU. In lab condition, Asellus sp. individuals were observed to feed on Cerasus sp. leaf litter. For all fishes and shredder Asellus sp. were all isolated respectively in the water at the field lab for 3 days without providing food, as this standardized hungered level should reduce the variation of previous foraging efforts. Animal individuals in this experiment only were used in a single mesocosm with different treatments. The indication of hypothetic trophic relationship in the experiment is shown as Figure 2. The experiment was conducted in the aquatic station at XJTLU along a river at field condition with natural light. 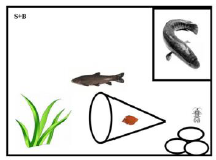 Figure 2: The indication of the experimental mesocosm structure. We put the gravels/cobbles right under the niche of snakehead and the leaf litter bag in the middle of watergrass and cobbles. To make sure the black carp can eat the prey Asellus sp., we kept the mouth of the leaf litter pack opened.

Three experimental treatments were: (1) natural condition (NTU of 10 and pH of 7.5); (2) high turbid level (NTU of 60 and pH of 7.5) (3) acidic conditions (NTU of 10 and pH of 6.0). Each treatment had 8 replicates (Figure 1). Each replicate was set in a mesocosm (60 cm × 40 cm × 34 cm, 30 L). For the top predator, one snakehead was put in a transparent plastic niche (20 cm × 20 cm × 16 cm) covered net screen with 0.55-mm mesh size (Figure 2). Three-gram sakura leaf litter (dry weight) was put in the small yellow nylon pack (8 mm mesh size). We used the stones (diameter of 5-10 cm) as the refuge for 10 individuals of freshwater isopod Asellus sp. in each mesocosm. We used artificial aquatic grasses (one individual ranges from height of 10-15 cm) as the refuge for the two black carps in the mesocosm. During the experimental period, the institutional animal use and care guideline was followed.

2.1 Effect of turbid and acid environment

The pH of water in mesocosms was measured by a portable electric pH meter and the turbidity by the automatic nephelometric analyzer. To simulate the natural condition, we used the river water from the river channel beside the aquatic lab with pH of 7.5 and Nephelometric Turbidity Unit (NTU) of 10. To simulate the high turbidity treatment, 10 g fine particulate Kaolin clay powder (diameter <0.05 mm) was added into the mesocosms based on treatment of natural to the turbidity about 60NTU (about 3.33 g/L [12]). To simulate the acidic environment with four-level food chain, the pH of the water was buffered to 6.0. The pH of 6.0 was regarded as a major freshwater acidification threshold for many biota species [24]. We acidized the river water by dropping in minute amounts of dilute H2SO4 under the monitoring of portable water pH meter.

The experiment was ran for 48 hours. The reason for having 48-h experimental time was that the prey could have a chance of survival under predator treatment through this experimental period, which allowed to obtain the survival data with variation that is necessary for statistical analysis. If the experimental time is too long, there would be not be any prey individual left at the end of the experiment, which would cause no data suitable for statistical analysis. For each treatment, after 48 hours, the leaf litter packs were taken out and sent to the laboratory, gently washed and dried for 24 h at 60°C, and weighed. The dry weight change of the leaf litter was caused by both processes of leaf litter leaching and shredder’s foraging.

For Asellus sp. shredders, the remained individuals were checked in mesocosms after 48 hours and recorded. In addition, during the 48 h experimental period, careful observations on organisms’ behaviors were conducted about every 12 hours. During the observation, behaviors of black carp and Asellus sp. (foraging or hiding in the refuge) were recorded and each observation lasted about 20 minutes for all the mesocosms.

Through manipulating the high turbidity condition, the increased mortality of Asellus sp. shredders was found due to black carp’s predation, which triggered trophic cascading effect on leaf litter weight loss. This is in accordance with our hypothesis (Figure 1B-b). High water turbidity can affect interaction between predators and preys through deterring their visual cues [8]. Although some other studies suggested that high turbidity can amplify the non-lethal effect of predators on prey which reduced the foraging activities of prey [12, 27], yet in our study, we observed that the black carp swam around and did not hide in the refuge or under the leaf litter pack under high turbid environment. The high turbid condition can provide the ‘visual refuge’ for invertivorous black carp by limiting visual cues to the top predator-snakehead [10, 28, 29]. However, high turbid environment may have no effect on predators that rely on chemical cues for detection [27]. for fish species which rely on visual cues would be more sensitive to detect those mobile prey [32-34]. Our experiment was conducted under natural light condition, so that visual cues should function well at all day time.

This mesocosom experiment revealed that high turbidity and acidic condition can restrict target detection by the access of visual cue and chemical stimuli for both predators and preys, which can cause the loss of antipredator response of intermediate predator (more rely on visual cue) and basal prey (more rely on chemical stimuli). In this study, both cases finally led to the high mortality of isopod Asellus sp. shredders. Under high turbidity condition, a trophic cascading effect caused by changed predator-prey interaction further led to reduction of leaf litter weight loss, because the turbidity condition reduced the top-predator’s predation effect on the intermediate predator, so that the reduction of shredder density caused by black carp foraging decreased leaf litter weight loss. Our results indicated that abiotic condition changes due to disturbance can change and modify trophic interaction in aquatic ecosystems, and such anthropogenic impacts with multiple stressors on predator-prey interaction should be further investigated for understanding their ecological mechanisms.

We thank Zhaofeng Yuan and Hongyong Xiang for their help in the field to collect shredders and providing lab support. We thank several reviewers for their constructive comments and suggestions on earlier versions of the manuscript. This work was supported by XJTLU Research Development Fund (RDF-15-01-50), Huai’an Science & Technology Bureau Program (HAS201617), and Jiangsu Science and Technology Program (BK20171238).