4Faculty of Medicine and Pharmacy, University of Douala, Cameroon

7Laboratory of Hydrobiology and Environment, Faculty of Sciences, University of Yaounde I, Cameroon

Background: In Cameroon, the practice of market gardening exposes both the farmers and consumers to a certain number of health-related hazards. Environmental health risks associated to this activity showed that it was responsible for the increased of transmission risk of the human and animal intestinal worms.

Methods: The epidemiology of soil borne diseases associated with urban agriculture was furthermore considered in three market garden sites of the city of Yaounde (Tsinga, Nkolondom, Nkolbisson). From October to December 2016, water and soils from rivers, wells and furrows were analysed for physicochemical characteristics and parasite identification using Kato-Katz and Formol-Ether methods.

Conclusion: The presence of viable helminths suggests that harmful soil pathogens such as protozoans and helminths can spread through market gardening. This reminds on the need to find better ways to alleviate the control of intestinal parasitic infections which, nevertheless, are classified as neglected tropical diseases.

Market gardening is expanding with little regulation in African cities as alternative responses to poverty and food insecurity [1]. Landscapes used for its practice, are usually valleys and swampy areas with easy access to rivers and groundwater for plant watering. Wells and furrows are created between crops to facilitate plant’s irrigation. People living in these areas rely on market gardening for living despite the potential impact on health. Health risks in urban farming may be contamination with pathogens and chemical residues from polluted water sources, human disease transmitted by some vectors and zoonosis transmitted by domestic animals [2]. This situation calls for good management of risks through holistic approaches presently driven by the “One health” concept, which is promoting integrated actions for prevention of zoonotic and infectious diseases [3]. In Cameroon, market gardening contributes to food supply at the national level and neighboring country markets [4, 5]. Despite his positive economic impact as source of income and wellbeing for local communities, the practice of market gardening exposed both the farmers and consumers to a certain number of health-related hazards, such as organic pollution and spreading of communicable diseases [6, 7]. Almost 32 000 households were involved in market gardening in Yaounde [1] and the number has certainly increased over years. Previous studies on environmental health risks associated with urban farming and livestock activities showed that the combination of the two activities was responsible for increased transmission risk of the human and animal intestinal worms [8, 9]. Soil pathogens are usually coliform bacteria, protozoans and helminths, but there are knowledge gaps on their potential dissemination routes. This paper provides a comprehensive mapping of soil transmitted protozoans and helminths in vegetable farming environments of the capital city Yaounde.

2.1 Study period and sitesThe study was conducted from October to December 2016 in 3 selected market gardening locations of the capital city Yaounde, Cameroon. Figure 1 shows the 3 different studied areas. These sites were Nkolondom (N 3° 57’ 11.89”; E 11° 29' 41.01'') crossed by the river Ntsas, Nkolbisson (N 3° 52' 8.48''; E 11° 27' 14.39'') crossed by Afeme and Mefou rivers, and Tsinga (N 3° 52' 57.16''; E 11° 30' 40.66'') watered by West Abiergue stream. The study area belongs to the equatorial domain and experienced a bimodal precipitation regime. The landscape is dominated by plains and valleys. The local hydrographic network is mainly composed of the river Mfoundi and its tributaries [10, 11]. Market gardening activities peak with an increase access to farming ground and water sources during dry seasons. 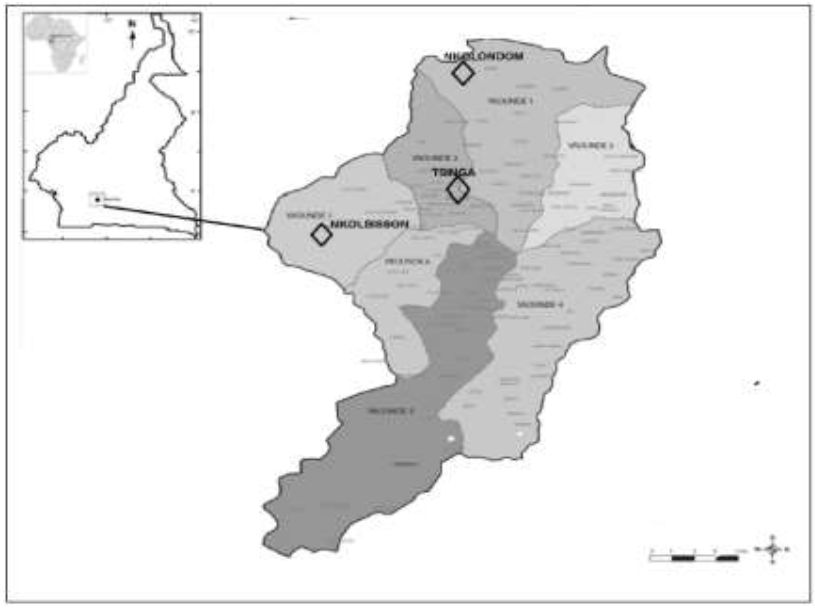 Muddy water samples were selected from aquatic environments used for crop’s irrigation, like furrows, rivers/streams, wells. Environments were prospectively chosen based on their availability in the study area. After the measurement of temperature in the field, each sample consisted of a minimum of 250 ml per collection in different location, stored in plastic bottles and transported immediately to the laboratory for subsequent analysis. 2.3 Physicochemical measurementsPhysicochemical parameters were measured in water samples collected from various aquatic environment of the studied areas. In water samples stored properly in laboratory, electrical conductivity and pH were measured by a multimeter and a portable spectrophotometer was used to quantify color and turbidity [12].

Muddy water samples were left for 24 h at room temperature before proceeding for parasite identification. Kato-Katz and Formalin-ether techniques currently used for stools were adapted for parasite identification in soil samples. Sample preparations were performed according standards WHO protocols [13]. About 150 µl of sample were used for slide preparation, prior the detection of protozoan and helminths. All stages were identified following their morphology using microscope (magnification ×100 or ×400) [14]. Parasite viability was determined using morphological criteria that combined egg integrity (size, color, shape) and the presence of visible and/or motile larvae under microscope.

Parasites were counted for each 150 µl samples and the density (D) was estimated per gram of pellet according to WHO formula: D  , with n as the number of parasites. The species richness and the multiple site similarity were used to analyze diversity and distribution [15]. The following formula was used to estimate the three site similarity index:

(Table 1) shows an overview of the means variations of some Physicochemical parameters of furrows (N=33), rivers (N=26) and wells (N=23). We observed a range of 25.2-25.5 °C for temperature, 6.53-7.01 UC for pH, 308.8-502.2 µS.cm-1 for electrical conductivity, 637-1,300 FTU for turbidity and 2,451-6,422 Co-Pt for color. High values of electrical conductivity of studied environments indicated mineralization in Tsinga, whereas pH and turbidity values in such environments in Nkolbisson suggested abundance of organic matters (data not shown). 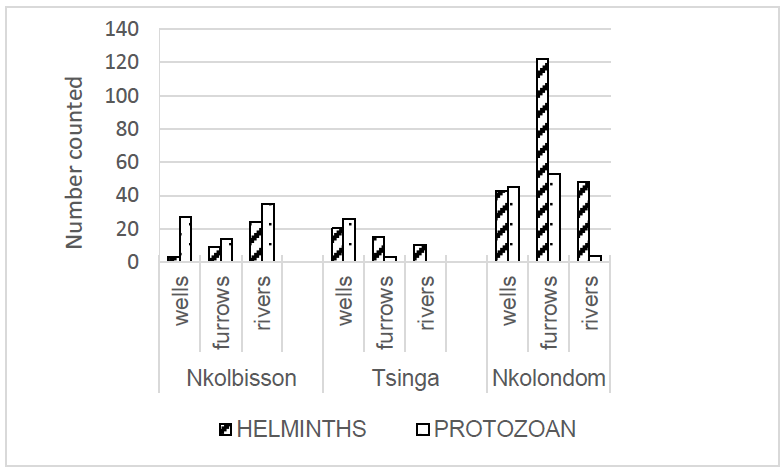 From (Table 2), we can clearly see the species richness in different areas. This observation was consistent with the species similarity between locations (Cs=0.52) and environments (Cs=0.56), indicating that almost 52% and 56% of species are shared by all the locations and environments respectively. Ascaris lumbricoïdes, Trichuris trichuira, Fasciola hepatica, Strongyloides stercoralis and Entamoeba histolytica were found in all locations while Hymenolepis nana, Paragonimus westermanii, Sarcocystis sp. and Giardia intestinalis were identified in Nkolondom. Three species were apparently confined in furrows.

The overall parasite viability rate is clearly indicated in Table 2. Effectively, 5.1% and only seven helminths showed viable stages (larvae or eggs). The rate was 7.1% in wells, 2.2% in rivers and 1.6% in furrows. Viable helminths were found in Nkolondom (3.8%) and Tsinga (15.6%) while all parasites identified in Nkolbisson were unviable.

The study was designed to gather updated information on the distribution of protozoans and helminths in three market gardening sites of the city of Yaounde. It came out from the results that helminths and protozoans were present in studied locations. This finding was consistent with previous works carried out in the same area and suggests the endemicity of these groups of pathogens involved in diarrheal diseases and zoonosis in these environments [7]. Entamoeba histolytica (~84%) as a protozoan and helminths i.e. roundworms (S. stercolaris and A. lumbricoïdes), sheep fluke F. hepatica and fish tapeworm D. latum represented almost 80% of total soil parasite species. These pathogens together with fecal coliform bacteria are distributed in environments through rivers and traditional wells used by farmers for plant watering and irrigation. They can cause diarrheal diseases and/or zoonosis in farmers or consumers of farming products. Entamoeba histolytica distributed in all locations, and the similar trend observed in marshy sites in Douala [17] and Ndjamena [18] suggests his predilection for urban areas. These parasites are those causing intestinal disorders like roundworms (S. stercolaris and A. lumbricoïdes), the whipworm T. trichuira and the tapeworm H. nana species. Other zoonotic helminths i.e. D. latum and F. hepatica, and Trichostrongylus sp. seems to be related to slaughter activities nearby selected locations. The presence of Schistosoma sp. (probably S. guineensis or S. intercalatum) and P. westermanii considered as non-endemic in our study locations is indicative for possible importation from other sources of contamination.

Few observations in study location had already identified: i) inappropriate agricultural practices, ii) various health constraints (feces excreted by human/animals, hospital’s wastewater and iii) health status of local populations as factors contributing to environmental contaminations [19-21]. Poor hygiene and environmental conditions in lowlands and agricultural settings were related to the abundance of helminths, protozoans and faecal coliform bacteria [10, 22, 23]. Species distribution showed modest diversity per location and environment, and discrepancies observed in our study could be due to soil composition and water physicochemical properties. In fact, the highest parasite density and species richness in clay soils in Nkolondom contrasted with the reduction in species abundance in sandy environments from Tsinga. The predominance of organic matter in water (furrows) was advantageous for parasite conservation than high electrical conductivity conditions (rivers and wells) resulting from the water mineralization [12].

Only helminths showed viable stages in Tsinga and Nkolondom, and especially in wells. Therefore, the persistence of viable parasites although in low frequencies constitutes a potential health risk associated with agriculture. Several factors may contribute to this parasite viability. Firstly, low temperature, high humidity, poor exposure to sun and clay soils may enhance the survival of some helminth eggs and protozoan cysts in the environment [24]. Secondly, external membrane of helminth eggs may exhibit more resistance compared with that of protozoan cysts [25, 26] and then pesticide utilization can reduce parasite survival [27]. Our findings are certainly informative in assessing the potential environment health risk of urban agriculture practices but could be limited the concentration methods used to assess the composition and the viability of parasite stages. These concentration microscopy-based techniques usually performed for the detection parasite in stools may display low performances compared with mini-FLOTAC and molecular techniques [28].

The potential environmental health risk due to the presence of harmful protozoans and helminths in market gardening areas of the capital city of Cameroon reminds us on the need to find better ways to alleviate the control of intestinal parasitic infections which, nevertheless, are classified as neglected tropical diseases. Adopting an integrated strategy based on the environmental management of health risks and the development of capacities of farmers and other actors of the sector should be preliminary steps towards the reduction of negative health effects of urban agriculture in Africa.

We thank Mr Bayibeki Ngano Albert and Mr Mvondo Narcisse for their technical assistance in the field. This work forms part of a ‘‘PADY-2 project funded by BAD-AFD-GEF through a service provision of OCEAC to Société Services Camerounais d’Assainissement (SECA).