A Single Chamber Microbial Fuel Cell (MFC) has been fabricated to generate electricity from the sludge of the sewage treatment plant at Anand International College of Engineering, Jaipur, at two different ambient temperature range of 25 ± 4°C and 32 ± 4°C under aerobic condition. The maximum voltage obtained was about 2890 mV after 80 (hrs.) at temperature range of25 ± 4°C, with the surface power density of 1108.29 mW/m2. When the ambient temperature was 32 ± 4°C, the maximum voltage obtained was 1652 mV after 40 (hrs.) surface power density reduced to 865.57 mW/m2.While changing the amount of substrate for certain area of the electrode at 25 ± 4°C range it showed that the electricity generation decreased with the available substrate and it also shortens the time to peak voltage. On the other way when the ambient temperature increased to 32 ± 4°C, the maximum potential energy generated is less than the previous temperature for the same substrate per unit area of the electrode and also the time to peak voltage decreases to 40 hrs. At the end of the 152 (hrs.), the maximum COD reduction for the sewage sludge was 30% for 32 ± 4°C. When comparing with other single chambers MFC, the present model is generating more electricity that any MFC using sewage sludge as substrate except platinum electrode, which is much costlier that electrode used in the present study.

The microbial fuel cell is a device which generates electricity by the metabolic activities of the microbes. Microorganisms transfer the electrons obtained from the metabolism of organic matters in the anode and thereby to the cathode through an external circuit, hence generate electricity [1, 2]. Though a century old technique, which was initially recognized for treatment of wastewater, MFC is gaining its interest for the generation of electricity, bio-hydrogen and also used as biosensor [3, 4]. Any biodegradable organic ranging from pure compounds such as glycerol, acetate, starch, glucose, cysteine, and ethanol [3, 5] to complex mixtures of organic matter such as wastewater [6], cow dung [2], and kitchen waste [6] are the ideal candidates of sustainable energy source for MFC. The performance of microbial fuel cell depends upon the types of electrode materials, microbe & substrate and its concentration, pH, temperature and ionic strength.

The various types of the electrode that can be used in the construction of the microbial fuel cell are graphite; graphite felt, Platinum (Pt.), Pt. black, carbon paper, reticulated vitreous carbon (RVS). The design of MFC may be 1. Two compartment MFC systems consisting of an anodic chamber and catholic chamber separated by proton exchange membrane (PEM) or sometime salt bridge to allowing the proton to move across the blocking the diffusion of oxygen into the anode [3]. 2. Single ?compartment MFC systems consisting of the single anodic chamber without the any aerated catholic chamber [3]. The anode chamber is coupled to a porous air-cathode exposing directly to the air.

In conventional single chamber MFC the anode and cathode are separated by a membrane or sometime cathode is directly exposed to air. In both the cases, anode and cathode are completely different material in design and composition. In our present studies, we are using single chamber MFC where the carbon rod extracted from the used dry cell is used as anode and copper as a cathode. The substrate used here is domestic sewage sludge.

2.1 Collection and preservation of sample
The sewage sludge is collected from the waste water treatment plant at Anand International College of Engineering, Jaipur. The sludge was preserved at 4°C after collection and before using in MFC [12]. The physiochemical characteristics of the sludge used in MFC are shown in the Table 2.

2.2          Design
Six numbers of single chamber MFCs having carbon electrode as anode and copper as a cathode connected externally in series with copper wire have been used in this present study. Each electrode is submerged into the sludge and copper cathode is exposed to the atmosphere. Figure 1 shows the experimental setup in details.

The various components in microbial fuel cell are as follow;
2.2.1       Electrode: The carbon electrodes were taken from the used dry cell to absorb electrons from the substrate, before using the electrodes were cleaned with 0.1 M HCl and stored in deionized water for 12 hr. The dimension of the electrode is 10 mm diameter and 57 mm, respectively having 40 mm (70% length) as the anode and 17 mm as cathode over which the copper wire was bounded acting as the cathode. Hence the surface area of an anode is 1256 mm2.
2.2.2       Copper wires: The copper wires of 0.7 ohms resistance were connected with the electrodes. The external circuit was in series connections.
2.2.3       Calibrated multimeter: To measure the voltage output (Model No.MAS83OL).
2.2.4       pH meter:To measure the pH of the sewage sludge ( Make: Systronics) 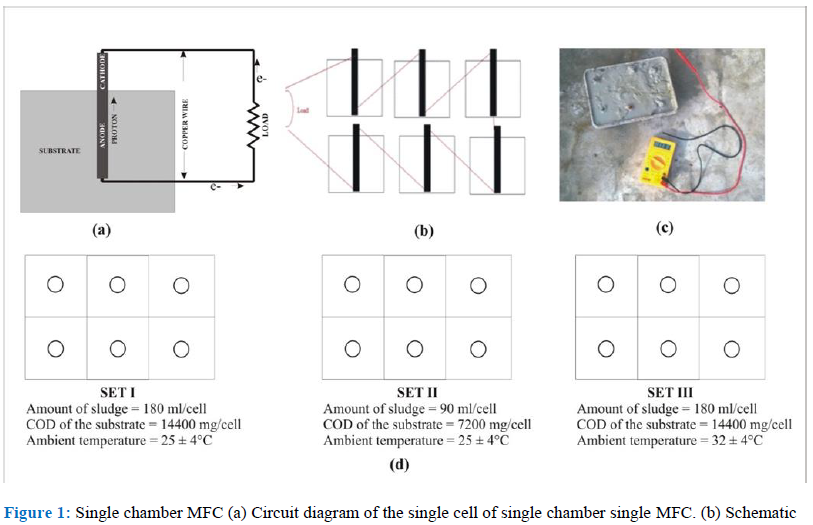 The carbon electrodes were fixed in the containers with the help of the copper wires and are connected in series externally. The collected sewage sludge was mixed uniformly and was poured into the container and allowed the bacteria present in it to grow and start the metabolic activities in aerobic condition (Figure 1).

2.3          Performance evaluation criteria
For all the three sets the voltage output was recorded by the multimeter across the resistor of 1000 ohm at the regular interval of 8 hrs and continuously operated until the energy generation is diminished to zero (least count of the multimeter is 0.01 mV). The first two sets were operated at the ambient temperature of 25 ± 4°Cwhile the third set is operated at the ambient temperature of 32 ± 4°C, which was within 10 days.

The surface power density P (mW/m2) is calculated as , where V (mV) is the measured fuel cell voltage, R(ohm) external resistant and A ( m2) projected surface area of the anode, 1000 is needed for maintaining the units. 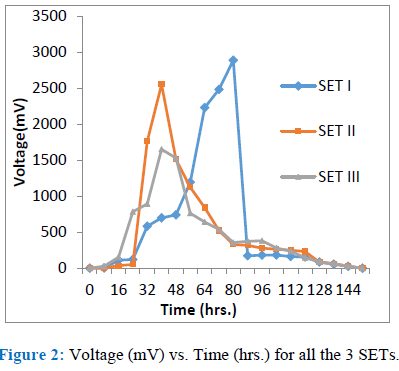 The present study is a novel and economical (cost of each cell Rs.250/-only) single chamber microbial fuel cell for the generation of electricity. Result found is very encouraging when compared to other single chamber MFC. The highest surface power density found to be 1108.29 mW/m2 which is more than any other single chamber MFC excluding platinum electrode (Table 1). Both SET I and SET II are experimented at the same ambient temperature and substrate, where SET II is giving less potential energy. This is because the amount of substrate (hence COD) available for anode at SET II is less than SET I. SET I and SET II are designed in such a way that the same amount of surface area of the electrode is exposed to the substrate in both cases. Thus, in SET II reducing the volume of the substrate in half will also decrease in substrate availability per unit area of the electrode to half. The reduced available substrate per unit area of the electrode not only reduced the peak potential energy, but it also shortens the time to peak voltage. SET III which is operated at the elevated ambient temperature (32 ± 4°C) gives less peak potential energy than SET I and SET II thus indicating that among the two different range of ambient temperature 25 ± 4°C and 32 ± 4°C, the previous one is more promising.

As per the very preliminary study conducted on the presented single chamber, MFC is can be undoubtedly said that the current model is capable of generation of electricity from the domestic sewage sludge economically and effectively.

We are very grateful to Anand International College of Engineering, Jaipur for the financial support to carry out the above project work.