Antibiotic Resistance and Phenotypic and Genotypic Detection of Colistin Resistance among Enterobacter Species Isolated from Patients of a Tertiary Care Hospital, Bangladesh

Enterobacter spp., including Enterobacter cloacae and E. aerogenes, are opportunistic pathogens that cause infections in the blood, respiratory, urinary, and gastrointestinal tracts [1] and are a member of the ESKAPE group of significant bacterial pathogens in humans [2]. Enterobacter is associated with hospital acquired infection that has been ranked as the third most frequent isolate following Escherichia coli and Klebsiella species [3].

As multidrug resistance and carbapenem resistance increase in Gram-negative pathogens including Enterobacter spp., colistin, a polycationic antimicrobial peptide, is often recommended as a last-line therapeutic option [10]. Although colistin resistance rate is relatively low worldwide, resistance has begun to emerge [11]. In addition to the steady emergence of colistin resistance due to chromosomal mutations, plasmid-borne colistin resistance has recently been reported, which is a great threat to public health [12]. Implementation of effective surveillance programs and infection controls are considered as the two pillars to check the growth and spread of AMR [13]. Accurate and timely information on local and national patterns of organisms causing infection and their drug-resistance profile is therefore paramount for good clinical management and benchmarking [14].

This cross- sectional study was conducted from July 2018 to June 2019 in the department of Microbiology, Dhaka Medical College Hospital Bangladesh. Samples was collected from adult patients having clinically suspected infections admitting in Dhaka Medical College Hospital or were received in the Microbiology department for culture and sensitivity after taking informed written consent irrespective of sex and antibiotic intake. Patients who did not give consent were excluded from this study.

2.2 Isolation and Identification of Enterobacter Species

Susceptibility to antimicrobial agents of all isolated organisms were determined by Kirby-Baurer modified disc diffusion technique using Mueller-Hinton plates and zones of inhibition were interpreted according to CLSI guidelines [16]. The criteria for the United States Food and Drug Administration was used for the interpretation of zone of inhibition of tigecycline. Antibiotic discs were obtained from commercial sources (Oxoid Ltd, UK). Following antimicrobial discs were used: amikacin (30μg), piperacillin-tazobactam (100/10μg), imipenem (10μg), tigecycline (15µg), ciprofloxacin (30μg), cefepime (30μg), ceftazidime (30μg), ceftriaxone (30μg), cefoxitin (30μg), cefuroxime sodium (30μg), amoxiclav (amoxicillin 20μg & clavulanic acid 10μg) and aztreonam (10μg). In this method, broth culture of test bacteria (comparable to McFarland tube no.0.5; inoculums density 1.5× 108 bacteria/ml) was uniformly carpeted on the surface of Mueller Hinton agar (MHA). Twelve, antibiotics discs were placed onto the lawn culture of the test bacteria by sterile forceps. The inoculated and seeded MHA plates were incubated at 37°C for 24h. After incubation, zone of inhibition was measured and results were interpreted as sensitive, intermediate and resistant [17]. Colistin susceptibility was determined by agar dilution method.

Agar dilution method was used to determine the susceptibility of colistin. As 0.5 McFarland turbidity standards contain 1×108cfu/ml [16] 10 times dilution of test inoculums was done to achieve 1× 107cfu/ml. Two concentrations of colistin 2µg/ml and 4µg/ml were prepared in the agar medium. Bacterial inoculums was applied readily onto the agar surface and the plates were incubated at 37°C up to 24h. Isolates having a MIC of≤2μg/mL is considered colistin susceptible while MIC of>2 μg/mL is considered colistin resistant [18].

Using sterile cotton swab, test inoculums (compared with McFarland standard) were inoculated in Mueller-Hinton agar plate. Third generation caphalosporins (ceftriaxone, ceftazidime and cefotaxime) were placed 20 mm apart from center of the amoxiclav disc. The inoculated plate was incubated at 370C for 24 hours. A clear extension of the edge of the inhibition zone of cephalosporin discs towards amoxiclav disc was interpreted at ESBLs production [19].

Confrmation of MBL production was made by inhibition method in which Ethylene Diamine Tetra Acetic Acid (EDTA) was used as an inhibitor. Two imipenem discs were placed on the inoculated Mueller-Hinton agar plate. One imipenem disc was supplemented with 5 µl of 0.5 M EDTA solution (containing approximately 750 µg EDTA) and incubated overnight at 370C. An increased zone of diameter of ≥ 6 mm around the disc containing imipenem supplemented with EDTA compared to the disc containing imipenem only was interpreted as MBL production [20].

Minimum inhibitory concentration of colistin was determined by agar dilution method. Different concentrations of colistin ranging from 2µg/ml to 256µg/ml were prepared in the agar medium. For each plate 50ml Mueller-Hinton media was prepared.50 ml of sterile Mueller-Hinton agar was impregnated with 12.5 µl, 25 µl, 50 µl, 100 µl, 200 µl, 400 µl, 800 µl, 1600 µl of colistin to achieve the concentration 2µg/ml, 4µg/ml, 8µg/ml, 16 µg/ml, 32µg/ml, 64µg/ml, 128 µg/ml and 256 µg/ml per plate respectively. Bacterial inoculum was applied readily onto the agar surface and the plates were incubated at 37°C overnight. The MIC end point was determined as the lowest concentration of antibiotics that completely inhibits the visible growth [21]. Escherichia coli ATCC 25922 was used as control strain [16]. Commercially available colistin injection vial (Forest pharma Limited) was used

A loop full of bacterial colonies from MHA media was inoculated into a micro centrifuge tube having sterile TSB and incubated overnight at 37ºC. Incubated tube was centrifuged at 4000g for 10 minutes. Supernatant was discarded and tubes containing bacterial pellets were kept at -20ºC for DNA extraction. Three hundred microlitre of sterile distilled water was added to micro centrifuge tubes having pellets and vortexed until mixed well. Then the mixture was heated at 100° C for 10 minutes in a heat block. After heating, tubes were immediately placed on ice for 5 minutes and centrifuged at 14000 g for 6 minutes at 4ºC. Finally, the supernatant was taken into another micro centrifuge tube. This extracted DNA was preserved at 4ºC for 7-10 days and -20ºC for a long time.

2.7.2 Mixing of Master Mix with Primer and DNA Template

Table I: Primers used in this study [23]

PCR assays were performed in a DNA thermal cycler. After amplification products were processed for gel documentation or kept at -20ºC till tested.

PCR products were detected by electrophoresis on 1.5% agarose gel. Gel was prepared with 1 X TBE buffer (Tris EDTA). For 1.5% agarose gel preparation, 0.18 gram agarose powder (LE, analytic grade, Promega, Madison, USA) was mixed with a 1.25 ml TBE buffer. A comb was placed in a gel tray, the gel was poured. After solidification, 1 µl of loading dye and 5 µl of amplicon was mixed on parafilm and was loaded in agarose well. Similarly, 2 µl of 100bp DNA ladder was mixed with 1µl loading dye and was loaded. Gel electrophoresis was done in 230 voltages for 30 minutes. After electrophoresis, the gel was stained with ethidium bromide (20µl ethidium bromide in 200 ml distilled water). The gel was observed under UV transilluminator (Gel Doc, Major Science, Taiwan) for DNA bands. The DNA bands were identified according to their molecular size by comparing with the molecular weight marker (100bp DNA ladder) loaded in a separated lane.

*Colistin resistance was determined by MIC by agar dilution method. 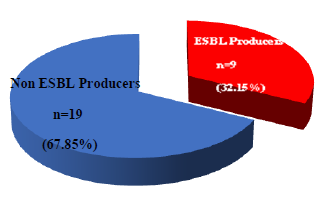 Among the colistin resistant Enterobacter spp., 6 (85.71%) were E.cloacae and 1 (14.28%) were E.aerogenes isolated from different clinical samples (Figure 2) 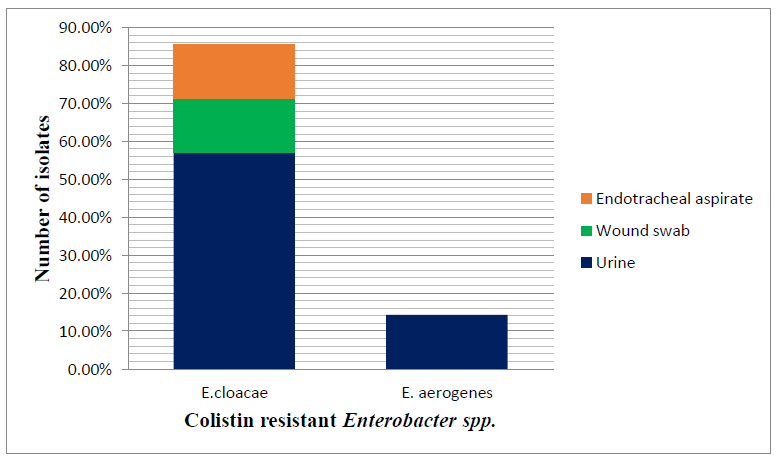 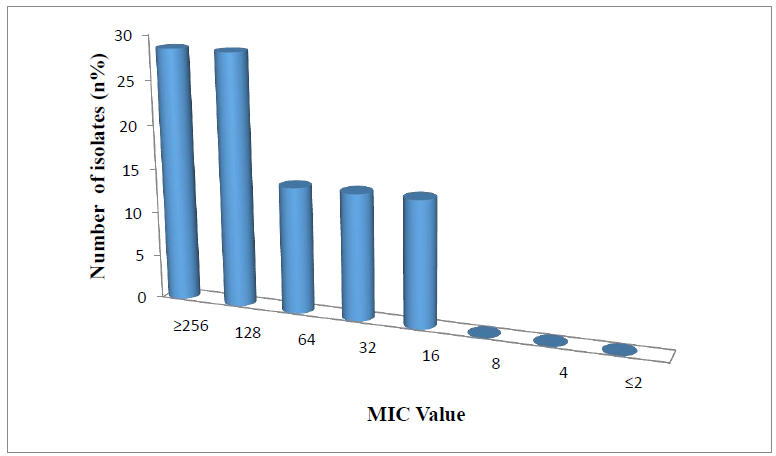 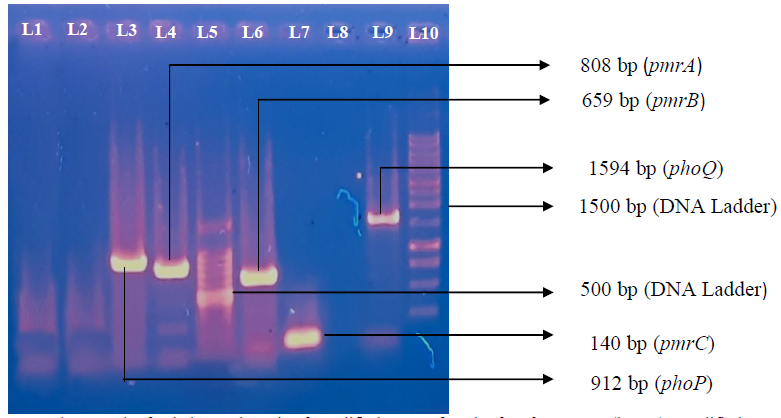 Enterobacter has been identified as an important pathogen causing many types of hospital-acquired infections (HAIs) [24]. The emergence of Enterobacter as a worrying resistant pathogen is an important health concern, especially when the scarcity of new antibiotics active against Gram-negative bacteria is considered .As surveillance of AMR and early response to the infection control are crucial steps to bypass the issues, this study aimed to determine the antimicrobial resistance pattern of Enterobacter species isolated from different clinical specimens and also to find out colistin resistant Enterobacter spp. along with resistance gene in Bangladesh.

Out of 350 samples, 228 (65.14 %) samples were culture positive of which 28 (12.28%) were Enterobacter species. These finding are in agreement with the recent study [25] in DMCH who reported that 63.20% of samples (urine, wound swab, ETA, blood, sputum, pus) were culture positive. A study [26] in India reported that a National Nosocomial Infection Surveillance System (NNIS) showed that Enterobacter accounts for 5 to 11% of all nosocomially acquired blood, wound, respiratory tract infection and urinary tract infection. These findings are nearly close to the present finding. In the present study, among 28 isolated Enterobacter species, 22 (78.57%) were identified as Enterobacter cloacae and 6 (21.43%) were identified as Enterobacter aerogenes by biochemical tests. These findings were similar to a study [26] in India who reported that 77.94% were E. cloacae and 22.05% were E. aerogenes. This similarity may be attributed to the fact that these two studies were conducted in same geographic area.

In the present study, thirteen commonly used antibiotics were used on isolated Enterobacter spp, to observe the antimicrobial resistance pattern by disc diffusion method. Among the antibiotics used, Enterobacter spp. was 100% resistant to cefoxitin and amoxiclav. These finding can be correlated with a study [27] who reported that Enterobacter species are intrinsic resistance to aminopenicillins, amoxicillin/ clavulanic acid, cefoxitin and first generation cephalosporins because of the production of chromosomally encoded, inducible AmpC β-lactamase. In the present study, ceftriaxone and ceftazidime had resistance rate 85.71% and 78.57% a study in palestine [28] reported 68.3% resistance to ceftriaxone and 63.14% to ceftazidime which are lower than the present study. CLSI states that, Enterobacter may develop resistance during prolong therapy by third generation cephalosporins as a result of derepression of AmpC β-lactamase. Therefore, isolates that are initially susceptible may become resistant within 3 to 4 days after initiation of therapy [17], which might be true for higher proportion of resistance for Enterobacter spp. to cefuroxime in the present study. In the present study, 57.17% Enterobacter spp. were resistant to amikacin. In contrast to present findings a study in Iran [29] reported 48.60% Enterobacter resistant to amikacin in a study in Iran which is lower than the present findings. The reason behind the higher resistance rate in the present study might be due to the fact that, there was a significant effect of selection pressure of primary antibiotic in the following cases: Amikacin in E. cloacae and E. coli, piperacillin/tazobactam in K.pneumoniae [30]. Among the isolated Enterobacter spp. 32.14% were detected as ESBL producers. A study in India [31], reported the prevalence of ESBL were 33.33% which are in agreement with the present findings. The prevalence of ESBLs among the Enterobacter spp. in Pakistan from different hospital ranged from 14.93% -79% [32]. In case of other members of Enterobacteriacae ESBL production rate has decreased. The prevalence of the ESBL producers had been decreasing over the last few years. Exact reason of such reduction of ESBL is not clear but it can be explained by the fact that the use of ampicillin and cephalosporin has been decreased due to resistant strains and the use of carbapenems and polymyxin has been increased by the physicians which might have some role in decreasing ESBL production. Moreover, the prevalence of ESBL producer varies with time as well as from country to country and even hospital to hospital [33].

Our study result shows Enterobacter species seem to be emerged increasing resistance to multiple antibiotics may be due to the pervasive and irrational practices of antibiotic prescription and use. In our study we have also identified a high colistin resistance rate in E. cloacae but not in E. aerogenes. Therefore, prompt action is recommended for proper infection control. More emphasis should be given on routine AMR surveillance and antibiotic stewardship programs for the better management of patients.

There are no conflicts of interest in this study