Children and elderly adults are two groups of highly susceptible to L. monocytogenes meningitis. Yet, there are differences between children and elderly groups in aspects of clinical manifestations, etiology and risk of severe factors [7]. Therefore, it is necessary to summarize the clinical features, etiology and risk of severe and mortality factors of Listeria monocytogenes in children. To improve diagnosis and treatment efficacy, we conducted a retrospective analysis of the clinical data of 14 pediatric patients with L. monocytogenes meningitis treated in the signal center hospital in Southwest China, from January 2012 to December 2016.

Among six non-neonates, one patient (aged 16 month; 12.5%) had patent ductus arteriosus (PDA) and rickets, two patients had neoplastic diseases (aged >12 years; 33.3%; one patient had non-Hodgkin’s lymphoma and the other patient had acute lymphocytic leukemia), and three patients (50%) had no detectable predisposing factor.

All patients received lumbar puncture and had pleocytosis, but five (35.7%) had neutrocytosis. The monocyte ratio in CSF ranged from 0 to 13%, and only one non-neonate had no monocytes in CSF. Biochemical changes in CSF included obvious reductions in glucose level (<0.2–2.5 mmol/L), normal or elevated protein levels (423–3540 mg/L), and normal chloride levels.

Two neonatal patients with critical illnesses underwent only cranial ultrasonography, and were found to have II-III grade intracranial hemorrhage. The remaining 12 underwent cranial computed tomography (CT) or magnetic resonance imaging (MRI), of whom five patients were normal results, three had hydrocephalus, three had widened lateral ventricle of which one experienced abnormal signals in the periventricular white matter and corpus callosum, and one had subdural effusion.

Three patients died (mortality, 21%), including two neonates and one 16-month-old child. The two neonates who died were preterm infants with maternofetal infection, of whom one neonate died 1 day after treatment and the other died 8 days after treatment. One non-neonatal patient received antibiotic treatment for the first 17 days and showed a slight improvement, but discontinued the treatment owing to financial difficulties. This patient developed hernia and died 7 days after treatment cessation. Apart from the three cases of death, one patient discontinued the treatment after 6 days, thus giving rise to incomplete data.

4.1 Differences in predisposing factors among patients of different age groups

Among the eight neonates, 87.5% were preterm infants and 50% had maternofetal infection. Positive blood culture results were found in all newborns, and only one newborn had a positive CSF culture. All evidences suggest that neonatal CNS infections were secondary to sepsis. Maternofetal infection is also an important predisposing factor for neonatal listeriosis. Therefore, not only the blood culture but also other secretions and aseptic humoral cultures can present with positive results of L. monocytogenes. Data analysis from the United States of Foodborne Disease Active Surveillance Network showed the incidence of L. monocytogenes infection in pregnant women to be 13 times higher than that in the overall population [10]. Lv et al. [11] reported that mother-to-child transmission was an important route for neonatal L. monocytogenes infection. Pregnancy-associated listeriosis is an invasive disease affecting both pregnant women and newborns that can lead to fetal losses and neonatal deaths as well as miscarriages in pregnant women and maternal death. Fetus acquires infection owing to transplacental migration of L. monocytogenes via the mother’s bloodstream. Previous studies have reported the sporadic incidence of L. monocytogenes in Chinese adults, resulting from mother-to-child transmission [12, 13]. Consistent with our current findings, listeriosis during pregnancy mainly manifested as fever (80%), WBC count elevation (78.6%), abdominal pain (30%), and gastrointestinal symptoms (13%); however, listeriosis in fetuses and newborns was likely associated with more severe symptoms, and consequently leads to fetal death, premature birth, neonatal sepsis, meningitis, and death [10, 14]. Thus, if pregnant women had infection indicators such as fever and elevated WBC and CRP levels before delivery, blood tests as well as blood and cervical secretion cultures and smears should be analyzed on a timely basis. If pregnant women had signs of infection combined with positive culture results, timely termination of pregnancy is recommended, and rapid culturing of multiple organ secretions (e.g., sputum, eye, ear, and vulvar secretions), blood, and CSF of newborns is warranted to improve the L. monocytogenes detection rates.

Among the six non-neonates, two had neoplastic diseases and one had rickets and PDA. The positivity rate of CSF cultures was higher than that of blood cultures in these patients. A previous study reviewed that 23 non-neonatal cases of L. monocytogenes meningitis had normal immune function, and 19 cases had negative blood cultures[15]. Unlike neonatal cases, the number of blood-associated infections was lower in non-neonatal cases.

4.2 Differences in clinical manifestations among patients of different age groups

Here, L. monocytogenes meningitis in neonates principally manifested as poor response, frequent apnea or tachypnea, birth asphyxia, and seizure, but only three neonates had fever. All neonatal cases had critical symptoms including respiratory failure, mechanical ventilation, refractory seizure, and multiple organ dysfunctions. Non-neonatal cases predominantly manifested as fever, vomiting, headache, and other meningitis symptoms (neck stiffness and bulging fontanelle). Only one non-neonatal case had critical symptoms. This result is distinct from that of neonatal cases.

Among the 14 study patients, 2 had a history of diarrhea, including one neonate and one non-neonate patient, thereby suggesting that L. monocytogenes infection is foodborne and likely causes intestinal infections.

4.3 Analysis of predisposing factors for death and prognosis

Three of the study, patients died (21.4%), including two neonates and one non-neonate. Death is likely associated with the following factors. (1) Maternal infection before delivery: the two newborns who died were premature and had maternofetal infection. Pregnant mothers of these patients presented with fever or diarrhea before delivery and elevated WBC counts and CRP levels; the vaginal secretion culture of one of those mothers even tested positive for L. monocytogenes. (2) Antibiotic treatment duration: an insufficient or incomplete antibiotic treatment course can lead to the death of pediatric patients, which was suggested by the outcome of a non-neonatal patient in our study. Although having received antibiotic therapy for 17 days, sudden treatment cessation led to the progressive development of a fulminant disease course with refractory seizure, coma, hernia, and consequent death 7 days later.

Unlike other forms of bacterial meningitis, infection of the central nervous system by L. monocytogenes can lead to meningitis/meningoencephalitis, ventriculitis, brain and spinal cord abscesses, brainstem encephalitis, and myelitis [16–19]. One of the fourteen pediatric patients in this study had abnormal subcortical and periventricular white matter signals. Even with early and effective antibiotic treatment, Listeria-associated meningitis and meningoencephalitis has an average case fatality rate of 24-26% [20,21].

Early diagnosis and timely treatment are extremely important for meningitis caused by L. monocytogenes commonly causes meningitis in newborns. One hundred and three cases of L. monocytogenes meningitis were reported in England and Wales between 1990 and 2013, and only 7.8% of the patients were infants older than 30 days [22].

Among eight neonates in this study, two neonates were initially treated with meropenem and ampicillin, while one neonate was treated with penicillin plus ceftazidime; their medications were only adjusted after establishing positive L. monocytogenes culture, which might have delayed the treatment and led to death. This suggested little awareness of listeriosis in newborns in Southwest China. Increased awareness of L. monocytogenes infection in high-risk newborns is warranted. If newborns <30 days old are suspected of having bacterial meningitis, administration of ampicillin, rather than third-generation cephalosporins, combined with meropenem is recommended [23]. Although L. monocytogenes infection in infants and young children is rare, L. monocytogenes meningitis should be considered when infants and young children have fever, headache, and vomiting accompanied by diarrhea and elevated monocyte counts in routine blood and CSF test results and when treatment with third-generation cephalosporins remains ineffective. 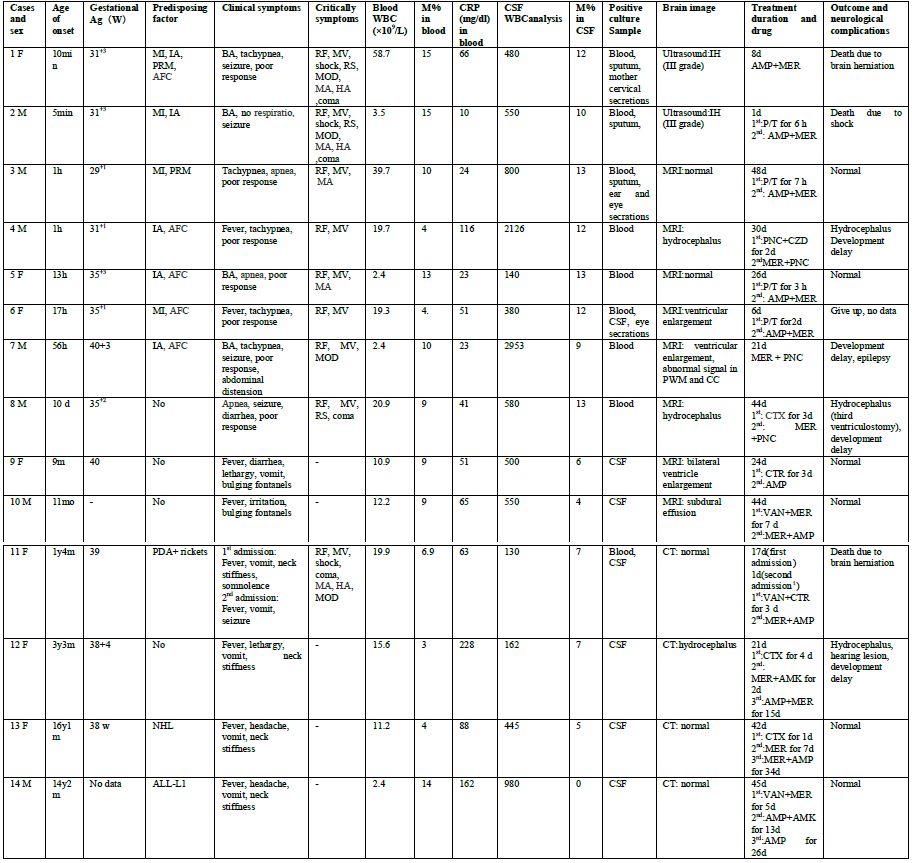