Spectrum of Bleeding Disorders In Pakistan: A Cross-Sectional Study

This is a cross-sectional study conducted to determine the frequency and spectrum of bleeding disorders in different regions of Pakistan and to improve facilities to cure them. Samples were collected from different regions of Pakistan. There bleeding presentation and history of the family were recorded. 435 patients were selected from the different regions of Pakistan; 318 male (73%) and 117 female (26%). Laboratory analysis included Prothrombin time, Activated partial thromboplastin time, Bleeding time, platelet counts and fibrinogen assay were performed. According to their results, vWF:Ag, vWF:RCo, inhibitor screening, Bethesda test, urea clot solubility test, and platelet aggregation test were performed to diagnosed bleeding disorders in patients. Out of 435 patients, 283 constitute CBD, 80 diagnosed with RBD, and 72 remain undiagnosed. Patients diagnosed with 52% hemophilia A, 1.4% with its inhibitor, 8.4% with hemophilia B, 0.35% with its inhibitor, 3.88% with VWD, 33.5%with its type III. A rare bleeding disorder is diagnosed in 80 subjects with 20% fibrinogen, 16.25% FXIII, 15% FVII, 11.25% FV, 10% vitamin k dependent factors, 8.25% GT, 5% FXII and epinephrine, 2.5% FII and FX and 1.25% FV + FVIII, BSS and FXI deficiencies. Clinical bleeding episodes varied in patients with respect to its deficiencies include gum bleeding, menorrhagia, hematoma, bruises, umbilical cord bleeding, hemorrhagia, and hemarthrosis. Study shows that hemophilia A is more frequent than hemophilia B. vWD type III has a higher prevalence. In RBD, fibrinogen deficiency is the most common, followed by FXIII, FVII, and FV respectively.

Haemophilia is a quantitative and qualitative X-linked inherited bleeding disorder. It is characterized as hemophilia A and hemophilia B with deficiency and defects of factor VIII and IX respectively with the frequency of about 1 in 5,000 and 1 in 25,000 [4]. Depending upon its factor level it categorized into severe (factor level <1 IU/dl), moderate (1-5 IU/dl), and mild forms (5-40 IU/dl) [5]. VWD is an inherited disorder of autosomal dominant or recessive pattern. It is characterized as a defect in von Willebrand factor (large multimeric glycoprotein) gene on chromosome 12 [6]. VWD is characterized as a quantitative defect of VWF as type I and III and type II as a qualitative defect of factor. VWD type III is the rarest but severe type and it is associated with the total absence of VW factor [7].

Bernard-Soulier syndrome is an autosomal recessive disorder that has a prevalence of 1/1,000,000 [8]. Platelets from BSS patients lack the major surface membrane glycoprotein complex, glycoprotein (GP) Ib-IX-V [9]. Glanzmann thrombasthenia is the most frequently diagnosed inherited disorder of platelet function with prevalence 1 per 10, 00,000 [10]. Patients with GT lack or have nonfunctional αIIbβ3 integrin [11]. Fibrinogen deficiency has a prevalence of 1 in 1,000,000. It is divided into types I (afibrinogenemia) and II (hypofibrinogenemia) on the basis of quantitative defect and dysfibrinogenemia and hypodysfibrinogenemia based on qualitative defect [12]. Prothrombin deficiency has a prevalence of approximately 1 in 2,000,000 [13]. Factor V [FV] deficiency has Prevalence of about 1 per 1,000,000 [14]. Combined deficiency of factor V and VIII are associated with mutations in the LMAN1 and MCFD2 genes [15]. Factor VII deficiency presents as a hemophilia-like bleeding disorder with an estimated prevalence is 1 in 300,000 - 500,000 [16]. Factor X has an estimated prevalence of 1 in 1,000,000 individuals [17]. Occurrence of factor XI is approximately 1 per 1,000,000 [18]. Factor XI, XII, XIII is also an inherited disorder and prevalence among the population. Vitamin K is required in the synthesis of factors like factor II, VII, XI, X, prothrombin and protein C, and S, which are the part of the coagulation pathway, its deficiency also serves as a bleeding disorder [19, 20] Approx. 1 in 2 million of the population is suffered from FII and FVIII deficiencies and 1 in 50,000 patients were recorded for FVII deficiency in a general population [21].

The aim of the study is to determine the frequency and spectrum of bleeding disorders in different regions of Pakistan and to improve facilities to cure them. 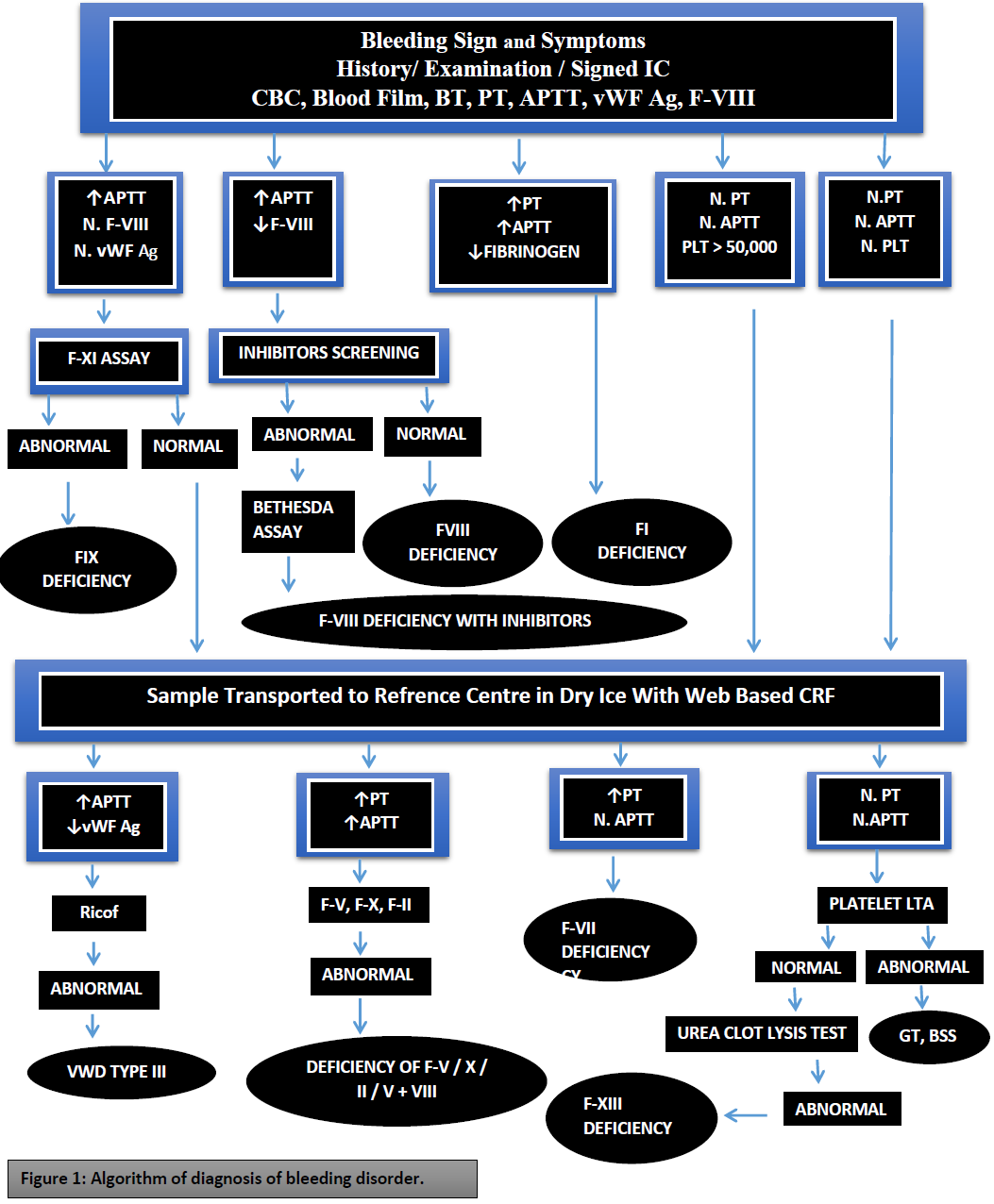 The study was carried out in the department of biochemistry, University of Karachi, Pakistan, and department of hematology, National Institute of Blood Disease and Bone Marrow Transplantation, Karachi, Pakistan. This cross-sectional multi-center study was coordinated from NIBD (hematology tertiary care center) in Karachi. Samples were collected from patients residing in urban and rural areas of the province of Sindh (NIBD and Fatimid foundation Karachi), Punjab [Chughtai’s laboratory and the Children’s Hospital Lahore (CHL)], Islamabad [Pakistan Atomic Energy Commission hospital (PAEC)] and Khyber Pakhtunkhwa (KPK) [Hayatabad Medical College (HMC), Lady Reading Hospital (LRH), Peshawar]. Some patients may either misdiagnosed or remain undiagnosed and labeled as bleeding disorder patients because there was a severe lack of diagnostic facilities in Pakistan. It is a cross-sectional study in which patients with a history of bleeding tendencies were selected and their history, symptomal bleeding episodes, and clinical findings were recorded. Data collected included a detailed history of bleeding, family history, and demographic data. The bleeding score was assessed using the Tosetto bleeding score method [22]. Samples were collected into trisodium citrate 0.109 M 3.2%. Initially, the samples were collected and processed at local reference centers and platelet-poor plasma was collected in labeled aliquots and then transported to study coordinating center (NIBD, Karachi) in different phases via maintaining cold chain aliquots that centrifuged at 1200-1500 x G for 15 minutes under a suitable temperature of about 18-25°C then samples were frozen at -40°C or -80°C for required time without loss of most hemostatic activity. Laboratory analysis included prothrombin time (PT), activated partial thromboplastin time (APTT), bleeding time (BT), platelet counts, and fibrinogen assay were performed. First-line coagulation profile including manual prothrombin time (PT) [23] and activated partial thromboplastin time (APTT) [24]. Bleeding time was determined using the Dukes methodology and fibrinogen levels by the Clauss method [25]. Patients with prolonged APTT were tested for factors VIII (FVIII) and IX (FIX). This was done using the one-stage APTT based factor assay [26]. If FVIII was low, von Willebrand factor: antigen (vWF:Ag) and von Willebrand factor: ristocetin cofactor (vWF:RCo) were performed. Inhibitor screening and Bethesda test are performed when FVII is low. When PT and APTT both were prolonged and fibrinogen is low, FV, FX, and FII were tested. Factors II, V, and X were tested using an assay based on PT. Factors II, V, and X were tested using an assay based on PT. 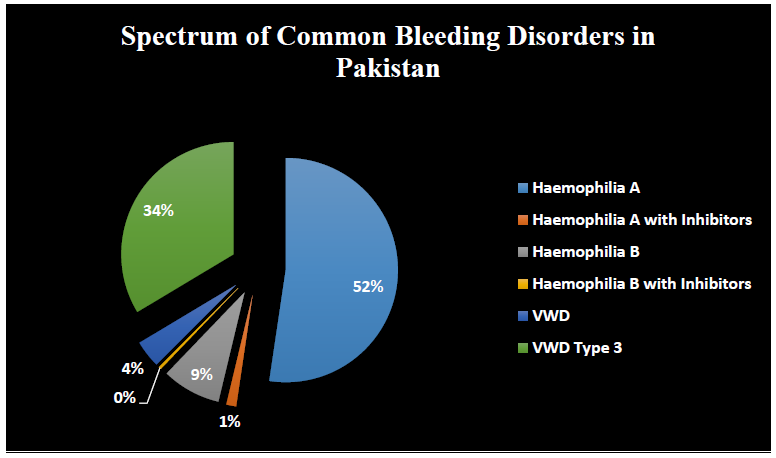 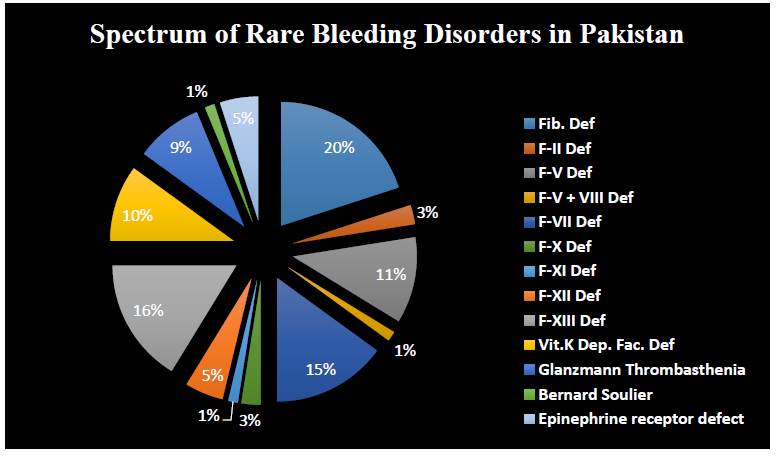 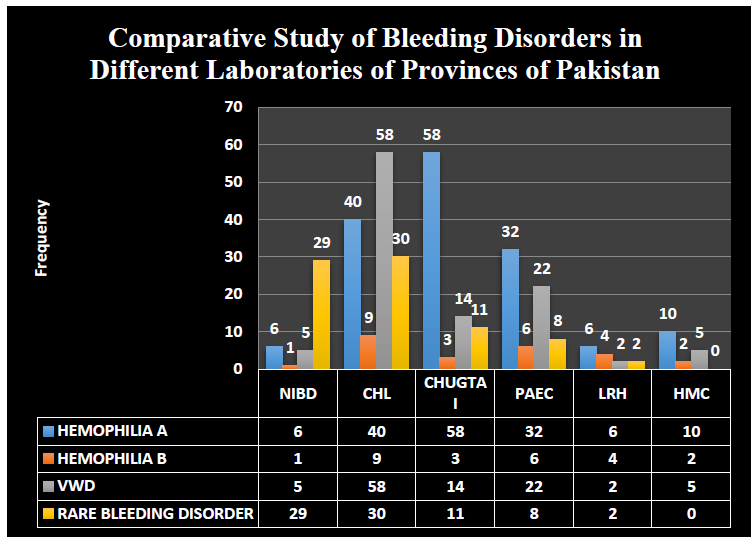 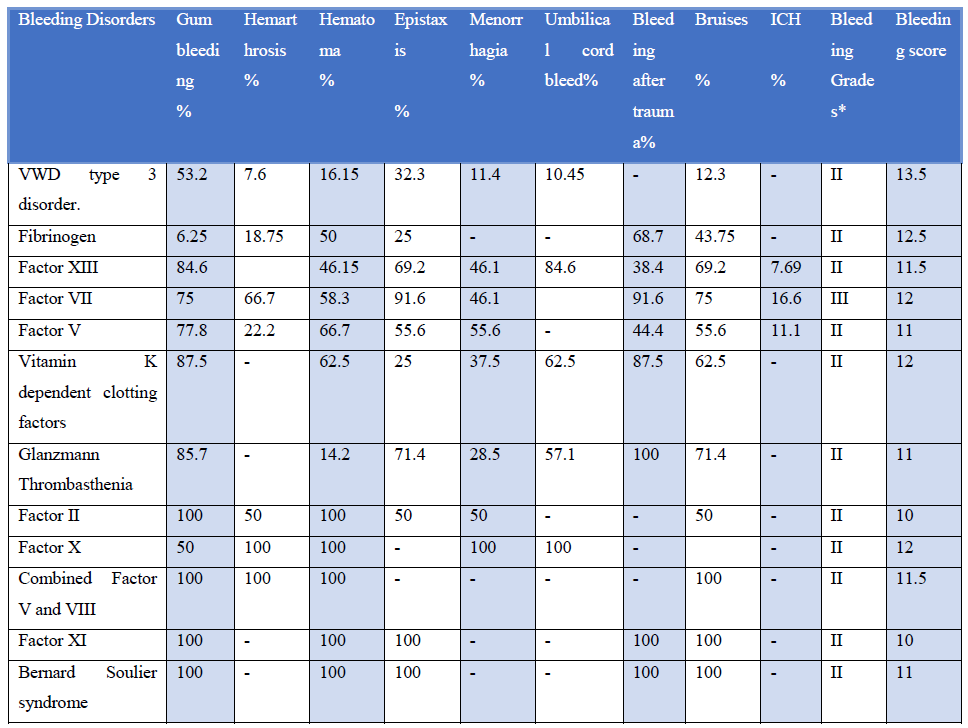 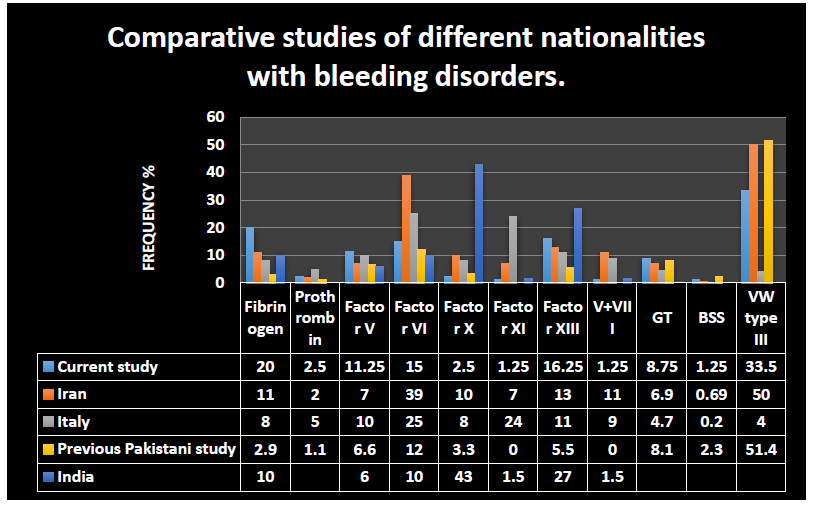 In Figure 5, we compared our results with a study conducted to investigate patients with recessively inherited coagulation disorders from Italy, Iran [1], and India [27] countries with high rates of bleeding disorders due to consanguineous marriages. In the present study out of 435 patients suspected of having a bleeding disorder, 80 were diagnosed as having rare bleeding disorders. After hemophilia A with 148 patients, vWD type 3 was the most common with 95 patients (33.5%), although, in a similar, local study, the percentage was 51.4% [28], in Iran, it was 50% and in Italy just 4% [1]. The second most common deficiency found in this study was fibrinogen deficiency in 16 patients (20%). In an earlier, local study, it occurred at a rate of 2.9% [28], 11% in the Iranian study, 8% in the Italian study [1], and 10% in the Indian study [27]. This bleeding disorder is a clinically important diagnosis in this geographical location because if diagnosed early it can prevent fatal bleeding episodes. GT, a relatively well-understood platelet disorder, was diagnosed in 7 (8.75%) of patients, the rate of diagnosis was 6.9% in the Iranian study, 4.7% in the Italian study, and 8.1% in an earlier Pakistani study.

It can be concluded from this data that hemophilia A is considered to be highly prevalent among all bleeding disorders. Hemophilia A is more frequent than hemophilia B. VWD type 3 has the highest incidence amongst the ARBDs in our study cohort followed by fibrinogen deficiency. Glanzmann thrombasthenia was found to be the third most common disorder among ARBDs. The incidence of autosomal recessive bleeding disorders in this region is higher than previously thought.