Study of the Influence of Larval Life on the Sensitivity of the Adult Stages of Anopheles gambiae s.l. to Deltamethrin in the North Cameroon Region

1Faculty of Sciences, University of Yaounde I, Cameroon

2Research Institute of Yaounde, OCEAC and University of Douala, Cameroon

4Center for Research on Infectious Diseases and University of Douala, Cameroon

6Faculty of Sciences, University of Yaounde I, Cameroon

The present research aims to evaluate the influence of larval life on the sensitivity of the adult stages of Anopheles gambiae s.l. to deltamethrin in the North Cameroon Region. In fact, physico-chemical analyzes were carried out in the water of the breeding lodges and insecticide tests were carried out on two sub-populations of Anopheles gambiae s.l. Thus, specimens of Anopheles gambiae s.l previously reared in the water of their original roosts are more resistant than those reared in spring water, with an average difference of 18.65 ± 10.15% mortality in more impacted urban area; 10.99 ± 7.98% in semi-urban areas and 5.28 ± 5.78% in less impacted rural areas. The capacities of Anopheles have increased with the level of urbanization and suggest the impact of the environment through the quality of the water in the lodgings in increasing resistance to insecticides. These results constitute avenues allowing the implementation of well-coordinated anti-vector strategies.

Water represents about 71% of surface of the planet Earth [1, 2]. It is useful as a resource but also as a living environment. However, during last decade, Man through his activities has degraded the natural quality of the water, disrupting his living conditions; its balance, thus compromising its use. These ecological disturbances concern in particular the disappearance of certain species and the adaptation of others leaving strong colonizing power [3]. Among the latter are those which cause many health problems such as Anopheles, responsible for the transmission of malaria. Despite progress made towards achieving the goals of the Global Technical Strategy for Malaria 2016-2030, the number of malaria cases was estimated at 445,000 in 2016 [4]. This situation is exacerbated by the resistance of mosquitoes to insecticides used in impregnating mosquito nets or in indoor spraying as the main means of mass prevention, especially in urban areas and areas with intensive agricultural activities [5-7]. Indeed, the roosts in which mosquito larvae develop are particular ecosystems often exposed to significant environmental disturbances caused by the accumulation of chemical pollutants.

Epidemiologically, vector resistance to insecticides could lead to a significant increase in malaria incidence and mortality [4]. Actors in the fight against this disease must take urgent measures for the sustainable management of insecticide resistance, so that existing vector control interventions remain effective. These measures require a better understanding of the influence of environmental conditions on the development of resistance in malaria vectors, in particular the study of the larval ecosystem. Indeed, the use of ecological approaches makes it possible to better understand the possible dysfunctions of anthropized spaces [8]. It is important to study the influence of environmental factors on the entomological profile of malaria that this study was conducted.

The study was conducted over a 4-year period, from 2012 to 2015. Anopheles larvae and larval development milieu were sampled from September to October of each year. This period correspond to the end of the rainy season in the North Region during the high malaria transmission period marked by the proliferation of excellent breeding sites for mosquitoes.

The North Cameroon Region extends between latitude 8° and 10°E and between longitude 12° and 16°N. It is characterized by a warm and dry tropical climate with increasingly limited rainfall as Lake Chad approaches [9]. Indeed, this Region is characterized by two seasons during the year: the dry season, which extends from October to May with temperatures varying between 35°C and 40°C; the rainy season, from June to September with temperatures around 32°C [10]. The soil represents a classic topo-sequence of the “Bénoué” Valley, ranging from tropical ferruginous soils with sandy texture to silty-textured alluvial soils with temporary hydromorphic [11]. The vegetation consists of wooded savannahs, dry forests; Sahelo-Sudanian steppes and periodically flooded grasslands [12]. The main products of agriculture are sorghum, millet, cotton, maize, rice, groundnuts, cowpeas and vegetables, and the main livestock products are cattle, goats, pigs and poultry [13]. Three major crop structures dominate: traditional systems, especially in rural areas. Here, crops are limited to self-sustaining food crops (sorghum, millet, groundnuts, cowpeas, melons and various vegetables), which are often grown in combination and fertilizer use is low [13]. The framed system and market gardening systems that coexist, especially in semi-urban and urban areas where vast fields of rice and cotton dominate with the use of pesticides.

The study was conducted in 17 geographical areas called clusters; these were grouped into 3 categories according to their level of urbanization (Table 1) as urban clusters, semi-urban clusters and rural clusters.

Table1: Caracteristics of the categories of the study sites. 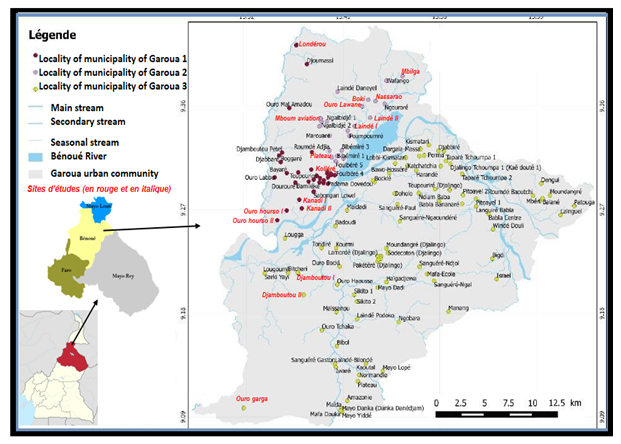 Data collection concerned the collection of morphometric and environmental variables for each deposit; collecting stage 1 larvae of Anopheles gambiae s.l. in the lodgings according to the OMS protocol (2017), transporting them to the laboratory. Once in the laboratory, the harvested larvae were separated into two batches of equal parts. The first batch was raised in tanks containing water from the original deposit, while the second batch was raised in tanks containing a standard medium (spring water) favorable to the development of sensitive strains of anopheles in the laboratory and of known physico-chemical properties (Table 2). The two batches of larvae were fed daily with TetraMinBaby®, feed for fry [15].

Nymphs from larvae harvested in the field were transferred to cages covered with mosquito netting, depending on their breeding environment and where they were collected. Adults from nymphs were fed a 10% glucose solution. Deltametrine mortality testing of An. gambiae s.l. were evaluated using the OMS standardized protocol [15].

Table 2: Values of the physico-chemical parameters of spring water.

Analyzes were performed using SPSS Version 19.0. Multiple Correspondence Analysis (MCA) compared the study areas, the environment and the types of heel. The comparison between the means was evaluated using ANOVA or Kruskals Wallis analysis in the event of unequal sample variances (P <5). The results of the sensitivity tests were interpreted according to the OMS criteria (Table 3).

Table 3: OMS (2017) [15] criteria for the interpretation of the results of insecticide susceptibility testing.

Results show that, the most dominant deposits were the puddles and ponds which alone total 44/63 deposits. In urban areas (Table 4), the dominant deposits were the puddles (16 deposits/21). The depths varied from 5 to 36 cm; the areas from 1 to 40 m2 and the nature of the soil being most often muddy. Their immediate environment was the regular roads and residential houses. In addition to these elements raised, MCA (Figure 1) shows that the lodgings located in urban area are distinguished from other types of lodgings by the presence of gutters, an environment sometimes swampy or industrial (SODECOTON who is Cameroon Cotton Development Company).

In a semi-urban environment (Table 5), the most dominant deposits were the ponds (10 deposits/24) and the crop furrows (08 deposits/24). Their depths varied from 5 to 160 cm; their surfaces varied from 2.5 to 500 m2; the soil was generally muddy and/or clay and their immediate environment was generally the roads and vegetation, especially rice fields. MCA shows that in addition to these elements we find in semi-urban areas other types of breeding grounds like ceanes and calm place of river; sometimes garbage dumps as an environment.

In rural areas (Table 6), the nature of productive roosts was more diversified (ponds, puddles, crop furrows, traces of hooves and gutters); these had depths varying from 7 to 40 cm with surfaces varying from 8 to 600 m2 and the soil being generally clay. Their immediate environment was regularly marked by vegetation, especially various cultures. 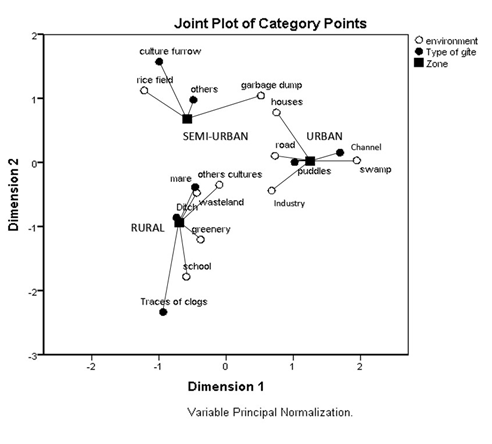 Figure 2: MCA of characterization of the study area, the environment and the type of roost.

3.2 Profile of the resistance of populations of Anopheles gambiae s.l. to deltametrine 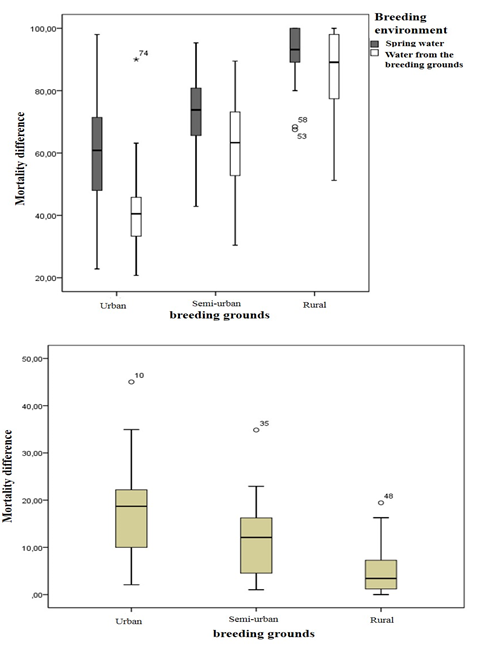 Figure 3: Changes in the sensitivity of An. gambiae s.l to deltamethrin under field and laboratory conditions. A = mortality rate; B = Mortality difference.

This study revealed that the environment of breeding sites characterizing the level of urbanization and impacting on the living environment (water) of mosquito larvae, influence the development of resistance to An. gambiae with insecticides in North Cameroon. In urban areas, puddles contribute more to the development of An. gambiae s.l. larvae. The cause is, in part, the poor maintenance of the urban water network which favors the presence of puddles. These same observations were made by Darriet et al (2014) [16] in the town of Maroua in the Far North of Cameroon. While in semi-urban areas, it is much more the ponds and furrows of crops because of the numerous rice fields present and the reservoirs used to water crops in the dry season. This is what justifies why in an unstable malaria zone, rice cultivation could lead to deadly epidemic outbreaks affecting all age groups of the population [17]. In rural areas, the ecosystem is little modified by humans and no specific environment is released in contributing to the development of anopheline larvae. The presence of muddy soil in most of the deposits would be due to the decomposition of the organic matter present in the environment because the soil of the North Cameroon Region naturally consists of clay, sand and silts [11].

The results obtained on the tests for sensitivity to deltamethrin show that the specimens bred according to the usual conditions of breeding in the laboratory, that is to say in spring water, are resistant. These results are a continuation of those obtained by Chouaibou et al. (2008) [6] who mentioned the beginning of resistance to Deltamethrine in the same areas. Evidence that over time, the adaptive capacities of Anophelian populations to insecticides have increased during the period between his study and ours. This is in line with the results obtained by Mandeng et al. (2019)  [18], who demonstrated that between 2011 and 2015, resistance to deltamethrin in populations of An. gambiae s.l. from North Cameroon increased. Likewise, by raising the larvae in the water of their original roost, the resistance is higher than when the larvae are raised under normal laboratory conditions. This means that the larval environment contributes to the immediate increase in the adaptive capacities of mosquitoes when they are adults, to insecticides. These two observations suggest with Boyer (2006) [3] that, environmental disturbances constitute a selection criterion which appears to be the combined result of a complex short-term pre-adaptation process and longer-term selection.

Furthermore, it has been reported in our study area that the resistance mechanisms involved are based on metabolism [5, 19]. Thus, insecticides act as a force of selection which gradually concentrates the genetic factors favorable to the survival of the species [16]. When insecticide applications are constant over time, susceptible individuals (SS) become scarce, giving way to a population in which the frequency of resistance genes (RS and RR) is proportional to the intensity of the pressure of selection [16]. Otherwise, suggestions have been made that environmental disturbances due to the use of insecticides alone or in combination with other pollutants of human origin and natural or anthropogenic xenobiotics would expose larval mosquito populations to strong chemical disturbances who increasing their ability to control oxidative stress and other general metabolic disorders, with a suspected side effect on tolerance to insecticides [20, 3, 5]. This is the reason why mosquitoes from roosts located in urban areas, more polluted were the most resistant to deltamethrin followed by the semi-urban area. In less anthropized rural areas, pocket of sensitivity have even been obtained. These results confirm those of Nkya et al. (2014)  [21] in Tanzania.

These studies have shown that the larval environment influences the adaptive capacities of adult anophelines to insecticides. These immediate capacities increase with the environmental stress of the deposits caused by uncontrolled urbanization.