The pathogenic encapsulated yeasts in the genus Cryptococcus remains one of the most important opportunistic fungal pathogens in Acquired Immunodeficiency Syndrome (AIDS), more than 80% of the total cases worldwide [1]. Cryptococcal infections are caused by encapsulated fungi Cryptococcus gattii and C. neoformans [2]. C. neoformans usually infects the central nervous system (CNS) and/or lungs with typical clinical manifestation [3]. Asymptomatic Cryptococcal meningitis in the setting of Cryptococcal pneumonia is a rare finding in patients with Human Immunodeficiency Virus (HIV). We report a case of a young woman with AIDS who presented with symptoms of pneumonia and was subsequently found to have subacute cryptococcal meningitis.

27 years old female with past medical history of Acquired Immunodeficiency Syndrome (AIDS) since 2012 not on HAART, hypertension and asthma presented to the emergency department with complaints of chronic productive cough with yellow phlegm for 6 months, worsening shortness of breath, subjective fever, night sweat, poor appetite, weight loss and wheezing for 1 day. Patient states that she had a recent admission in an outside hospital in November 2018, she was diagnosed with Cryptococcal meningitis and Fungemia. The patient reported that she received multiple lumbar puncture, denied bronchoscopy or other procedures performed. On reaching out to the hospital, she was started on Flucytosine and Amphotericin B with serial lumbar puncture until normal pressure of cerebrospinal fluids (CSF) (48>27>31>11). Bronchoscopy wasn’t done due to the patient left the facility against medical advised (AMA). The patient was discharged on Bactrim and Fluconazole for 8 weeks.

Meanwhile, the patient was receiving treatment with Flucytosine, Amphotericin B and Cefepime. She underwent serial therapeutic lumbar puncture for 14 days. Despite the treatment with antifungal and serial LP, the patient had persistently raised CSF pressure. She did not complain of neuropsychiatric symptoms or signs such as neck stiffness, headache, dizziness, photophobia, lethargy, altered mental status, personality changes or memory loss. Brain CT was negative for hydrocephalus. Neurosurgery was involved for placement of lumbar drain or ventricular drain, either directly draining externally or a ventricular-peritoneal shunt. Ophthalmology was consulted to assess for papilledema, which was negative. As the patient was asymptomatic denied headaches, visual changes, or symptoms associated with elevated intracranial pressure (ICP) V-P shunt was not performed.

The WBCs was serially followed, which showed a drop of all cell line after induction treatment with Flucytosine, Amphotericin B and Cefepime. The patient remained asymptomatic during the entire clinical course. The final report of BAL analysis: Grocott stain positive for yeast form fungal microorganisms, Cryptococcus. The mucicarmine stain showed highlights organism with positive capsular staining supporting the possibility of Cryptococcus infection. The patient didn’t complete the treatment, she left the facility against medical advised (AMA) and was lost follow-up. 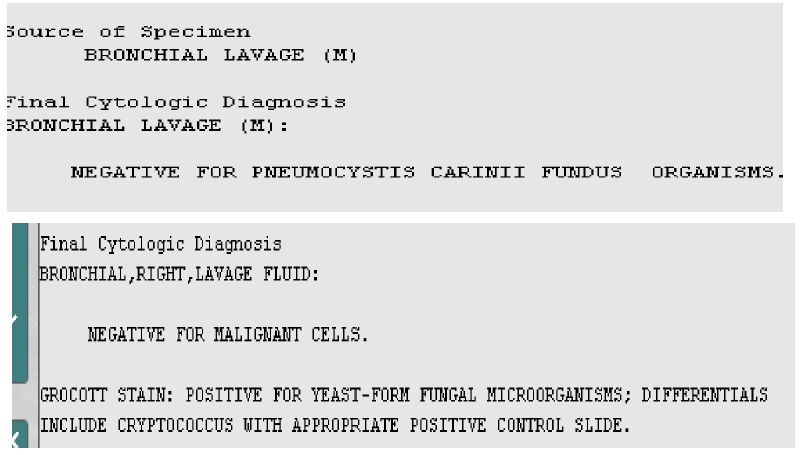 Cryptococcal infection is acquired from the environment by inhalation of aerosolized infectious particles into the airways, mostly common in immunocompromised patients. [7] [9]. The global burden of Cryptococcosis was recently estimated about ~1 million cases, with > 6000,000 death annually. Thus Cryptococcus are important human pathogens. [6] [9].

The spectrum disease caused by Cryptococcus species consists predominantly of meningoencephalitis and pneumonia, but skin and soft tissue infections can occur. Cryptococcus can affect any organ. CNS involvement presents as signs and symptoms of chronic meningitis, such as headache, fever, lethargy, sensory deficits, memory, cranial nerve paresis, vision deficits and meningisms. [9]. The mechanism by which the fungus undergoes extra pulmonary dissemination and enters the central nervous system (CNS) remain poorly understood. The mechanism by which cryptococcal cells cross the blood-barrier is a subject of intensities study. Current evidence suggests that both direct fungal-cell migration across the endothelium and the fungal cell carriage inside macrophages as “Trojan horse” invaders can occur. The cryptococcal capsule is anti-phagocytic, and the capsular polysaccharide has been associated with numerous deteriorus effects on host immune function. [1] [9].

Pulmonary cryptococcosis is an important opportunistic invasive mycosis in immunocompromised patients, but it is also increasingly seen in immunocompetent patients. [8] Usually presents as cough, fevers, increased sputum production and chest pain as in this patient. [9]. In contrast to cryptococcal meningitis, pulmonary cryptococcosis is still underdiagnosed because of limitations in diagnostics tools. It can mimic lung cancer, pulmonary tuberculosis, bacterial pneumonia and other pulmonary mycosis both clinically and radiologically. [3] [8]. Patient with C. gatti presents with granulomatous pulmonary masses (cryptoccocomas). Like CNS disease pulmonary cryptococcosis can follows an indolent course and the majority of cases do not come to clinical attention. Many cases are discovered incidentally during the work-up of abnormal chest X-rays obtained for other diagnostic purpose. [8]. Interestingly, this case presented with diffuse tree in bud infiltrates in lower lobes. Pathological confirmation is important to establish the definitive diagnosis. [7]. In our patient the bronchoscopy did not show any endobronchial lesion, cytology was negative for malignant cells.

Early diagnosis of cryptococcal infection is the key to improving outcomes. Traditionally cryptococcal infection has been diagnosed by India ink microscopy on cerebrospinal fluid (CSF), culture or latex agglutination for cryptococcal antigenaemia. [1]. CRAg detection in CSF and blood provides strong presumptive evidence for crytococcosis, however because the result is often negative in pulmonary cryptococcosis the test unless useful in pulmonary disease and is only limited usefulness in monitoring the response of therapy. Mycological culture of CSF is considered the Gold standard diagnostic method, it is usually positive 48/72h for antifungal naïve patients or longer (up to 4 weeks) for patient on antifungal therapy. [1] [9].

The treatment of Cryptococcal infection consist of induction ad maintenance antifungal therapy. Failure to adhere to this regimen cause relapse and recurrence of the disease. Our patient presented with partially treated cryptococcal meningitis due to her non-compliance with treatment regimen. Hence she failed to manifest clinical signs and symptoms of cryptococcal meningitis. This case, thus portrays the importance of detailed history taking, examination and considering bronchoscopy and CSF studies in immunocompromised patients with previous partially treated cryptococcal pneumonia and meningitis.