The appearance of tuberculosis primarily in the sternum or lymph nodes is a condition that causes difficulties and delays in diagnosis. Few cases have been reported in the literature. A 56-year-old male patient with diabetes presented with a complaint of swelling that had been growing for 6 months in the right axillary region and on the sternum. Various antibiotic treatments were applied for these swellings but no response was received. It was learned that the patient complained of fever from time to time, and had no complaints of night sweats and weight loss. On physical examination, fever was determined at 37.5 ° C, 10x6 cm, hard consistency, mobile, painless mass located on the right axillary fossa, and a hard mass, fixe, painful mass on the manibrium stern. There was no hyperemia, temperature increase and fluctuation on the masses. In the computed thorax tomographic examination of the patient, necrotic soft tissue was observed in the mediastinum and bilateral hilar region, causing lymphadenopathy and destruction of bone structure. Since fine needle aspiration biopsies from the right axillary region and over the sternum were not diagnostic, the right axillary mass was completely removed and an excisional biopsy was performed on the sternum. It was compatible with tuberculosis as a result of histopathological examinations of the pieces sent.

Tuberculosis is highly controlled in developed countries. In developing countries, it has become an important health problem due to the increase in the incidence of human immunodeficiency virus (HIV) and migration to developed countries [1]. According to the report published by the World Health Organization (WHO) in 2019, 10 million new tuberculosis patients appeared in 2018 and 1.5 million people died due to tuberculosis [2].

Tuberculosis bacillus, M. Tuberculosis, is located in the lungs 80%, and 20% extrapulmonary. Non-pulmonary tuberculosis may occur with an acute clinical picture, and may occur many years after primary infection. HIV infection is more common in conditions that weaken the immune system, such as diabetes, kidney failure, cirrhosis [3].

In the pathogenesis of non-pulmonary tuberculosis, infectious secretion causes infection in the respiratory tract and gastrointestinal tract, and the spread of tuberculosis bacillus through lympho-hematogenous and close relationship plays a role [4].

After lung and pleural involvement, the most common involvement is the lymphatic system, often the cervical and supraclavicular lymph nodes are involved [6]. Clinical and radiological findings vary depending on the organs involved. Especially in patients with suppressed immune system, different clinical findings and radiological appearance of tuberculosis may complicate and delay diagnosis [7].

We aimed to present our 56-year-old male patient with diabetes who was diagnosed as bone tuberculosis and tuberculosis lymphadenitis as a result of the examinations, which suggests primarily chest wall malignancy and infection clinically and radiologically.

A 56-year-old diabetic male patient presented with a complaint of swelling in the right axillary region and over the sternum. It was learned that the swelling that started in the right axillary region and on the sternum occurred approximately 6 months before the history, various antibiotic treatments were applied for these swelling but no response was obtained. During this period, it was learned that he had complaints of fever from time to time, and that he had no complaints of night sweats and weight loss. In his physical examination, fever was determined at 37.5 ° C, approximately 80x60 mm, hard, mobile, painless mass located on the right axillary fossa, and a hard consistency, fixe, painful mass on the manibrium stern. There was no hyperemia, temperature increase and fluctuation on the masses. In laboratory examination; White blood cells 7.90x103 / UL (28.2% lymphocyte, 10.4% monocyte, eosinophil 4.4%), hemoglobin 12.5 g / dL, sedimentation rate 51 mm / hour, C-reactive protein (CRP) 2.40 mg / L. Blood biochemistry was within normal limits. Parenchyma was evaluated normally in the radiological images of the patient (figure 1,2). 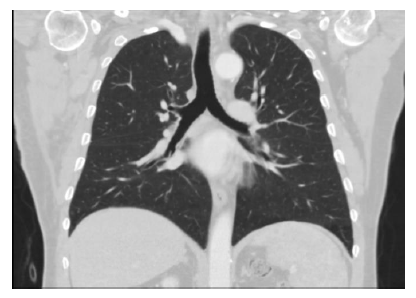 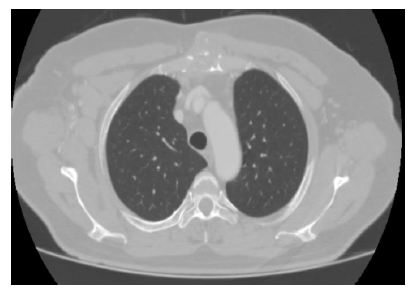 In thorax computed tomography (CT) examination; lymph nodes with a short diameter of 1 cm in the mediastinum and bilateral hilar region, the size of which is 28x19 mm in the right axillary fossa, the hilar fat content of which is not selected, multiple, conglomerate lymph nodes (figure 3,4). 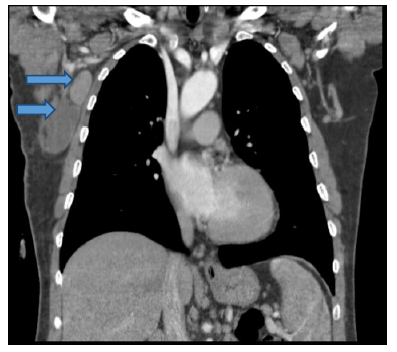 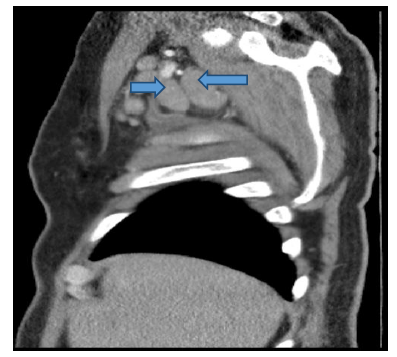 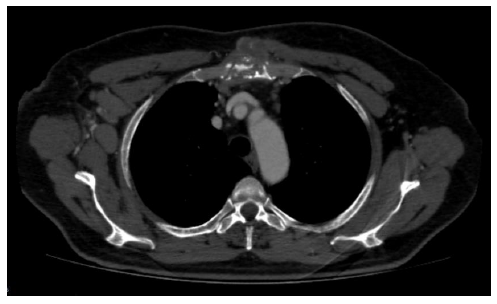 Figure 5: CT image of the lesion causing destruction in the sternum

Fine needle aspiration biopsy (FNAB) from the mass located in the right axillary fossa was not diagnostic. The mass was then excised totally. The pathology of the extracted mass was reported as caseified granulomatous lymphadenitis containing CD68 (+) and cytokeratin (+) conglomerated lymph nodes in immunohistochemical assay. In the immunohistochemical examination of the FNAB result from the mass on the sternum, TTF-1 (-) came as P40 (-). In the serial sections of the microscopic examination of the sample taken, calcification and necrosis in the middle. In the vicinity, granuloma formations containing epiteloid histiocytes and multinuclear Langhans type giant cells were observed. According to these findings, it was reported to be compatible with tuberculosis.

According to the result of the pathology, antituberculosis treatment with isoniazid, rifampin, pyrazinamide and ethambutol 4 was started. M. Tuberculosis also reproduced in the cultures of the samples. Treatment and follow-up of the patient continues.

Tuberculosis is one of the oldest known diseases in human history. It is a preventable and treatable disease. Being late in the diagnosis of tuberculosis not only makes the treatment of this disease difficult, but also increases its spread in the society. Diagnosing tuberculosis is not always easy. In the absence of specific findings, both radiologically and clinically, it becomes difficult to diagnose when acid-resistant bacilli (ARB) cannot be produced in textiles and culture [8]. Various studies have shown that tuberculin skin test positivity varies between 20-80% in cases of extrapulmonary tuberculosis, chest radiography is above 50%, and other reasons that make the diagnosis difficult. It should be kept in mind that the negative tuberculin test and normal chest x-ray will not eliminate the possibility of tuberculosis. Routine biochemical and hematological examinations are generally not specific, do not help diagnosis. There may be abnormal findings such as high erythrocyte sedimentation rate, anemia, leukopenia or leukocytosis, thrombocytopenia [9].

Aydogdu K. et al. A 33-year-old woman with increasing swelling and pain complaints in the right chest posterolateral for the last 3 months examined the patient. On the chest X-ray, they detected bilateral hilar fullness and minimal pleural effusion on the right. In Magnetic Resonance Imaging (MRI), they detected a soft tissue mass approximately 5x6 cm in size extending from the 8th intercostal space to the diaphragm in the posterior, and diagnosed tuberculosis by performing an excisional biopsy [10].

Our case was a 56-year-old diabetic male patient. A growing mass was detected 6 months ago on the right axillary fossa and sternum. Lung parenchyma was normal in the imaging. There were no radiological findings to suggest infection, malignancy and tuberculosis. In thorax CT, multiple lymph nodes with a short diameter of 1 cm were detected in the bilateral hilar region and mediastinum. Multiple, conglomerated lymph nodes measured 28x19 mm in the right axillary fossa and at the level of corpus sterni manibrium stern junction, a 35x25 mm measured necrotic soft tissue that caused marked destruction in the bone structure was observed. These findings primarily suggested malignancy and metastasis. No pathology was observed on abdominal ultrasonography. FNA was performed from lesions in the axillary region and on the sternum. Since the biopsy results were not diagnostic, the mass in the right axillary region was totally removed. The result of histopathological examination of the mass was reported as chronic granulomatosis lymphadenitis compatible with tuberculosis.

Eren and Avci examined the patient who had chest pain that lasted for 6 months and a mass complaint growing in the anterior chest wall. On physical examination; They detected a hard, painful mass on the upper part of the sternum. In the laboratory examination, they found the sedimentation value of 70 mm / hour. In thorax CT, a 4x3 cm mass lesion was detected in the sternum, and they did not find any radiological pathology in the lung parenchyma. The patient underwent FNAB from the mass, and after the pathology was normal, the mass was removed by surgery and diagnosed primary sternum tuberculosis [11].

In our patient, the mass in the right axillary fossa was rigid, mobile and painless. The mass on the sternum was stiff, fixe, painful. There was no hyperemia, temperature increase and fluctuation on the masses. There were no symptoms such as cough, fever, weight loss, weakness, anorexia, and there was no evidence to suggest tuberculosis. In laboratory examination, hemogram and biochemistry values were observed within normal limits. The sedimentation rate was 51 mm / hour, C-reactive protein (CRP) 2.40 mg / L. The conglomerated LAP in the right axillary fossa and the mass on the sternum primarily suggested malignancy, metastasis and infectious diseases. The FNAB result from the mass was not diagnostic. Excisional biopsy was applied to the lesion on the sternum. The taken pieces were sent for specific culture and pathological examination. After the excisional biopsy pathology result obtained here was compatible with tuberculosis, the patient was diagnosed with Non-pulmonary tuberculosis and 4 antituberculosis treatment was started.

In tuberculosis radiologically, in 95% of cases, the lesion is seen in the superior segments of the upper lobes [12]. Atypical location is observed more frequently in cases such as diabetes mellitus (DM), pregnancy, kidney failure, liver failure, and corticosteroid use [13]. 1/3 of the lesions may appear in the form of cavity, bronchopneumonic miliary appearance, fibrocalcified lesions and tuberculoma [14].

Our case had a history of diabetes mellitus disease that would cause immunosuppression. If there is no shrinkage in lymph nodes despite the treatment, drainage of abscessed and fluctuating lesions, and total surgical excision can be planned in fistulized lesions [20].

In our case, the diagnosis was made by defining the result of histopathological examination of the samples taken from the mass on the sternum and right axillary lymph nodes as compatible with tuberculosis, as chronic granulomatosis lymphadenitis and the growth of M. tuberculosis in the specific culture.

Informed consent was obtained from all individual participants included in this study.

All procedures performed in study involving patient with the 1964 Helsinki declaration and its later amendments or comparable ethical standards.