The aim of this study was to assess the exposure of the population of Monrovia to Heavy metals (Arsenic, Cadmium, Chromium, Lead, Mercury and Nickel) through the consumption of rice and the health risk posed. A total of forty one (41) imported and nineteen (19) locally cultivated rice samples were collected from major markets in Monrovia. A mixture of nitric, per chloric and sulfuric acids were used for complete digestion of the samples and the levels of the metals were determined using ICP-MS and AAS techniques. Dietary exposure of the consumers to the metals was assessed by comparing the Estimated Daily Intake (EDI) to the Provisional Tolerable Daily Intake (PTDI) of the metals, and the potential non-carcinogenic health risk was assessed using Hazard Quotients and Hazard Indices. Carcinogenic health risk from Arsenic was assessed by using Incremental Lifetime Cancer Risk values. Incremental Lifetime Cancer Risk values were less than the US EPA threshold value of 1.00E-04. Hazard Quotients and Hazard Indices for all the metals were less than US EPA permissible value of 1; suggesting that the consumption of the products constitute no potential individual or combined health risk to the population with regards to the tested metals. Although the current levels of heavy metals in the products are negligible, regular monitoring of contaminant levels is highly recommended.

Rice is the second most cultivated cereal and the third most worldwide produced crop behind wheat and maize. It is the staple food for most of the world’s populace and the leading dietary energy provider [1]. In Monrovia, it is the widely consumed crop. In recent years, there have been growing concerns over the contamination of the crop by heavy metals. Many industrial processes and other anthropogenic activities can lead to contamination of agricultural soil with heavy metal. Metals in soil can enter the food chain by bio accumulating in edible vegetables and crops [2]. High dietary exposure to heavy metals from rice has been reported in literature [3-6]. Like in plants, heavy metals such as As, Cd, Cr, Pb, Hg and Ni can accumulate in human tissues and organs such as livers, bones, and muscles; and pose serious health effects [7]. Arsenic is very carcinogenic and causes arsenicosis, forms complexes and hinders the production of Adenosine Triphosphates during respiration. Cadmium affects the bone and caused kidney and renal disorder in human. Mercury is known to cause gastrointestinal disorder, acrodynia diseases, brain and central nervous system damages. Nickel induces mutagenesis, inhibits DNA excision repairs, causes chromosome damage and several allergic reactions. Chromium is noted to cause skin cancer, lungs ailment and liver damages; whereas Lead has the ability to cause anemia, weakness in muscles, lethargy and paralysis [8, 9].

One of the major ways the general population can be exposed to heavy metals is through the consumption of contaminated crops and vegetables as food [10]. This path of exposure has intensified the need for quality and safety monitoring of food. This is done in order to protect human against the adverse health effects of these metals through dietary consumption. Prior to this study, no previous study had ascertained the health risk posed to the population of Monrovia from the consumption of heavy metal contaminated rice. The different types of rice consumed by the inhabitants of Monrovia may have contained heavy metals above recommended levels that would have caused serious health effects to the population. Therefore, this study was relevant as it provides a useful reference data for future research as it relates to the dietary exposure and health risk from heavy metal to the population through the consumption of the nation’s staple food, rice.

A total of forty-one imported and nineteen locally cultivated rice samples comprising of twenty and nine brands respectively, were randomly purchased from six major markets in Monrovia, Liberia. Samples were collected based on production dates and batches within each brand and were representative of all commercially available rice brands on the Liberian markets during the sampling period. Brands collected are widely consumed in the city. Table-1 lists the rice brands sampled in this study.

Table 1: List of rice brands sampled in this study.

Samples were washed, air dried, pulverized and then digested using a mixture of nitric, per chloric and sulfuric acids in an open flask digestion procedure [11]. In the procedure, 1 g of pulverized sample each was weighed into a 50 mL graduated digestion flask, and 1 mL H2O, 4 mL (1:1) HNO3 -HClO4 and 5 mL H2SO4 were added in turns to the sample in the flask. The flask with contents were then inserted into an aluminum heating block and placed on an electric hotplate set at 200°C until clear transparent solutions were obtained. They were then removed from the hot plate, allowed to cool and diluted to the 50 mL mark with deionized water. Digestion blanks were prepared during the digestion procedures. All reagents were of analytical grade (Merck, Darmstadt, Germany) and all glassware, digestion flasks and polyethylene bottles used for digestion and storage of samples were pre-washed, soaked in detergent water for two hours, washed properly and rinsed with deionized water and then soaked in 10% (v/v) HNO3 for about 20 hours. Thereafter, they were rinsed with deionized water followed by 0.5% (w/v) KMnO4 solution and finally rinsed with deionized water and then allowed to air dry before use.

2.3 Determination of the metals

Agilent 7900 (Agilent Technology, USA) Inductively Coupled Plasma Mass Spectrophotometer was used to determine the levels of As, Cd, Cr, Pb and Ni in the digested samples by the ICP-MS technique, and Lumex RA-915M Automatic Mercury Analyzer (Lumex Instruments, Canada) was employed for the determination of Hg in the digests by Atomic Absorption Spectroscopy technique. Prior to that, calibration standard with varying concentrations were prepared from the stock solutions of the analytes and the instruments were used to establish calibration curves, from which the concentration of the analytes in the digests were determined.

Recovery analysis was performed to confirm the accuracy of the analytical methods employed in this study. This was done by spiking one sample with known amount of the standard solutions of the metals. The spiked samples were then treated and analyzed under the same conditions as the other samples to determine the percent recoveries.

Dietary Exposure of the population to the metals was assessed by computing estimates of daily metal intake through the consumption of the rice samples. Dietary exposure in the form of Estimated Daily Intake (EDI), was computed by using equation 1.

“DCR” is the rice Daily Consumption Rate of the population of Monrovia.

“Bw” is the average Body Weight of adult.

Health risk effects posed to the population of Monrovia from the consumption of contaminated rice with heavy metals was conducted according to the US EPA integrated metal risk assessment guideline [12]. The non-carcinogenic health risk was assessed by using Hazard Quotients (HQ) and Hazard Indices (HI). Carcinogenic health risk was assessed by using Incremental Lifetime Cancer Risk (ILCR) value of the carcinogenic metal. HQ, HI and ILCR were calculated using Equation 2, 3 and 4 respectively.

Table 2: Reference Doses and Slope Cancer Factors of the metals.

Table 3: Constant Parameters considered in the determination of health risk.

The study analyzed the levels of As, Cd, Cr, Hg, Pb and Ni in a total of sixry (60) rice samples consumed in Monrovia. Ten replicates of two randomly selected samples each were treated and analyzed under similar conditions to assess the degree of precision or repeatability of the results obtained. The Relative Standard Deviations from the data sets ranged from 8.887% to 12.121%. The accuracy of the analytical methods was assessed by spiking one sample with known amount of the standard solutions of the metals. The percent recoveries ranged from 87% to 105% (Table 4). The levels of metals in the tested rice samples are presented in Figure 1. Though the selected metals were all present in the selected rice samples, they were all below the respective standards set by the Codex Alimentary Commission, the European Commission and the People’s Republic of China [17-19]. This indicate low contamination of the products by heavy metals. Overall, Red Star, Uncle Sam, Kissi Rice, Belleluna 1, Kpelleh Rice and Lady Norah recorded the highest concentration of As (0.0181 mg/kg), Cd (0.1179 mg/kg), Cr (0.4245 mg/kg), Pb (0.0371 mg/kg), Hg (0.0094 mg/kg) and Ni (0.6552 mg/kg) respectively. Soil pH and redox potential are the major factors that account for the presence of heavy metals in rice grains. However, the application of silicon fertilizer, which is usually practiced in rice production, enhanced their toxicities in the plant. The concentration levels of the selected metals recorded in this study were similar to or lower than the ones recorded in studies conducted in China, India, Bangladesh, Pakistan, Brazil, Spain and the USA [20-25].

Dietary exposure of the consumers to the metals were very low, as indicated from the Estimated Daily intake values obtained. Estimated Daily Intake values of the metals were all significantly below their respective Provisional Tolerable Daily Intake values recommended by the Joint FAO/WHO Expert Committee on Food Additives (Figure 2). This showed that at the current rice consumption rate, the amount of the metals ingested is insignificant. In order to exceed the recommended daily threshold limit, an average person must consume higher amount of the products per day. For example, the highest concentration of As (0.0181 mg/kg) in the tested samples was found in Red Star. If an inhabitant of Monrovia consumed 248 g of Red Star per day, he/she consumed approximately 0.000064 mg of As per day, which is far below the 0.00214 mg limit set by JECFA. To exceed the limit, one will have to consume over 8.27 Kg of Red Star per day. This is highly unlikely.

Hazard quotients recorded for the metals ranged from 0.001 to 0.501 (Figure 3). The values were below the US EPA permissible limit of 1; implying no potential non-carcinogenic health risks from each of the metals to the population. The low level of risk might be due to the low exposure rate of the population to the metals. The cumulative intake of the metals in the form of Hazard indices were also below the US EPA permissible limit; further suggesting no non carcinogenic potential health risk to the population from the combination of the metals (Figure 4). The values obtained for the Incremental Lifetime Cancer Risks for As through the consumption of rice samples analyzed in this study ranged from 6.0 × 10-6 to 8.4 × 10-5. According to the US EPA, any Incremental Lifetime Cancer Risk value equal to or less than 10-4 is labelled safe and pose no considerable expected carcinogenic health risk to a population [26]. The highest Chronic Daily Intake value for As (0.000056 mg/kg/day) in the tested rice samples was found in Red Star. However, as revealed from the obtained Incremental Lifetime Cancer Risk value (8.4 × 10-5), it is significantly low to produce chronic effect from long term consumption of the product at the current level of contamination and consumption rate (Figure 5). 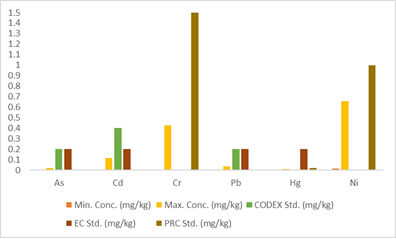 Figure 1: Concentrations (mg/kg) of metals in the tested rice samples. 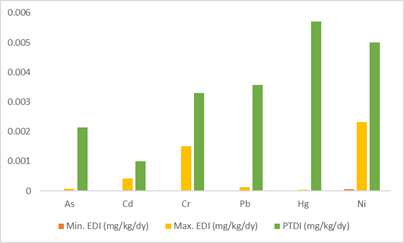 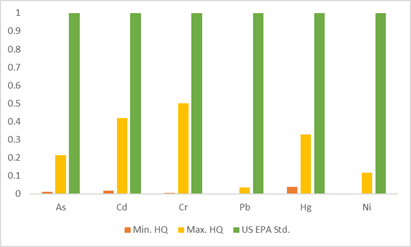 Figure 3: Hazard Quotients of metals in the tested rice samples. 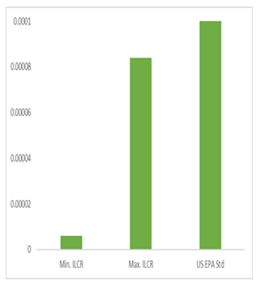 Figure 4: ILCR range of As. 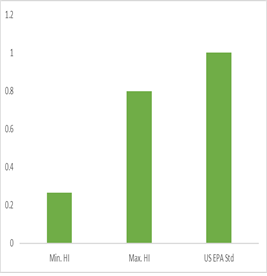 The study assessed the risk associated with the consumption of metal contaminated rice sold on the markets in Monrovia. Though the rice samples recorded traces of tthe selected metals, the level of contamination is low to produce any significant health effect to the population. The observed dietary intake values of each of the metals were less than JECFA permissible safety limits, and the Hazard Quotients and Hazard Indices were also less than the US EPA permissible safety limit, confirming that the population is not at any significant health risk to As, Cd, Cr, Pb, Hg and Ni exposure through the consumption of the selected rice brands. However, there is a possibility of health effect to the population if there is a considerable increase in the levels of the metals in the products. The authors, therefore, recommend regular monitoring of heavy metal levels in rice brands and other food products sold on the markets in Monrovia.

The authors declared no conflict of interest with respect to the research, authorship and/or publication of this article.