Emerging A New Strategy for the Antitumor Immunotherapy: Pharmacological Modulation of the Ca2+/Camp Signaling Interaction

Cancer is a major public health problem and the second leading cause of mortality around the world. Antitumor immunotherapy using monoclonal antibodies is considered selective and efficient in the treatment of different types of tumors, but its cost and toxic effects limit its application. Many tumor microenvironments, including lymphoma and carcinoma, are enriched in immune suppressive cells that contribute to immune exhaustion by means expression of inhibitory ligands, suppressive cytokines, and tumor-promoting factors. Antitumor therapies targeted to reduce the induction, recruitment, or suppressive activities of the immune cells have been investigated. New antitumor strategies using drugs targeted to intracellular signaling involved in cell proliferation and survival, angiogenesis, and metastasis have become promising in recent years. Thus, our discovery of the role of functional interaction between intracellular signaling pathways mediated by calcium ions (Ca2+) and cyclic adenosine monophosphate (cAMP) (Ca2+/cAMP signaling interaction) in these cellular responses, opened a great avenue for the development of new antitumor therapeutic strategies. Here, we discuss how the combined use of monoclonal antibodies with drugs that modulate the Ca2+/cAMP signaling interaction to reduce tumor growth could be a potential strategy in the antitumor immunotherapy due to the increment of antitumor efficacy and reduction of adverse effects.

1. Introduction
According to the World Health Organization (WHO) reports, cancer is the second leading global cause of death. These reports showed that the cancer was responsible for 8.8 million deaths in worldwide only in 2015. However, the number of new cancer cases can rise by about 70% over the next 2 decades. Conventional chemotherapy and radiotherapy have showed important limitations, mainly due to its high degree of undesirable side effects, low selectivity, and for affecting both tumor and healthy cells [1,2]. Thus, new antitumor strategies such as targeted therapies [3] and immunotherapy [4] have been proposed as monotherapy, or in combination with conventional therapies [5].

Antitumor immunotherapy using monoclonal antibodies, such as antibodies against vascular endothelial growth factor (VEGF), has been considered as satisfactory targeted and selective antitumor therapy [6]. Although this strategy has showed significant antitumor efficacy in the different tumor types, the toxic effects and high cost limits its current clinical use [7]. Thus, the efficacy, tolerability and cost of the antitumor immunotherapy to control the tumor growth, angiogenesis and dissemination constitute the major barriers for the development of effective antitumor therapy [8].

In the early stages, the mass tumor development is facilitated by diffusion of nutrients through from neighboring tissues. Thus, tumor growth depends on the process of angiogenesis, and the new formed blood vessels serve as routes for dissemination of the tumor cells to other places [9]. For tumor-induced angiogenesis occurring, ?v?3 integrins play an important role in the physical interaction with the extracellular matrix necessary for cell adhesion, migration and positioning, in addition to inducing signs for cell proliferation and survival [10]. The information transmitted by integrins from the extracellular medium to cytoskeleton proteins is mediated by several intracellular signaling, including the increase of GTPases activity, stimulation of mitogen-activated protein kinase (MAPK), alteration of cytosolic Ca2+ concentration ([Ca2+]c), and increase of substrates activated by phospholipase C (PLC) [11][12].

Activation of PLC stimulates the hydrolysis of membrane phospholipids, generating inositol-1-4-5-triphosphate (IP3), and diacylglycerol (DAG) [12]. DAG facilitates the Ca2+ influx through plasma membrane voltage-activated Ca2+ channels (Cav), increasing the [Ca2+]c [12,13]. The activation of Ca2+ channels located in endoplasmic reticulum (ER) membrane by IP3 (via IP3 receptors) or Ca2+ (via ryanodine receptors) stimulate the Ca2+ release from ER to the cytosol, increasing the [Ca2+]c in specific intracellular sites [12]. Several mechanisms involved in intracellular Ca2+ homeostasis finely regulate the [Ca2+]c [12]. The Ca2+ ATPases located in ER membrane (SERCA) and plasma membrane (PMCA) transport the Ca2+ from cytosol to ER and extracellular medium, respectively, reducing the [Ca2+]c [12,13]. Several evidences suggest that the abnormal gene expression and activity of the different proteins involved in the intracellular Ca2+ homeostasis, such as Cav1.2, Cav3.2, SERCA2 and SERCA3, importantly contribute to tumor growth and dissemination due to cytosolic Ca2+ overload in tumor cells [14-18]. Thus, these proteins constitute potential molecular targets for antitumor therapy.

In addition to intracellular Ca2+ signaling, other signaling and messengers could contribute to tumor growth and dissemination such as intracellular signaling mediated by cyclic adenosine monophosphate (cAMP). Generated from the action of adenylyl cyclases (AC) on the adenosine triphosphate (ATP), the cAMP is an important intracellular messenger involved in the regulation of several cellular responses, including angiogenesis and tumor growth [19-21]. The increase of AC activity increments the cytoslic cAMP concentration ([cAMP]c) that active protein kinases, such as cAMP-dependent protein kinase (PKA), resulting several cellular responses [19-21]. The diminution of AC activity reduces the [cAMP]c and intracellular cAMP signaling that regulates the transcriptional factors, and gene activation, stimulating DNA synthesis and cell cycle [19-21]. Some evidences suggest that the increase of [cAMP]c inhibits the angiogenesis and tumor growth [21-24]. Thus, messenger involved in the intracellular cAMP signaling also constitute potential molecular targets for antitumor therapy. 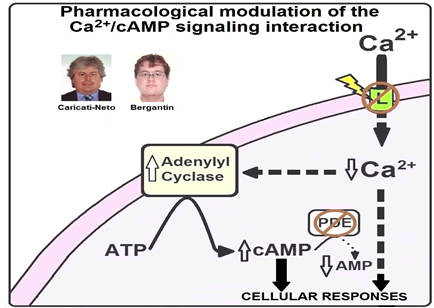 Figure 1: Pharmacological modulation of the Ca2+/cAMP signaling interaction proposed by Caricati-Neto and Bergantin [26-30]. The Ca2+/cAMP signaling interaction can be pharmacologically modulated by combined use of the the Ca2+ channel blockers (CCB) and drugs that promote the increase of [cAMP]c (cAMP-enhancer compounds). In response to the reduction of Ca2+ influx through plasma membrane voltage-activated Ca2+ channels (L) produced by CCB, the AC activity and [cAMP]c are increased. These CCB-effects can be potentiated by cAMP-enhancer compounds, such as phosphodiesterase (PDE) inhibitors.

Several evidences support that the abnormal intracellular signaling mediated by Ca2+ and cAMP could be involved in tumor growth and dissemination [31-37]. As previously mentioned, the abnormal gene expression and activity of the different proteins involved intracellular Ca2+ homeostasis contribute to tumor growth [14-18]. In addition, the increase of [cAMP]c inhibits the angiogenesis and tumor growth [21-24]. Thus, we have proposed that the combined use of monoclonal antibodies with drugs that modulate the Ca2+/cAMP signaling interaction to reduce tumor growth could be potential strategy in the antitumor immunotherapy due to increment of antitumor efficacy and reduction of adverse effects [31-37]. Figure 1 shows how the Ca2+/cAMP signaling interaction could be pharmacologically modulated by the combined use of the Ca2+ channel blockers (CCB) and drugs that promote the increase of [cAMP]c (cAMP-enhancer compounds).

2. Pharmacological modulation of the Ca2+/cAMP signaling interaction as a new therapeutic strategy in tumor immunotherapy
In tumor cells, the intracellular Ca2+ signaling pathways are remodeled, or deregulated, changing their physiology, and distinguish them from non-malignant cells [38,39]. This remodeling, or deregulation, provides means by which cancer cells can overcome systemic anticancer defense mechanisms [38,39]. In addition, this remodeling or deregulation can lead to genetic diversity found in cancer tissues thereby providing effective cellular strategies to the selection pressure to acquire specific traits [38,39].

Several evidences suggest that the cytosolic Ca2+ overload due to abnormal gene expression and activity of the different types of Ca2+ channels importantly contribute to tumor growth and dissemination due to cytosolic Ca2+ overload in tumor cells [14-18]. Evidences suggest that Ca2+ channels TRP and Orai participate in the intracellular Ca2+ signaling involved the physiological angiogenesis processes [17]. Thus, the Ca2+ channels have become important molecular targets in tumor cells and the drugs that interfere with the Ca2+ channels could be useful in the treatment of different types of tumor [18,31-37,40,41].

L-type Ca2+ channels has been implicated in the development and progression of several tumors, and a recent meta-analysis of microarray datasets showed that mRNA gene profile of the L-type Ca2+ channels in different types of cancer [42-47]. For example, it was showed that the L-type Ca2+ channels are significantly up-regulated in colon and esophageal cancer [43-47]. Thus, pharmacological blockade of these channels could be used as a therapeutic strategy for antitumor therapy. In fact, some studies showed that the L-type CCB, such as amlodipine, mibefradil and NNC-55-0396, inhibit the proliferative response in different tumor cells [18,40,41]. It was suggested that these L-type CCB can directly modify the transcription of genes and their products, e.g., the proteolytically cleaved 75 kDa C-terminal fragment of Cav1.2, a Ca2+ channel associated transcriptional regulator (CCAT), which translocates to the nucleus altering the transcription of several genes, including Myc, Bcl-associated death promoter (Bad) and artemin [42]. Nuclear CCAT levels increase or decrease in response to low and high intracellular Ca2+, respectively [42]. It was suggested that L-type CCB NNC 55-0396 inhibits tumor angiogenesis by suppression of hypoxia-inducible factor-1alpha signal transduction via both proteasome degradation, and protein synthesis pathways [18]. The L-type CCB Amlodipine inhibited both in vitro and in vivo the growth of human epidermoid carcinoma A431 cells, via arresting cell cycle at G1 phase, and reducing phosphorylation of retinoblastoma protein, expression levels of cyclin D1 and cyclin dependent kinase [40].

Proangiogenic events mediated by Ca2+ have been investigated in tumor-derived endothelial cells [17]. Abnormal expression and function of Transient Receptor Potential (TRP) channels is involved in the alterations of intracellular Ca2+ signaling in endothelial cells from human breast and kidney tumors and [17]. TRP channels subfamily includes a number of putative proangiogenic channels [17]. It was suggested that pharmacological blockade of these Ca2+ channels could significantly reduce the vascularization in these tumors [17]. Thus, antitumor immunotherapy using monoclonal antibodies against VEGF, has been considered as satisfactory targeted and selective antitumor therapy [6]. These findings support that the pharmacological modulation of the different types of Ca2+ channels in the tumor cells combined with monoclonal antibodies against VEGF could be a novel alternative for antitumor immunotherapy.

Several evidences suggest that the drugs that modulate the intracellular cAMP signaling could be used to inhibit the angiogenesis and tumor growth. It also was showed that the increase of [cAMP]c produced by phosphodiesterase (PDE) inhibitors suppress the endothelial extracellular matrix remodeling [22]. In addition, it was showed that PDE inhibitors reduce the intracellular signaling mediated by PI3K/AKT to down-modulate VEGF secretion and vessel formation in vitro, and stimuling the lower synthesis of VEGF and diminishing the microvessel density in animal model of diffuse large B-cell lymphoma [23]. Some studies showed that the association of PDE2 and PDE4 inhibitors with curcumin significantly reduced the VEGF production, angiogenesis and tumor growth [24].

Interestingly, the 8-Cl-cAMP and PKA type I-selective cAMP analogs (8-PIP-cAMP and 8-HA-cAMP) also showed a potent antiproliferative effect in medullary thyroid cancer cell lines [52]. It was showed that the 8-Cl-cAMP significantly inhibited the transition of cell population from G2/M to G0/G1 phase and from G0/G1 to S phase [51]. In addition, the 8-Cl-cAMP induced apoptosis in medullary thyroid cancer cell lines [52]. This finding demonstrated that cAMP analogs, particularly 8-Cl-cAMP, significantly suppress cell proliferation in medullary thyroid cancer cell lines and provide rationale for a potential clinical use of drugs that interfere with intracellular signalling mediated by cAMP/PKA in the antitumor therapy. Although the role of intracellular cAMP signaling in tumor cells has been poorly investigated, the drugs that interfere in the intracellular cAMP concentration have been proposed as potential adjuvant, chemotherapeutic or chemopreventive agents in different types of cancer, including hepatocellular carcinoma [53].

Due to involvement of Ca2+ and cAMP in the regulation of the several cellular responses, including angiogenesis and tumor growth, the proteins involved in the Ca2+/cAMP signaling interaction have been considered potential pharmacological targets in the antitumor therapy, in combination with conventional chemotherapy, radiotherapy and immunotherapy. It is important to mention that the cancer therapy with drugs that modulate the Ca2+/cAMP signaling interaction could be useful to control growth of cancer with high rates of resistance to conventional immunotherapy, to decrease dose of monoclonal antibodies intravenously infused, and their adverse effects. Thus, the pharmacological modulation of the Ca2+/cAMP signaling interaction in tumor cells could open a great avenue for the development of new antitumor therapeutic strategies to reduce tumor growth by combined use of the CCB, drugs that interfere with cAMP signaling and anti-VEGF monoclonal antibodies. This new strategy could promote important advances in the antitumor immunotherapy, increasing its efficacy and reducing side effects.