Heavy Metal Pollution in Soil Samples Obtained from some Communities around a Cement Factory in Obajana, Kogi State, Nigeria

Lokoja, Osara and Kabba are the three major communities (though there are other minor communities such as Kakun, Chokochoko, Obele, Usungwe and Otokiti) within the 40 km radius to Obajana the homeland of the Dangote Cement Industry situated in Kogi State of Nigeria. The cement industries forms part of the industries that are well known to contribute to environmental pollution. Exposure to cement dust for a short period may not cause serious problem, however prolonged exposure can cause serious irreversible damage to plants and animals [1]. The problem of air pollution in the form of particulates has become a threat to the survival of plants and the reduction of the integrity of soils in the industrial areas [2, 3]. Other reported effects of cement dust on plants include reduced growth, reduced chlorophyll, clogged stomata in leaves, cell metabolism disruption, interrupt absorption of light and diffusion of gases, lowering starch formation, reducing fruit setting [4]. In animals it leads to various respiratory and blood-related diseases, like cancers, eye problems and genetic mutation [5]. Metal pollution of the soil including agricultural soils arising from industrial activities, vehicular emissions, and waste disposal sites are well documented [6]. The environmental concern in cement manufacture is primarily related to the emission of cement dust and gases [3] besides gaseous and particulate pollutants there are also enhanced levels of toxic heavy metals in the environment of a cement factory such as lead, nickel, zinc, Cadmium, copper posing very potential hazard for all living organisms [7]. Typical raw cement is made up of the following trace metals aside from the main and core raw materials 25 mg/kg of Cr, 21 mg/kg of Cu, 20 mg/kg of Pb, and 53 mg/kg of Zn. Further to this elemental composition, it was also reported that about 0.07 kg of dust is generated into the atmosphere when 1 kg of cement is manufactured [8]. It has been established that dust containing elevated amounts of trace metals emanating from the vicinity of cement factories may adversely affect humans, plants, and soil composition within the vicinity [9]. Dangote Cement was founded on November 4, 1992, Obajana Cement Plc (OCP) was incorporated by the Kogi State government in 1992. It was however acquired by Dangote Industries Limited in 2002 and commenced the construction of the first cement production plant in 2004 (VCML, 2010), therefore it is believed that a large quantity of dust, commonly known as cement kiln dust has been produced during the production of cement in the last 28 years making it necessary to evaluate the effect of cement dust on the environment. This study was aimed to determine the soil physicochemical characteristics, the presence and concentration of some heavy metals (Cd, Cu, Ni, Pb and Zn) as the toxicity of these elements have been reported extensively [10], and present a mathematical models of pollution Indices caused by the cement dust on soils from three communities (Lokoja, Osara and Kabba) within the Dangote Cement factory, situated in Obajana, Kogi State of Nigeria and a control site. 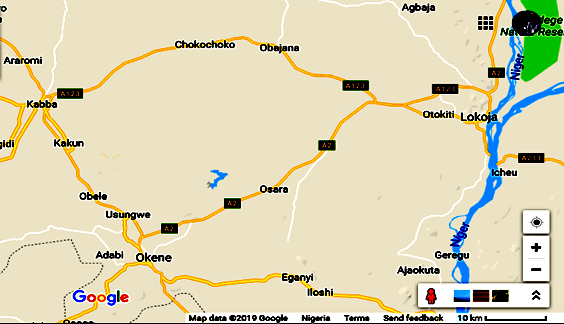 Figure 1: Google-map showing the four communities relative to each other.

A total of 48 soil samples (24 each in February 2016 for the dry season and same repeated in June 2017 wet season) were collected in all, taking record of the geographical coordinates with GPS [13] of each sampling point (Tables 1 to 3 and Figures 1 to 3). The soil samples were collected from topsoil at the depths of 0–10 cm (ASTM Guide D6044) at about 1 km apart. Each of the samples were appropriately labeled and transported in polyethylene bags to the laboratory where the soil were homogenized by coning and quartering, air-dried at 100-110°C for about 24 h and then finely powdered and sieved to 2 mm. 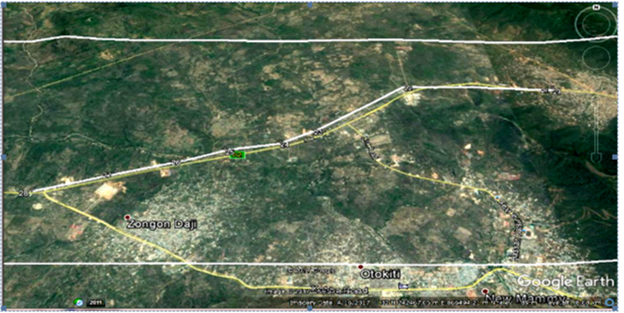 The following analysis were carried out on the soil samples, after being air-dried, gently crushed and sieved through a 2 mm sieve; soil pH and EC values were determined in the soil by the soil-water mixture using a pH - meter according to [14]. Soil organic matter was determined using the Walkey-Black wet oxidation method [15] the method described by [16] was adopted in the determination of carbonates in the soil samples, and the Particle size analysis was determined according to the method of [17]. Also, the heavy metal concentrations of (Pb, Cd, Ni, Zn, and Cu) in the soil samples were determined by first being digested with HNO3-HCl-H2SO4 (5:1:1), then the heavy metals in the soil digests, were determined using the flame Atomic Absorption Spectrophotometer, manufactured by Thermo-Scientific Spectrometer model ICE-3000 V1.30, situated in Sheda Science and Technology Complex, Abuja.

An index of geo-accumulation (Igeo) was originally defined by [21], in order to determine and define metal contamination in sediments/soil [22] by the following equation

4.1 Physicochemical characteristics of the soils of the studied areas

The results of the pH, Electro-conductivity, Carbonates, Organic matter, and the Particle size of the soils are summarized in (Tables 1-3) of the studied areas.

Table 3: Mean results for the physicochemical parameter of all the studied area.

The mean distribution of the soil properties obtained during the dry and rainy seasons are summarized in Table 1 and Table 2. Soil pH is an important parameter that directly influences sorption/desorption, precipitation/dissolution, complex formation and oxidation reduction reactions [25]. The highest mean pH value (7.3±0.5) was observed at Lokoja site during the dry season.

Average pH values of the soil sample at Osara, Kabba and Lokoja were 6.6±0.6, 6.3±0.5, and 6.9±0.5 which were higher than the control soil. The modification of the soils in some sites from acidic to neutral during the dry season (as seen in Lokoja site) could be attributed to the deposition of liming materials (CaO and Ca(OH)2) which are often used for cement production [25]. The average organic matter in the three locations under review are 3.94±0.28 from Lokoja soil, 3.34±1.4 from Osara, and 2.8±0.34 from Kabba soil which are higher than the 2.14±0.9 of the control soil. The soil organic matter content for the three sites was in the order of Lokoja > Kabba>Osara during the Dry season, The relatively higher organic matter content in Lokoja could be attributed to higher cement dust, thus microbial decompositions of organic matter are often retarded [26]. The low concentrations of organic matter at the control site indicated that it could support optimum plant growth than those from the three locations under review that are closer to the factory.

EC: Soil salinity refers to the concentration of soluble inorganic salts in the soil. It reflects the extent to which the soil is suitable for growing crops. Values of 0 to 200 μS/cm are safe for all crops; yields of very sensitive crops are affected between 200 to 400 μS/cm; many crops are affected between 400 and 800 μS/cm; while only tolerant crops grow reasonably well above that level [27]. In the Table 5 the results for the EC of this study shows 186.1±89.8> 160.3±112.7 > 146.3±53.6 > 132.19±85.8 μS/cm for Lokoja, Osara, Kabba and the control respectively. This result shows a higher salinity with the Lokoja soil than Osara and Kabba soil. However the results are below the safe limits (0 to 200 μS/cm) for crops.

4.2 Heavy metal characteristics of the soils of the studied areas

Summary of the dry season, raining season, mean of the two seasons and the standard deviation of the concentrations of Pb, Zn, Cu, Cd and Ni in Osara, Kabba and Lokoja soil samples are shown in

Table 4: Heavy metal concentrations of the heavy metals of the soil samples in mg/kg. DRY SEASON.

Table 5: Heavy metal concentrations of the heavy metals of the soil samples in mg/kg. RAINING SEASON.

Table 6: Average heavy metal concentrations of the heavy metals of the soil samples in mg/kg.

Also the Pollution Load Index (PLI) was used to determine the level of pollution in these locations. The PLI is aimed at providing a measure of the degree of overall contamination at the sampling sites. The Pollution Load Index (PLI) proposed by [29] indicates PLI< 2, PLI =1, and PLI > 1 indicates a Perfection, Baseline levels of pollutants and Deterioration categories respectively. The PLI calculated from the CF (Contamination Factor) values (Table 7) indicates that the Lokoja (PLI= 6.40) soil was more polluted than the soil from Osara (PLI = 3.23) and Kabba (PLI = 2.04) which was least contaminated in the studying area.

The pollution levels in the studied area under consideration was further expressed in terms of geo-accumulation index. An index of geo-accumulation (Igeo) was originally defined by [20], in order to determine and define metal contamination in sediments [24] by comparing current concentrations with pre-industrial levels (Control soil). The values of this index (≤0 to >5) include seven classes (0-6) vary from unpolluted to extremely polluted. The highest class (6) reflects a 100-fold enrichment and (0) reflects the background concentration [30]. The I-geo results in this study (Table 7) indicated that the Cu and Ni were moderately to strongly polluted metals in Lokoja with I-geo 4.15 and 3.84 respectively, while Cu I-geo= 1.85), and Ni (I-geo=1.59) in Kabba and Cd (I-geo=1.93), Ni (I-geo=1.18) and Pb (Igeo=1.67) were moderately polluted. However Zn was, according to the I-geo values, unpolluted both in Kabba and Osara but moderately polluted in Lokoja.

Table 7: Table for the EF, CF, PLI and Igeo of the Study area.

In this study, 48 soil samples (24 each during the dry and raining season) have been analyzed for their physic-chemical and heavy metal (Cd, Cu, Ni, Pb and Zn) parameters,. Sampling points were chosen in such a manner as to cover the three communities (Lokoja, Osara and Kabba) within the 40 Km of the vicinity of the Dangote Cement Factory at Obajana, in Kogi State of Nigeria. The physicochemical parameters of the soil varied from one location to the other, these values were relatively higher compared to the average values recorded for the control site, the results also indicated that levels of most metals are above the control soil. To understand the complexity of the distribution of the pollutants, three mathematical models, enrichment factor, geo-accumulation index and pollution load index were employed to explain the distribution dynamics in terms of enrichment, contamination and overall contamination status of the communities. The mathematical models revealed that majority of the soils from these locations were enriched or contaminated with the heavy metals under review and that the source of pollution was anthropogenic. The cement facility together with the attendant vehicular traffic and emissions were implicated as responsible for metal pollution in these areas, as in general the highest metal level were found in Lokoja and Osara as they are closer and much plough by cement conveying vehicles to other parts of the country.

Until the current investigation, data on the heavy metal levels from these three communities under the potential influence of the emissions of these pollutants by the cement facility were scarce. From the results of the current investigation, we recommend that future cement production facilities must embark on proper dust control and prevent cement dust from vehicles conveying cement to other parts of the country and that our environmental regulations must be strengthened so as to prompt current industrial operators to take precautions and new techniques to protect the environment from hazardous pollutants, the reason being that the human body is of a complex structure, therefore, the accumulation of metals can cause many toxic effects, adverse health consequences and which can influence different mechanisms in the body [31, 32] .

My first and uttermost gratitude goes to God Almighty through our Lord Jesus Christ. I am grateful to Professor S. E. Kakulu of University of Abuja, my PhD supervisor. Majority of this work was carried out in the University of Abuja laboratory as a result of this I thank Mr. Richard O. Megwe the head of the Chemistry Lab. My special thanks goes to the National Mathematical Centre, Abuja, the organization where I work as a research fellow and my gratitude also goes to Mrs. Abiodun Soyombo of the Renewable Energy Department, of the Nigerian National Petroleum Corporation (NNPC).