Objectives: To assess changes in malaria morbidity and mortality and to determine risk factors associated with malaria mortality in Tshwane District during 2011-2014.

Conclusion: In this non-endemic district, a number of malaria cases have been reported. Public awareness regarding uptake of antimalarial prophylaxis before and during travel to endemic areas could lead to a reduction in mortality and morbidity in South Africa.

Malaria is a life threatening parasitic disease which is transmitted to humans by the bite of an infected female anopheles mosquito [1]. It is one of the leading causes of morbidity and mortality in endemic countries [2]. There has been a global decline of malaria incidence by 17% and malaria mortality by 26% since 2000 [3]. There was an estimated 214 million cases of malaria and 438 000 deaths in 2015 and a global decrease of 37% in malaria incidence and 60% in malaria deaths between 2000 and 2015 [1]. There are potential risk factors which may have a significant impact on malaria transmission such as the level of mosquito control measures, population immunity, social and economic status (housing conditions), and environmental factors including rainfall and temperatures. Resistance to antimalarial drugs has been attributed to an increase in mortality [4]. In Africa, malaria is mostly caused by Plasmodium falciparum (P. falciparum) as opposed to P. ovale, P. vivax, P. malariae, and P. knowlesi [3, 5]. 90% of malaria infections in South Africa are caused by P. falciparum, which is more virulent [6, 7]. Previous studies have shown that people who are at high risk of dying from malaria are pregnant women whose immunity is decreased by pregnancy, children <5 years of age with immature immune systems, immunocompromised people and travellers from non-endemic areas into malaria endemic areas [8]. Malaria is under surveillance and is a notifiable condition in South Africa [9]. The number of reported malaria cases and deaths is used to guide public health interventions to inform policy decision making and to track progress of malaria control programmes. There are three malaria endemic provinces: Limpopo, KwaZulu-Natal and Mpumalanga [9].

Ethical approval was obtained from University of Pretoria Ethics Committee. Permission to use the surveillance data was obtained from Tshwane research committee and Communicable Diseases Control (CDC) programme manager. A retrospective cohort study was conducted using malaria surveillance data collected by the Communicable Disease Control Directorate in Tshwane district during 2011-2014. The surveillance data was received from both private and public health facilities. The reporting sites included eight public hospitals, 35 private hospitals, 22 municipal clinics and 49 public clinics. Only laboratory confirmed malaria cases were enrolled in the study. For each malaria death in Tshwane district, an audit is conducted using a special tool to assess risk factors associated with malaria mortality, therefore, secondary death audits were reviewed. The secondary death audit data were used to describe the risk factors associated with malaria mortality in Tshwane district.

The study was conducted in Tshwane district, which is one of five districts in Gauteng province. Tshwane is the second largest municipality in Gauteng with a population of approximately 2.9 million [12]. The study included individuals who resided in urban and rural settlements within the seven sub-districts of Tshwane, both males and females and all age groups who consulted in health facilities and were laboratory confirmed malaria cases.

Data was cleaned and validated including identification of duplicates using Microsoft Excel 2013. Information collected during research was kept confidential. The names of participants involved in the study were not mentioned during report writing. Data was stored on a password protected computer.

Time series plots were constructed to analyze changes in malaria cases over the period of four years (2011-2014). Univariate and multivariate logistic regression analysis was used to determine risk factors for malaria mortality. The potential risk factors including age, gender, travel history and malaria season were considered. Risk factors with p-values less than 0.2 in the univariate logistic regression models were introduced into the multivariate model. Statistically non-significant risk factors were removed using the manual forward stepwise procedure, starting with those that were highly significant. In all statistical tests, a p value less than 0.05 was considered to be statistically significant. Data was analysed using STATA version 13 and Microsoft Excel 2013.

Between 2011 and 2014, a total of 964 cases were diagnosed with malaria and were notified by public and private hospitals to the Tshwane district Communicable Disease Control (CDC) Directorate. Of these, 19 cases, including one death were Odyssean malaria cases. The median age was 28 years (range: 4 months to 79 years). The age group 25-34 years was more affected compared to other age groups. Males were more affected than females in all the years of study (2011-2014) (Table 1). Almost all cases (99.8%) were caused by P. falciparum. The majority of cases, 96.6% (n=931) had travelled to malaria endemic areas within South Africa and neighbouring countries predominantly Mozambique (52.6%) (Figure 1). Of all cases, 19 did not have travel history. None of the cases had taken chemoprophylaxis before they travelled as indicated on the notification forms received by the CDC directorate. 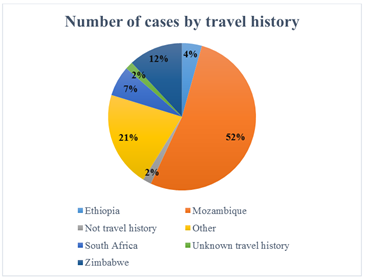 *Other refers to countries with fewer cases 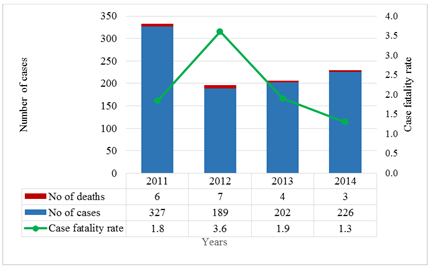 Figure 2: Changes in the occurrence of malaria cases and deaths reported in Tshwane District by year (2011-2014). 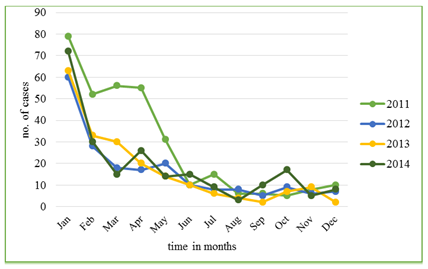 Figure 3: Trends in malaria cases reported in the Tshwane District month by month (2011-2014).

The surveillance data indicates that malaria incidence has been decreasing from 2011 to 2014 with a decrease in the total number of deaths. Age was found to be a risk factor for mortality. Mortality was higher in older people (45-65 years). Most deaths were not in the <5 age group. This is in contrast with other studies where majority of deaths occur in children under five years of age [13]. The incidence of malaria was high in the age group 24-34 as compared to other age groups. This supports findings of other studies [11]. This is an economically productive age group. They are more likely to migrate to Tshwane district in Gauteng province for employment opportunities. Majority of cases occurred in rainy season with a highest peak in January. This may be due to people who are travelling during December holidays to locations that are malaria endemic resulting in an increased number of cases when they return from those areas. There was an increased number of cases in 2014 between August and November which may be due to high temperatures as a result of global warming. Previous studies have shown that there has been a steady decline in the number of cases in South Africa which resulted in decreased morbidity and mortality [9, 14]. Males were more affected than females. This is similar to previous studies conducted in Mpumalanga and Limpopo provinces, South Africa and United Kingdom [8, 15, 16]. All the patients did not take chemoprophylaxis as indicated on the notification forms. However, the reasons for low prophylaxis uptake were not investigated in this study. The findings of a study conducted in the United Kingdom found that low prophylaxis uptake was associated with cost and fear of side effects [17]. Research shows that pregnancy and co-morbidities may lead to severe malaria and are significant causes of malaria mortality [18-20]. However, in this study, statistical significance could not be established due to insufficient risk factor data among those who did not die. These results are similar to the results of the study conducted in Tamale hospital, Northern Ghana [21].

Travel history to a malaria endemic area was found to be protective. The study indicated that those who did not travel to malaria endemic provinces were more at risk of dying as compared to those who travelled. The reason for this might be that malaria is unlikely to be suspected in those without a travel history and diagnosis might be missed. The study showed that the odds of dying from malaria increases with age. This is similar to the results of the study conducted in United Kingdom in 2012 [22]. This study had some limitations. Our study focused on cases which were reported to the Communicable Disease Control office in Tshwane District. Those who were not reported would have caused underrepresentation of the total number of cases in Tshwane District. The results are not generalizable because the surveillance system looked at was only that from Tshwane. A risk factor audit was done only for the patients who died, hence there was insufficient risk factor data for those patients who did not die. The outcome of this study was malaria mortality and the sample size of the deceased was small hence the statistical significance of other variables could not be established. The other limitation of this study is that we were not able to analyse some potential risk factors such as occupation, pregnancy, chemoprophylaxis during travel, time interval between illness and presentation at the health facility, comorbidity, length of stay in hospital, doctors training about malaria, availability of malaria guidelines due to insufficient risk factor information for those patients who did not die.


In Tshwane district, malaria cases were reported throughout the year during the study period with seasonal peaks. Majority of cases were imported. Therefore, public awareness regarding uptake of antimalarial prophylaxis before and during travel to endemic areas could lead to a reduction in mortality and morbidity in South Africa. There is a need to investigate any case of fever for malaria infection to avoid complications and to reduce morbidity and mortality. Malaria surveillance should be strengthened in non-endemic provinces for early detection of malaria cases, including Odyssean cases to reduce morbidity and mortality associated with malaria.

We would like to thank Tshwane District Communicable Disease Control Directorate for providing and allowing access to the surveillance data Thanks to South African Field Epidemiology Program for their continued support. We are grateful to Dorothy L. Southern for her input and guidance on scientific writing and for the critical review of this manuscript.