Toxicity of Radionuclides in Determining Harmful Effects on Humans and Environment

All chemical elements and nuclides consolidated in system of elements on a base of periodic law. Nuclides are similar in texture, have a charge and an atomic weight etc. But some of them inherent property of radioactivity. Such elements and nuclides called radionuclides. Chemical elements and their compounds (substances) can negative impact on living organisms and ecosystems. Science of toxicology studies poisonous substances and their potential dangerous, mechanism of action of toxic substations, methods of diagnosis, prevention and treatment. One aspect of development of this science, in context of dangerous of radionuclides, is radiotoxicology.
In conditions, personnel working at industries with combine chemical and radiation hazards there is a toxic load on humans and environment from chemical and radiation components of chemical elements and compounds.
The examples for such enterprises are:

In this case radionuclides and their compounds have a double toxicity:

The overall impact on the human body will be expressed by the amount of chemical toxicity and radiation toxicity according to the formula: 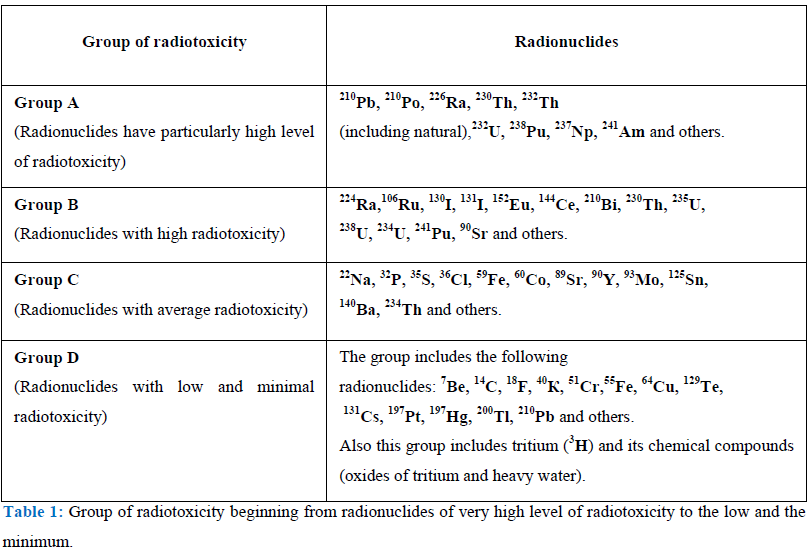 In situations where we have radionuclides of several groups of radiation danger, their activity is equivalent to the Group A of radiotoxicity according with the formula [2]:

and only chemical impact of stable . During extracting a mineral resource and their processing there are waste which placed in the territories of the so-called tailing dumps.

According to research the territory of Ukraine, there are 344 tailing dumps. Total additional volume of waste in tailings of Ukraine ? 1709 million of cubic meters. Plus there are 11 tailings of waste after the processing of uranium ores.

Such objects are identified on all parts of the territory of Ukraine except Crimea region, Zakarpatska region, Volynsck region, Ternopil region, Odesa and Khmelnytsk regions (Figure 1). 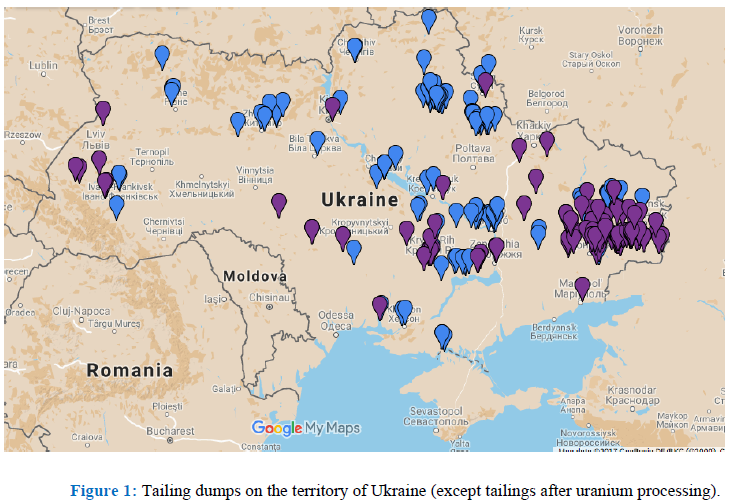 The information received from:

Table 2 shows the brief data of states of Hydrometallurgical plant «Govti Wody» (GMP «Govti Wody», operating company) and State Enterprise «Prydniprovskyi Chemical Plant» (SE «Prydniprovskyi Chemical Plant», inactive company). In the tailes of these enterprises there are preserving chemical elements and there are compounds which are nature occurring radioactive materials (waste after processing of uranium ores).

For the goal of assessment of tails’ potential danger for humans and environment we propose determine the potential danger index (IPNN). The scheme of forming of IPNN is shown in Figure 2 [7]. 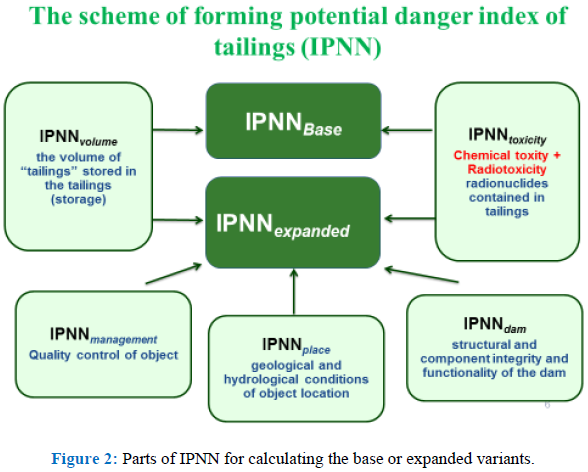 When the extraction of mineral resources and preserving of waste after the processing of ores we get not only chemical influence for humans and environment. Many experts do not consider the radiation impact because they think that these mineral resources don’t have radiation sources. It is false. In this case, we loose the significant part of dangerous factors that affect on people and environment. Thus, the results of assessing the impact of any tailing of industrial enterprises (not only uranium) is doubtful. Taking into accounting the radiotoxicity in IPNNtoxic we can get more reliable information about the state of tailings and there are influence for humans and environment.