Scleractinian corals Phylogenetic studies have been shown that most taxa are not matched with their evolutionary histories. Using gross morphology as principal base, traditional taxonomy cannot solve the lack of well-defined and homologous characters that can describe scleractinian diversity sufficient. Scleractinian Coral species are hard to identify because of their morphological plasticity. DNA barcoding techniques were used to build molecular phylogenetic analysis to some common scleractinian species in Red Sea and Arabian Gulf. The phylogenetic analysis showed that Porites harrisoni, was clustered separate from other Porites sp collected from gene bank. While for Acropora digitefra genetic divergences were recorded between samples collected from the Red Sea and Gulf of Aqaba. Platygyra daeleda sample from Fanous (Red Sea) were distinct from other Platygyra daeleda samples same case were recorded with Pocillopora verrucosa samples. The DNA barcoding technique proves to be very useful in not only differentiating between species but also finding genetic diversity within species.

Morphological identification is confronted with difficulties from phenotypic plasticity, life stage, gender; inability to identify cryptic species, animal parts and lack of taxon knowledge [1]. Resolving many long-standing problems in traditional systematics come from its reliance on skeletal macromorphology, Modern coral taxonomy has begun to integrate examinations of colony, corallite, and subcorallite morphologies with the molecular sequence data that have been collected in the last decade.

Many taxa spread across the scleractinian tree of life have been incorporated into a rigorous classification underpinned by greater phylogenetic understanding [2]. Morphological and physiological diverse within scleractinian corals species [3-5] suggests that their population structure is complex [5]. The complexity of coral population structures has been some illustration by Allozyme electrophoresis [6-8], but it was limited by number of loci and the level of variation at these loci. Using DNA-based techniques recently develop our understanding of the genetic structure of coral populations [9].

DNA barcoding is a taxonomic method to identify the particular taxon of organism that uses a short genetic marker in its DNA [10]. A lot of applications of DNA barcoding in animals had been used a 658-bp region of the mitochondrial (mt) cytochrome c oxidase subunit I (COI) gene widely [10, 11]. However, the rate of evolution in mitochondrial genomes is slow which is usefulness of COI barcoding for identifying coral species specially anthozoans in general [12, 13]. On another hand, across wide range of phylogenetic analyses of scleractinian species showed that COI barcoding technique is consistent with coral taxonomy to level of genus [14, 15], and also to level of species in Stylophora [16]. All of these results make that COI can be a genetic tool for expand taxonomic resolution of corals. On another hand, the advantage of using COI sequence data for coral phylogeny is that, unlike the 16S rDNA, 12S rDNA, and 28S rDNA genes, the sequences are unambiguously alignable because they contain no indels [15].

Aim of study is to investigate molecular characteristic of selected reef building corals collected from the Red Sea and the Arabian Gulf to understand the lineage between scleractinian coral species in such geographic region. 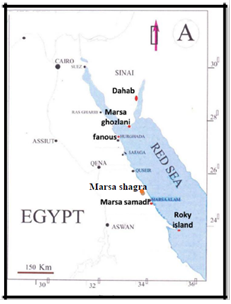 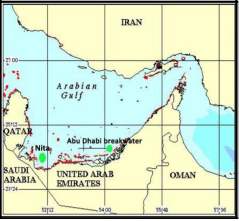 Small fragments of the branched corals were collected randomly by wrapping central branches with pre-labeled sterile plastic bags and cutting nearly 7 cm length by clipper. While massive species were collected by hammer and chisel. To avoid re-sampling coral fragments of the same genus, the distance between replicates were more than 5 m. Specimens were identified using field recognizable features (colony life form, color and corallites form, etc.) according to Veron et al. [17], then later, confirmed by analysis of skeletal traits in the laboratory. Identification of samples was confirmed by M. Pichon (personal communication).

Chromatograms of COXI were edited by using MEGA V6.06 software and aligned with the Clustal W version 1.6 [19]. Sequences were adjusted manually and then were blasted on NCBI GenBank under default algorithm parameters. All COI edited sequences of the current study were deposited at NCBI GenBank with accession numbers from KR401093 to KR401104.

2.3. Data analysis
Reconstruction of phylogenetic trees was based on 1000 bootstrap replication value. All phylogenetic analyses were conducted using MEGA6 [20]. Based on maximum likelihood method, phylogenetic relationship between nucleotide sequences of COX1 on the current study was inferred using Hasegawa-Kishino-Yano substitution model and Gamma distributed among sites (HKY+G) according to the lowest Bayesain Information Criterion (BIC), to construct tree also tree with their relative’s species from GenBank that rooted by Sacrophyton sp.

Based on DNA quality and quantity and PCR successfulness (see Figure 1 for example), only 12 samples represent 5 species of common scleractinian corals were selected for COI barcoding. The tissues of scleractinian corals contain the genomes of intracellular symbiotic dinoflagellates (zooxanthellae). This non-coral DNA can cause significant contamination in any attempt to isolate or amplify coral DNA. Previously, this problem was overcomed either by using zooxanthella-free coral gametes [21-23] or by the repeated centrifugation of adult coral tissues to separate hard coral tissue and zooxanthellae [24]. However, the first method is stated that come coral species only spawn annually and other species brood and release planula larvae that contain zooxanthellae [25] or have gametes that already contain zooxanthellae [26]. While the most zooxanthellae exclude in the second method, this does not guarantee complete absence of the zooxanthellae’s nucleic acid, which cause problem for sensitive techniques such as the polymerase chain reaction (PCR). 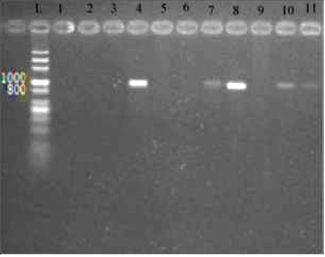 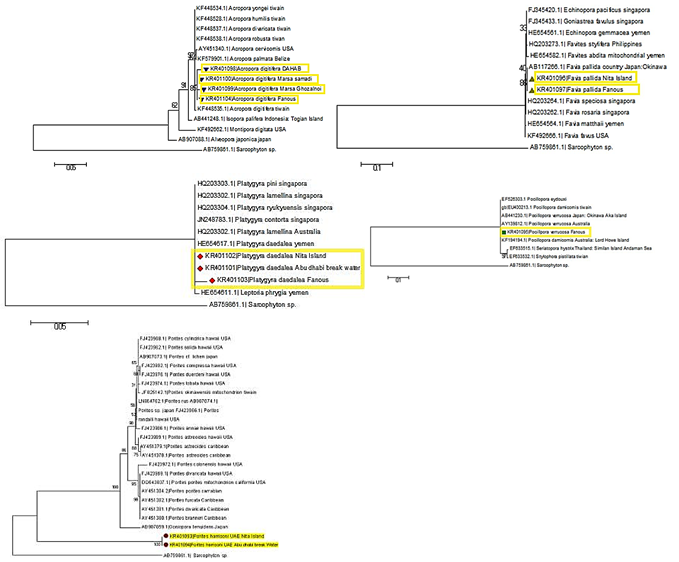 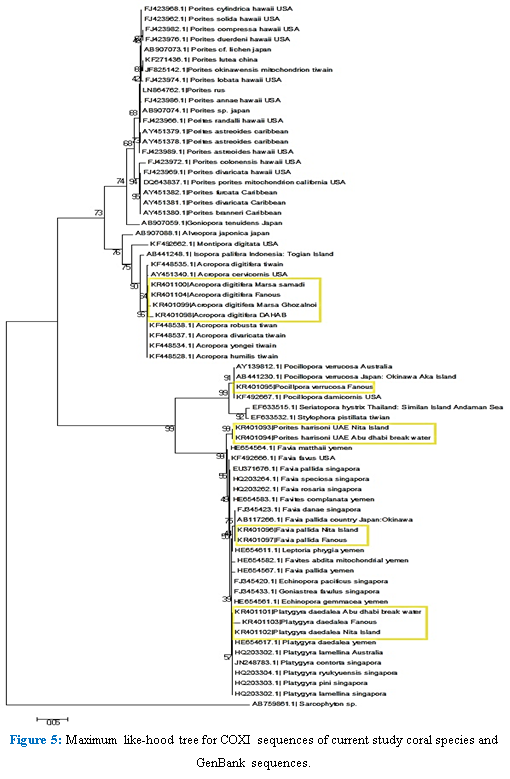 Phylogenetic analysis supports that genus Alveopora is grouped and well supported acroporidae clade with bootstrap (76%). Based on the genetic analyses Alveopora transferred from poritidae to the acroporidae [29, 30]. At genus level, all specimens and that had been collected from gene bank support that Acropora is related to Isopora than Montipora with bootstrap (75%). This is identical to the phylogenetic analysis to family acroporidae in level of genus as Anacropora is more related to Montipora, and Acropora to Isopora that was elevated to genus level recently [15]. Phylogenetic analysis of A. digitifera, P. verrucosa, and F. pallida indicates that there is no distinct sequencedivergence between sits using COI molecular barcoding technique. In spite of being similar in their morphological characters, A. digitifera COI sequences in the current study and that in Taiwan showeddivergence with 85% bootstrappercentage.

For the other coral species, the current study indicated that there is no distinct phylogenetic difference between populations of corals in the Red Sea and that elsewhere. No genetic differentiation found by using the mORF marker to identify distinct mitochondrial lineages for P. verrucosa in Red Sea (Saudi Arabia). According to these results, P. verrucosa in the Red Sea seems to belong to a single panmictic population [31]. Following molecular results of Fukami et al. [18] and Fukami et al. [14], genus Favia is to be include Atlantic taxa from Favia only and other species are assigned to genus Dipastarea.

F. pallida from Fanous reef showed changes in morphology (no calice), so itmay be another morphotype with identical DNA sequences. Phylogenetic analysis of Porites showed that Porites harrisoni specimens clustered in one clade, other porites spp. with bootstrap (100%). Clustered together on another clade with high genetic distance. Benzoni and Stefani [32] found that Porites fontanesii has a distinct species basal to, and well divergent from, one of the two main clades so far identified in Porites using rDNA phylogeny. Phylogenetic analysis of Platygyra showed that all P. deadalea samples clustered with other Platygyra sp. However, only P. deadalea (Fanous) showed genetic distance from other P. deadalea that may suggest the presence of cryptic species. Arabian Gulf specimens were close to P. deadalea (Yemen). Two morphotypes of P. deadalea had been found in Kenya, significant genetic differences between two morphotypes however, phylogenetic analysis of ITS sequences showed no evidence of sequence divergence between morphotypes [33]. P. deadalea displayed 4 distinct morphotypes on the Great Barrier Reef (GBR) [34].

In Egyptian Red Sea and southern Arabian Gulf, this is the first study of phylogenetic analysis to some hard scleractinian coral species. Further research is required on both the Red Sea and the Arabian Gulf in order to understand coral genetic diversity and most importantly corals resistance and resilience to climate change and global warming.