Synergism between manuka honey and penicillin antibiotics against Escherichia coli

Previous studies have suggested synergistic effects between manuka honey and different antibiotics against Staphylococcus aureus. In the present study we have tested in vitro the antibacterial efficacy against Escherichia coli of manuka honey with or without ampicillin and penicillin using the disc diffusion method. Similar synergistic effects of manuka honey with ampicillin and penicillin were observed, particularly in early phases of treatment. Overall, these results support the potential use of natural antimicrobials such as manuka honey either alone or in combination with synthetic agents to lower their therapeutic dose and prevent antibiotic resistance.

Although the therapeutic properties of honey have been known for centuries, its antiseptic and antimicrobial properties have been discovered recently. Consisting mainly of carbohydrates, honey also contains several enzymes, proteins, aminoacids, vitamins, lipids, minerals, and phytochemicals which vary considerably by type of honey and are believed to exert health benefits [1, 2]. The antibacterial activity of honey has been attributed to different factors, including hydrogen peroxide, low pH, high osmolarity, and methylglyoxal (MGO) [3-6]. Among the different types of honey, manuka honey has attracted attention for its antimicrobial effects in numerous bacterial pathogens [7] receiving regulatory approvals for clinical use as a wound care agent in the European Union, the USA, New Zealand and others. Of particular interest is that, despite attempts to induce bacterial resistance to manuka honey in the laboratory, there has been no such report which may be due to the complex composition of honey and the multiple active components [8]. Furthermore, multi-resistant bacterial strains have been shown to remain sensitive to manuka honey suggesting a broad spectrum of action and highlighting its potential clinical usefulness [9]. With increasing concerns over antimicrobial resistance worldwide [10], there has been much focus on the potential use of natural antimicrobials [11, 12]. The objective of this study was to compare the antibiotic activity of manuka honey with commonly used synthetic antibiotics, specifically ampicillin and penicillin, as well as to explore any synergistic effects.

Antimicrobial susceptibility test was done using the disc diffusion method as previously described [13]. In each plate six discs were placed, one each containing ampicillin (10 μg), penicillin (10 units), and manuka honey (1 drop), two containing manuka honey with ampicillin or penicillin, respectively, and an empty disc (negative control). The plates were then incubated immediately at 37°C and the diameters of the inhibition zones were measured every 24 hours.

Data-driven simulation was used to generate 100 observations per treatment group at each timepoint using the SAS procedure PROC SIMNORMAL and the parameters of the input data set. Subsequently, mixed models with repeated measures taking into consideration the correlation of iterations over time were used to compare the antimicrobial activity of ampicillin, penicillin, manuka honey and their combinations. The least square mean estimates were plotted against time. Statistical analyses were performed using SAS version 9.4. 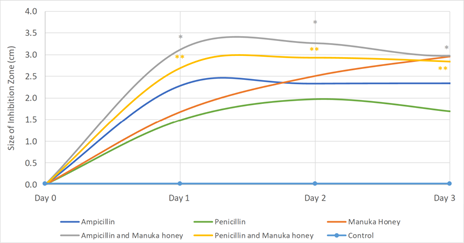