COVID-19 was responsible for an enormous global death toll with large variation among countries, and obesity noted in many studies as a key risk for complications. This study was conducted to estimate the contribution of obesity to COVID deaths prior to vaccine distribution by measuring associations between obesity rates and COVID deaths/million population through 2/25/2021.

Methods: Using Excel, COVID deaths/million for 167 countries grouped by population size, continent or obesity rate were regressed separately on their obesity rate in 2016. Using the least squares formula for the best fit for each model, components of the formula, R2, and the percentage of world population represented, were documented for each group.

Globally, the COVID-19 death toll through February 25. 2021 (before vaccines were widely available) was over 2.5 million worldwide with death rates ranging from 0.4/million population in Viet Nam to 1,892/million in Belgium [1]. The reason for such wide variation is still not well understood but there are some clues. Early in the pandemic, it was noted that people who reported certain underlying health conditions were more likely to be hospitalized and die from COVID-19 [2]. Initial US estimates of those likely to develop complications or die from COVID were based on data from China where the pandemic started and where obesity rates are low. Data from the US found that adults with obesity, hypertension, chronic lung disease, diabetes, and cardiovascular disease were disproportionately hospitalized with COVID-19 [3]. Based on those results, estimates of US adults with underlying conditions increasing risk of complications from COVID were made finding that an estimated 56% of US adults had one or more of the conditions listed above [4]. Including obesity along with chronic diseases as a condition related to COVID deaths appears to blur the usual distinction between chronic and infectious diseases and suggested potential studies. Figure 1 [5] indicates the relationship between most of the separate underlying conditions and risk factors for obesity which include diet and physical inactivity. The objective for this study was to analyze the association of obesity with death rates to estimate the contribution of obesity to the variation in COVID death rates among countries. 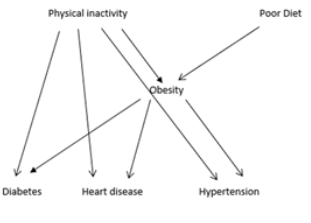 COVID death rates through February 25, 2021 (prior to the wide distribution of vaccines) [1] and obesity rates in 2016 [6] for 167 countries for which data were available for both obesity and deaths were included in the study. Countries were grouped by population size into multiples of 10 countries in each of 8 groups, which included 90.9% of the world population. Results were compared with 57 countries with obesity rates <15% which were also included in the relevant population groups.  Using Excel, equations for linear least squares trend lines and estimates of the coefficient of determination (R2) were made from regression of COVID deaths/million population on obesity rates for each group. A subset of the 100 most populous countries were similarly analyzed by continent with 26 in Asia, 33 in Africa, and 41 in the rest of the world. 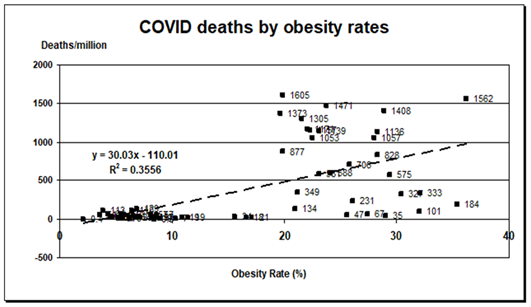 Figure 2: Graph of COVID-19 deaths through 2/25/2021 by 2016 obesity rates for the 60 most populous countries with data for both. Formula and R2 for least squares fit line from regression in Excel.

Table 1: Summary of results for association between obesity and COVID death rates/million, adding countries to each group in order of highest population or top 100 sorted by continent.

Results do not fully answer the question of how much of the difference in death rates is due to obesity, but they should make quite clear that obesity matters. Except for regression analysis limited to countries with low or high obesity rates, most results indicate that obesity explains one-third or more of the difference in death rates between countries, with R2 ranging as high as 0.91 for the group including 58% of the world population. Data from separate continents adds more information. In Africa and Asia which include all countries with obesity <15%, results suggest that 39-40% of the difference in COVID death rates can be explained by obesity rates but the slopes are lower than when all countries are included. This suggests that in Africa and Asia, death rates associated with a particular obesity rate are lower than they are when all countries are included in the model. The similarity in results for these 2 continents may reflect similarities in diet, culture, lifestyle, economy, or other factors and the difference between results for these 2 continents and those including all continents may reflect differences in these same measures.

Regression results for the 57 countries with obesity rates <15%, and the 41 countries outside Asia and Africa with obesity rate all above 19.5% had R2 of 0.003 and 0.0004 respectively, indicating little or no association between country death rates and obesity. Slopes of the fitted lines of 1.0 and 3.0 respectively indicate that increasing obesity rates between the range of values of 0 to 15% for the <15% equation and 19.5%-36.2% for the equation for the 41 countries outside Asia and Africa will have little effect on death rates. In the latter case the equation indicates that all death rates for these countries will be at least 798/million. These results suggest that any studies of the association of obesity and death rates that do not include countries with both low (only from Asia or Africa) and high obesity rates may not accurately estimate the impact of obesity.

Estimates made at both ends of the obesity spectrum using the figures provided in table 1 offer even more insight. Estimating the expected death rate for the US with obesity rate of 36.2 from the formula in figure 2 would estimate 976 COVID deaths/million. Using the formula from the 41 countries of 100 not in Asia or Africa the estimated death rate=907/million ((3 X 36.2) +798). Both estimates underestimate the actual value of 1,562 deaths/million by a large percentage. This suggests that other factors not measured in this study such as how the pandemic was handled, the age structure of the population and access to health care might help explain the discrepancy with actual death rates. Using Kenya with an obesity rate of 7.1% and regression equation figures in table 1 for either Africa, countries with <15% obesity, or the figure 2 formula yields estimates of 32.7, 40.2, and 103 deaths/million respectively. With an actual death rate of 34.0/million, the first 2 estimates are close to actual, while the one based on figure 2 is off by a factor of about 3. Thus, it appears that the formula in figure 2 is good for countries with higher obesity rates, but for obesity rates ≤15% it might be best to use the formula obtained from those data. It is unclear why the regression results for Asia and Africa would be quite similar to each other but different from the rest of the world with lower slopes and constants. It may relate to diet, lifestyle, and economy as mentioned earlier, and being the only regions with any obesity rates <15%. This might warrant more investigation to determine what factors likely related to diet and exercise produce obesity rates consistently under 15%. These results also suggest that estimates of how much COVID deaths might be reduced by lowering obesity rates will likely be more accurate at lower obesity rates. And any country with an obesity rate above 15% that reduced its obesity rate below 15% could almost certainly have reduced its COVID death rate to <200/million at that point in the pandemic.

It should also be noted that these figures and any estimates only apply for the time-period used in this study which pre-dated the wide use of vaccines. A US study has shown that from 4/19/2021 -2/28/2022 when vaccines were assumed to be available, vaccines had the greatest impact on state death rates among three factors: state COVID vaccination rates, a measure including the 6 underlying conditions [3,4] and states grouped by how they voted in the 2016 presidential election. The latter alone explained 60% of the difference in state death rates [9] or nearly double the apparent effect of obesity alone in this current study. The R2 just for vaccines in that US study [9] was 0.46 for comparison.

These results are consistent with data on hospitalizations and deaths from COVID-19 in the US [3] and worldwide [7]. Not only is obesity one of 6 underlying conditions increasing risk of COVID hospitalizations [3], it is also a known risk factor for 4 others: asthma, cardiovascular disease, diabetes, and hypertension [5,8] so high rates of obesity are also associated with more of these other conditions. Further evidence of the role of obesity in COVID-19 deaths comes from the World Obesity Federation (WOF), which found that in countries with overweight rates >50%, the death rate from COVID was about 10 times that in countries where overweight was <50% [10]. Results showed a nearly flat line for deaths vs. overweight rates for countries with overweight <50%, with the slope rising dramatically above 50%, akin to the findings in this study for obesity. The WOF found that countries with less active populations who consumed higher amounts of animal fats, vegetable oils, sugars, and sugar-sweetened beverages were also more likely to have higher death rates from COVID-19 [10]. A study of 30 industrialized nations [11] found that a regression model including obesity, population density, the age structure of the population, population health, GDP, ethnic diversity, and how the pandemic was handled explained 63% of the difference in COVID death rates between countries. While the results don’t indicate what fraction of the 63% is due to obesity, those results are like those referenced above [9] and not inconsistent with the R2 values found in this current study.

Lowering the obesity rate in countries where it is >15% could potentially reduce deaths from COVID-19, a future pandemic, and from many chronic diseases [8]. At least in the US, this would not be easy as obesity rates are currently increasing [12], but as recently as 1990 the US obesity rate was 11.5% and overweight rate was 44.5% [13]. These are both in the range where COVID death rates are very low as shown in these results and by the WOF [10] and suggest those rates might be attainable again with successful behavior change [14]. Other factors that might contribute to the COVID death rate such as racial, ethnic, and age differences, and health care capacity and quality, would likely be at least as difficult to change and appear not to have much effect in countries with obesity rates <15%. Results from the WOF [10] implicating diets high in animal fats, vegetable oils, sugars, and sugar-sweetened beverages in raising obesity rates might be a good place to start with interventions. Also, results for some countries (e.g. the US) showing that the estimated death rate is much lower than actual, suggests that other factors should be considered as targets for interventions. Handling of the pandemic until vaccines can be developed and distributed is likely a key factor. Study results also raise questions: Is there something special about obesity rates <15%? Why are there so few countries with obesity rates between 10% and 15%? What is unique about Asia and Africa that leads to generally lower obesity and COVID death rates on those continents?

There are several limitations to this study. Quality of the data for different countries may vary in how it was collected and what standards were used. Other factors may affect death rates including quality of the healthcare system, access to care, racial and ethnic disparities that lead to differences in developing COVID, presence of other underlying conditions in the population (including heart disease, hypertension, diabetes, and those not listed such as smoking), how the pandemic was handled in each country, legislative mandates, mask wearing practices, and geographic and cultural differences that might affect transmission. However, those factors do not appear to appreciably affect death rates among counties with obesity rates <15%.

No funding was received for this study.

The author declares no conflicts of interest.