Aspirin is one of the widely-used, cheap and over-the-counter available non-steroidal anti-inflammatory drugs. It has anti-platelet, analgesic and anti-pyretic effects which can result in its indiscriminate ingestion. The liver is the organ of drug metabolism, bio-regulation and immuno-modulation. Thus, this study investigates the effects of varying aspirin doses on the gross and cellular architecture of the liver in Adult Wistar rat model. Thirty rats of comparable weights were divided into 5 groups; consisting of a control group and 4 tests. Group A served as control and was not treated while groups B, C, D and E served as the tests and were treated daily with 35, 70, 105 and 140 mg/kg body weight of aspirin respectively for 30 days. At the end of the experiment, the rats were anesthetized, and the liver dissected out for gross and histological studies. There was a slight dose-dependent increase in body weight but no noticeable gross liver change. However, there were dose dependent histo-pathological changes including sinusoidal congestion and increased cell basophilia from the 70 mg/kg to 140 mg/kg dose. Conclusively, aspirins at doses 70 mg/kg body weight and higher are associated with hepatic pathologies and care should be taken when these doses are administered for long durations.

Aspirin, an acetylated salicylate (acetylsalicylic acid- ASA), is classified among the non-steroidal anti-inflammatory drugs (NSAIDs) [1]. It is one of the well-known, cheap, easily available and widely used Non-Steroidal Anti Inflammatory Drug (NSAID). It is used in versatile purposes which include anti-inflammatory (in joint diseases), anti-platelets (in cardiovascular disease), analgesic and antipyretic [2]. Aspirin is a safe drug at low doses but also has life-threatening side effects when administered at high doses. It has also been reported to cause adverse effects in pregnancy [3]. In-vitro and in-vivo studies showed that aspirin at high doses caused necrosis of the blood vessel tissues [4]. Long-term therapeutic use of aspirin has been associated with nephrotoxicity, hepatotoxicity, gastrointestinal ulcerations, and renal cell cancer and adverse effects to multiple organ systems [5, 6]. Administration over a period of time has been documented to cause significant histopathological changes in the liver [7] that is confirmed to the cellular level [8].

ASA is metabolized via conjugation in the liver to form salicyic acid and several other metabolites which may have justified its hepatotoxic potentials. ASA disperse throughout the body after ingestion, with the highest concentrations found in the blood plasma, liver, renal cortex, heart and lungs [9]. These claims that ASA is toxic to the liver were documented over 30 years ago and thus necessary to validate these claims and possible outcomes of varying doses. It is therefore the aim of this study to investigate the effect of varying doses of aspirin on the liver histological architecture using albino Wister rats as model.

Aspirin (containing 300 mg/tablet acetylsalicylic acid) with trade name Emzor pharmaceutical was purchased from a pharmacy in the study area. This experimental study was conducted in the histological laboratory of Ambrose Alli University, Ekpoma- Nigeria. The rats were procured from the Animal Farm, College of Medicine, Ambrose Alli University, Ekpoma and transferred to the site of experiment where they were allowed two (2) weeks of acclimatization. A total of 30 albino Wistar rats of comparable weights ranging from 165-200 g were used. They were kept in wire mesh cages with tripod that separates the animal from its feces to prevent contamination. During the period of acclimatization, the rats were maintained in accordance with the standard guide for the care and use of Laboratory animals and fed rat chow and clean water ad libitum.

The albino Wistar rats were divided into 5 groups. Group A served as the control and groups B, C, D and E rats were administered daily dose of 35 mg/kg, 70 mg/kg , 105 mg/kg and 140 mg/kg body weight respectively. The aspirin solution was prepared daily by grinding the aspirin tablets and diluting the powder in clean water. Using 1 ml syringe, the corresponding dose was given to each rat based on body weight. The treatment was carried out daily for 30 consecutive days. At the end of 30 days treatment, the rats were sacrificed, and the liver harvested and clean-dried with blotting paper for gross examination. Thereafter, the liver was fixed in 10% Formal saline for histological processing. The classical paraffin sectioning (3-5 µ thick) was cut, stained with Haematoxylin and Eosin staining technique and observed under light microscopy for histopathological changes as previously documented in Idehen et al. [10] and micrographic pictures taken.

Except for the group treated with 35 mg/kg aspirin, there were decrease in body weight of the rats in group C, D and E treated with 70 mg/kg, 105 mg/kg and 140 mg/kg aspirin respectively compared to the control. Gross examination of the liver showed no observable alteration (Table 1).

Table 1: Gross and histological observations in the liver of rats treated with varying doses of aspirin. 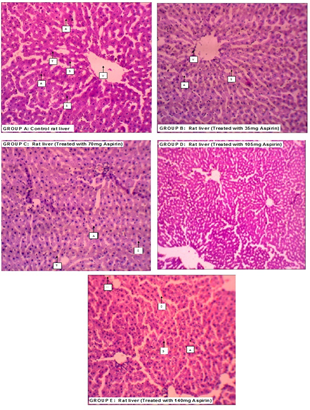 Figure 2: Histological presentations of the livers of rats treated with varying doses of aspirin compared to control (H and E × 100).

In the present study, aspirin ingestions at a dose greater that 70 mg/kg resulted in decrease body weight gain, no gross alteration in the appearance of the liver but increased cell basophilia and at a dose of 140 mg/kg causes moderate sinusoidal congestion. These findings suggest that aspirin at high dose of 140 mg/kg may be hepatotoxic. In line with these findings, Mitchell et al. [7] has previously documented aspirin to cause significant histopathological changes in the liver and Rau et al. [8] reported aspirin treated rat to present liver with hepatocytes degenerative and pycknotic changes, vacuolization, clear sinusoids dilations and hypertrophied hepatocytes. In the present study, except for group B treated with 35 mg/kg aspirin that showed comparable hepatocytes histology with the control, doses from 70 mg/kg cause changes in liver histology. The non observable changes with 35 mg/kg aspirin support the fact that this dose is well tolerated by the liver. Although there has been no published work on the effect of aspirin on the liver using a dose as low as 35 mg/kg, however, Kawar et al. [11], has reported doses as low as 35 mg of soluble aspirin to cause cardio-vascular disorders especially in the Elderly.

In the present study, liver of rats treated with 70 mg and 105 mg of aspirin showed increased cell basophilia with rats treated with 140 mg/kg presenting moderate sinusoidal congestion and severely increased amount of cell basophilia. The increased cell basophilia could develop into hepatotoxicity; that is, lethal hepatocellular injury and hepatic massive micro-steatosis via mitochondrial dysfunction and lipid peroxidation mechanism resulting in marked fall of intracellular ATP and disrupt free fatty acid accumulation in liver. Sinusoidal congestion in the 140 mg/kg treated rats may be associated with accumulation of blood in the venules of the hepatocytes, which is the result of back pressure within veins. These findings are in line with Sangeetha and Krishnakumari [12]. In the liver of rats treated with aspirin, Sherifa [13] has recorded vacuolar degeneration of tubules and Talat et al. [14], reported vacuolization, clear dilations in the sinusoids and hypertrophied hepatocytes with small and degenerating nuclei, have become fused in later part of this experiment.

The administration of aspirin at high dosage for 30 days can cause hepatic problems and changes in the histological architecture of the liver. It can therefore be recommended that aspirin should not be taken at extended durations than normally prescribed by the physician. Also, individuals with liver abnormality should not take aspirin except on recommendations. Policies can also be enacted to make aspirin and other NSAIDS e.g. peroxicam and acetaminopen prescription drugs as they are highly abused due to its relative availability and lack of knowledge of its mechanism of action. More research should be carried out on the effects of aspirin on other glands and organs of the body in order to give a broader view on its mechanism of action so as to help clinicians make an informed decision on any chosen health care plan.