A Gallbladder cancer patient was studied for the etiology of the risk factors, in which it was observed that, the patient was with the disease in very advanced stage and had arsenic contamination in his biological samples more than the permissible limit. Moreover, during the time of his diagnosis he was consuming arsenic contaminated water, more than the WHO permissible limit of 10μg/L. The patient’s household was also in the vicinity of two Himalayan bound rivers. The study correlates that arsenic could be the probable cause of the Gallbladder cancer disease in the patient. Furthermore, studies are also required to establish the link between them.

Gallbladder cancer [GBC] is a lethal and aggressive malignancy among the biliary tree cancers. GBC is the third most common malignancy in gastro intestinal tract. GBC incidence rates are two times more in female subjects compared to men [1]. Gravidity and parity conditions makes more risk for females. Statistically India reports high number of cases compared to all countries together. GBC incidence rates are high in Northern Indian states compared to South Indian sates. According to the Population Based Cancer Registries [PCBR] reports [2012-14] Northern Indian females show 15 times more prevalence rates compared to the South Indian females. The age adjusted rate [AAR] for Chennai was 1.25/100000 compared to Kamrup urban district 17.5/100000 followed by Delhi 11.8/100000 [2]. Most of the studies has been claiming because of proximity of river Ganga, rich heavy metals [As, Pb, Cd] with contamination in soil and water in Indo-Gangetic region being reported with highest number of GBC incidence rates compared to all over India. High arsenic levels have significant association with incidence of GBC [3]. GBC progression follows through the metaplasia, dysplasia, carcinoma and invasive carcinoma in sequence. Due to asymptomatic nature of GBC disease, most of the cases are diagnosed in the last stage (Stage IV) of the disease. Radical cholecystectomy is the only option for the curative discharge of patient with GBC [4]. The overall surgical resection rates ranges 10-30 times [5]. The overall mean survival rate of patients with GBC is 6 months with a 5-years survival rate of 5% [4]. Most of the cases of GBC is diagnosed in fundus part of the Gallbladder and rest of the disease is diagnosed in the neck region and entire body of the gallbladder organ [6]. According to the cancer progression site GBC is differentiated as of three types 1)Adenocarcinoma [AC] 2) Squamous cell carcinoma [SC] 3) Adeno-squamous cell carcinoma [ASC]. Adenocarcinoma represents most frequent histological subtype in 90-95% of the cases. In contrast adeno-squamous and squamous cell carcinomas are relatively rare [7,8]. Adeno-squamous cell carcinoma was the squamous differentiation in adenocarcinoma [9]. ASC and AC both type of carcinomas share the same demographic and clinical features including –symptoms, cholelithiasis, and biochemical investigations. ASC is having high proliferation capacity and poorer prognosis. ASC poorer prognosis is due to diagnosis of this disease at the advanced stage and moreover large size of the tumour [10,11]. The present study emphasizes a rare case of 45 years old male patient with large sized Adeno-squamous cell carcinoma of Gallbladder with lung metastasis.

A 53 years male patient was registered in our institute with a clinical history of pain at the right side of the abdomen radiating to the thorax region for one month. There was no history of fever, jaundice or any other systemic illness. Patient nutritional status was average, Body Mass Index [BMI] was normal with 20.7 kg/m2. There was no personal addiction of tobacco and alcohol. No family history of any systemic illness or any cancer case. Patient residence was Tegahri [village], Thakurganj [Block], and Kishanganj [District], Bihar [GPS location - 26°22'05.1"N 87°57'54.1"E].

USG of abdomen showed gallbladder partly contracted with hypoechoic homogenous mass filled at the fundus and the part of the corpus. The gallbladder showed focal areas of fat plane with interface loss and common bile duct normal with caliber measuring 4.4 mm. The liver, pancreas, portal vein showed normal architecture. There was significant evidence of chronic cholycystitis. On CT scan there was irrelatively well defined mildly enhanced soft tissue speculated lesion measuring 3.4 x 3 cm in right upper lobe. Para septal emphysematous changes in bilateral upper lobe was observed. Another small soft tissue density lesion measuring 5 mm in basal region of right lower lobe was observed. Few enlarged lymph nodes in para-renal lymph nodes station, measuring 1.1cm along with few sub centimetric lymph nodes in pre-vascular lymph node station was observed and there was no evidence of bony metastasis. On cytopathology report of FNAC showed a metastatic adeno-squamous carcinoma. Other investigations of Anti- HCV, HBsAg, Anti-HIV tests was negative. Blood glucose random test results was [121mg%], thyroid functional test reports were normal. It was also observed that there was high level of arsenic [As] contamination in the patient’s blood, hair and water samples. The results showed blood arsenic contamination with 16.48 µg/L followed by hair arsenic contamination with-125.19µg/kg and water arsenic contamination with-20.2 µg /L (Figure 1). Most of the studies has been claiming the arsenic contamination in the biological samples because of proximity of river Ganga, rich with heavy metals [As, Pb, Cd] contamination in soil and water Indo-Gangetic region being reported with highest number of GBC incidence rates compared to all over India. High arsenic levels have significant association with the incidence of GBC [3]. 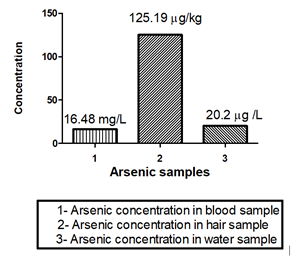 Moreover, the patient’s household was situated near the two tributaries of river Ganges - Budhi Kanakai and Mechi (Table 1). These rivers are Himalayan bound rivers which carry lots of arsenopyrite or arsenic rich sediments in the plain region of this area which contaminating the groundwater sources (Figure 2). In the household handpump of the GBC patient, it had arsenic contamination more than the permissible limit. The patient’s biological samples also had the arsenic contamination more than the permissible limit.

Table 1: Showing distance of rivers from the GBC patient’s household. 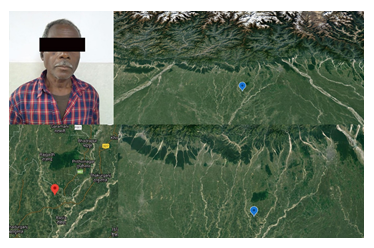 Figure 2: Showing GBC patient’s household and its probable cause of arsenic contamination in his groundwater source.

Patient’s disease diagnosis was done as adeno-squamous carcinoma of gallbladder with lung metastasis. After diagnosis patient presented to the palliative therapy. Initially patient was treated with Gemcitabine [800mg] monotherapy. From 2nd cycle of chemotherapy patient was suggested for combination therapy of Gemcitabine [1400mg] and Cisplatin [55gr] D1 and D8 basis.

Arsenic is an established human carcinogen. High levels of arsenic contamination in ground water could be one of the confounding factors for the cause of the GBC incidence rates. Chronic exposure to the arsenic causes cholecystitis, cholelithiasis of Gallbladder [12]. Arsenic activates the Hippo-signaling pathway which is responsible for the cell survival and cell proliferation. Hippo-signaling pathway was the reason for most of the carcinomas including skin and gallbladder [13]. In India, West Bengal, Bihar, Uttar Pradesh, and Assam are the states reported with groundwater arsenic poisoning. These states are sharing the same Himalayan bound rivers [Ganga-Brahmaputra-Meghana plains] where the humans are mostly affected by groundwater arsenic poisoning in this part of Asian sub-continent [14]. Various types of skin diseases and other malignancies were observed due to arsenic toxicity including melanosis, keratosis, hyperkeratosis, dorsal keratosis, and non- pitting Oedema to Gangrene [15]. In this study, patient was exposed to a high arsenic contamination throughout his life. There was relatively very high level of arsenic concentration in the subject’s blood and hair samples. Household hand pump water sample collected showed high concentration of arsenic with levels as 209.29 µg/L, which is more than the normal levels. According to the World Health Organization [WHO] and the U.S environmental protection agency [EPA] the recommended threshold is 10µg /L for inorganic arsenic concentration in drinking water, 1µg /L for blood arsenic. Compared to these standards, concentration what we observed is very high. As per the Central Government Groundwater Board, Ministry of Water Resources, River Development and Ganga Rejuvenation, Government of India, in Bihar out of 38 districts, 22 districts are having total population nearly to 10 million were reported by arsenic ground water contamination above 50 µg/L and soil 0.05mg/l [15, 3]. Moreover, there are studies which correlate the arsenic contamination in groundwater with disease of cancer [16-22].

The authors are thankful to Mahavir Cancer Sansthan and Research Centre for providing the patient related information and the biological samples for arsenic assessment by Atomic Absorption Spectrophotometer and NIPER- Hajipur for the financial assistance.

The authors have no conflict of interests.