Efficacy and Safety of Zanubrutinib in IgA-secerning Lymphoplasmacytic Lymphoma

Non IgM-Lymphoplasmacytic Lymphoma (LPL) is a rare chronic lymph proliferative disorder with worse outcome with respect to classical LPL and Waldenstrom Macroglobulinemia. Therapeutic options are limited and differently from other indolent lymphomas no specific approved therapies are available. Here we present the case of a IgA-secreting LPL previously treated with 6 lines of therapies including immuno-chemotherapy, proteasome inhibitor and radiotherapy. At the last relapse this patient was successfully treated with zanubrutinib monotherapy within the BGB-311-AU-003 trial. Treatment with this BTK inhibitor showed to be well tolerated and led to a rapid and still ongoing response at 4 years follow up.

Lymphoplasmacytic Lymphoma (LPL) is a rare chronic lymphoproliferative neoplasm characterized by B lymphocytes proliferation with varying degrees of plasmacytic differentiation that may involve bone marrow (BM), lymph nodes, and/or spleen. According to WHO, Waldenstrom Macroglobulinemia (WM) is defined as a subset of LPL with BM infiltration and detectable IgM paraprotein. Only 5% of LPL are not-IgM-secreting (non-IgM LPL) and thereby do not fit with WM definition [1]. While Bruton Tyrosine Kinase Inhibitors (BTKi), ibrutinib and zanubrutinib, are specifically approved for WM based of phase II and III randomized trials [2, 3], non-IgM LPL management generally follows the same recommendations of other lymphoproliferative disorders. These patients have a worse survival [4, 5] compared to WM and represent an unmet clinical need, being systematically excluded from clinical trials and from the opportunity to receive BTKi, that firstly changed the WM history and outcome. To the best of our knowledge, ibrutinib was successfully used in only two cases of non-IgM LPL in the literature, one IgA and one IgG-secerning [6, 7]. Considering the low incidence of non IgM-LPL and the lack of specific salvage therapies, we here present the case of a patient with multiple relapses of a IgA secreting LPL treated with zanubrutinib, a novel potent next generation BTKi which exhibits less off target activity against other tyrosine kinases and the potential for improved safety and tolerability. The patient was enrolled in the Phase I basket trial BGB-311-AU-003 (NCT02343120) and was the only patient presenting with this histological subtype enrolled worldwide. Written informed consent was obtained from the patient for publication of this case report.

In September 2000, a 44-year-old woman was referred to our hematology unit due to anemia and monoclonal IgAk component. Bone marrow and cervical lymph node biopsies showed LPL infiltration characterized by CD20+, CD79a+, MUM1-, Cyclin D1-, CD23-, CD5-, CD25-, Annexin- B cells with a minor (5-6%) k light chain-restricted plasma cell component. Diagnosis of IgA-secerning LPL was made. Patient was treated with 6 cycles of rituximab, cyclophosphamide, vincristine, prednisone, and doxorubicine, maintaining stable disease. After initial chemo immunotherapy, multiple disease relapses occurred requiring 4 further lines: high dose cytarabine for 4 cycles (February 2002, no response); dexamethasone, cyclophosphamide, etoposide and cisplatin for 2 cycles, followed by 2 courses of fludarabine + cyclophosphamide (November 2002, partial response), radiotherapy with a total dose of 30Gy on paravertebral and pre sacral pathological tissue (June 2004, complete remission), and bendamustine for 6 cycles (December 2012, partial remission). Of note, during these prior treatments, the patient developed major infections, including S. Aureus sepsis, S. Agalactiae meningitis and multiple hospitalizations for pneumonia despite intravenous Immunoglobulin (Ig) supplementation. In February 2016, patient underwent the sixth line of treatment with bortezomib, dexamethasone, and rituximab due to transfusion-dependent anemia related to LPL massive marrow infiltration and relapse of paravertebral and presacral tissue. Partial response was achieved and maintained until June 2017 when a novel site of extranodal disease, a mammary nodule, was documented. As no other treatment criteria were met, the patient remained under observation until January 2018 when she was in need of treatment due to disease-related transfusion-dependent anemia. Considering the lack of further available therapies, patient was enrolled in the phase I BGB-3111-AU-003 protocol (NCT02343120) to receive zanubrutinib monotherapy. Before treatment initiation, the patient had normal absolute neutrophil, lymphocyte, and platelet counts. IgA level was 1623 mg/dL with 0.9 g/dL IgA Monoclonal Spike (MS). Bulky paravertebral and presacral masses, left breast nodule, laterocervical and abdominal adenopathies with maximum diameter of 4 cm, and mild splenomegaly were reported on CT scan. Bone marrow evaluation showed massive interstitial LPL infiltration. With regards to biological characterization, complex karyotype was detected and mutational analysis by polymerase chain reaction showed MYD88 L265P mut/CXCR4WT profile. In February 2018, continuous oral treatment with zanubrutinib at 160 mg twice daily was started. The patient became transfusion independent from C1D15 with hemoglobin values decreasing upon infective episodes but remaining stably above 10 g/dL. IgA normalized at C2D1 with undetectable IgA MS at C3D1. In Figure 1, hemoglobin and immunoglobulin values at different time-points during zanubrutinib treatment are presented. Moreover, at C3D1, first disease evaluation with CT scan showed nodal and extranodal partial response. In March 2020 (24 months from zanubrutinib start), the patient achieved complete nodal remission. As of November 2021, after 44 months of zanubrutinib therapy, the patient is still on treatment in a persistent nodal and extranodal complete response, with undetectable IgA MS and normal complete blood count despite persistent BM infiltrate. During the 44 months of zanubrutinib exposure, neutropenia was the most common toxicity reported, and was successfully managed with G-CSF. The only recorded extra-hematological, non-infective toxicity was one episode of grade 1 diarrhea. Considering the patient’s susceptibility to infections, intravenous Ig therapy was administered from cycle 3 to cycle 16. Progressive normalization of IgG level was obtained, with a > 40% increase from baseline, maintained despite the discontinuation of Ig supplementation. The patient experienced 2 episodes of grade 3-4 infection: 1 sepsis due to Haemophilus influenzae and 1 radiologically confirmed pneumonia. Zanubrutinib was temporarily discontinued during infective episodes and related hospitalizations, for a total of 32 days. No dose reduction was needed. Immunoglobulin, hemoglobin changes and infective episodes while on zanubrutinib are shown in (Figure 1). 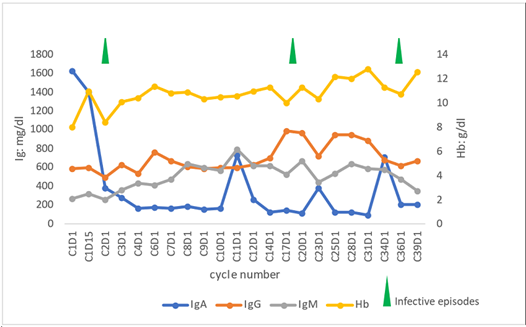 Figure 1: Immunoglobulin and hemoglobin changes and infective episodes while on zanubrutinib.

Non-IgM LPL are underrepresented in literature. Unlike WM, extra medullary and extra nodal involvement are significantly more common in non-IgM LPL, while hyper viscosity syndrome is rare. Clinical course is heterogenous with some reports suggesting shorter time to first treatment and worse PFS compared to WM [4, 5]. Consistent with previous reports, the clinical presentation of our patient was characterized by extra nodal involvement, short time from diagnosis to first treatment, and multiple disease recurrences. Although in the last years the genotypic profile of WM has been better defined after the identification of MYD88 L265P and CXCR4 mutations [8, 9], little is still known about the genetic landscape of non-IgM LPL. The presence of MYD88 L265P mutation was analysed in 3 series and detected in 40-44% of cases [4, 5, 10] while CXCR4 mutation rate was 24- 25% [9], thus suggesting that many of these cases may be biologically similar to WM. The genetic profile of our patient favoured the use of a BTKi, since as demonstrated for WM, MYD88 L265Pmut /CXCR4WT status is the one with the best outcome [11]. Furthermore, at the time of last disease recurrence, available therapeutic options were very limited thus enrolment in a clinical trial with zanubrutinib seemed reasonable. In a recent phase III trial, zanubrutinib showed comparable efficacy, better quality of response according to investigators, more sustained IgM reduction, and lower toxicity compared to ibrutinib in patients with WM [3]. Not differently from the kinetic of response in WM [3], zanubrutinib in this patient, was highly effective exerting an immediate disease control, with sustained increase in hemoglobin concentrations and decrease in IgA levels. The rapid efficacy was also observed after only 2 months of treatment on nodal and extranodal sites. Treatment with zanubrutinib showed to be tolerable and, more importantly, adverse events rate was low, requiring only short drug interruptions and with no need for dose reductions. Neutropenia represents a common adverse event in patients treated with zanubrutinb, although this does not translate into an increased rate of infections. In our patient, accordingly, neutropenia episodes were time limited and rapidly controlled by growth factors; despite the heavily pre-treated status and the previous infectious disease history, during zanubrutinib treatment we observed a lower susceptibility to major infections. Moreover, the stabilization of IgG level even after the interruption of Ig supplementation could be ascribed to BTKi potential to restructure host immune resistance, as reported with ibrutinib [12]. In conclusion the favourable outcome observed with zanubrutinib in this non-IgM LPL case is consistent with data observed in previous experiences with ibrutinib. Although larger series are needed to draw a firm conclusion, the use BTKi in this difficult-to-treat condition should be considered as a valid therapeutic option.