Patients and Methods: The immunophenotype (CD3, CD8, PD-1, PD-L1) was immunohistochemically analysed at the invasion margin (IM), the stromal (S) and intratumoral (IT) areas of 53 liver metastases (LM) and 15 lung metastases (LuM), correlated with clinical pathological parameters and statistically evaluated by the Fisher`s exact-Test (two-tailed).

Up to 25% [1] of the colorectal cancer (CRC) patients initially are diagnosed with synchronous liver metastasis and less frequently with lung metastasis [2-5]. In addition, despite radical surgery accompanied by drug treatment, locally advanced CRC frequently develops metachronous metastasis mostly within the first three years after first-line treatment [6, 7]. The obvious need for more efficient treatment strategies to fight metastatic CRC is reflected by an increasing number of drugs and combination therapies available. For example, recent approval was obtained for TAS-102 [8], ramucirumab [9], aflibercept [10] or regorafenib [11, 12]. Furthermore, three immunotherapy options, namely pembrolizumab [13], nivolumab and the combination nivolumab plus ipilimumab [14] are approved for metastatic colorectal cancer patients.

However, treatment with checkpoint inhibitors is restricted to the small fraction of MSI-high/dMMR selected CRC patients [15]. Currently an increasing number of predictive biomarkers independent of the MMR status for immune therapy are being discussed, such as tumor mutation burden (TMB), specific gene expression signatures, PD-L1 expression, the microbiome and immunophenotyping [16]. Nevertheless, some patients who fulfil these selection criteria do not respond to immunotherapy. Conversely, there are patients without any of these criteria revealing a good response to checkpoint inhibitors [17]. This discrepancy underscores the need of predictive factors allowing precise selection of cancer patients for immunotherapy.

The patient cohort consists of 68 patients with metastatic colorectal cancer, receiving metastasectomy at the Department of General, Visceral, and Transplantation Surgery, Ludwig-University Hospital, LMU Munich, Munich, Germany. From each patient a liver metastasis (LM, n=53) or a lung metastasis (LuM, n=15) was analysed. Double-coded tissues and the corresponding data used in this study were provided by the Biobank of the Department of General, Visceral and Transplant Surgery in Ludwig-Maximilians-University (LMU). This Biobank operates under the administration of the Human Tissue and Cell Research (HTCR) Foundation. The framework of HTCR Foundation, which includes obtaining written informed consent from all donors, has been approved by the ethics commission of the Faculty of Medicine at the LMU (approval number 025-12) as well as the Bavarian State Medical Association (approval number 11142) in Germany.

Additionally, a standardized HE-staining was performed to estimate the percentage of cancer cells and the portion of necrosis.

The immune cell markers CD3, CD8 and PD-1 were quantitatively analyzed as previously described [31, 33-35]. Briefly, for each marker, three hot spot regions were chosen in three topographically different areas, namely the invasive margin (IM), the stromal (S) and intratumoral (IT) areas. The selection of the hot spot region focused on the highest density of CD3+ cells identified at low magnification (50x). The IM was defined as the junction between the benign reference tissue and the tumor area according to pathological consensus guidelines [36]. Stromal leukocytes were determined as positive cells, which are in the connective tissue, without any contact to tumor cells and outside of the invasive margin. Intratumoral leukocytes were defined as positive cells which stay in close contact with tumor cells. Examples for evaluation are given in Figure 1 A-D. Three pictures were taken of each region with 200x magnification. CD3+ cells and CD8+ cells were examined in the same hot spot regions. For PD-1, hot spots were detected in other tumor regions.

Cell counting was done with the open source Program ImageJ. First, background was subtracted. Afterwards a colour deconvolution was performed manually by choosing three representative areas, namely background, haematoxylin and AEC-staining. An automatic threshold transferred the AEC-layer-picture into a binary picture. The watershed method was used to separate cell clusters. The absolute number of cells was counted adjusting the ´Analyze-Particle-Tool´ with the values 700 to infinity for size and 0.2 to 1.0 for circularity. For the evaluation of the intratumoral cells, the area to be evaluated within the picture was additionally defined exactly with the ROI (Region of Interest)- Manager. 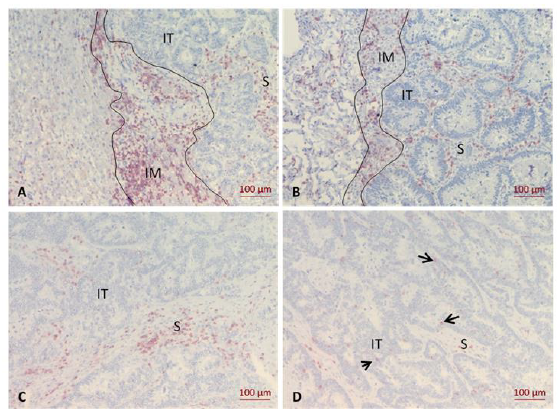 PD-L1 was expressed on tumor cells, fibroblasts and leukocytes with different intensities [37]. Therefore, the percentage of PD-L1 positive cells had to be evaluated semi-quantitatively in relation to the total amount of epithelial cells positive for EpCAM or cytokeratin and intratumoral CD45 positive immune cells. The cut off for PD-L1-positivity was ≥1% of tumor cells and intratumoral immune cells according to previous studies [38, 39].

All statistical analyses were performed with IBM SPSS v. 23 and GraphPad Prism 5. The average cell count of the three hot spots for each topographic area was calculated and then multiplied with a factor to cells/mm² for each slide and each region. Separately for each marker and each topographic area of counting, the counts of CD3+, CD8+ and PD-1+ cells were classified in low and high by the cut-off related to the mean. Normal distribution of cell counts was determined using the Kolmogorov-Smirnov-test. Because variables were not normally distributed, the Mann-Whitney-U-Test was used to compare LM and LuM. Correlation of clinical-pathological parameters and lymphocyte counts was performed with the two-tailed Fisher’s exact test. Adjuvant chemotherapy was defined as treatment of the primary tumor after its removal. Neoadjuvant chemotherapy was defined as treatment of the metastasis before surgical resection. A p-value of ≤ 0.05 was considered significant.

A total of 68 advanced colorectal cancer patients diagnosed with liver metastasis (n=53) or lung metastasis (n=15) were included in this study. Most of the patients were initially diagnosed in an advanced UICC stage. Thus, the majority of patients received adjuvant oxaliplatin-based first line chemotherapy. Patients with a KRAS wildtype tumor more frequently developed LM (27 of 38, 71.05%) while a mutated KRAS status was often associated with LuM (6 of 9, 66.67%). Patient characteristics are summarized in detail in Table 1.

Both colorectal liver and lung metastases showed the strongest immune cell infiltrate at the invasive margin followed by the stroma. In contrast, the intratumoral fraction of immune cells was sparse. This finding was observed for CD3+, CD8+ and PD-1+ immune cells. In all three topographic locations CD3+ cells represented the highest number of leukocytes, followed by CD8+ cells and PD-1+ cells (Table 2, Figure 2). 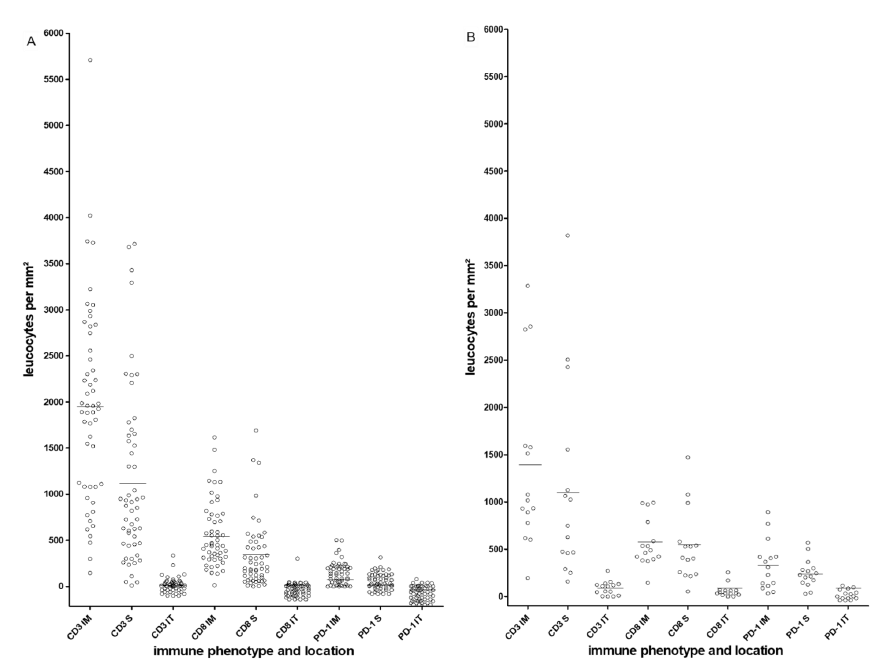 All counting performed in different topographical areas; IM, invasion margin; S, stromal; IT, intratumoral; *, Mann-Whitney-U-test was used; #, in one case the IM was not defined; n, number of samples; SD, standard deviation is given in parentheses.

Table 2: Comparison of the immune phenotypes in colorectal liver and lung metastases.

The immune infiltrate in liver and lung metastases was correlated with patient related characteristics, treatment related parameters after surgery of the primary tumor and metastasis related clinical pathological parameters. All results are documented in detail in Supplementary Tables S1a-3c.

Chemotherapy, which was performed after surgery of the primary tumor, was found to have a significant modulating impact on the immune infiltrate in liver metastases. A high fraction of CD3+ cells at the liver invasion front was detected after adjuvant chemotherapy (CD3+ IM high: 19 out of 31, 61.29%). In contrast, in chemo-naive liver metastases the number of CD3+ cells was low (CD3+ IM low: 16 out of 21, 76.19%; p=0.011). Similar, CD8+ cells were enriched at the invasion front after first-line chemotherapy (CD8+ IM high: 16 out of 30, 53.33%), but were low if no chemotherapy was performed (CD8+ IM low: 18 out of 22, 81.81%; p=0.02). The increase of the immune infiltrate was independent of the type of adjuvant drug treatment. No difference was found between oxaliplatin-based, irinotecan-based and antibody-based treatment in this small cohort. Interestingly, all but two (eight of ten cases, 80%) metachronous liver metastases, which received an adjuvant treatment, revealed a high CD3+ infiltrate at the IM, despite a long progression free interval (mean 24.8 months, range >6 to 77 months).

The treatment decision factor KRAS was found to correlate with the extent of the CD8+ IT infiltrate. Liver metastases originating from KRAS wildtype primary tumors often exposed a high CD8+ infiltrate within the tumor nests (CD8+ IT high: 9 out of 27, 33.33%). Conversely, all KRAS mutated tumors (n=11) showed a low density of CD8+ IT cells (p=0.038).

The clinical-pathological relevance of the immune phenotype and the topographic distribution of the intrametastatic immune infiltrate was immunohistochemically analyzed in 53 liver metastases and 15 lung metastases of CRC. In both metastatic locations CD3+, CD8+ and PD-1+ lymphocytes were detected in a high fraction at the invasive margin, and to a lesser extend in the stromal area. In contrast, intratumoral immune cells were rare. Correlation with routine clinical pathological factors identified a significant accumulation of CD3+ and CD8+ T-cells at the invasive margin of liver metastases after adjuvant chemotherapy. High density values of CD3+ cells and CD8+ cells were found independent of the substance class used in the adjuvant treatment. Chemotherapy can provide broad-acting immune stimulating effects such as T-cell priming and recruitment [40]. Indeed, in the neoadjuvant setting oxaliplatin-based and anti-EGFR-based treatments strongly enhanced the immune infiltrate in liver metastatic lesions [30, 41]. These results indicate that standard of care therapy might induce neo-antigen expression elevating cancer immunogenicity [42]. Considering the large number of deviations in the clinical chemotherapeutic settings, the correlation between the extent of drug treatment and the extend of the CD3+ and CD8+ infiltrate needs to be further analyzed in preclinical models. In addition, chemotherapy might result at least in part in a less immune suppressive microenvironment allowing surrounding T-cells to infiltrate [26]. However, successful immunotherapy, for example treatment with bispecific antibodies [43], checkpoint-inhibitors [44] or CAR T-cells [45, 46] require immediate proximity between cancer cells and leukocytes. Therefore re-direction of the leukocytes from the invasive margin into the tumor nests is necessary and might be stimulated by additional therapeutics such as GM-CSF or CCL5 [47-49].

Correlation between the immunological factors and the extent of the liver metastatic disease revealed that high intratumoral infiltrates of CD8+ cells and a high PD-L1 expression were more frequently observed in patients diagnosed with restricted liver metastases reflecting less aggressive metastatic behaviour. This finding suggests that CD8+ cells might control tumor spread [50].

In addition to the liver metastases, immune phenotyping was performed in a small cohort of lung metastases. Significant differences in the immune contexture were identified between liver and lung metastases. Lung metastases revealed a significant stronger infiltrate of CD3, CD8 and PD-1 positive cells in both, the stromal and intratumoral compartment. This finding shows that lung metastases can be an attractive target for immune therapy.

Correlation with therapeutic variables revealed a significant correlation between performance of neoadjuvant second-line chemotherapy and a high PD-1 infiltrate at the invasion margin. This finding supports chemotherapy as a precondition for immunotherapy not only in liver metastases but also in lung metastases of colorectal cancer. In contrast to LM, sidedness of metastasis and neoadjuvant treatment were identified as additional selection parameters for immunotherapy of LuM.

Moreover, lung metastases were observed more frequently PD-L1 positive compared to liver metastases. This finding supports treatment of colorectal lung metastasis with checkpoint inhibitors similar as reported for the standard therapy of non-small-cell lung cancer. The biological differences reported for the first time between liver and lung metastases might result in different treatment strategies of the CRC metastatic lesions. However, the results obtained in the present pilot study need to be confirmed in an enlarged cohort.

In conclusion, this pilot study identified differences of the immune contexture between liver and lung metastases of colorectal cancer. Most important, lung metastases revealed higher counts of intratumoral CD3+, CD8+ and PD-1+ cells and a more frequent PD-L1 expression. This indicates that lung metastases are appropriate for immunotherapy. Routine clinical pathological parameters were identified as patient stratification markers for immunotherapy, i.e. KRAS status, tumor burden in liver metastases, sidedness of lung metastases and previous chemotherapy in both metastatic lesions. Thus, in addition to the known biological indicators, namely the MSI/MSS status, the PD-L1 status and the extent of lymphocyte infiltration 55, these clinical factors are suggested to be involved in precision immunotherapy. Based on these results, new treatment strategies can be proposed, specifically combination schemes of immunotherapy with EGFR inhibition and sequential treatment of chemotherapy with subsequent checkpoint inhibition.

The authors declare no potential conflicts of interest.