Background and objectives: Few data are available about anticoagulation management beyond 6 months in patients with cancer associated thrombosis (CAT). Our objective was to describe anticoagulant treatment modalities up to 12 months.

Methods: The management of the anticoagulant treatment beyond 6 months was described in this initially retrospective non-interventional French multicenter study in patients treated with low-molecular-weight heparins (LMWH) still alive at the end of an initial 6-month treatment period. Clinical outcomes, including venous thromboembolism, recurrence, bleeding and deaths have been published previously.

Conclusion: Anticoagulation beyond 6 months and up to 12 months was in accordance with clinical practice guidelines suggesting that treatment should be continued as long cancer is active or in the absence of bleeding risk. Anticoagulant treatment discontinuation beyond 6 months was influenced by the favorable courses of both malignancy and thromboembolic disease, as well as patient’s preference.

The risk of venous thromboembolism (VTE) in patients with cancer is 7-fold higher compared to patients without cancer [1]. Managing patients with CAT represents a significant challenge since they are at higher risk of both VTE recurrence and major bleeding compared to patients without cancer [2, 3]. Clinical practice guidelines for the treatment of CAT recommend a minimum of 6 months anticoagulant treatment duration [4-8]. The rate of adherence to guidelines including the use of low-molecular-weight heparins (LMWH) remains poorly documented. In the USA, before the introduction of direct oral anticoagulants (DOAC), warfarin and LMWH were used in 50% and 40% of patients, respectively. Over 6 months, only 13% of patients who initiated LMWH remained on them while 30% remained on oral anticoagulants. Also, more patients switched from LMWH to warfarin and other anticoagulants (44%) versus those who switched from warfarin (28%) [9]. In a cohort of 372 European CAT patients treated with LMWH followed up to 6 months the cumulative incidence of discontinuation was 21% after a median period of 90 days and one of five patients stopped LMWH injections because of side effects [10]. There is no established consensus on the optimal duration of the anticoagulant treatment in patients with CAT, especially beyond 6 months. Most guidelines tend to recommend the extension of the anticoagulant therapy for as long as the cancer is active and/or the patient receives an antineoplastic treatment which may be associated with an increased risk of VTE recurrence although these recommendations are not based on randomized trials [4-8].

The design and the main results of the USCAT study have been previously described [16]. Briefly, adult patients with cancer and objectively diagnosed acute VTE previously included in both prospective observational cohort studies aXa and PREDICARE and who were still alive and having given their consent for the use of their data were eligible. All 432 participants were enrolled in 59 French hospital centers from August 4, 2011 and April 21, 2016 [16]. The USCAT study was approved by the Institutional Review Board of the University Hospital of Saint-Etienne, France (Institutional Review Board: IORG0007394, Number RBN342018/CHUSTE).

Main study objective was to describe the anticoagulant treatment for the management of CAT patients from the 6th month to the 12th month following the index VTE.

The same independent investigator had access to the primary data and reviewed medical records of all included patients and recorded data in a standardized case report form. Relevant data, including patient demographics, cancer status and treatment, and anticoagulant therapy were collected up to 12 months after the index VTE event. Information on changes in cancer status, cancer treatment and anticoagulant therapy, specifically notified reasons influencing changes in strategy (as favorable cancer or VTE course, major bleeding, patient’s preference or physician’s decision) was collected. Continuous data were expressed as mean ± standard deviation or median and categorical vari-ables were expressed as absolute numbers (percentages).

The rate of patients continued on LMWHs, VKAs or DOACs beyond 6 months and their 95% confidence interval (95% CI) were also presented. The duration of treatment before the definitive discontinuation of anticoagulation or the switch to another anticoagulant depending on the reasons for definitive discontinuation or switch were graphically summarized by boxplots. Statistical analyses were performed using SAS version 9.4 software (SAS Institute Inc, Cary, NC, USA) and graphics were performed using R statistical software, version 3.6.2.

Therapeutic strategy at 6 months is available for 422 patients of the 432 included patients. Patient’s characteristics according to the anticoagulant treatment strategy at the end of the initial 6-month treatment is summarized in table 2. At 6 months the anticoagulant treatment was continued in 348 patients (82.5%) while it was discontinued in 74 patients (17.5%) of whom 60 patients before the inclusion and 14 patients within the first

month of the inclusion in the USCAT study.

3.3 Choice of the anticoagulant

The figures in italics correspond to the percentages of patients who continued or discontinued the anticoagulant treatment at 6 months among the total number of patients who presented the characteristic. Upper gastrointestinal tumor: gastrointestinal and oesophagus. Other solid tumor: ENT, cerebral, sarcoma, melanoma and peritoneal. SD: standard deviation; VTE: venous thromboembolism; PE: pulmonary embolism; DVT: deep vein thrombosis; $ more than one event in several patients.

• the information about anticoagulant was available for 422 patients

Table 2: Baseline demographic and clinical characteristics of included patients according to therapeutic strategy at 6 months.

Table 3: Anticoagulant treatments continued in the 348 patients beyond 6 months following the index VTE. 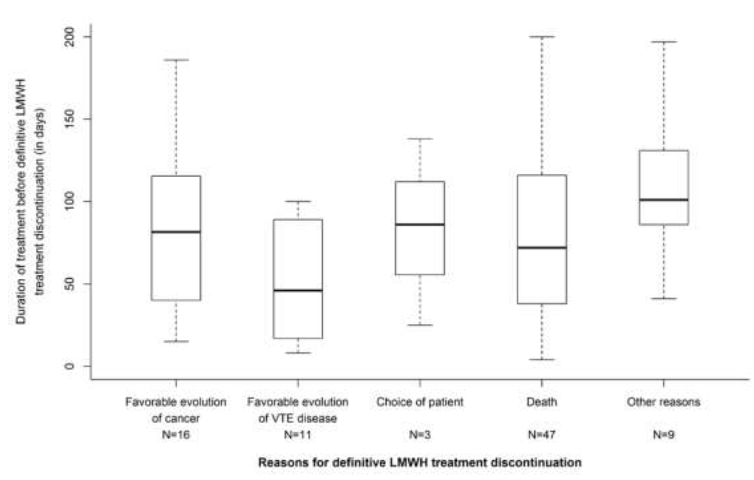 Figure 1: Time to- and main reasons for LMWH permanent discontinuation beyond 6 months after the initial VTE. 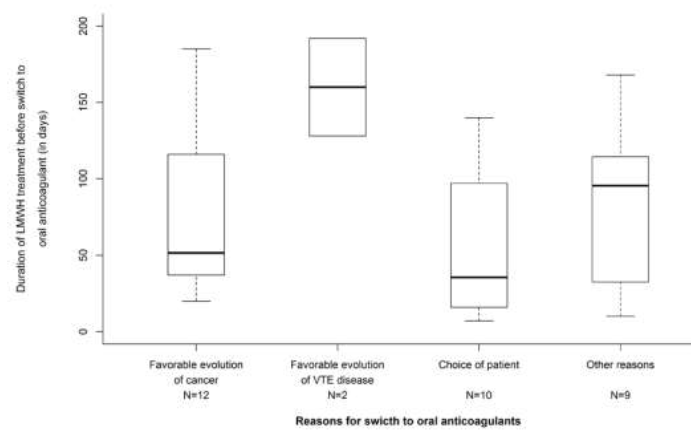 Figure 2: Time to- and main reasons for switching from LMWH to oral anticoagulants (DOAC or VKA) beyond 6 months after the initial VTE.

The description of the anticoagulant treatment in USCAT represents an additional information on the management of CAT patients up to 12 months after the index event in the real world of clinical practice. As previously published [16], a total of 432 patients initially treated with the LMWH tinzaparin and completing a 6-month follow-up were included in the USCAT study, of whom 332 were still alive and followed at m12 with a median treatment duration beyond 6 months of 137, 183 and 183 days with LMWHs, VKAs and DOACs, respectively which is in accordance with results from studies summarized in Table 1.

During the 6-to-12-month follow-up the treatment was definitively discontinued in 86 (33.7%), 12 (21.8%) and 8 patients (27.6%) treated with LMWHs, VKAs and DOACs, respectively. The main reason for definitive LWMH discontinuation was based on physician’s judgment, when the overall patient condition was considered at lower risk of VTE recurrence related to a favorable course of the cancer or of the thromboembolic disease (Figure 1). Little concern was reported about bleeding risk regarding treatment discontinuation. In the HOKUSAI VTE-Cancer extension study, investigator’s decision based on the estimated benefit-risk, patient’s preference relative to the inconvenience of dosing, and cancer considered as cured, were emphasized as main reasons for permanent discontinuation of dalteparin therapy beyond 6 months [11]. The decisions based on physician’s judgment are in accordance with clinical practice guidelines suggesting that treatment should be continued as long the cancer is active or in the absence of bleeding risk and consistent with previous observations in France emphasizing a case-by-case approach for the management of the anticoagulant treatment in CAT patients [4, 16, 18, 19]. Our observations are consistent with data on the acceptability of LMWH treatment in CAT patients, as the TROPIQUE qualitative study showed high rates of convenience and treatment satisfaction after 6-month treatment with LMWH [20]. DOACs may represent an alternative for convenience and treatment satisfaction as in COSIMO trial [21].

Among 256 patients in whom LMWH was continued beyond -6 months, treatment was switched to another anticoagulant treatment in 42 patients, mostly to VKAs and DOACs in 20 (47,6%) and 13 (31.0%) patients, respect-tively. The decision to switch to an oral anticoagulant, usually made around the 6th month, was based of patient’s preference carefully assessed by the physician (Figure 2). Our results are consistent with FRONTLINE 2 [22] in which interviewed physicians were maintaining the anticoagulation after initial heparin, by using oral anticoagulant medications in the longer term. In USCAT, the oral anticoagulation beyond 6 months mainly consisted of VKAs in 56 patients. In these patients most anticoagulant switches were made to LMWHs. The main reason may have been that at the time of the initiation of aXa and PREDICARE studies, DOACs were not usually recommended for the treatment of CAT patients. Previous publications have considered DOACs as an alternative to LMWH for convenience and treatment satisfaction reasons as shown in the COSIMO trial [21]. This non intervene-tionnal study aimed at evaluating patient-reported treatment satisfaction following a switch from standard of care (SOC) (more than 4 weeks of LMWH or VKA therapy) to rivaroxaban for the treatment of CAT. It suggested an increase in treatment satisfaction in CAT patients when switching to rivaroxaban due to better convenience and acceptability than SOC therapy (mostly LMWH).

Furthermore, a discrete choice experiment on COSIMO study patients preferences revealed that the main reason guiding the patient willingness to switch to oral anticoagulation was that oral route of administration was associated with better convenience [21].

Given the observational retrospective nature of our study, limitations were related to the absence of randomization and several missing data that made difficult the comparison of different treatment strategies. Another potential limitation is that DOAC’s were considered as emerging therapeutic options at the time of PREDICARE and aXa studies initiation when predominantely VKA and LMWH were available for the treatment of CAT.

USCAT is the largest observational study to date on CAT patients treated with LMWH beyond 6 months after the VTE index event (N = 432) while a large proportion of patients have completed 12-month follow-up (n=332). Clinical protocols and event adjudication in PREDICARE [15] and aXa (NCT02898051; https://clinicaltrials.gov/ct2/ show/NCT02898051) studies were homogeneous, allowing the inclusion of a large sample size in USCAT. Moreover, patients characteristics were documented 6 months after the index VTE i.e., at the time when the treatment strategy for the subsequent 6 months was to be discussed. Reasons influencing therapeutic decisions for the extended anticoagulant treatment with LMWHs beyond 6 months in patients with CAT discussed in our study reflect the real-life physician’s experience in the clinical practice.

In this real-world practice analysis, anticoagulant treatment with LMWH was continued beyond 6 months and up to 12 months in most patients with CAT. However different factors have influenced physician’s decisions beyond the initial 6 months of therapy. Beyond 6 months, treatment discontinuations were mainly related to the favorable course of the malignancy or the thromboembolic disease, while switches to oral anticoagulants were guided by patient’s preference.

Unlike the risk management approach during the initial 6 months, the risk of bleeding was not a major concern that would justify treatment discontinuation beyond 6 months. Based on our observations it therefore seems fundamental to re-assess the anticoagulation strategy after the initial 6 months of therapy to optimize physician’s decision. Establishing more formal clinical practice guidelines for the long-term anticoagulant treatment in CAT patients beyond 6 months with the identification of therapeutic decision making factors may require further clinical research in the form of prospective controlled trials.

LEO-PHARMA provided an unrestricted educational grant. The sponsor and funder of the study had no role in the study design, data collection, analysis, or writing of the report. Authors wish to thank Vidal Benatar, MD, for his assistance in writing this manuscript.