Comparison of Different Schedules of Rituximab and Chlorambucil in Previously Untreated Chronic Lymphocytic Leukemia: A Retrospective Study of Krohem

Due to age and comorbidities many patients with CLL receive chlorambucil as front-line treatment. Doses and schedules of this drug vary widely but it is not clear whether this affects outcomes. We performed this retrospective analysis to compare the efficacy and toxicity of continuous high-dose chlorambucil (12-20 mg daily until response or toxicity) (cHD-Clb-R) and intermittent high dose chlorambucil (8-10 mg/m2 daily for 7 days q 4 wk) (iClb-R) in combination with rituximab (375 mg/m2/cycle for 8 cycles) in previously untreated CLL patients. Thirtysix patients received cHD-Clb-R and 32 iClb-R. Median age was 66 years (range 41-80); 24 were women and 44 men; 24 had Binet stage A, 27 B and 17 C; 5 had del(17p). Most common severe adverse events were granulocytopenia, occurring in 14; and infections in 7 patients, one of whom died. One patient stopped treatment due to hepatotoxicity. Both schedules resulted in similar toxicity and efficacy (cHD-Clb-R vs. iClb-R overall survival, progression-free survival and survival without next treatment at 30 mo. 70% vs. 83%, 49% vs. 55% and 67% vs. 75% respectively). Combinations of rituximab and chlorambucil are well tolerated and effective treatments for patients ineligible for fludarabine-based regimens. Outcomes seem to be related more to total drug doses than schedules.

Chlorambucil (Clb), an oral alkylating agent, was the mainstay of B-chronic lymphocytic leukemija (CLL) treatments from the fifties. It lost popularity to fludarabine in the nineties, only to resurface as the best chemotherapy option for elderly and unfit, which comprise the majority of CLL patients, after a study showed that patients over 70 had better overall survival (OS) if treated with Clb than fludarabine, despite inferior disease control [1, 2]. Although it has been used for years, there is still no consensus regarding its dose and schedule. Published regimens vary from 0.4 mg/kg q 4 wk (used in the USA) to 2 mg/kg q 2 wk (used in Germany) to 8-10 mg/m2 daily for 7 days q 4 wk (used in Britain) to 8-10 mg/m2 daily until response or toxicity (used in EORTC and IGCI studies) [1, 3]. The latter schedule was at one time described as the most effective chemotherapy regimen for CLL but failed to gain acceptance in the USA and West Europe and remains rarely used outside of centers that participated in the original trials. Toxicity of Clb, even when administered at 20 mg daily for weeks, is generally mild, mostly hematological [4]. Nausea and vomiting are more frequent in regimens where the drug is administered in very high doses every two or four weeks [5]. CLL cells are CD20 positive but combinations of rituximab and chemotherapy became standard treatment later than in lymphomas. This was due to two causes.

First, early experience was that cytokine release syndrome can be fatal in CLL patients with high circulating tumor burden. Second, rituximab monotherapy was substantially less effective in CLL than in follicular lymphoma. Since a study showed that efficacy of rituximab monotherapy can be improved by increasing its dose investigators from MD Anderson chose to modify rituximab dosing in their combination of fludarabine, cyclophosphamide and rituximab (FCR) that became the gold standard for treating fit CLL patients [6, 7]. This then became the standard schedule of rituximab dosage for CLL: 375 mg/m2 1st cycle, 500 mg/m2 cycles 2-6. Interestingly, the total dose of rituximab administered with this schedule is slightly less than in the standard lymphoma schedule of 375 mg/m2/cycle for 8 cycles (2875 mg/m2 vs. 3000 mg/m2) [8-10].

The addition of rituximab to Clb has been studied in two major randomized trials, the CLL 11 study run by the German CLL Study group and the British NCRI study [11-14]. Both showed a clear superiority of the combination without significantly increased toxicity. However, schedules of Clb in the two studies varied substantially, and so did the outcomes of patients receiving R-Clb. It remains unclear whether these two facts are related. Before the introduction of rituximab for this indication, two schedules of Clb were used in Croatia: the intermittent 7 days q 4 wk and the continuous high-dose schedule. When it became clear that rituximab improves outcomes of CLL patients, hematologists combined it with the Clb regimen they usually used. Due to reimbursement reasons, rituximab was administered at a dose of 375 mg/m2/cycle for 8 cycles. KroHem, the Croatian Cooperative Group for Hematologic Diseases performed this retrospective study to analyze the outcomes of patients with CLL who received different Clb and rituximab combinations as front-line treatment.

Data were collected by retrospective chart review. Patients were included in this analysis if they had CLL diagnosed by standard criteria, were in need of therapy, received Clb and rituximab with or without steroids for front-line treatment and had sufficient data available in their files for analysis, including CT scans for determination of lymph node and spleen size prior to and at the end of treatment.

OS, PFS and TTNT were estimated using the method of Kaplan & Meier. Fisher’s exact test was used for 2x2 table analyses and log-rank test for survival comparisons. The assumed level of significance was 0.05.

This is a non-interventional retrospective study of patient data performed with the approval of the Ethical Committee of the Medical School, University of Zagreb in accordance with pertinent Croatian, EU and international rules and regulations and the Declaration of Helsinki. Prior to treatment all patients gave informed consent for therapy.

We identified 68 patients fulfilling these criteria, 24 women and 44 men whose median age was 66 years. Patients' characteristics are presented in Table 1. Seventeen patients had advanced stage disease (Binet C/Rai 3-4) and 5 patients had the presence of del(17p).

Response rate was 86% in the cHD-Clb-R and 88% in the iClb-R group; 20 out of 36 and 16 out of 32 obtained hCR at time of end of treatment evaluation in each group respectively. After a median follow-up of survivors of 30 months 25 patients in the cHD-Clb-R group are alive, 17 of them without new treatment and 11 without progression. In the iClb-R group 28 patients are alive, 17 of them without new treatment patients and 17 without progression. There was no significant difference in efficacy between these two groups (cHD-Clb-R vs. iClb-R) regardless of the treatment schedule in all measured outcomes: OS at 30 months was 70% vs. 83%, PFS 49% vs. 55% and TTNT 67% vs. 75% respectively (Figure 1). Unfavorable prognostic factors were advanced stage (Binet C, Rai 3-4), presence of del 17p, high beta-2 microglobulin levels and age (data not shown).

The toxicity profile was relatively favorable. Most common adverse events (AE) were nausea and a mild skin rash, observed in 50% of patients. Gastrointestinal toxicity manifested by vomiting and nausea was more common in patients receiving intermittent Clb. Hematologic toxicity was similar in both groups. Severe granulocytopenia (grade 3 or 4) occurred in 14 patients while infections were observed in 7 patients. Most frequent infectious complications were upper respiratory tract infections and pneumonia, while one patient in the iClb-R group died of invasive pulmonary mycosis. One additional patient stopped treatment due to hepatotoxicity. Allergic reactions, mainly cutaneous, were seen in six patients, while one patient developed a serious infusion reaction related to rituximab administration. 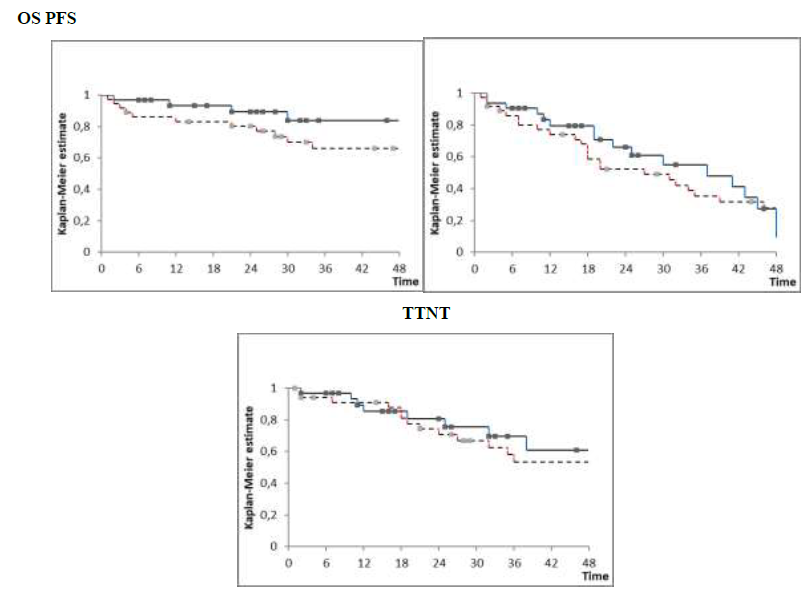 Chlorambucil has been given in a variety of doses and schedules for the treatment of elderly patients with CLL and comorbidities. Jaksic and Brugiatelli first described the high-dose continuous chlorambucil regimen in 1988 and demonstrated the practicability of dose escalation of chlorambucil in treatment of CLL patients [17]. Studies have shown higher ORR for high-dose chlorambucil versus low-dose (ORR: 420 mg per 28-day cycle, 90% v 70 mg/m2 per 28-day cycle, 72%) [18, 19]. Although high-dose therapy is more effective and associated with better response, it comes at the expense of increased myelosuppression and incidence of infections, particularly in older and more fragile patients. Regardless, one of the advantages of chlorambucil is a well-established toxicity profile with good tolerance, even in this patient population. Another benefit is its low cost. One of the primary disadvantages of chlorambucil therapy is a low CR rate, even in treatment-naive patients. A pivotal phase 3 trial by the GCLLSG demonstrated that the addition of rituximab to chlorambucil in elderly patients with CLL prolongs PFS (16 months vs. 11 months) and doubles the overall response rate, without increasing the rates of infection [14]. Results from CLL11 study also confirm that the addition of anti-CD20 monoclonal antibody to Clb in this population of patients results in substantial TTNT and OS benefit compared with Clb alone [11-13].

Our results seem superior to the German CLL Study Group CLL11 study (ORR 87% vrs 65.9%, PFS 30 vrs 15.7 mo) and similar to the British NCRI study (ORR 84%, PFS 23.5 mo). This is most probably due to the low dose of chlorambucil used in the CLL11 study (0.5 mg/kg body weight p.o., day 1 and 15 in 6 cycles) [13-14]. For reimbursement reasons, we were unable to use the standard rituximab CLL schedule of 500 mg/m2 in cycles 2-6 but administered 8 instead of 6 cycles. Therefore our patients received a slightly higher total dose of rituximab (3000 mg/m2 vs. 2875 mg/m2). It seems that this change in schedule did not affect outcomes adversely. Frontline treatment for CLL has evolved in the last few years with rapid approvals of several novel targeted agents. Even though latest clinical trial results have established ibrutinib and venetoclax with or without anti-CD20 antibodies (rituximab, obinutuzumab) as the preferred first –line treatment for most CLL patients we think that our data is nonetheless interesting and shows that chlorambucil continues to be a valid alternative in unfit patients [20]. In conclusion, our study confirms that combinations of rituximab and high-dose chlorambucil are well tolerated and effective treatments for patients ineligible for fludarabine-based regimens. Outcomes seem to be related more to total drug doses than schedules.