Lung cancer is the third most common cancer accounting for 13% of all cancers and the number one cause of cancer deaths (22% of the total cancer deaths) [1]. The overall five-year survival rate is less than 20% [2], reflecting the advanced stage at diagnosis in majority of patients. However, even among early stage cancers, outcomes vary regardless of Tumor Node Metastasis (TNM) stage, with 5-year survival between 58%-83% at best [3]. A five-gene signature has been shown to be an independent predictor of relapse-free and overall survival among NSCLC patients [4]. However, these molecular assays are not readily avialable and are more labor intensive and expensive. Immunohistochemical analyses (IHC) is the most practical method for assessing change in protein expression and perhaps the most readily adaptable technique to clinical practice. It is critical to identify biomarkers using easily available and reproducible assays to improve risk-stratification in lung cancers that facilitate decision making for adjuvant therapy.

Galectin-3 (gal-3) is a beta-galactoside binding protein expressed by various cells including epithelial, neural, and inflammatory cells [5]. It plays an important role in cell-cell and cell-matrix interactions. Preclinical cancer models have shown gal-3 to be associated with tumor cell transformation, apoptosis, adhesion, invasive behavior, and metastasis [5-7]. Gal-3 is overexpressed in several malignancies, including gastric, breast, thyroid and colon cancers, however, higher gal-3 was associated with poorer outcome in colon cancer while better outcome was noted in gastric cancer [8-12]. Gal-3 was found to be overexpressed in non-small cell lung carcinomas, and its expression correlated with tumor progression in preclinical model [13],  suggesting its important role in lung cancer development and metastasis. However, gal-3 expression profile varies among different types of lung cancer. For example, small cell lung cancer (SCLC) expresses gal-3 gene at very low levels or not at all, while non-small cell lung cancer (NSCLC) expresses high levels of gal-3 [14]. Previous study reported predictive relation between gal-3 expression and disease recurrence in relatively small number of patients with NSCLC [15]. NSCLC encompasses two major lung cancer types, including adenocarcinoma and squamous cell carcinoma. A recent study showed inhibition of tumor growth by gal-3 inhibitor in a preclinical model of lung adenocarcinoma [16]. Gal-3 expression profile and its clinical implication specifically in squamous cell carcinoma has not been examined.

The Roswell Park Cancer Institute Institutional Review Board (IRB) approved this retrospective project in compliance with federal, state, and local requirements. Two hundred thirty-six patients diagnosed with squamous cell carcinoma of lung, from 1994 to 2011, who had sufficient tissue for tissue microarray, were included in the analysis. Tumor specimens and matched normal lung tissue were collected from patients who underwent surgical resection of lung cancer at Roswell Park Cancer Institute (RPCI), Buffalo, NY. Patients with adenocarcinoma, carcinoid, large cell, and large cell neuroendocrine carcinoma were excluded from this study. All clinical and outcome data were de-identified.

The immunohistochemical staining was performed with gal-3 antibody (Abcam). For antigen retrieval, slides were heated in the microwave for 10 minutes in citrate buffer (pH 6.0), followed by a 15-minute cooling period. Endogenous peroxidase was quenched with aqueous 3% H2O2 for 10 minutes and washed with 1xPBS using 0.5% Tween 20 solution. Slides were loaded on a DAKO auto Stainer and blocked with serum-free protein block solution (Dako #X0909) for five minutes and then probed with Gal-3 primary antibody (Abcam) for one hour, followed by the biotinylated goat anti-mouse IgG (Jackson Immuno Research Labs, #115-065-062) for 30 minutes, then by the Elite ABC Kit (Vectastain, #PK-6200) for 30 minutes, and the DAB chromogen (Dako, #K4007) for five minutes. The slides were counterstained with hematoxylin.

Patient characteristics were summarized by gal-3 expression using the mean, median, and standard deviation for continuous variables, and frequencies and relative frequencies for categorical variables. Comparisons were made using the Kruskal-Wallis and Fisher’s exact tests, as appropriate. Overall and recurrence-free survivals were summarized by galectin-3 expression using standard Kaplan-Meier methods, with comparisons made using the log-rank test.

Overall and recurrence-free survivals were summarized in the overall sample using standard Kaplan-Meier methods. The association between survival outcomes and patient demographic/clinical characteristics were evaluated using univariate and multivariate Cox regression models. Time-dependent ROC curves were used to evaluate the association between galectin-3 expression and survival outcomes; where, for each time-point, the AUC(t) and sensitivity/specificity correspond to the Youden’s index were obtained. These values were plotted over time and reflect the prognostic ability of galectin-3 expression. A similar analysis was conducted using the multivariate models. All analyses were conducted in SAs v9.4 (Cary, NC) at a significance level of 0.05.

There was a total of 248 patient samples included in the TMA, of which 236 met the criteria for analyses, including squamous cell histology and gal-3 levels available. Table 1 summarizes the clinical and pathologic characteristics of patients whose tumor specimen were utilized for this study. The median age of all patients at diagnosis was 69 years (range 39 to 86 years). There were 138 (63%) cases of stage I, 56 (26%) cases of stage II and 25 (11%) cases of stage III and IV disease in this cohort. Disease stage was not recorded for remaining 17 cases. Median follow-up duration was 76 months (range 1 to 175 months).

Multivariate analyses showed a significant association between age at diagnosis and overall survival with lower survival among patients diagnosed at or after the age of 65 (hazard ratio, 1.67; p =0.01). Similarly, recurrence free survival was significantly lower in patients who were diagnosed at >= 65 years of age (hazard ratio 1.69; p = 0.009). Both overall survival and recurrence free survival correlated with pathological grade and stage with lower survival in grade III and stage III/IV patients, respectively (Table 1). There was no difference in survival outcome in relation to gender and race. The male to female ratio was 1.17 (129 male, 107 female). Majority (92%) identified themselves as white. Forty five percent of patients were current smokers, 51% were former smokers and 4% were never smokers.

Gal-3 staining was diffuse and predominantly cytoplasmic in distribution. Gal-3 expression level was low in 17%, moderate in 67%, and high in 16% of lung tumors (Table 1). Median gal-3 score was 2. In normal lung, most of the pneumocytes did not express gal-3, but alveolar macrophages show moderate to strong staining for galectin-3. Figure 1 shows a representative image of the range of Gal-3 staining intensity. 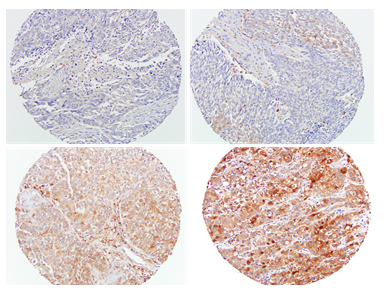 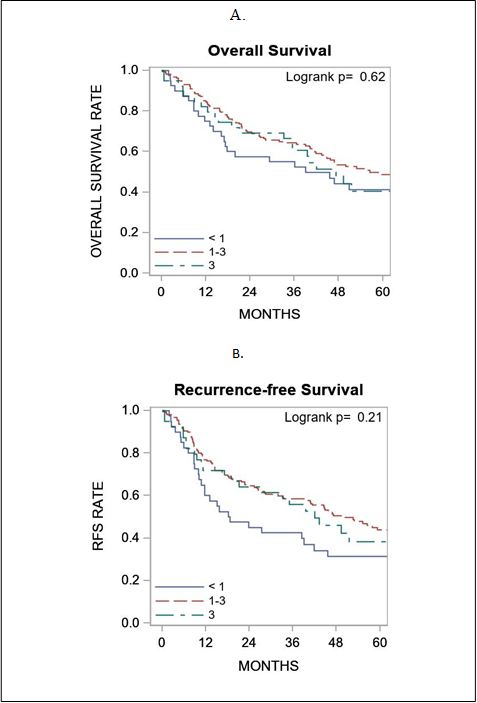 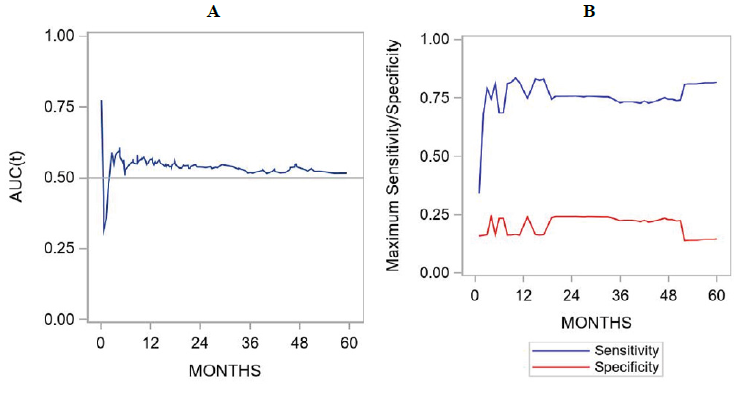 Figure 3: Time-dependent ROC curves showing the association between galectin expression and survival outcomes.  For each time-point, the AUC(t) is depicted in panel A and sensitivity/specificity correspond to the Youden’s index are shown in panel B. These figures represent results derived from univariate analyses.

3.3 Gal-3 expression in relation to other patient characteristics

Using average gal-3 intensity score, correlation between gal-3 expression and several patient characteristics were analyzed. Gal-3 score was low in 40 patients (17%), moderate in 157 (66.5%) patients, and high in 39 (16.5%) patients. Univariate comparison of gal-3 scores as a continuous variable showed a significant difference in gal-3 expression and nodal metastasis as well as tumor stage with higher expression in advanced stage disease. There was no significant correlation with other clinicopathological variables, including age, gender, smoking status, and histologic grades (Table 1).

Gal-3 is a beta galactoside lectin protein of approximately 30 kDa size, composed of three domains: NH2 terminal domain (decides specific cellular targets), repetitive amino acid residues (serve as a substrate for matrix metalloproteinases) and a carboxyl terminal domain that contains carbohydrate-recognition domain (CRD) [17]. Galectins can be expressed in nucleus or cytoplasm and are secreted from cells into the extracellular matrix. Gal-3 has been implicated in various biological functions including cell-cell interactions. Gal-3 has been detected in various normal organs and tissues including colon, brain, ovary, stomach, liver, skin, capillary endothelium, and inflammatory cells [6, 17].

Several studies have examined gal-3 expression in various cancers and its value in determining the prognosis [1,12, 18]. Gal-3 overexpression is associated with an increased invasiveness of various types of tumor cells such as pheochromocytoma, ovarian, melanoma, thyroid and colorectal cancer cells [19]. It has been shown that overexpression of gal-3 enhances tumor cell adhesion to extracellular matrix (ECM) by its interaction with ECM glycoproteins such as fibronectins, collagen IV, elastin, and laminin and promotes the escape of tumor cells from the primary tumor sites [5, 7]. Nuclear galectin-3 can regulate β-catenin signaling pathway and enhance cyclin D1 and c-MYC expression and promote cell cycle progression in cancer cells [20]. Cytoplasmic gal-3, on the other hand, can interact with the activated GTP-bound K-Ras and cause constitutive activation of Ras-dependent PI3K and Raf-1 activation [21]. In our study, gal-3 expression was found predominantly in cytoplasmic distribution but a small subset of tumor showed both nuclear and cytoplasmic positivity. This supports the role of gal-3 in oncogenic potential. Earlier studies revealed that circulating gal-3 may play an important role in tumor metastases [22]. The level of circulating gal-3 is significantly higher in the bloodstream of cancer patients in particular those with metastasis compared to healthy people [23]. Higher level of circulating galectin-3 is associated with increased metastasis and poor prognosis in several types of cancers including colorectal, thyroid and ovarian cancer [7]. We studied relationship between nodal metastases and gal-3 levels. Gal-3 expression was associated with increased incidence of nodal disease in this cohort.

Castronovo et al. reported down regulation of gal-3 in cancers including colon, breast, ovary and endometrium compared to normal corresponding tissue [18]. However, other studies have shown overexpression of galectin-3 in colon and thyroid carcinomas [12]. Studies have also shown cytoplasmic expression in tongue and prostate carcinoma is associated with worse prognosis [24, 25]. Increased cytoplasmic expression has been reported in advanced stage of colon carcinoma and a correlation between high gal-3 expression in colorectal cancer and cancer progression, liver metastasis, and shorter disease-free survival rates has also been reported [12].

Higher level expression of gal-3 has been reported in non-small cell lung carcinomas using immunohistochemistry and RT-PCR technique [13, 14, 26]. Earlier studies published from Japan also reported predictive value of gal-3 expression in NSCLC recurrence [15]. This study used all subtypes of non-small cell lung carcinoma, including adenocarcinoma, squamous cell carcinoma, and large cell carcinoma in their cohort. We selectively utilized lung carcinoma with squamous cell histology in our analyses. Our results showed that higher gal-3 expression is not directly associated with recurrence free and overall survival in this cohort of patients.

Limitations of our study include the use of TMA, which could account for results in discrepant results with whole tissue section due to the heterogeneity in gal-3 staining pattern within the same tumor. Additionally, we did not evaluate normal bronchial epithelium for gal-3 expression which could be impacted by cigarette smoking and potentially may have prognostic relation on risk of cancer recurrence. Additionally, there might be other confounding variables present in Asian patients that might explain the discrepant prognostic impact of gal-3 expression in this cohort of predominantly Caucasian population. The genomic changes found in NSCLC from Asian patients have a different profile from those found in patients from Western countries, even after controlling for histologic subtype [27]. These differences need to be studied in future investigations regarding the impact of gal-3 expression and lung cancer prognosis.