Context: The koura-koura production technology is know-how transmitted from generation to generation and goes through several stages.

Methods: Investigations with 15 female producers have allowed the implementation of variants of the production technology.

Conclusion: The variants of the koura-koura production technology allow several production diagrams with variations in the finished product.

Peanuts are oilseed that is grown in all tropical and subtropical regions of the world [1]. It is produced mainly in Asia, Africa, and the Americas. Global production of shelled groundnut amounted to more than 47 million tons in 2017 and Africa is the second-largest producer with 13.94% of global production [2]. In Burkina Faso peanut is the second largest cash crop and its production was 328778 tons in 2018 [3]. It occupies an important place in society and contributes significantly to Gross Domestic Product (GDP) and household agricultural income. The sector contributes annually to nearly 1.45% of GDP [4]. Peanuts also provide households with 8.8% of total agricultural income and nearly 16% of agricultural monetary income [5]. Peanuts are consumed in several forms: as raw, boiled, or roasted seeds, or in more or less elaborate forms such as butter, dough, flour, and pancakes in Burkina Faso. Peanut processing is a substantial income-generating activity for women [6]. Peanut pancakes (koura-koura) are produced artisanally by women and the production technology differs from one locality to another. Knowledge of these technological variants would allow a better valorization of the koura-koura.

The information collected from the producers was converted into diagram form on the Word software.

Technological investigations with the women producers have made it possible to establish production diagrams. The unit operations of koura-koura production are identical, with however variations according to the production stages (Figures 1- 3). 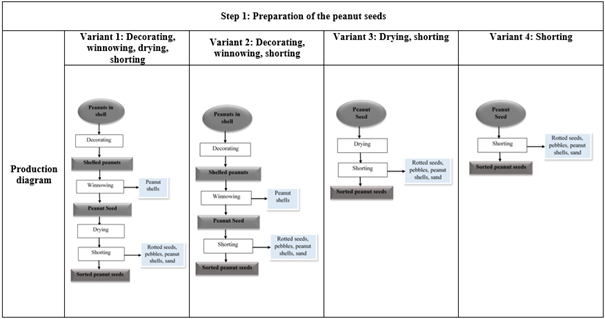 Figure 1: Preparation of the peanut seeds.

Figure 2: Production of the peanut paste. 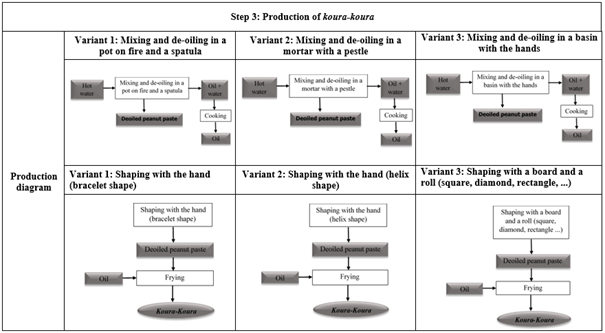 A combination of the best variants of each step was used to create a diagram (Figure 4). This diagram took into account the production time and the sanitary quality. 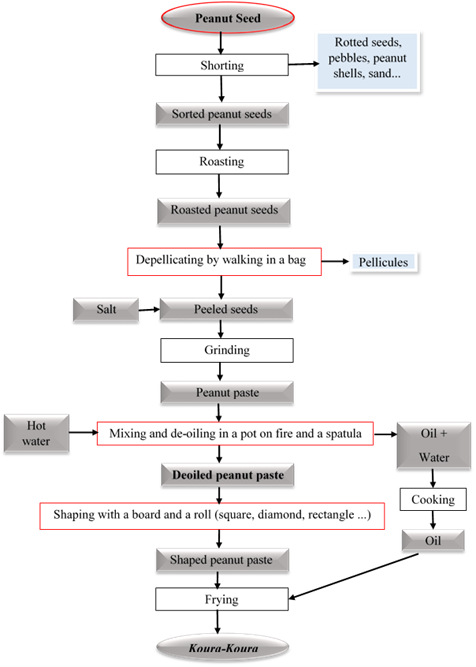 There are four variations in the preparation of the raw material. The first and the second include the hulling stage to obtain the peanut seeds. In the third and fourth variants, the producers pay directly for the already shelled seeds. The first and the third variant contain a step of drying the peanut seeds. In all the variants, the preparation of the raw material consists of cleaning the peanut seeds to remove all impurities and the cleaning is done in 2 steps. The first step consists of sorting rotten and/or moldy peanut seeds, stones, and other solid waste from high masses. The second step is winnowing the seeds to remove small peanut shells, sand, straw, and other low mass solid wastes. The preparation of peanut seeds is a very important step in the koura-koura production process. It reduces the microbial load by sorting out impurities and rotten seeds and reduces the concentration of aflatoxins by removing moldy seeds. The successful completion of this step will have an impact on the finished product. Indeed, the preparation of the seeds will allow having a finished product without sand and better sanitary quality. Seeds that have already been shelled and no longer dry before roasting [6,7]. However the peanut seeds were roasted before sorting them [8]. This may make sorting difficult and inefficient. Indeed the roasted seeds take on a dark color and make it difficult to differentiate between rotten seeds which are usually dark.

After roasting, the seeds are cooled by spreading them on a plastic bag and removing their skins. There are two variants of depellicating. In the first variant, depellicating consists of cooling the seeds on a plastic bag and pressing them lightly with a grindstone-shaped wood to separate the seeds from the skins. In the second variant, depellicating consists of cooling the peanut seeds on a plastic bag, placing them in a jute bag and trampling the bag to separate the seeds from the skins. Depellicating was performed by pressing the peanut seeds onto a plate with a wood. In both variants, the dehulled seeds are winnowed with a plate to separate the seeds from the husks. The process of depellicating step cannot seen in kluiklui production flow chart and this could influence the quality of the final product. Indeed, this step contributes to the improvement of the organoleptic and sanitary quality of koura-koura by removing the film. After removal of the husk, the peanut seeds with added salt are crushed into fine particles to obtain a fairly thick paste.

The paste obtained undergoes a de-oiling process which consists of separating the oil from the peanut cake. There are three variants of de-oiling. The first consists of putting the peanut paste on low heat in a pot and adding hot water while stirring it with a spatula. The second is to put the peanut paste in a mortar and grind it while adding hot water. The third variation is to put the peanut paste in a bowl and knead it with your hands while adding hot water. The mechanical action associated with heat allows the separation of the miscible (oil+water) from the cake. After separation of the oil from the cake, the miscible is recovered in a pot with a ladle, then heated to evaporate the water and leave the oil. Part of this oil is used to fry the cakes and the other part is sold. Authors [9] do the de-oiling by putting the peanut paste in a basin, kneading it with the hands, and then pressing the paste on a table to separate it from the oil. The cake is then shaped into different shapes according to the variants. For the first and the second variant, the shaping is done manually on an inclined board (for the first) or a plate (for the second) to facilitate the flow of the miscible remaining in the dough. For the third variant, shaping is done by spreading the cake on a board and spreading it with a rolling pin. Different shapes are then cut (square, rectangle, diamond...) with a knife. According to [11] kluiklui is marketed in Benin, particularly in the North (commune of Djougou) where they take the form of cakes, and in the South-East in the Mono (communes of Lokossa and Dogbo) where they take the form of circles or snails. The shaped cakes are put in hot oil to be fried. The cakes are ready when they take on a golden color and rise to the surface of the oil. The patties are drained and cooled after frying.

The use of shelled peanut kernels considerably reduces production time. However, it slightly increases the cost of production. Indeed, in West Africa, the price of shelled groundnut varied from 324 to 417 F CFA/kg against 508 to 576 F CFA/kg for shelled groundnut [12]. The drying step before sorting makes the process long and unnecessary. Indeed, roasting in addition to facilitating depellicating and increasing the sensory quality of the peanut seeds reduces their moisture content. It consists of subjecting peanut seeds to a high temperature ranging from 140 °C to 180 °C in a short time [13]. Removal of supprimed peanut seeds from the bag by trampling is faster than rubbing them with wood. It also avoids contact with hands and thus reduces microbiological contamination. De-oiling in a pot over low heat with a spatula reduces the microbial load in koura-koura. Indeed the use of hot water and the heat of the fire allow a reduction of the microbial load. This has reduced the total mesophilic flora from 4.19x105 (peanut paste) to 4.10x105 (de-oiled peanut paste) [14]. Also, this variant is the safest compared to the other two. Indeed, when peanut paste is plundered in the mortar with hot water, there may be splashes that could burn the producer. Also when kneading with the hands these can be burned with the hot water used for de-oiling. The use of the board and the rolling pin for shaping avoid microbiological contamination. The hand is the most important vehicle for the transfer of microorganisms from feces, nose, and skin to food [15]. However, this technique makes it possible to have new forms of koura-koura. This variant may not be readily accepted compared to traditional hand-made variants.

Authors thank their Laboratory (LaBIA), the local direction of scholarship (National Center for Information, School and Professional Orientation and Scholarships of Burkina Faso), and the women who were interviewed in this study for the time.

No conflicts of interest have been registered on this work to the best of our knowledge.