Multiple myeloma (MM) is a malign hematologic disorder characterized by malign proliferation of plasma cells. Bone marrow examination are necessary for diagnosis, management of disease and prognosis. There are many case of literature related that amounts and morphology of cells in bone marrow biopsy and bone marrow aspiration have an impact on survival, classification and critical management of disease. We presented a rare case of myeloma with plasma cells clustered in the bone marrow aspiration.

Multiple myeloma (MM) is a plasma cells dyscrasia. There are also multiple myeloma varieties that do not produce monoclonal immunoglobulins, although ?t is characterized by a proliferation of monoclonal immunoglobulin producing plasma cells. It is more frequently seen in men between sixth and seventh decades of life. Disease occurs in many ways such as persistent pain in bone, fewer, fatigue, renal dysfunction, hypercalcemia or rarely with primary systemic amyloidosis. Osteolytic lesions osteopenia, and/or skeletal complications could be seen up to 80% of patients because of the neoplastic plasma cells which proliferate in the bone marrow [1]. MM diagnose is often suspected. Monoclonal protein in blood or urine important for diagnose. Bone pain or lytic lesions, although low serum albumin level increased serum total protein, unexplained anemia, symptomatic or non-symptomatic hypercalcemia or acute renal failure could be symptoms [2]. Amyloidosis is a rare disease which consist of primary, secondary and fam?l?al amyloidosis. Primary systemic amyloidosis (AL amyloidosis) always associated with plasma cell dyscrasia. Amyloid deposition localized multiple organs which contains like heart, kidneys, lung, tongue, sal?vary gland, skin, periart?cular tissue. Multiple myleoma is a common cause of amyloidosis. In this case, our patient presented specific cardiac amyloidosis and proteinuria depended on renal involvement.

When clinical suspect occur, the most important step is prove the clonal bone marrow plasma cells ?10 percent or biopsy-proven bony or soft tissue plasmacytoma [3]. In the bone marrow aspiration, plasma cells can be seen in mature, immature, anaplastic forms and in various morphological forms. Our patient was diagnosed with cardiac amyloidosis while investigating the etiology of pleural effusion. Also suspected renal involvement in the patient with proteinuria. In this report we present a case of different presentation of multiple myeloma. We underline interesting, grouped plasma cells in bone marrow aspiration [Figure 1]. 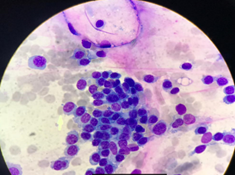 A 60 years old male patient presented with dyspnea. In the detailed system inquiries, there are inappetence and 10 weight loss in 3 months. Physical examination revealed cachectic and pale appearance. Also bilateral lung basal sounds decreased and pretibial edema was present in both legs. Bilateral pleural effusion, anemia and 4, 5 gr proteinuria in the spot urine was detected. Samples were taken from the pleural effusion and evaluated as borderline transudate and suspicious malign cytology. At the same time, echocardiography was planned and cardiac amyloidosis image taken. Then with the clinical suspect of MM either, the immunofixation of the serum and 24 hour urine were studied and or bone marrow aspiration and biopsy was planned. In the bone marrow aspiration was interesting about its clustering plasma cells view.

The amount of plasma cells in the bone marrow in multiple myeloma ranges from 10% to 90%. The morphology of these cells is also different. Plasma cells can be mature morphology or intermediate, immature or plasmablastic variant. This is important for the stage and management of the disease. There are multiple cases of myeloma wh?ch containing plasma cells showing several different morphologies such as Auer rod like inclusions [4], intracytoplasmic p?nk inclusions [5], spindle shaped cells. But there is no publication on clustered positioning of plasma cells in multiple myeloma and the prognost?c value of this morphologic var?ant is currently unclear. Unfortunately the patient of our case died one week after diagnosis. Therefore we could not monitor and treat the patient and observe the response to treatment. In this report, we wanted to remind different forms of clinical presentation of multiple myeloma and to draw attention to grouped plasma cells in bone marrow aspiration.