BCR pathway inhibitors idelalisib and ibrutinib were the first small molecule targeted agents for B-cell malignancies. In spite of encouraging response rates in various forms of B cell diseases, patients will eventually develop relapse due to the emergence of resistant cells. To better identify the possible mechanisms of resistance we developed and characterized idelalisib- and ibrutinib-resistant variants of the human non Hodgkin’s lymphoma cell lines DoHH2 and Daudi. These resistant variants displayed a cross-resistance profile limited to PI3K inhibitors, BTK inhibitors and a SYK inhibitor but not to unrelated agents. A number of alterations were observed in the resistant lines, including a strong reduction of BLINK and the AKT3. A new SNP in PLCgamma2 (Leu848Phe) closely related to a previously reported SNP associated to ibrutinib resistance (Leu845Phe) was observed in both DAUDI-based resistant cell lines but was absent in wild type cells. Resistant lines tended to express larger amounts of CD38 and were found to display enhanced sensitivity to anti-CD38 antibodies. These results identify potential novel mechanisms of resistance to idelalisib and ibrutinib and raise the possibility that cells resistant to BCR pathway inhibitors might possess enhanced sensitivity to anti-CD38 antibodies.

The introduction of small molecule kinase inhibitors has deeply modified the treatment of patients with lymphoproliferative diseases [1]. Idelalisib, an oral reversible phosphoinositide-3 kinase (PI3K) p110δ inhibitor and ibrutinib, an oral irreversible inhibitor of Bruton’s Tyrosine Kinase (BTK) are both approved in certain indications of lymphoid malignancies [2]. Despite the initial efficacy of these drugs in a majority of cases, some patients relapse during treatment or fail to respond to single agent therapy, prompting the development of combination regimens [3, 4]. It is therefore necessary to better understand mechanisms of resistance to these agents [5].

Resistance to small molecule targeted therapies is commonly due to alterations in the target molecule. Resistance mechanisms for the Bruton's tyrosine kinase inhibitor ibrutinib have been reported to involve mutations of the binding site of ibrubinib to BTK, potential gain of function mutations of PLCgamma2 and activation of MYC [6, 7]. In the case of chronic lymphocytic leukemia (CLL) patients treated with ibrutinib acquired mutations of BTK or PLCG2 were found in up to 85% (95% CI, 71% to 94%) of CLL patients who relapsed under therapy [8]. SWI-SNF mutations have been shown to mediate resistance to ibrutinib and venetoclax in mantle cells lymphoma [9]. Resistance to idelalisib has been linked to PIK3 and Myc amplification [10].

Total RNA was extracted from cell suspensions and 2 µg of mRNA was reverse transcribed. PCR was performed on LC480 LightCycler® Nano in triplicate. Data were calculated using the ?Ct method with ribosomal 28S RNA as endogenous control.

Poly-A enriched and directional mRNA libraries were prepared from total RNA (NEXTflex Rapid Directional mRNA-Seq Kit, BiooScientific). Pair-end reads were generated (Illumina NextSeq 500) generating 75bp pair-end read per sample. Reads were mapped against human genome (hg19) using tophat2 (v2.1.0). For expression analysis FPKM (Fragment Per Kilobase Million) values were computed at the transcript level using cufflinks (v2.1.1) based on Refseq annotation and differential expression was considered with at least a 2-fold-change. SNP variants were called using samtools mpileup and bcftools. The defined BCR pathway from KEGG database was used to focus more specifically on SNP in genes involved in BCR pathway. SNPs on those genes were manually analysed using VarSome platform (varso.me) if changes between WT and treated cell lines were based on at high quality coverage (base quality above Q30).

Resistance to therapy is usually multifactorial. Yahiaoui analysed the mechanisms of acquired resistance to BCR inhibitors in the TMD8 line and reported a loss of phosphatase and tensin homolog associated with an enhanced phosphoinositide 3-kinase pathway upregulation, but no mutation of PIK3CD while acquired resistance to Bruton's tyrosine kinase inhibitor was associated with a novel tumor necrosis factor alpha induced protein 3 mutation (TNFAIP3 Q143*), increased p-IκBα and a mutation in Bruton's tyrosine kinase at C481F [12]. Cao et al. reported that the WHIM-like CXCR4(S338X) somatic mutation activates AKT and ERK, and promotes resistance to ibrutinib [13]. Iyengar et al. have shown that P110α-mediated constitutive PI3K signaling limits the efficacy of p110δ-selective inhibition in mantle cell lymphoma [14]. Kuo et al. [15] reported point mutations within the kinase PIM1 that reduce sensitivity to ibrutinib in ABC-DLBCL [15].

Remarkably our ibrutinib- and idelalisib-resistant variants displayed high levels of cross-resistance to BCR-pathway inhibitors but not to agents with unrelated mechanisms of action (Figure 1A). Variants were cross-resistant to the two PI3K inhibitors idelalisib and duvelisib, the two BTK inhibitors ibrutinib and tirabrutinib (ONO-4059) and the SYK inhibitor entospletinib but remained sensitive towards conventional cytotoxic agents as well as bortezomib and prednisone. Resistant Daudi variants displayed some level of resistance to navitoclax but not to venetoclax. These results suggest that alterations in the BCR signaling pathway are common events involved in the resistant phenotype of our variants. Alterations observed in all of the resistant models included increased expression of PI3KCG and a strong reduction of protein tyrosine phosphatases PTPN6 and PTPNPRO, protein tyrosine kinase Lyn and NFK-B interactors IKBKB and MALT1 (Figure 1B.) A remarkable alteration in BCR signaling was a significant decrease in the expression of BLNK in all the resistant models. Additionally Akt3 was identified by RNAseq as being strongly down-regulated in all of the resistant variants. This was further confirmed at the protein level (Figure 1C) while total AKT and Akt1 were present at similar contents in sensitive and resistant lines. Akt3 has been reported to suppress Aurora kinase induced apoptosis and conferred resistance to polo-like kinase inhibitors [16, 17]. Conversely Akt3 was found to be associated with slower disease progression in glioblastoma, as opposed to Akt1 and Akt2 [18]. Exposure of Waldenström’s cell lines to the AKT inhibitor MK2206 and ibrutinib was found to be synergistic [19]. 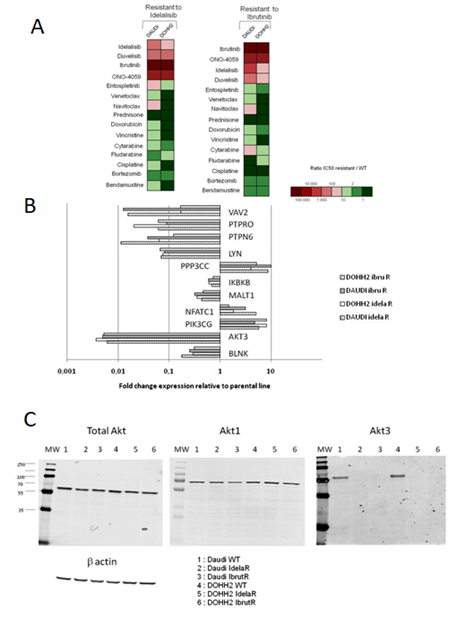 Fifteen SNPs with missense mutations were found on expressed genes involved in the BCR pathway (hsa05220), but no premature stop codon nor frameshift mutation in coding sequences were identified (Supplemental Table 1). SNPs previously reported on BTK and PLCgamma2 were not found in the resistant variants, despite the expression of concerned genes. Of note a new SNP in PLCgamma2 (Leu848Phe) closely related to a previously reported SNP associated to ibrutinib resistance (Leu845Phe) was present on half of expressed transcripts in both DAUDI-based resistant cell lines but was absent in wild type cells. The RNAseq expression analysis identified an upregulation of CD38 in DAUDI and DOHH2 cell lines resistant to idelalisib, a result confirmed by flow cytometry (Figure 2A). Variants were exposed to daratumumab and isatuximab and were found to undergo enhanced apoptosis in comparison to parental cells (Figure 2B). It would be worthwhile to determine whether the enhancement of CD38 is also observed in the tumor microenvironment since CD38 targeting has been proposed as a possible means to reduce local immunosuppression [20].

These in vitro models of resistance to BCR inhibitors suggest novel mechanisms of resistance and have identified enhanced CD38 expression as a possible therapeutic target to be explored and validated in patients with resistant disease. 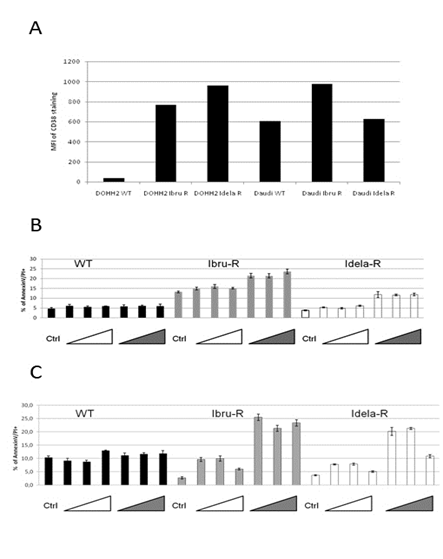 This work was supported in part by the LYRICAN grant (INCa_INSERM_DGOS_12563). The PhD fellowship of JF is co-founded by the DGA (Direction Générale de l’Armement) and Viroscan3D.

ELM, EB, EP, ZB and AC performed experiments. JF performed RNA seq analyses. LPJ and CD designed and interpreted the results. CD wrote the manuscript which was reviewed and validated by all co-authors.

Disclosure of Conflicts of Interest