Intracerebral epidermoid cysts are uncommon, accounting for only around 1.5 percent of intracranial tumors. Among these, Temporal lobe intracerebral epidermoid tumors are exceedingly rare. The great majority of these slow-growing tumors are asymptomatic, whereas few exhibit overt symptomatologies. We report a case of epidermoid tumors in a unique location, presented as a secondary complex partial seizure. A forty-year-old female presented with multiple episodes of convulsions followed by loss of consciousness for nine months, increasing in frequency over the last two months. MRI of the brain without contrast showed a well-circumscribed right temporal lobe mass, appearing hypointense on the T1 and hyperintense on the T2 sequence. In addition to our experience and review of existing literature demonstrate gross total resection of these lesions confers control of localization-related epilepsy.

Epidermoid cysts (EC) are slowly growing; benign tumors account for 0.3 to 1.8 percent of all brain tumors. They can be divided into four categories describing their anatomic sites: retro-sellar-cerebellopontine angle, parasellar-Sylvian fissure, suprasellar-chiasmatic, and basilar-posterior fossa. Among these, the retro-sellar-cerebellopontine angle is the most frequent location found in about 40 percent of cases [1]. They occur from the third to fifth weeks of gestation when the ectoderm and neuroectoderm fail to separate properly, resulting in ectodermal inclusions during gastrulation [2, 3]. Epidermoid cysts are usually benign and consist of a thin capsule of stratified keratinized squamous epithelium. Symptoms depend on tumor location, including dizziness, hearing loss, tinnitus, gait disruption, trigeminal neuralgia, diplopia, vision impairment, lethargy, and headache [3]. Rupture of an epidermoid cyst is a rare but severe complication that may lead to chemical meningitis and hydrocephalus. Epilepsy secondary to epidermoid cysts fairly uncommon manifestation. Here we report a case of the right temporal lobe epidermoid cyst, presented with seizure.

A 40 years old female presented with a history of multiple

episodes of convulsion for the last nine months; however, the first episode occurred while she was doing her household chores. First, she felt unwell, which was in the form of restlessness and eventually leading to a seizure followed by loss of consciousness for about 20-30 minutes. After she regained her consciousness, she remained confused for about 10-15 minutes. On query, she noticed a headache that was intermittent, global in distribution, mild in intensity, not associated with nausea or vomiting, no specific aggravating or relieving factor. However, headache preceded seizure during the last one and half months. There were no cognitive, motor, sensitivity, or coordination issues discovered during the neurological evaluation. MRI reveals an intra-axial mass located in the right anterior temporal region extending to the temporal pole and middle fossa dura downward, measuring about AP- 3.8 cm x CC- 4.1 cm x TD- 3.2 cm. The lesion is hypointense on T1WI, predominantly hyperintense on T2WI, diffusion restricted in DWI, medially the tumor is related with insular arteries, thin rim of grey matter surrounded laterally, medially and superiorly. There was slight ring enhancement, pre-operative radiological yields to some degree of a dilemma between epidermoid tumor and astrocytoma grade-II or III.

Surgery was performed through a right temporal craniotomy. Extradurally we reach the temporal pole. Then durotomy was done in a curvilinear fashion with reflected towards inferiorly. A thin cortical mantle was found over the cyst. An avascular intra-axial mass was exposed which was a pearly mass characteristic of an epidermoid cyst was encountered. The tumor was resected from the parenchyma without hampering the white matter, although in the medial aspect, some bits of tumor attached with M3 branches were left behind. The tumor contained cystic and solid portions, and the cystic content was viscid. The cystic lesion was filled with keratinized debris. No hair or obvious calcification or ossification was observed in the cyst. Post-operative recovery was uneventful. On the 3rd POD patient developed chemical meningitis and status epilepticus which was managed conservatively. At six months follow-up of the patient there were no neurological complaints and no signs of recurrence noticed. Histologically, the cyst wall was lined by stratified squamous epithelium and the cyst contained laminated layers of keratinized debris. No appendages of skin were present. The histopathological findings confirm the diagnosis of the epidermoid cyst. 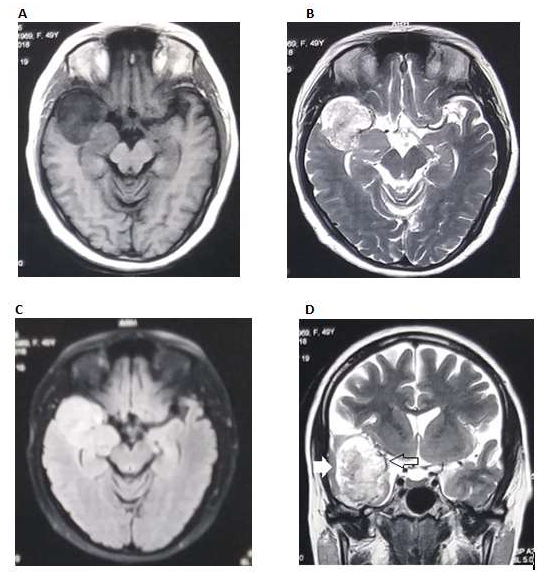 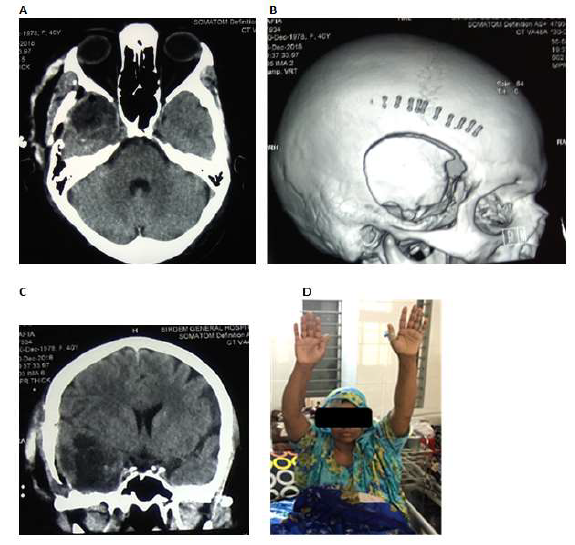 Epilepsy caused by EC is uncommon, and the epileptogenesis process is still unknown. It might results from cyst infiltration into the brain parenchyma, chemical meningitis, or a structural alteration in epileptogenic areas. Intracerebral epidermoid tumors are uncommon, accounting for around 1.5 percent of all epidermoid tumors [4]. The pathogenesis of intracerebral epidermoid tumors is still controversial, and many theories have been suggested [5, 6]. A subpopulation of cells derived from mesectoderm lines that give rise to the skin may move and become entangled within the primitive cerebral hemisphere as the neural tube closes. These trapped cells may develop and differentiate, resulting in an epidermoid tumor, or they may have less cell differentiation, leading to the formation of a dermoid tumor [7]. Epidermoid cysts are composed of an outer cystic capsule, a keratinized stratified squamous epithelial layer, and inner cystic contents that include tissue debris, keratin, water, and solid cholesterol [3, 8]. Clinical manifestations of the IECs depend on the size and locations of the tumors [9]. For example, IECs affecting the brainstem exhibit rapidly progressive clinical course [10, 11]. Common signs of IECs include convulsion, hemiparesis, cranial nerve palsy, abnormal gait, and also symptoms of raised intracranial pressure [9, 12]. In addition, patients can also demonstrate signs of meningitis due to rupture of cyst or leakage of cyst contents spontaneously [11]. In our case, we found only several episodes of complex partial seizure.

MRI imaging with DWI is beneficial in the preoperative diagnosis of the IECs. All the IECs in children are located in the brainstem [13]. The common differential diagnosis includes dermoid cysts, arachnoid cysts. The most common location of intracranial ECs is extra-axial, whereas some intra-axial epidermoid cysts were also reported in some literature. They named those “Intracerebral epidermoid cysts,” “Intraparenchymal epidermoid cysts,” or “Intra-axial epidermoid cysts” [8, 9, 13, 14]. MRI remains the primary imaging modality for the diagnosis of IECs. The signal intensity depends on the relative amount of lipid, cholesterol, and keratin within the lesion [10]. On MRI, IECs usually appear hypointense on T1WI and hyperintense on T2WI [14]. They typically do not have peritumoral edema on T2WI and post-contrast enhancement [10, 12]. While in some cases, contrast enhancement was observed peripherally [10, 14-16]. In our case, we observed T1 hypointense, T2 mixed intense, FLAIR hyperintense, diffusion restricted in DWI, mild contrast rim enhancement. Fluid-attenuated inversion-recovery sequence (FLAIR) was more sensitive than conventional sequences in differentiation epidermoid cysts from arachnoid cysts as the epidermoid cases display hyperintense signal CSF as detected in 8 cases and intermediate signal intensity in 2 cases [15, 17, 18]. In our case, we found hyperintense in the FLAIR sequence.

Although the malignant transformation of these lesions is extremely rare malignant melanoma within the temporal lobe epidermoid cyst has been reported [19, 20, 21]. The transformation could be explained by the presence of different cellular elements within the tumors, which arise from the same embryological origin of the neural crest. Some articles stated about the malignant transformation of epidermoid tumors into carcinoma. They recommended immediate post-operative MRI to evaluate the amount of resection and close clinical and image follow-up twice per year after surgery [22]. Subtle growth without clinical deterioration may be followed on a routine basis. In case of clinical deterioration, urgent new MRI should be performed to exclude malignant transformation and changes in size, followed by changes in signal, edema, and gadolinium enhancement must point toward a new surgical approach [22]. The patient were discharged with an antiepileptic drug. Upon our radiological and clinical follow-up over six months, the patient remained seizure-free. The optimal management of intraparenchymal epidermoid cysts removes cyst content with complete resection of the capsule [11, 23]. However, radical removal of the tumor capsule is challenging because of the strong adherence of the tumor capsule with surrounding brain parenchyma, especially in eloquent areas such as the brainstem [2, 23]. The primary concern following conservative resection is tumor recurrence. Zheng et al. found a recurrence rate of 44.4% in patients who underwent subtotal resection [13]. The pathogenesis of this tumor is closely associated with the embryological territory [24]. A better understanding of the pathophysiology will lead to more effective preventative interventions.

This case should alert clinicians to the differential diagnosis of intraparenchymal brain tumors. Gross total excision of the lesion may result in a better seizure-free life. Regular postoperative follow-up is recommended to detect any malignant changes at an early stage.