In 2000, the patient presented with fullness his right ear. He was diagnosed with parotid gland cancer.He underwent surgery of total parotidectomy. After that he completed 50 days adjuvant radiation therapy. In 2010 CT scan of the patient revealed lung metastases but he refused to be treated. In 2015 he presented with backache. He reported weakness and back pain. Thorax BT scans revealed lung metastasis progressed. Endobronchial lesion biopsy has been reported as ?n the first instance “salivary gland metastasis.” The patient completed 2 cycles chemotherapy. After chemotherapy control BT imaging shows that the disease progressed. Because of this reason; six more cycles of chemotherapy were given and completed February by 2016. After three month drug-free period patient reported the wound on his foot. On Physical examination, there was necrotic, ulcerated wound on the first and second finger of the foot (Figure 1). The lesion look like diabetic foot wound. Histopathology of the lesion biopsy confirmed neoplastic lesion of parotid gland cancer metastasis. 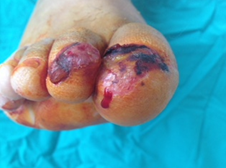