Citation: Takumi Satoh. Ketobiotics by Poly-3- Hydroxybutyrate: A Novel Prebiotic Activation of Butyrate-Producing Bacteria through 3-Hydroxybutyrate Donation to the Microbiota. Journal of Biotechnology and Biomedicine 5 (2022): 158-162.

Since the first target of poly-3-hydroxybutyrate (PHB), a simple bioplastic, is the microbiota, it has gained attention from the public and academia because of its promising function as a prebiotic food stuff for butyrate-producing bacteria. Since mammalian digestive enzymes cannot hydrolyze PHB, it passes through the small intestine and reaches the large intestine, allowing the gut microbiota to produce 3-Hydroxybutyrate (3HB) by the depolymerization of PHB around them. As a result, they become an energy substrate that promotes the growth of butyrate-producing bacteria and induces slight acidification of the gut environment. Thus, PHBs may be used as novel prebiotics to improve the gut environment. Based on this background, studies have proposed donating this ketone body to microbiota-mediated prebiotics, termed “ketobiotics”, to act as a microbial activator of the animal gut. Ketobiotics may help maintain the gut health of pets and industrial animals, including enhancing human antiaging in the future. Therefore, this review discusses the potential use of the prebiotic action of ketobiotics for activating butyrate-producing bacteria from other prebiotic strategies, initiated by the direct donation of 3HB to microbiota in the large intestine. 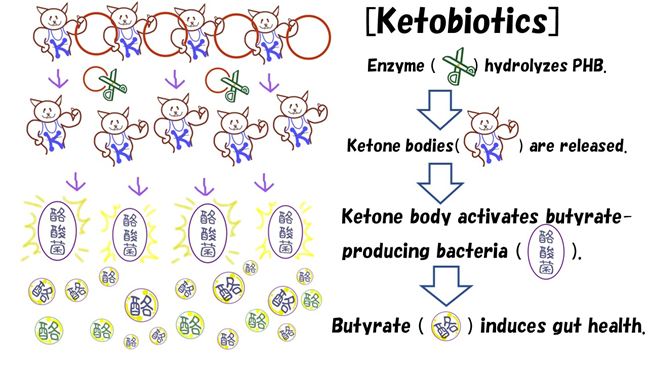 1. Poly-3-Hydroxybutyrate as a Microbial Controller in the Animal Gut

Although poly-3-hydroxybutyrate (PHB, Figure 1) are produced in the cytoplasm of some bacteria as water-insoluble inclusion bodies, they are the most well-known and understudied bioplastic. Therefore, since PHB is an intracellular energy and carbon storage compound produced by bacteria, in addition to its material features suitable for medical applications, it has been focused on as a resource for bio-implants and other medical applications [1,2]. Furthermore, PHB has gained global attention in the biological field because of its potentially new prebiotic actions, initiated by 3-hydroxybutyrate (3HB) donation to microbiota [3,4]. PHB was first reported to protect the small crustacean, Artemia franciscana, from the pathogenic actions induced by Vibrio campbellite [5,6]. Based on these reports, it is considered promising as an alternative anti-infection strategy in aquatic animals [5,6]. These protective effects may be partly through the induction of heat shock protein-70 [6]. Additionally, in the large crustacean, pacific white shrimp (Litopenaeus vannamei), PHB increases growth performance [7]. This growth enhancement may be induced by the upregulation of digestive enzymes, immune functions, and short-chain fatty acid (SCFA) contents, such as acetate, propionate, and butyrate [8]. Hence, these effects can be applied to the protection of fish. Similarly, in the European sea bus (Dicentrarchus labrax) [9], Siberian sturgeon (Acipenser baerii) [10], and soiny mullet (Liza haematocheila) [11], PHB changed the bacterial community composition and slightly reduced gut pH, beneficially affecting fish growth performance. Also, Wang et al. reported that PHB increased the growth rate of the yellow croaker, a fish. However, this effect was absent in piglets and did not affect them adversely [12]. Nevertheless, they estimated that PHB had some beneficial effects on piglets [12]. Accordingly, PHB was recently found to induce an increase in SCFAs, such as acetate, propionate, and butyrate in micro-mini pigs and slightly reduce gut PH [3], suggesting that it acts as an intestinal regulator in mammals (Figure 2). Moreover, while PHB had anti-tumor activity against rat colorectal cancer (CRC) through gut microbiota modulation [4], it also significantly reduced tumor growth associated with an increase in SCFAs (acetate, propionate, and butyrate) in the gut environment, plasma, and brain, including butyrate-producing microbiota populations [4]. The induced microbiota by PHB were including many butyrate-producing bacteria (genus) such as Clostridium, Eubacterium, Roseburia, Ruminococcus and Faecalibacterium [4]. These bacteria may produce butyrate and other SCFAs and modulate gut eveironment to excert protective effects against CRC [4]. This prebiotic effects (ketobiotics) may be protective against other inflammative and infectious deseases such as ulcerative colitis (UC). Therefore, these results indicate that PHB is a gut microbiota controller in mammals, which regulates gut health [3,4].

Figure 1: Chemical structure of PHB. Since PHB can be hydrolyzed by the PHB depolymerase of microbiota in the large intestine, it can increase the concentration of 3HB in an insulin spike-independent manner. 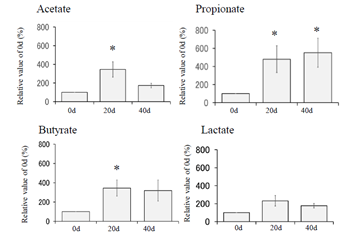 Figure 2: Increase in the concentrations of SCFAs [3]. Micro-mini pigs at 90d after birth were used for this experiment. PHB (2%) had been administered to them for 40days. Fecal samples at 0d, 20d and 40d were subjected to measuring of SCFAs (acetate, propionate, butyrate, and lactate) by use of high-performance liquid chromatography. Although acetate, propionate, and butyrate were increased in response to PHB addition, lactate was not increased. Nevertheless, pH significantly reduced from 8.2 to 7.4, suggesting that their gut environment had significantly improved.

2. Ketbiotics as a Novel Prebiotics

Some bacteria produce PHB molecules as inclusion bodies in the cytoplasm, which can be easily purified to yield a tasteless and odorless powder (purity > 85%) [13]. This powder can subsequently be used as a microbiota controller in mammals and humans (Figure 3) since, although the digestive enzymes of mammals cannot hydrolyze PHB, the microbiota in the large intestine can hydrolyze this molecule with their PHB depolymerases [1,2]. As a result, 3HB is produced around the microbiota, which can be used as an energy growth substrate [3,4]. Due to these events, microbiota growth, especially butyrate-producing bacteria, is upregulated, and microbiota diversity increases [3,4], indicating that ketobiotics by PHB can help human and animal gut health by inducing a butyrate-producing bacteria-dominant gut environment. Therefore, this research aims to improve human and animal gut environments using PHB-based ketobiotics (Figure 3). Although the pH of an ideal gut environment is slightly acidic [14,15], SCFAs released from the microbiota help regulate the mammalian gut environment to ideal conditions [3,4]. Notably, four SCFAs: acetate (C=2), propionate (C=3), lactate (C=3), and butyrate (C=4), are the main SCFA components produced by microbiota communities [14,15]. However, while many microbiota produce SCFAs, the intestinal bacteria determine which SCFA is preferentially produced and released outside the cells [14,15]. For example, in butyrate-producing bacteria-dominant gut environment, regulatory T cells are continuously activated to regulate excessive inflammation [16,17]. In these communities, butyrate activates differentiation into regulatory T cells and is directly involved in improving gut health [16,17]. A study has also reported that PHB allows microbiota to use 3HB as an energy substrate, activating butyrate-producing bacteria [3]. As a result, PHB activates the differentiation of regulatory T cells and controls immune functions [3]. Subsequently, the 3HB spreads into the gut space and is absorbed into mammals by active transportation on epithelial cells of the large intestine to increase the concentrations of 3HB in the blood [18-20]. Consequently, 3HB can function as an energy substrate or a physiologically active compound through specific receptors [20,21].

Figure 3: Basic concept of ketobiotics by PHB. PHB, a polyester compound of 3HB, can be hydrolyzed by PHB depolymerase of microbiota to release 3HB in the large intestine. In turn, 3HB activates the microbiota, allowing them to release SCFAs, such as acetate, propionate, and butyrate. In turn, 3HB is used as an energy substrate to allow the release of SCFAs, after which it is absorbed into mammals to induce various health effects.

The expression of mitochondrial 3-hydroxy-3-methylglutaryl-CoA synthase (HMGCS2), involved in the synthesis of 3HB from long chain fatty acids [22,23] in the epithelial cells of digestive tracts, especially in the large intestine, has been reported as a highly critical regulator of gut health against UC [24,25], CRC [26], and intestinal stem cell homeostasis [27]. Based on this background, studies have reported that while the exogenous administration of 3HB effectively protected rodent models of UC [24], the expression of HMGCS2 significantly decreased in patients with UC [25] and CRC [26], suggesting that protein downregulation was well correlated with disease progression. Furthermore, another study also reported that the expression of HMGCS2 was required to maintain epithelial stem cells in the large intestine [27], proposing that sustained low levels of 3HB by intestinal epithelial cells expressing HMGCS2 may influence the gut health of humans [24]. Overall, since the exogenous administration of 3HB to the large intestine is considered highly effective for gut health [24], compounds that sustainedly release 3HB at low levels in the large intestine are highly required for sustaining gut health [24]. For example, a ketone donor as a molecular tool for providing 3HB to the large intestine can replace the physiological roles of HMGCS2 in the large intestine [13], of which just PHB can satisfy these physiological human gut health requirements [3].

4. PHB as a Unique Ketone Donor to Micro biota

A ketone donor is a compound that releases 3HB into the digestive tract [3,13]. Studies have reported that although insulin spikes should be suppressed by reducing carbohydrate intake in order to increase the 3HB concentrations in the body since these spikes can inhibit the synthesis of 3HB mainly through the shutdown of HMGCS2 [28,29]. In contrast, ketone donors are not affected by insulin spikes. Therefore, they do not need carbohydrate restriction [3,13]. So far, three ketone donors have been identified: 3HB, ketone ester (KE) [30,31], and PHB [3,13]. Just as PHB can induce ketobiotics since it passes through the small intestine and donates 3HB to microbiota to change its structure [3,13], 3HB and KE can also donate 3HB to mammals since they are absorbed in the small intestine and cannot reach the large intestine [20,30]. I summerized the differential actions of ketone donators in Table 1.

Table 1: PHB as a ketone donor to microbiota. Although 3HB and KE donate ketone dody to mammals in the small intestine and never reach the large intestinge, PHB donates it to microbiota. Because of large capacity of digestion of mammalian small intestine, 3HB and KE produces transient increase in ketone bodies in the systemic circulation. In contrast, PHB can induce sustained increase in ketone bodies because of limited capacity of microbiota depplymerase [3,13].

3HB is the most essential energy substrate in addition to glucose [20,21]. It can function directly as an energy substrate for mitochondrial oxidative metabolism. It also activates specific receptors to induce various physiological actions, improving cognitive functions, and enhancing lipid metabolism/antiaging activities [20,21]. 3HB can be orally administered, increasing several minutes after oral intake and reducing to baseline within several hours to induce a transient increase in 3HB concentrations. Subsequently, it becomes a free-acid form under slightly alkaline condition of the small intestine, after which it is absorbed into the blood through specific transporters on the epithelial cells of the small intestine [20,21].

Since PHB, a 3HB polyester, cannot be digested by mammalian enzymes but can be hydrolysed by enterobacterial enzymes in the large intestine [1,2], the patterns of 3HB increase in the blood differ from those of 3HB and KE (Figure 4) [3,13]. Thus, while KE can produce a sharp increase in blood 3HB levels to mM levels and returns to the baseline within several hours [3,13], 3HB is absorbed through the specific transportation of epithelial cells of the large intestine after microbial enzymes hydrolyse PHB. Therefore, PHB [3,13] needs several hours to raise the concentrations of 3HB and induce a sustained increase in 3HB. Subsequently, after PHB is absorbed into the microbiota, it serves as an energy substrate to induce various physiological effects initiated by microbiota activation [3,13], starting with the liberation of organic acids (acetate, propionate, and butyrate) [3,4]. As a result, PHB can change the microbiome’s structure, transforming it into a butyrate-producing bacteria-dominant environment, thereby protecting mammals against CRC and UC [3,4].