The patient, a 28-year-old woman, was admitted to the hospital for "half a month of splenic mass found by physical examination". Physical examination: clear, spiritual, no yellow skin and sclera, no swelling of superficial lymph nodes, no difference between cardiopulmonary examination, abdominal soft, no obvious mass, normal bowel sounds, no tenderness and rebound pain in the whole abdomen, negative mobile voice, negative Mhrphys sign, negativity of renal percussion pain, no edema in both lower extremities, negative pathological signs. Imaging diagnosis of abdominal CT enhancement: the cystic space-occupying of the spleen is considered. We should improve the preoperative examination and exclude operative contraindications. During the operation, there were about 8cm of the upper pole of the spleen, and the boundary was clear. There was no obvious abnormality in the exploration of the abdominal viscera. The operation was successful. The operative time was 115 minutes and the bleeding was 20 ml. On the first day after the operation, the patient took a liquid diet, anal exhaust for second days, took half liquid, and drained the abdominal drainage tube, and recovered fourth days later. Postoperative pathology revealed epidermoid cyst. 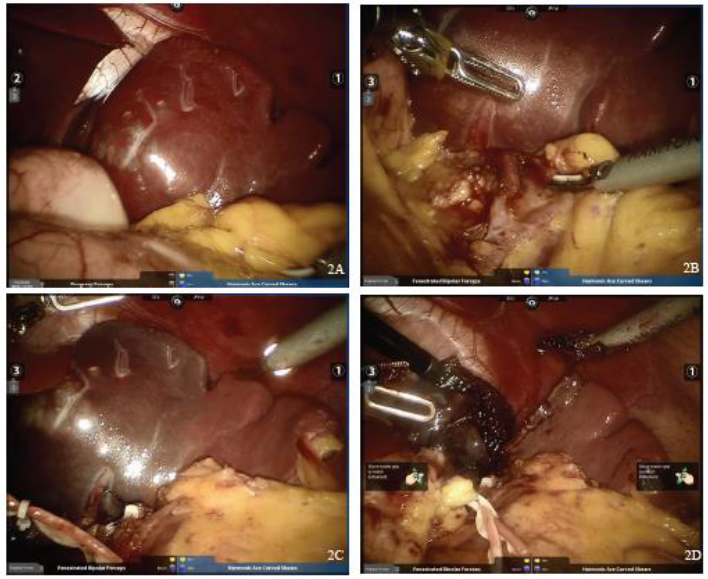 With the popularization and application of ultrasound, abdominal CT and magnetic resonance imaging in clinical practice and the awareness of public health examination, the number of splenic cysts diagnosed in recent years has increased significantly. According to the etiology, splenic cysts can be divided into two categories: non-parasitic cysts and parasitic cysts. In non-parasitic cysts, splenic pseudocysts and splenic true cysts can be classified according to the presence or absence of lining epithelium in the cyst wall. Pseudocysts are more common. Most of them are formed after trauma secondary to subcapsular hematoma of the spleen. They are also called secondary splenic cysts. The wall of the cyst is only fibrous tissue without lining epithelium. The cyst contains blood or serous fluid. The Splenic cyst is a rare disease with unknown etiology. The inner wall of the cyst has lining epithelium. The cyst can be unilocular or multilocular. According to pathology, it can be divided into four types: epidermoid cyst, dermoid cyst, cystic lymphangioma, and cystic hemangioma. Ultrasound examination is often the first choice for splenic cysts because of its non-radiation, low cost, and convenient examination. The images are mostly cystic masses with clear borders and dark areas without echoes. After the detection of splenic space-occupying lesions by ultrasonography, CT, MRI, and other imaging examinations can further understand the size, shape, and type of splenic cysts. Number, characteristics of cyst cavity and wall, and adjacent relationship with surrounding organs are of great value.

Surgical treatment is the main method for a splenic cyst. Clinically, non-parasitic splenic cysts less than 2.0 cm in diameter and without any symptoms can be observed regularly. When the diameter of splenic cyst is more than 5.0 cm, the follow-up of the outpatient department increases rapidly or complications such as compression of surrounding organs, rupture and infection occur, timely surgical treatment is advocated. At present, the main surgical methods depending on the size and location of the cyst, including fenestration and drainage of splenic cyst, total splenectomy, splenectomy with preservation of accessory spleen, hemisplenectomy, and partial splenectomy. As the main immune organ of the human body, the spleen plays the role of regulating immune function and clearing senile blood cells. If total splenectomy is performed, the chance of overwhelming post-splenectomy infection (OPSI) will increase, and complications such as platelet elevation and venous thrombosis will be more likely to occur. Therefore, it is advocated that surgery should preserve the function of the spleen as far as the patient is concerned, such as the presence of a cyst on the upper pole of the spleen or the presence of a cyst at the lower part of the spleen. The diameter of the spleen is less than 50% of the total volume of the spleen. The partial splenectomy or partial splenectomy can be performed according to the specific conditions of the patients.

Partial splenectomy includes irregular partial splenectomy and regular partial splenectomy. The latter is based on the anatomical basis of sectional blood supply in the spleen. After pretreatment of the two or three-grade splenic pedicle ligature, the corresponding splenic segment, splenic lobe or half spleen can be resected according to the ischemic line of the spleen surface. Regular splenectomy is much more difficult than total splenectomy and irregular splenectomy. The main technical points of regular partial splenectomy are: (1) fine dissection and ligation of the second and third splenic pedicle vessels close to the spleen hilum, each bundle is as small as possible, while observing the spleen blood circulation; (2) moving 0.5-1.0 cm to the healthy side in the relatively non-vascular plane of the spleen, and cutting the spleen from shallow to deep with an ultrasound knife, ligating the blood section. For example, if there are more blood vessels in the splenic section of the spleen, the incision and closure device can be used to cut off the blood vessels. It can be applied to various bleeding measures such as bleeding on the section, wet dressing with warm saline gauze, 8-word suture, adhesives, microwave and radiofrequency. (3) peritoneum or splenic capsule transplantation [1].

In recent years, laparoscopic splenectomy has gradually replaced open splenectomy as an important method for the treatment of splenic cysts with the accumulation of laparoscopic surgery experience and the improvement of technology. Compared with the operation time and prognosis, laparoscopic splenectomy has less bleeding and shorter hospitalization time. Compared with laparoscopy, the 3D operation vision and mechanical arm of Da Vinci robotic surgery system overcome the limitation of flexibility in vision and operation instruments, which can greatly enhance the controllability, stability and accuracy of surgery. Although its application in clinical practice, especially in splenic surgery, is in its infancy, it has been reported that robot-assisted partial splenectomy significantly reduces the anatomical time of the splenic pedicle, and overcomes the difficulty of hemostasis and spleen translocation in traditional laparoscopic partial splenectomy, and reduces the amount of bleeding [2]. Pier, etc. [3] 24 cases of robot-assisted splenectomy were reported. Among them, 3 cases were partial splenectomy. The median bleeding volume was 75 ml. The average operation time was 199 (+65 minutes). The median hospital stay was 5.5 days after the operation. All patients recovered well after the operation. Berelavichu et al. [4].

A total of 21 cases of the non-parasitic splenic cyst were compared with laparoscopic partial splenectomy. The results showed that intraoperative hemorrhage in the robotic group was significantly less than that in the laparoscopic group. There were no postoperative complications in the robotic group, while 2 cases occurred in the laparoscopic group (left pleural effusion and operative area effusion). In this case, the robot-assisted regular partial splenectomy was performed to prevent the patients from having low comprehensive immunity and more precise excision of the lesion. The procedure was smooth, the field of vision was clear and the bleeding was less. In practice, it is found that the magnification effect of the robotic surgical system is stronger than that of laparoscopy. It has more advantages for the fine anatomy of the two-degree splenectomy vascular pedicle, and can better perform regular partial splenectomy. As a new minimally invasive technique, it has more room for development, though there are still many problems. Problems and controversies, but with the continuous updating of surgical instruments and equipment, the continuous progress of basic and clinical research of spleen, the accumulation of surgical experience and the improvement of surgical skills, this method of operation will be applied more and more.