The Role of Radiation Therapy in Recurrent Ovarian Cancer

Recent remarkable technological advances in radiation therapy made the way for stereotactic body RT (SBRT), which can be used for oligometastatic tumors anywhere in the body. Oligometastases from gynecological malignancies have been considered as one of the most promising candidate for SBRT. It is suggested that SBRT was associated with high rates of local control, impressive survival, and minimal toxicity in ovarian cancer. It is also suggested that SBRT serves to destroy chemoresistant tumor clones, and help stimulate innate immune response or expose tumor neoantigens, and can be used in women who have had prior radiotherapy.

The initial management for ovarian cancer (OC) is a staging laparotomy/primary debulking surgery followed by either systemic chemotherapy or observation. Historically, adjuvant whole abdominal radiation therapy (RT) has been used; however, it should not be used to treat epithelial OC because it is unable to deliver a curative radiation dose to an entire anatomic region, with multiple dose-limits in normal tissues [1]. And it is clearly recommended for palliative settings, particularly in patients who fail chemotherapy.

In recent years, remarkable technological advances have been made in RT by incorporating new imaging modalities, sophisticated computers and software, and new delivery systems. Two-dimensional RT, based on plain radiography, has been largely replaced by three-dimensional RT based on CT imaging. Intensity-modulated RT allows the creation of irregularly shaped radiation doses that conform to the tumor while avoiding critical organs. Further advancement of this technique was achieved by volumetric modulated arc therapy, which allows even better dose conformity and further reduction of the treatment duration [2]. Image-guided RT enabled the integration of various imaging modalities directly into the linear accelerator, which resulted in daily monitoring of patient positioning, tumor position, and alterations in patient anatomy, allowing immediate detection of changes from the imaging findings at the planning stage and enabling modification of the irradiation procedure [3]. These advancements have enabled stereotactic body RT, which can be used for oligometastatic tumors anywhere in the body [4]. The concept of an oligometastatic state was first proposed by Hellman and Weichselbaum [5] as an intermediate state between limited primary lesions and polymetastatic cancers. Oligometastases from gynecological malignancies have been considered as one of the most promising candidates for stereotactic body RT. Kowalchuk et al. [6] studied OC patients treated with SBRT and concluded that SBRT was associated with high rates of local control, impressive survival, and minimal toxicity in ovarian cancer, especially with a median biologically efficient dose >35 Gy and treatment for lymph nodes. Furthermore, Fields et al. [7] demonstrated that SBRT destroys chemoresistant tumor clones, stimulates the innate immune response, exposes tumor neoantigens, and can be used in women who have had prior RT. Based on these results, clinicians should consider SBRT as an effective and safe option for patients with oligometastatic OC.

Ovarian clear cell cancer (OCCC) is a histological subtype of epithelial OC with distinct behavior. OCCC is more likely to be detected at an early stage than high-grade serous cancers, and when confined within the ovary, the prognosis is good. However, advanced disease is associated with a very poor prognosis and resistance to standard treatments. Hogen et al. [8] studied 163 patients with stage I or II OCCC; 44 (27%) patients were treated with adjuvant RT and 119 (73%) had no adjuvant RT post-surgery. As a result, they did not find a progression-free or overall survival (OS) benefit for adjuvant RT. Roy et al. [9] compared the outcomes of patients with stage IC or II OCCC treated with adjuvant chemotherapy versus chemoradiotherapy. As a result, adjuvant chemotherapy was associated with a lower risk of failure compared to chemotherapy alone. However, there was no difference in the OS between both groups. Ogasawara et al. [10] concluded in their review that the efficacy of RT for OCCC is uncertain, and a prospective randomized controlled trial is required to evaluate adjuvant RT for high-risk early stage OCCC.

Brown et al. [11] evaluated the effectiveness of definitive involved-field RT in 102 selected patients with locoregional recurrent epithelial OC. Among them, they reported that eight OCCC patients had higher 5-year OS and progression-free survival rates than other patients. Westhoff et al. [12] studied 53 patients with recurrent OCCC. Twenty-four (45.3%) patients received RT. They found that RT was associated with improved survival. Furthermore, recurrent OCCC can be treated with curative intent if the relapse is solitary, and completely resected or encompassed with RT [13]. Therefore, RT may be unsuitable in adjuvant therapy but may be of use in locoregional recurrent OCCC.

Recent advancements in RT have enabled the use of heavy charged particles, including protons, neutrons, and heavy ions (i.e., helium, carbon, nitrogen, argon, and neon). Proton beam therapy (PBT) is the most common form of heavy charged particle RT for a variety of malignancies. It allows the delivery of high radiation doses to tumor cells and very low or zero doses to normal cells, which is recognized as an ideal treatment modality for malignant diseases, especially for organs-at-risk, with less toxicity. It is confirmed to be safe, precise, and efficient, with tolerable toxicity. However, its cost varies and building sites are required to install and maintain the PBT treatment machine.

A good PBT target is believed to be pediatric tumors, because the long-term side effects of RT, such as secondary malignancies and medical morbidity, can be reduced. For adult malignancies, possible good PBT targets were reported as follows: prostate cancer, uveal melanoma, chordoma and chondrosarcoma, breast cancer, lung cancer, brain tumors, head and neck cancers, and gastrointestinal malignancies [14]. In gynecologic neoplasms, the majority of patients who were treated with PBT had cervical cancer, although several cases of vaginal cancer and endometrial cancer were reported. We report a case of recurrent OCCC in the sigmoid colon that was successfully treated with PBT [15]. In this case, the recurrent tumor was solitary and PBT enabled the administration of a relatively high dose of 66 Gy to the target tumor. The irradiation field was reduced by three times to minimize damage to normal tissues, especially the small intestine (Figure 1). The patient has been disease-free for more than 10 years after discontinuation of PBT. Although only one case of recurrent OC was reported to be treated with PBT [15], PBT may be a potential option for chemotherapy-resistant, localized, recurrent OC. Patients with OCCC might be good candidates for PBT because OCCC is less sensitive to standard platinum-based chemotherapy [15]. 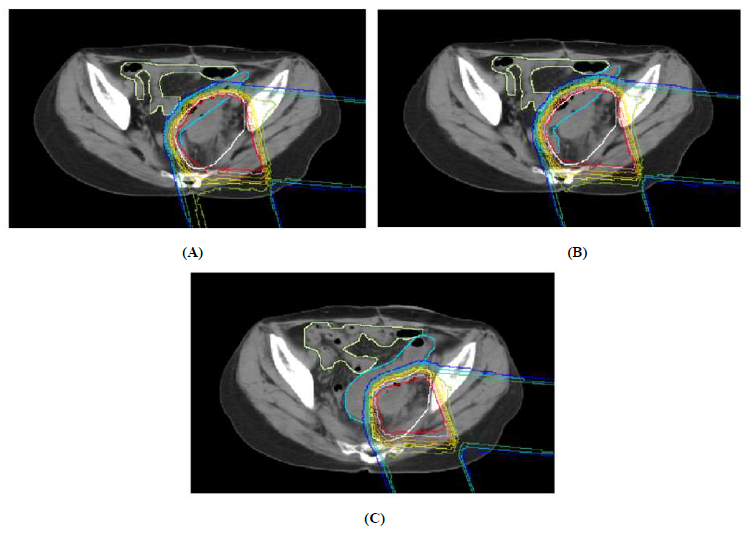 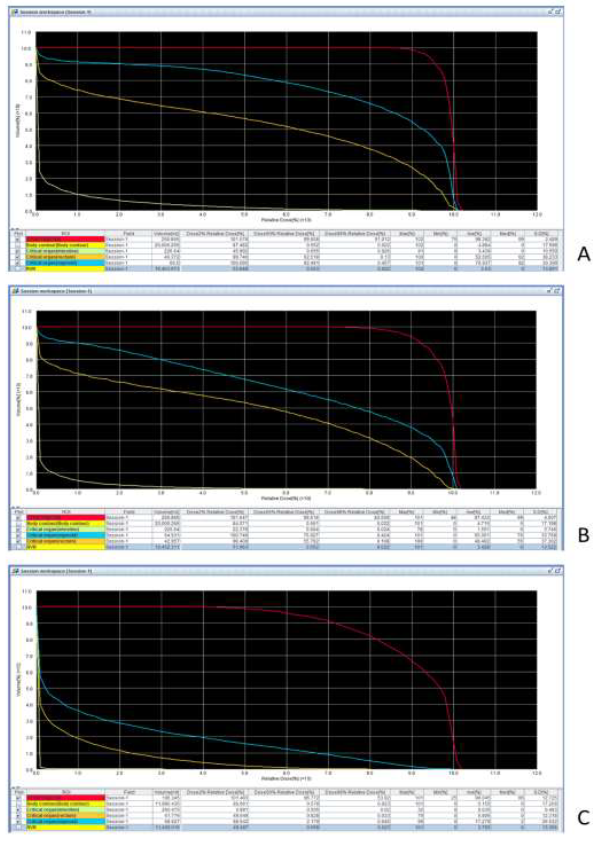