Cancer is a group of diseases with some of the highest health burdens globally and its mortality rate comes second after heart failure. Conventional cancer treatment options, of which chemotherapy is the main option, do not have a high success rate. As an alternative treatment option, nutraceuticals, derived from “nutrition” and “pharmaceutics,” are being considered. Nutraceuticals have gained traction for their use in cancer treatment and being explored for their therapeutic value. Unlike conventional treatments which have major side effects, nutraceuticals possess minimal side effects. Most recently the implications of nutraceuticals in various types of cancers have been studied due to their medicinal potential and benefits, especially in relation to decreasing the tumor burden.

1. Overview of Cancer and Cancer Staging

Cancer is the second leading cause of death accounting for about 1 in 6 deaths in 2018 [1]. By definition, cancer is an umbrella of diseases characterized by uncontrollable abnormal cell growth; cancer can start in a specific tissue or organ and in advanced stages metastasize to other tissues and organs in the body [2]. Globally, the cancer burden in terms of physical, emotional, and financial strain continues to grow [2]. Cancer advancement can be defined by certain stages. Multiple staging systems exist, however, the most common and widely used staging system is the TNM system as seen in Figure 1 [3, 4]. 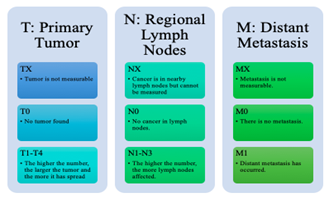 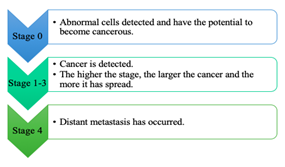 Detecting cancer at an early stage is crucial to the success and path of treatment. Early detection is made possible through screening. The treatment for cancer is surgery, medications, chemotherapy, radiotherapy, or a mix of the aforementioned. A team consisting of professionals from multiple disciplines will derive an individualized treatment plan for a patient based on cancer type, cancer stage, and other factors [2].

Nutraceuticals, a term coined by Stephen Defelice, is derived from “nutrition” and “pharmaceutics” which are combined to create compounds that are beneficial to human health and therapeutic [6]. Nutraceuticals can be either plant- or animal-derived. Well-known nutraceuticals are mainly phytochemicals - plant extracts that include parts of the plant such as the roots, seeds, berries leaves, bark, or flowers [7, 8].

There are plethora of categorizations of nutraceuticals. They have been previously categorized as potential or established nutraceuticals, chemical constituents, or based on their therapeutic effect [9]. Figure 3 summarizes the most common classes and active ingredients of nutraceuticals. The active ingredients are predominantly secondary metabolites produced by plants. Phytochemicals that potentially have therapeutic value include polyphenols, flavonoids, isoflavonoids, anthocyanidins, terpenes, carotenoids, alkaloids, and saponins [8]. These secondary metabolites are behind the medicinal properties of the plants including but not limited to anticarcinogenic, antitumorigenic, anti-inflammatory, antioxidant, antiseptic, and antimicrobial [8]. 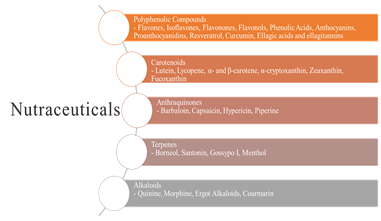 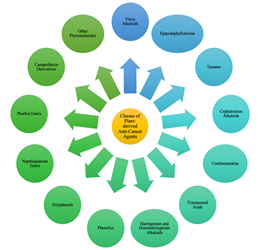 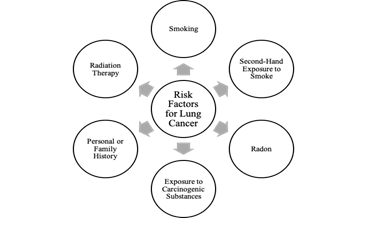 Out of the risk factors mentioned in figure 5, smoking is the leading risk factor followed by exposure to radon. Smoking has been strongly linked to the increased occurrence of lung cancer. Quitting smoking will reduce the risk for lung cancer, but not to the level of someone who has never smoked [17, 18].

Plants and herbal medicine have been implicated in the care, management, and treatment of lung cancer. Plant-derived molecules may also increase or decrease the risk of lung cancer. Carotenoids, alpha-carotene, beta-carotene, lycopene, lutein or zeaxanthin, isothiocyanates, flavonoids, flavanones, proanthocyanidins, isoflavonoids, have been associated with a potential to decrease the risk of lung cancer in certain populations when administered at high levels [19, 24]. Medicinal plant extracts have shown anticancer activity against lung cancer in preclinical and clinical studies with inducing apoptosis as one of the most common mechanisms of action demonstrated. 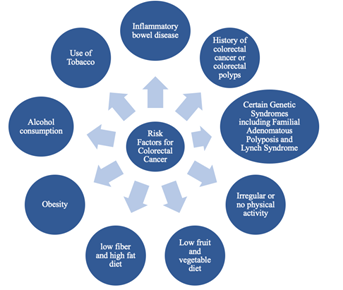 Plant-derived bioactive compounds are often used in the treatment of colorectal cancer. In fact, many anti-cancer chemotherapeutic drugs utilize plant bioactive compounds as well. The most commonly used bioactive compounds in colorectal cancer include curcumin, anthocyanin-rich phenolics, ellagic acid, catechins, quercetin, alkaloids, emodin, carnosic acid, oleanolic acid [28, 29]. Additionally, plant extracts have also been shown to have anticancer activity against colorectal cancer such as methanol extracts of Achyranthes aspera, ethanol extracts from Withania somnifera and Chamaecyparis obtuse, water extracts of Salvia officianales and Salvia fruticosa [28-29]. Whole plants have also been implicated with different parts of the same plant contributing to different portions of management, treatment, and care; an example of such a plant is moringa [28, 29]. 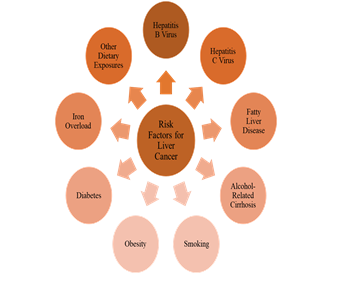 Phytochemical studies have become popular because of their beneficial effects on human health, which also includes anticancer properties. The Ammi visnaga, native to the Middle East, has been shown to have antimicrobial, anti-inflammatory effects and is used in the treatment of kidney stones and coronary diseases [32]. There was a study done investigating the cytotoxicity and apoptotic effect of the extract on human liver cancer cell lines. The study found that the seed extracts had a hepatoprotective potential and could be a potential therapeutic agent [32]. A β-carboline alkaloid, dehydrocrenatidine from Picrasma quassioides, is known to have analgesic effects and has demonstrated anticarcinogenic effects [33]. A study has demonstrated that dehydrocrenatidine inhibits proliferation and induces apoptosis, thus is identified as a potent anticancer agent [33].

In 2020, stomach cancer, also referred to as gastric cancer, was the fifth most common cancer globally with 1.09 million cases and was the fourth-most cancer-caused deaths with 769,000 deaths globally [1]. In the United States, the estimated number of new cases of gastric cancer in 2022 is 26,380 cases with the estimated number of deaths in 2022 being 11,090 deaths [34]. The 5-year survival rate in the United States is 33.3% [34]. By definition, gastric cancer is defined as cancer originating in the lining of the stomach. Figure 6 shows the most common risk factors for stomach cancer [35]. 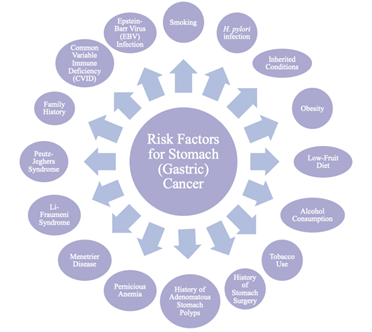 Though many plant-derived agents have not been identified for stomach cancer, numerous agents are being explored including new compounds as well as compounds that have shown efficacy in other cancers. Isothiocyanates are one such compound that is being explored for their efficacy against gastric cancer [36]. Others include resveratrol and oleanolic acid [37, 38]. 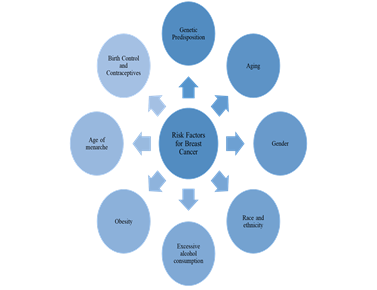 Many plant extracts are being explored as potential treatment options. In a study, it was confirmed that methanolic extract of Plantago major has cytotoxic effects on breast cancer. Betulin and betulinic acid isolated from birch trees have shown anticancer effects. Methanolic extracts of Calystegia sepium have shown a significant increase in apoptosis in all cancer cell lines evaluated in the study [41]. Another plant that has shown anticancer effects is Mangifera indica. Previous studies have reported anti-cancer activities of Mangifera indica pulp extracts which have been attributed to its polyphenolic contents [42].

8. Advantages of Nutraceuticals in Cancer Treatment

As cancer is a leading cause of death globally, effective treatment is necessary. Conventional cancer treatment includes chemotherapy, radiation therapy, adjuvant therapy, immunotherapy, hormone therapy, and surgery [7]. There are some drawbacks associated with the use of conventional cancer treatments. Chemotherapy is most often used to treat cancer, however, 90% of chemotherapeutics fail to achieve their goal due to chemoresistance and cause massive side effects [7]. As cancer cells develop resistance to chemotherapeutics, increasing the dosage could be considered to combat chemoresistance, however, there are massive side effects [7]. Due to this other therapeutic options should be considered. This is where the use of nutraceuticals is being explored. These can improve the therapeutic efficacy of the current drugs and can become a viable treatment option while having minimal side effects on noncancerous cells [7].

Nutraceuticals, in recent decades, have been growing in importance, especially in relation to cancer care, management, and treatment. In the top 5 cancers by the number of deaths globally, nutraceuticals have shown great potential to play a significant role. The use of nutraceuticals in these cancers among other cancers and ailments will only increase with the further advancement of research and development of nutraceuticals.

The authors would like to acknowledge the School of Science, Engineering, and Technology at Penn State Harrisburg.

The authors declare no conflicts of interest regarding the publication of this review.