Generation and Characterization of A Carboplatin Resistant Ovarian Cancer Model

Ovarian cancer (Oc) is one of the most lethal gynecological malignancies afflicting women. It is generally detected in the late stages as it remains asymptomatic in the early stages. The five year survival rate for cancers detected in the late stages is about 26% as against 93% when detected in early stages [1]. The first-line of treatment for advanced OC is cytoreductive surgery to eliminate the bulk of tumors followed by intravenous (IV) or intraperitoneal (IP) administration of carboplatin in combination with taxane. Although most patients initially respond to treatment, the disease recurs in almost 60-70% of patients leading to high mortality [2, 3]. The high mortality rate of ovarian cancer is attributed to both innate and acquired drug resistance [4]. Yet, the underlying molecular basis of therapeutic resistance still remains elusive. Understanding the molecular basis for therapeutic resistance will facilitate the identification of actionable targets and development of new personalized and/or combination therapies for cancer patients. Therefore, there is a need to generate experimental models which are similar to the resistant cells in the patients and thereby aid in understanding the acquisition of carboplatin resistance in ovarian cancer.

2.1 Determination of cell viability and IC50 value of Carboplatin

2 x 104 cells were plated in 96 well plates and after 12 h of seeding the cells were treated with various concentrations of carboplatin (0.0 mM, 0.05 mM, 0.10 mM, 0.15 mM, 0.20 mM, 0.25 mM) for 48 hours. After 48 h of drug exposure, MTT (0.5 mg/ml) was added to each well and incubated for 4h until farmazon crystals were formed. The crystals were dissolved using DMSO and the absorbance was read at 570 nm. Cell viability is expressed as percentage of absorbance of drug treated cells relative to that of the untreated. All the assays were performed in triplicates and repeated three times.

OVCAR3 cells are one of the widely used in vitro models to study ovarian cancer biology. In order to establish a clinically relevant CR model of OVCAR3 cells, a pulse selection strategy was adopted. OVCAR-3 cells were seeded at density of 1 x 105 cells to form a monolayer. 12 h after seeding, the cells were pulse treated with sub-lethal concentration (30 uM) of carboplatin for 3 hours. After 3hours of treatment, drug containing medium was withdrawn and replenished with drug free complete medium and cultured till the cells reached 75% confluence. Once confluent the cells were seeded in the same density as mentioned previously and the drug regimen was continued in the same manner for 6 cycles (Figure 1). After the drug resistant clone is established, the fold resistance is calculated as a ratio of IC50 of CR cells: Ic50 of parent cells. 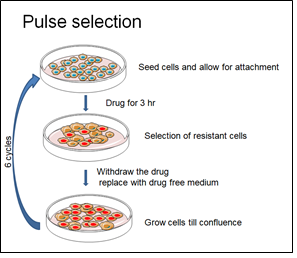 The acquired images were analyzed using Image J software. The integrated density and grey values of were obtained and the corrected total cell fluorescence (CTCF) was calculated as CTCF = Integrated Density – (Area of selected cell X Mean fluorescence of background reading. Data is expressed as means ± SD and p value is calculated.

Statistical analysis was performed using student’s t-test and a p- value< 0.05 was considered to be statistically significant.

3.1 Determination of IC50 of carboplatin in parental cells

OVCAR-3 cells were chosen as the parent cells for the current study as this cell line is derived from the papillary adenocarcinoma origin and over 80% of the patients with ovarian carcinoma fall in this class. IC50 value of carboplatin for parental OVCAR-3 cells was determined by MTT assay using varying concentrations of carboplatin. Effect of each dose of drug was assessed in triplicates and the assay was repeated thrice. The IC50 value of carboplatin was determined to be 84.37µM (Figure 2). 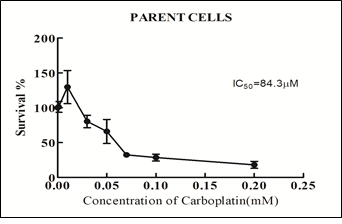 Figure 2: Determination of IC50 in parental cells by MTT assay.

The cells were seeded in tissue culture dishes and exposed to sub lethal (30 uM) concentration of carboplatin for 3 hours (pulse selection strategy). Following the three-hour drug exposure, a population of cells detached from the culture dish and began to float. These cells were removed and the cells were replenished with fresh drug free medium and allowed to grow to at least, 75% confluence. It was noteworthy that these cells that remained adherent to the dish after the 3 hour drug exposure doubled slower and appeared larger than the parental counterpart.

The drug treatment was done for a total of 6 cycles. Post 6 cycles of drug exposure, the viability of these cells was assayed to determine the IC50 value. The IC50 value of the carboplatin resistant clones was determined to be 516.2 µM and the fold resistance (IC50 of CR cells/IC50 of parent cell) was found to be 6.34 (Figure 3). 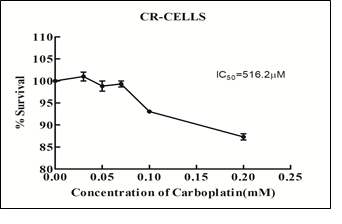 Figure 3: Determination of IC50 of CR- cells after 6 cycles of drug treatment assayed by MTT assay.

The morphology of both parental and drug resistant cells was monitored during administration of drug. After the treatment of the cells with the initial dosage, we observed that many of the cells during the recovery phase (cells replenished with drug free medium) detached from the tissue culture plastic (8-12th day) and appeared round. However these cells were pelleted and seeded back into a new culture dish and these cells adhered back to the culture dish, indicating its survival strength during acquisition of drug resistance (Figure 4). After the fourth cycle a few cells began to form cellular aggregates in the culture similar to the aggregates that form in the recurrent ovarian cancer patients indicating a close similarity with the clinical setting (Figure 5). The drug resistant cells appeared larger with bigger nucleus that their parent counterpart (Figure 7a and c). 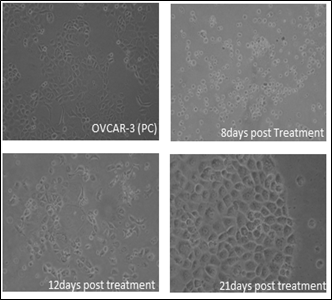 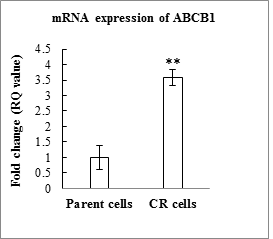 Figure 6: Graphical representation of the mRNA expression of CR-cells and parent cells (p=0.0052).

Figure 7: (A and C): Immunofluorescence staining of Ku80 and Ku 70 in parent and CR-cells. The panel of images depict that the CR cells are larger and have bigger nucleus compared to parental cells. (B and D): Graphical representation of mean CTCF value of Ku80 and Ku70 in parental and CR-cells respectively. (Scale: 100µm).

Carboplatin is considered as a first line drug in the treatment of ovarian cancer. Elevated DNA repair mechanism, increased efflux of drug, and intracellular detoxification mechanisms are known to contribute to the development of chemoresistance in ovarian cancer patients. In the current study, we have generated a carboplatin resistant cell line which mimics the clinical scenario. Clinically relevant drug resistant cells are generated by closely mimicking the conditions that the cancer patients experience during chemotherapy [5]. Such resistant clone/cell lines display a two- to eight-fold resistance compared to their parental cell line. Dosage of drug administered is low, and a pulsed treatment strategy is used where the cells are allowed to recover in drug-free media. The pulse selection strategy produces more stable clones.

The resistant cells generated in this study are larger than their parental counterpart and divide rather slowly similar to the resistant cells that remain within the patient. Such slow cycling phenotypes have been identified in several cancer types and are known to confer a survival advantage within the tumor environment [6-9]. Like in most drug resistant tumors, the mRNA level of the drug transporter protein ABCB1 was also found to be upregulated in CR cells and several studies have reported that ABCB1 up regulation is implicated in poor overall survival and prognosis of ovarian cancer [10-13]. We have further shown that the expression of Ku80, a protein encoded by the XRCC5 gene, involved in DSB repair, is found to be higher in the resistant clone. The higher expression of DSB repair genes are known to contribute to several aspects of tumor progression including drug resistance [14-16].

The generation of carboplatin resistant cells described herein can be used to generate specific drug resistant model that could be a functional tool to explore novel, and relevant molecular and cellular mechanisms of chemo-resistance, which in turn, help design new treatment strategies for highly resistant cancers.