Uterine leiomyosarcoma (U-LMS) is the most common histotype among all primary uterine sarcomas. The lung, peritoneum, pelvic or para-aortic lymph nodes, bone and liver are the most common metastatic sites involved. However, some case series of atypical sites of metastasis such as heart, brain and different endocrine glands have been described. Here we report the clinical presentation and therapeutic management of two patients affected by U-LMS with a very atypical behavior, characterized by soft tissue metastases with an impressive and massive enlargement during chemotherapy despite a good control of the other sites of disease.

Uterine leiomyosarcoma (U-LMS) is a rare tumor, accounting for about 1% of all uterine malignancies, but it represents the most common malignant gynecological mesenchymal tumor [1, 2]. For patients with localized disease, the standard of treatment is en bloc total hysterectomy [3]. Adjuvant radiotherapy or chemotherapy is not, so far, recommended, but it could be evaluated in selected cases [4, 5]. For women with advanced unresectable U-LMS, the administration of chemotherapy is the first choice of treatment. The systemic therapeutic regimens include doxorubicin associated or not to dacarbazine as first line. Other active agents are gemcitabine and docetaxel (alone or combined), trabectedin, dacarbazine, pazopanib and, rarely, endocrine therapy [6, 7].

Common sites of metastases from U-LMS are lungs, pelvic or para-aortic lymph nodes, bone, skin and soft tissues [8, 9]. Case reports of atypical site of metastasis such as heart, brain and different endocrine glands have been described [10]. Prompt detection and histological diagnosis of skin and soft tissue metastases from U-LMS are particularly important, as these lesions could be often misdiagnosed as de novo primary tumors compromising the appropriate management and the prognosis. Here, we describe the clinical manifestation and therapeutic management of isolated subcutaneous soft tissue metastatic lesions from U-LMS with atypical and exceptional behavior characterized by an impressive and massive enlargement during chemotherapy although all the other metastases were stable or only mild progressing. Our case series highlights the importance of a prompt and correct diagnosis of soft tissues metastatic lesions, emphasizes the role of locoregional treatment in metastatic U-LMS and could guide further investigation in this context.

In September 2017, after multiple recurrent methrorragic events, a 53-year-old woman underwent laparotomy with total bilateral hysteroannessiectomy and multiple lymph nodes sampling. The histology report showed a U-LMS, grade 3 according to Fédération Nationale des Centres de Lutte Contre le Cancer (FNCLCC) grading system, with vascular, lymphatic invasion and massive necrosis. Positivity for desmin, p53 and negativity for CD10 and Bcl-2 were revealed by immunohistochemistry (Figure 1A). The stage was pT1 pN0 M0 using the International Federation of Gynecology and Obstetrics (FIGO) system. After surgery, the patient suffered from CMV-related enterocolitis and therefore, she did not receive adjuvant chemotherapy. In July 2018, she presented a sudden onset of a large right leg painful subcutaneous lesion involving the front of the leg, a biopsy confirmed the leiomyosarcoma origin and the computed tomography (CT) scan showed a large subcutaneous mass (Figure 1B, Figure 2A). A CT scan showed also the appearance of multiple pulmonary lesions (Figure 3A).

In August 2018, she therefore started a first line therapy with doxorubicin and olaratumab until February 2019 when, after pulmonary progressive disease (PD), she started a new line of therapy with doxorubicin (the last two courses before the total cumulative dose) and dacarbazine. In June 2019, a CT scan showed a massive PD of the right leg soft tissue metastasis measuring 17 cm, but stable disease (SD) in the lung (Figure 2B and 3B). Physical examination revealed a very painful right leg mass of about 20x8 cm. The patient underwent radiotherapy of the right leg (40 Gy in 4 fractions on the central area and 20 Gy in 4 fractions peripherally) with clinical benefit reducing the pain, then followed by local excision. The histological examination showed metastases from primary U-LMS, with more than 60% of necrotic component. The patient is currently alive, without evidence of soft tissue disease in the leg, but due to lung metastases, she is still receiving chemotherapy with gemcitabine and docetaxel.

In September 2016, after vaginal bleeding, a 55-year-old woman performed a transvaginal ultrasound showing the presence of an intrauterine mass. A biopsy was consistent with the diagnosis of U-LMS with positivity for desmin and p53 and negativity for CD10 and Bcl2 at immunohistochemistry (Figure 4 A). A staging CT scan showed pulmonary, hepatic, soft tissue and bone lesions. The stage of the disease was IV (M1). She started a first line treatment with Doxorubicin and Dacarbazine and after 3 months, due to persistent massive vaginal bleeding, she underwent a total laparotomy bilateral hysterectomy, bilateral adnexectomy, omentectomy, removal of peritoneal nodules and multiple peritoneal sampling. The histological examination revealed U-LMS, grade 3 according to FNCLCC, with massive necrosis, without vascular invasion. All the peritoneal sampling were negative for malignant cells (Figure 4 B). After surgery, chemotherapy with doxorubicin and dacarbazine followed by dacarbazine alone was continued until November 2017. A subsequent CT scan showed the appearance of peritoneal nodules and a new secondary bone lesion at the vertebral column. The patient started chemotherapy with gemcitabine and docetaxel, followed by gemcitabine alone for hematological toxicity.

In October 2018, the patient presented to the emergency department with lower limb weakness and dysesthesia and she was diagnosed with medullary compression due to the expansive bone lesion. She subsequently underwent medullary decompression and surgical stabilization. In March 2019, because of further PD, she started pazopanib but, after 3 months of treatment, a CT scan showed a mild pulmonary and hepatic PD, in contrast with the appearance of a rapidly increasing left axillary lesion measuring 13 cm (compared with the measure of 2 cm at the previous imaging 6 months before) which was resistant to standard pain care (Figure 5 A and B). After multidisciplinary evaluation, radiotherapy and then surgery were proposed for the high risk of bleeding but due to worsening of the patient's clinical conditions, the best supportive care was recommended.

Figure 1A and B: Histologic appearance (hematoxylin and eosin, H&E) of leiomyosarcoma on hysterectomy (B, x400) and on metastasis biopsy (A, x100). 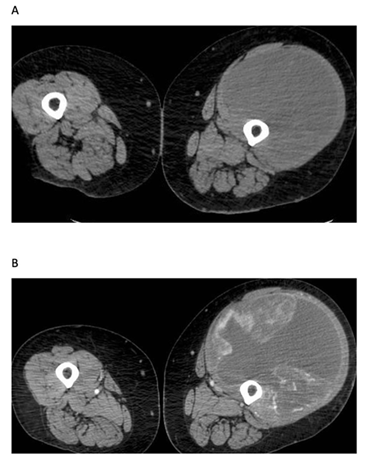 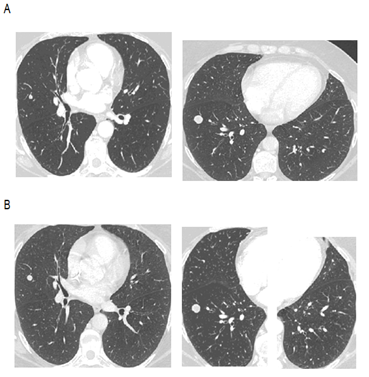 Fig 4A and B: Histologic appearance (hematoxylin and eosin, H&E) of leyiomiosarcoma on pre- operative biopsy (A, x40) and hysterectomy (B, x400). 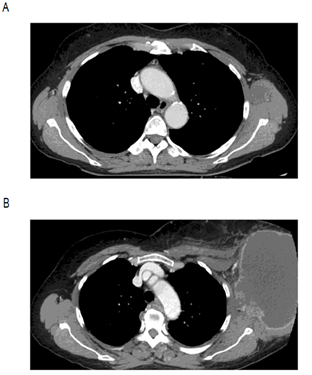 Figure 5A and B: CT scan showing a left axillary lesion measuring 2 cm (A) rapidly enlarging in 6 months measuring 13 cm (B).

Here we describe two cases of patients with documented soft tissue metastases from U-LMS with an atypical clinical course, both characterized by the rapid appearance of enlarged and painful soft tissue lesions, seriously affecting their quality of life. Given the rarity of the disease, the unusual clinical presentation and therapeutic management deserve to be discussed. Leiomyosarcomas are rare malignant tumors that could arise in any location, although most of them are localized in retroperitoneal/intra-abdominal and pelvic sites, mainly in the uterus. Compared with other types of uterine cancers, LMS is associated with a high risk of recurrence and death, regardless of stage at presentation and it represents about 30-40% of all uterine sarcomas [1].

Although hysterectomy is the primary treatment for U-LMS, approximately 70% of patients will develop a recurrence within an average of 8 to 16 months after the initial diagnosis. Recurrent U-LMS is still difficult to manage and the prognosis is still poor. Therapeutic options include surgery, radiation therapy and chemotherapy encompassing doxorubicin and dacarbazine, gemcitabine-docetaxel, ifosfamide, trabectedin, pazopanib and temozo-lomide [6, 7, 11-17]. Uterine-LMS most commonly meta-stasizes to the lung (67.7%), cranial/intracranial sites (16.2%), skin/soft tissues (15.3%), and bone (13.8%). Other very rare sites include thyroid, salivary glands, heart, liver, pancreas, adrenal gland, bowel, and breast. When the lung is the only metastatic site, patients could be treated with metastasectomy obtaining a significantly better survival than those who did not undergo metastasectomy (p=0.003). There is also a wide range of time intervals to first metastases, highlighting the need of long-term follow-up, and appropriate diagnostic imaging. Lung and upper peritoneum metastases were often diagnosed earlier in the progression of U-LMS. Skin and soft-tissue metastases in U-LMS account for about 15% of cases and are particularly important to be accurately diagnosed, as they are often misinterpreted initially as de novo primary tumors [9, 18, 19]. Bartosch et al. described 20 cases (15.3%) of 130 metastatic U-LMS patients with skin/soft tissue metastases and 13 of them showed soft tissue metastases as first sites of metastases; nine patients out of 20 underwent metasta-sectomy. The authors found no significant differences in time to metastases development (p=0.06) [9]. In this retrospective study, lung is the most common metastatic site, followed by bone, cranial/intracranial and skin/soft- tissue metastasis.

A physical examination, such as skin, soft tissue, head and neck should be considered in patients with U-LMS to detect some of these metastatic sites. To the best of our knowledge there is no description of enlarging and rapidly progressing soft tissue metastases with impressive quality of life deterioration. In our reports, the masses originating from the soft tissues have exploded in a short time, presenting huge, hard, protruding towards the outside, very painful and giving functional limitations. Curiously, the masses responded to systemic treatment less than the other metastatic sites. In fact, in both cases, while the other metastatic sites were stable under chemotherapy, the soft tissue lesions rapidly progressed. While the second patient was not suitable to local treatment on the axillary lesion due to worsening clinical conditions, the first patient was treated with palliative radiotherapy obtaining a clinical and radiological response and benefit for pain reduction and better quality of life. Therefore, in the management of this uncommon clinical presentation involving a multidisc-ciplinary team (surgeons, radiotherapists, pain therapies supporters, medical oncologists) is fundamental to integrate loco-regional treatments with the systemic chemotherapy for metastatic sites that could be critical. Moreover, it’s advisable to perform, at reference centers, the histological assessment of soft tissues metastatic lesions with an atypical behavior to avoid misdiagnosis and promptly start the most correct therapeutic management.

In summary, soft tissue metastases from U-LMS need to be rapidly recognized and diagnosed through accurate physical, imaging and histopathological exams to be correctly managed. Moreover, they may present an unpredictable clinical course compared to the other metastatic sites. In fact, they could increase rapidly despite the systemic treatments, and a prompt, correct and multidisciplinary evaluation that can lead to a rapid loco-regional control could strongly benefit the patients’ quality of life avoiding serious complications and probably adding a survival advantage.

The authors have no support or funding.