The dynamic roles of photosensitizer (PS) concentration and light intensity were measured and analyzed empirically. The efficacy of photodynamic therapy (PDT) and cell viability (CV) are measured (in vitro) and analyzed by analytic and numerical modeling. For a fixed PS concentration, CV is a nonlinear deceasing function of light intensity and exposure time; for a fixed light intensity, higher PS concentration achieves higher efficacy or smaller CV (at steady-state), in consistent to our analytic formulas. The anticancer efficacy may be improved by various strategies such as resupply of Ce6, external oxygen, or stabilizing the singlet oxygen (with increased lifetime).

Radical-mediated photopolymerization has two major processes [1,2]: (i) type-I for crosslinking (or gelation) of biomaterials using radical-substrate coupling; and (ii) type-II for photodynamic therapy (PDT) using light-initiated oxygen free radicals. Photopolymerization offers various applications in dermatology, dental, orthopedics (tissue engineering), ophthalmology, anti-cancer and anti-microbial [3-10]. Oxygen plays a critical role in the efficacy of Type-II PDT, where oxygen consumption and diffusion effects in PDT was first reported by Foster et al [1] and was updated and reviewed recently by Zhu at al [9] in 2017. The kinetics of both oxygen-mediated (type-II) and non-oxygen-mediated (type-I) was reported by Lin recently [11]. Photochemical kinetics for the efficacy of PDT is analyzed to show the critical factors of efficacy including: the concentrations of photosensitizers and oxygen in the treated target, the exposure time, intensity and does (energy) of the light applied to the target. Higher light intensity has faster rising curve of the efficacy, but it reaches the same steady-state value as that of low intensity. Higher initial concentration of oxygen and photosensitizers, C0, always provide higher efficacy. Minimum light dose and/or less exposure time for accelerated procedure by using a higher intensity (but same dose, E0) are desired. Threshold product of drug-light dose [C0E0]* is derived showing that larger C0 has a lower E0* and vice versa [13]. However, higher intensity requires a higher threshold energy, and does not follow the Bunsen-Roscoe law (BRL) of reciprocity, when there is an oxygen source term [11]. Effort to minimize side effects of PDT at high light intensity, various modified PDT protocols have been explored involving reduced PS dosage, laser fluence, or a combination of both [13-15].

Our previous studies presented detail of the kinetics and efficacy for type-I and type-II photodynamic mechanism [11]. We have also presented the improvement of anti-cancer efficacy by synergistic effects of PDT and photothermal therapy (PTT) [16-18]. The role of concentration of PS and oxygen, rate constant, oxygen external source term, light dose, intensity and exposure time in the efficacy and threshold dose of anti-cancer was theorized [12] and a drug-light dose law was also analyzed for optimal PS concentration [13]. In this study, we will focus the measured profiles of the cell viability (measured in vitro) for various light intensities and PS concentrations, which will be analyzed by our developed formulas and numerical modeling. Finally, we will compare our measured data with that of Klimenko et al [19]. 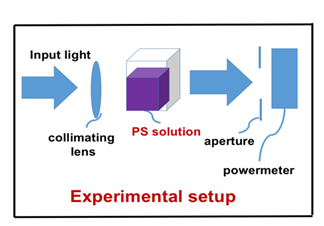 Figure 1: Experimental setup for cells in Chlorine e6 (Ce6) solution with various concentration and exposed to a laser with various intensity.

As shown by Figure 2 for the kinetics of PDT, the Macroscopic kinetic equations were previously developed for the concentration of PS (C), oxygen [O2], singlet oxygen, X, the target tissue, [A], and the light intensity, I (z, t), under a so-called quasi-steady-state condition are given by [11] 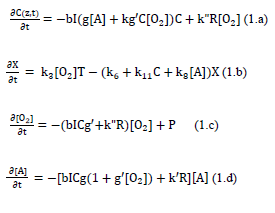 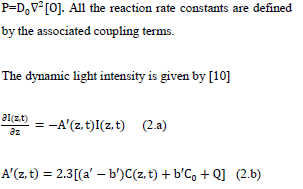 where a’ and b’ are the extinction coefficients of PS and the photolysis product, respectively; Q is the absorption coefficient of the cancer cells (or tissue) at the UV wavelength.

Solutions of C, [O2], [X] and I (z, t) provide the anti-cancer efficacy defined by Ceff=1-exp(-S), which also provides the formula for cell viability, defined as CV=1-Eff=exp (-S), where the S-function, for the situation that type-II, oxygen-mediated process is predominant, (with g<<g’), is the time integral of the singlet oxygen, which is given by the steady-state of Equation (1.b), or [10,11]

Where f is the fraction of singlet oxygen interacting with the targeted tissue having a concentration [A]. Equation (3) does not have an analytic format and requires a numerical solution of Equation (1). 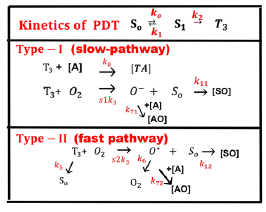 Figure 2: The kinetics of PDT, where [S0], [S1], and [T3] are the ground state, singlet excited state, and triplet excited state of PS molecules. Three pathways are shown for both the type-I and type-II processes. Ground state oxygen (O2) may couple to T3 to form either singlet oxygen (O*), or other reactive radical [O−]. In type-I pathway, T3 can interact directly with the collagen substrate (A); or with the oxygen (O2) to generate a superoxide anion (O−); in type-II pathway, T3 interacts with the ground oxygen (O2) to form a singlet oxygen (O*) [11].

Figure 3 shows numerically produced typical profiles of oxygen and PS concentration, and singlet oxygen for various light intensity of 50, 100, 200 mW/cm2, without external oxygen source (or P=0). Figure 4 is the same as Figure 3, but for the type-II S-function, for the case of without (A), and with (B) external oxygen source. We note that (for the case of p = 0), higher light intensity provides higher rising rate of singlet oxygen, as shown by Figure 5(B). However, all light intensities have the same S-function (or efficacy) at steady-state, which is defined by the time-integral (or areas covered by curves 1,2,3). We note that the time-accumulated singlet oxygen, or time integral of bC (z, t) G (z, t), gives the PDT efficacy in type-II process. For example, cancer cells are killed by this oxygen free radicals. The associated cell viability will be shown later in Figure 7.

Figure 5 shows the role of PI initial concentration and external oxygen source (with p = 0 and p > 0) on cell viability (CV) in type-II dominant case. Also shown is the threshold exposure time (t’) to achieve CV < 0.25%. It predicts that higher PS initial concentration and/or external oxygen source (with p > 0) kills the cancer cells more efficiently, or a less threshold time t’ and dose E0 = t’I0, for a given light intensity. However, high PS concentration has the drawbacks of shallow crosslink depth and high cell toxicity [13]. Therefore, an optimal concentration, with minimum cell toxicity and maximum efficacy, is desired. The optimal range of C0 required some empirical fit for the rate constants and more details was published elsewhere [16].

(i) For the same dose, lower light intensity achieves a higher steady-state-efficacy (SSE) in type-I; in contrast to type-II, which has an equal SSE.

(iii) The photopolymerization dynamics may be defined by the availability of oxygen, where both type-I and –II coexist until the oxygen is depleted. For the case that both type-I and type-II exit, the combined effects lead to a higher efficacy than the case of type-I or type-II only. Oxygen may also play critical role in two competing type-I and type-II processes, in which oxygen inhibits free-radical polymerization thereby reducing type-I crosslink efficiency.

Figure 5: The calculated temporal profiles for cell viability (CV), without (A), and with (B) external oxygen source, for various PS concentration of (5,10,15) uM (for curve 1,2,3), and light intensity of 20 mW/cm2; also shown is the threshold exposure time (t’).

We shall now present our measured data which will be compared and analyzed by our theoretically predicted features discussed earlier. Figure 6 shows the measured dynamic spectra of Chlorine e6 (Ce6) solution under red light exposure at various time. These Ce6 spectra absorption peaks are red-shifted (about 10 nm) after photoinitiated by the red light, besides the reduced peak value due to the bleach (depletion) effect. This effect was also observed by the color change. The measured spectra of Figure 6 also indicate the dynamic feature of the light intensity which is an increasing function of time when the PS concentration is depleted. Greater details of the dynamic features may be found in Ref.[10], [16].

Figure 7 shows the measured temporal profiles for cell viability for a fixed light intensity of I0=50 mW/cm2, and Ce6 concentration C0= 0.0031 and 0.0062 uM. Figure 8 shows the measured and the theoretical results for various light intensity at I0= (25,50,100,200) mW/cm2. We note that the theoretical data are based on type-II S function of Equation (1.b) which is numerically calculated based on the fit effective absorption factor, A (z, t). 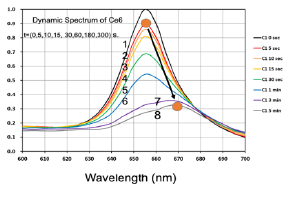 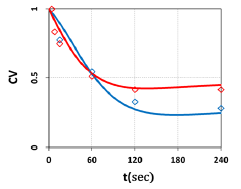 Figure 7: Measured temporal profiles for cell viability for a fixed light intensity of I0=50 mW/cm2, and Ce6 concentration C0= 0.0031 and 0.0062 uM, shown by red and green dots; also shown are the calculated curves in red and green, respectively. 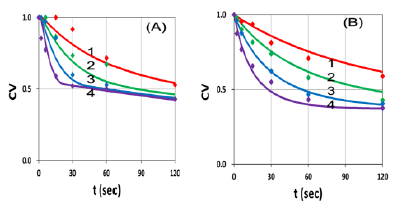 The measured data shown by Figure 7 and 8 may be analyzed by our theory as follows. Figure 7 shows that cell viability (CV) is an exponentially deceasing function of the light exposure time (or dose) for a fixed light intensity, and higher PS concentration is more efficient in anti-cancer and has a lower CV. Our theoretical and measured data are comparable to cell viability curves after red-light irradiation of Radachlorin reported in vivo by Klimenko et al [19], in which their Figure 5 may be compared with our Figure 7.

Figure 8 shows that CV, for a fixed Ce6 concentration, is a decreasing function of light intensity, in consistent to our theoretical prediction based on Equation (1.b), and Figure 3 and 4, that high intensity kills the cells faster, but has the same steady-state CV as that of low intensity, when the oxygen is completely depleted and Ce6 concentration reaches its steady-state, as shown by Figure 3(A).

(i) Higher light intensity has a faster depletion of oxygen and PS concentration;

(iii) The cell viability (CV) at various conditions are measured and shown in Figure 3. For a fixed Ce6 concentration, CV is a nonlinear decreasing function of light intensity and exposure time, in consistent to our formula, CV= 1-Ceff = exp(-S), with S given by Equation (3).

We should note that the CV and anti-cancer therapy in our in vitro measurements are much less efficient than in vivo having much higher available oxygen from the blood flowing. The anti-cancer efficacy (dominant by type-II mechanism) is limited by the available oxygen and Ce6 in the cell-Ce6-mixed solution. Therefore, it may be enhanced by the resupply of Ce6 and/or external oxygen. The CV reaches its steady-state when oxygen is completely depleted by the light. Furthermore, increase the lifetime of the singlet oxygen, which is proportional to, as shown by Equation (1.b), k3[O2] T= gg’[O2], with g=k7/(k5+k3[O2]+k7[A]); g’= k8/ (k6+ k11C+k8[A]), will improve the anti-cancer efficacy; i.e., smaller k5 term in g, or stabling the singlet oxygen by an agent such as D2O, will improve the efficacy. This strategy has been used in corneal crosslinking [10], but not yet in anti-cancer PDT.

We have measured the cell viability (CV) in Chlorine e6 (Ce6) solution and under a red diode laser exposure at various time and light intensity. The measured data are in consistent with our theoretically predicted features. Anti-cancer efficacy may be enhanced by the resupply of Ce6, external oxygen, or stabling the singlet oxygen (with an increased lifetime).