Gastric mixed adenoneuroendocrine carcinomas (G-MANEC) are rare malignancies with about 40 cases reported to date in English literature. Clinically, G-MANEC is characterized by aggressive behavior with rapid progression including a high incidence of regional and distant metastasis, leading to tumor-related death without any chance of surgical resection. Moreover, there is no uniform standard adjuvant chemotherapy for G-MANEC. Here, we report a case of G-MANEC with extensive liver metastases that gained survival benefits from neoadjuvant chemotherapy. A brief discussion of the biological behavior and treatment of G-MANEC is presented.

The term mixed adenoneuroendocrine carcinoma (MANEC) was introduced by the World Health Organization in 2010 [1]. The prognosis of MANEC is poor and radical surgery is the only curative treatment according to The National Comprehensive Cancer Network (NCCN). However, most patients lost the chance of radical resection due to the aggressive behavior of this tumor. Therefore, multidisciplinary therapy including chemotherapy or targeted therapy is always required for those with G-MANEC. Given the rare occurrence of G-MANEC, there is no uniform standard of adjuvant chemotherapy for MANEC.

Here, we report a case of G-MANEC with extensive liver metastases who achieved radical surgery after neoadjuvant chemotherapy with CS regimen and prolonged survival with this multidisciplinary therapy.

A 55-year-old man was admitted to our hospital because of experiencing stomach pain for more than 4 months. No abnormality was found during physical examination. Laboratory data were within normal limits. The routine gastroscopy found a huge ulcer in the gastric cardia and the lesions extended to the fundus. Endoscopic biopsy suggested the mixed adenoneuroendocrine carcinoma (MANEC) and the immunohistochemistry was positive for CD56, CgA, Syn and CK and the Ki-67 (+, 90%) (Figure 1 and 2).

Computed tomography (CT) revealed an unresectable stage (pT4N1M1, stage IV) (Figure 3). Chemotherapy with CS regimen was adopted with S-1 (TS-1; tegafur, gimeracil, oteracil potassium) and cisplatin. The patient showed good response to the chemotherapy and following curative surgery was achieved after three cycles. Postoperative adjuvant chemotherapy was continued for 4 more courses with CS regimen. The patient died within 31 months from the disease due to recurrence.

Figure 1: (A) The biopsy specimen is composed of two separated and different features (hematoxylin-eosin, HE stains, original magnificent, x40). (B) The immunohistochemistry of tumor cells was positive for ki67 and the ki67 labeling index was 90%. 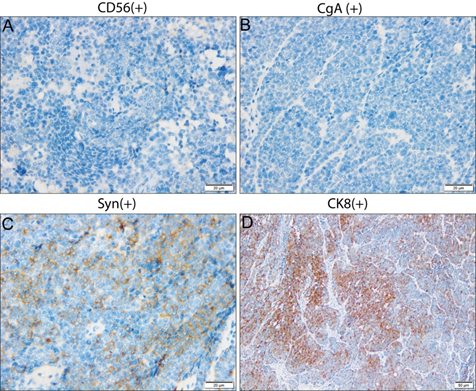 Figure 2: Immunohistochemical findings. The tumor cells were positive for Neural cell adhesion molecule (NCAM or CD56) (A), chromogranin A (B), synaptophysin (C) and Cytokeratin 8 (D). 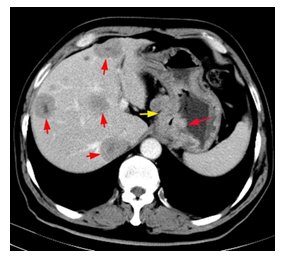 Gastric neuroendocrine neoplasms are rare malignancies which are classified into three categories: gastric neuroendocrine tumor (G-NET), gastric neuroendocrine carcinoma (G-NEC) and gastric mixed adenoneuroendocrine carcinoma (G-MANEC). G-MANEC is diagnosed histopathologically and immunohistochemically with adenocarcinoma and neuroendocrine components, with ≥ 30% of each component required. Survival is poor in patients with G-MANEC with a median survival of 12.5 months ranging from 5 to 38 months [2]. G-MANEC has been reported to be rapidly progressive and highly proliferative and the only curative option is radical resection. However, most patients are diagnosed to be unresectable because of extensive local or distant metastases. Therefore, MANECs usually require multidisciplinary therapy including chemotherapy or radiotherapy while no uniform standard of adjuvant therapy for MANEC exists due to small number of relevant studies [3].

The NCCN recommends either cisplatin / carboplatin + etoposide or etoposide +irinotecan, which are derived from regimens used for small-cell lung carcinoma without definite efficacy on MANECs. Lin [4] confirmed the efficacy of XELOX (capecitabine + oxaliplatin) on MANEC with liver metastasis which is the preferred adjuvant chemotherapy for patients with gastric cancer. However, most recommendations are for pancreatic or well-differentiated MANEC lacking a consensus statement on gastric or poor-differentiated MANEC. Several cases and phase III trial reported in Japanese about regimen with S1+cisplatin for G-MANEC showing promising results [5]. In our study, G-MANEC was histopathologically diagnosed by biopsy with extensive live metastases (pT4NxM1). Neoadjuvant chemotherapy with CS regimen (S1+cisplatin) was adopted and the patient showed good response to this regimen and the size of the liver masses reduced dramatically after three courses. Therefore, curative surgery with total gastrectomy and hepatectomy combined with radiofrequency ablative treatment (RFA) of liver metastases was performed, and pathologically confirmed the diagnosis of G-MANEC (pT4N1M1, stage IV). Postoperative adjuvant chemotherapy was continued for 4 more courses with CS regimen until severe adverse reactions appeared. Although the patient died within 31 months from the disease due to recurrence. Comparing with the average median survival of G-MANEC of 12.5 months (5 months for those with distant metastases), this neoadjuvant chemotherapy regimen in our study prolonged the survival of the patient with advanced stage.

In conclusion, we reported a case of G-MANEC with extensive liver metastases who achieved radical surgery after 3 cycles of CS neoadjuvant chemotherapy. Postoperative adjuvant chemotherapy lasted 4 courses until the severe adverse reactions appeared. Neoadjuvant chemotherapy with CS regimen for advanced G-MANEC improves survival and facilitates surgery. More clinical trials are needed to further assess the safety and efficacy of CS regimens in the treatment of MANEC.

We thank Dr. Yuanyuan Chen, from department of pathology of the Third People’s Hospital of Chengdu, for assistance of histopathologic diagnosis.

All the authors declare that there is no conflict of interest.