Inhibition of EGFR signalling has shown to be relevant for the treatment of some patients with NSCLC. CIMAvax-EGF is a therapeutic vaccine that induces an antibody response against circulating serum EGF. In a randomized Phase III trial, CIMAvax-EGF improved the overall survival of advanced NSCLC patients as compared to best supportive care, when administered as switch maintenance. Exploratory results suggested serum EGF concentration could function as prognostic and predictive biomarker. In this study, we aimed to further assess whether pre-treatment serum EGF level is a predictive biomarker of survival benefit in advanced NSCLC patients treated with CIMAvax-EGF.

A pooled analysis of 2 blinded, randomized, controlled clinical trials of CIMAvax-EGF for NSCLC was done. Patients were assigned to one of two groups: biomarker positive (≥870 pg/mL) or biomarker negative (<870 pg/mL) based on pre-treatment serum EGF concentrations. Patients from each group received CIMAvax-EGF or best supportive care. The primary outcome was overall survival. In a pooled cohort of 229 patients, 120 were considered biomarker positive (BM+) and 109 considered biomarker negative (BM-). In the BM + population, HR for overall survival (CIMAvax-EGF vs BSC) was 0.44, p=0.001.A significant biomarker/treatment interaction was found (p=0.001). We conclude that a high pre-treatment serum EGF level is a predictive biomarker of survival benefit in advanced NSCLC patients treated with CIMAvax-EGF.

Lung cancer is one of the most commonly diagnosed cancers worldwide, and its incidence continues to grow [1]. In 2018, an estimated 2.1 million new cases of lung cancer were diagnosed globally, accounting for approximately 11.6% of the global cancer burden [1]. Non-small cell lung cancer (NSCLC) accounts for approximately 85% of all lung cancers. Unfortunately, at initial diagnosis most of patients have regional metastasis or distant spread of disease, which confers a poor prognosis. The introduction of novel approaches to cancer therapy such as targeted therapy and immunotherapy has contributed to the reduction of mortality among lung-cancer patients. However, it is still the first cause of death among cancer patients with an estimated of 1.76 million lung cancer deaths occurred in 2018 [1]. With the initiation of proteomic and genomic techniques, we can base the diagnosis of cancer on a combination of methods, including a classification based on molecular features [2]. Genetic or protein profile of multiple biomarkers, accounting for cancer heterogeneity, are measured in tissue, cells, and body fluids [2].

The introduction of biomarkers in cancer treatment has allowed guiding treatment decisions beyond the old “one size fits all”- paradigm. Particularly, in the case of lung cancer treatment, the use of biomarkers is decisive to identify subpopulation of patients who are more likely to response to a given therapy [3]. CIMAvax-EGF is a therapeutic vaccine that exerts its anti-cancer activity by targeting the immune system. It induces an active immune response of the patient against circulating EGF that results in the depletion of circulating EGF in sera [4]. This, in turn, significantly decreases the probability that the remaining EGF binds to its receptor (EGFR) on the surface of cancer cells. EGF withdrawal results in the loss of a key pro-proliferation and pro-survival signal for the neoplastic cells [5].

Two randomized controlled trials confirmed the efficacy of CIMAvax-EGF in advanced NSCLC after initial platinum based chemotherapy [6, 7]. However, a recent report indicate the existence of heterogeneity in the response to the vaccine [8]. According to this, Sanchez et al. differentiated patients with short and long-term survival among those treated with CIMAvax-EGF [8]. Early attempts to identify potential biomarkers of CIMAvax-EGF efficacy found a relationship between the ability of the vaccine to produce an antibody response against EGF and survival. Patients with higher anti-EGF antibody titers (good antibody responders) lived longer than patients with poor antibody response [5, 6, 9]. Another finding was that patients achieving serum EGF concentration below a defined cut-off (168 pg/mL) after CIMAvax-EGF, lived longer than patients with higher EGF after vaccination [6]. These findings confirmed the mechanism of action of the vaccine and supported further clinical trials, yet this approach did not allow predicting which patients will benefit from CIMAvax-EGF. Rodriguez et al, found that pre-treatment serum EGF concentration [EGF] could be a prognostic and predictive biomarker in a phase III randomized clinical trial [7]. A separate analysis suggested that immunocompetence is also relevant to achieve a better response to CIMAvax-EGF treatment. The evidences emerging from this phase III trial suggest potential biomarkers (CD4 T cells and CD4/CD8 ratio) of CIMAvax-EGF efficacy [10]. However, due to its exploratory nature, this finding requires further confirmation.

This analysis of pooled data is aimed to further assess the prognostic and predictive value of EGF concentration for advanced NSCLC patients receiving CIMAvax-EGF as switch maintenance.

Individual patients data from trials IICRDEC056 and IICRDEC081 conducted in Cuba between 2002 and 2012 were pooled and analysed. Details of these trials have been published previously [6, 7]. Advanced NSCLC patients treated with platinum-based chemotherapy were randomly allocated to receive treatment with CIMAvax-EGF or best supportive care. Patients from phase II study received four doses of 1.2 mg of intramuscular CIMAvax-EGF at 1, 7, 14 and 28 days as induction doses, followed by monthly administration of the same dose. The dose used in the phase III trial was 2.4 mg administered intramuscularly every 2 weeks as induction, followed by a 2.4 mg maintenance treatment monthly. Treatment continued until unacceptable toxicity, or any study discontinuation criteria arose. Most patients did not receive further chemotherapy at progression (in consonance with the national treatment guideline), as the recommended second-line drugs pemetrexed, docetaxel, and erlotinib were not widely available in the country at the time of trial execution [7]. Overall survival (OS) was the primary endpoint. Primary study definition of OS was the period between the date of randomization to the date of death due to any cause or date of last follow up.

Nineteen Cuban sites participated in both trials [7, 11]. Local institutional review boards approved both trials at each study centre. The trials followed the principles of the Declaration of Helsinki and the Good Clinical Practice Guidelines of the International Conference on Harmonisation. All patients provided written informed consent.

Evaluation of prognostic and predictive association of pre-treatment [EGF] with OS included all trial-participants with available data (biomarker evaluable population-BEP). The analysis of the prognostic value of [EGF] was done in the BSC arm. To examine the predictive effect of basal [EGF], median OS differences of both treatment arms were measured according the EGF level before starting treatment. Survival analysis were done using the Kaplan-Meier estimation and the log-rank test. Hazard ratios (HR) for OS between treatment arms, with a confidence interval of 95%, in both subgroups of patients were assessed. Survival rates at 12, 24, 36, 48 and 60 months were calculated for each group. To determine the predictive value of [EGF], the interaction between the treatment arm and EGF level was evaluated by a cox regression model. 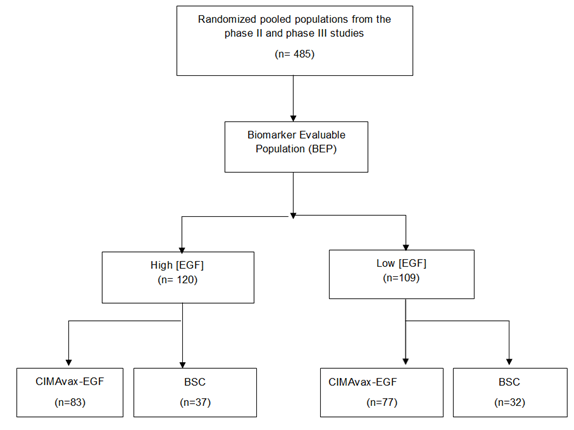 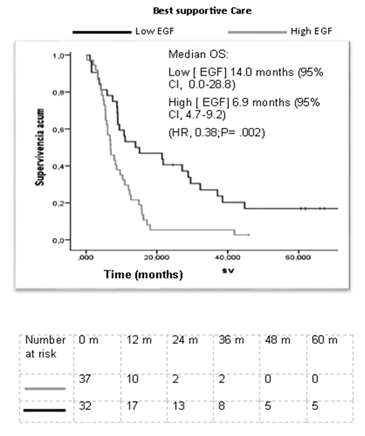 In the biomarker positive group, patients treated with CIMAvax-EGF survived roughly 6 months more than patients treated with BSC (median OS 13.03 months in the experimental group vs 6.93 months in the BSC arm, p=0.001). This difference reached statistical significance (HR: 0.44, [95%CI, and 0.29-0.67]) (Figure 3). Additionally, we observed a higher survival rate at all-time intervals in the CIMAvax-EGF group. Remarkably, at 60 months follow up 20% of patients survived in the CIMAvax-EGF group compared with a 2.7% reported for the control group (Table 2). On the other hand, in the biomarker negative group there were no differences between the treatment and control arm. The biomarker interaction test between EGF and treatment group in overall survival was statistically significant (p=0.001). 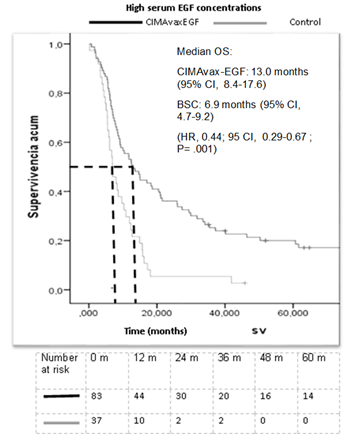 The binding of the ligand to the wildtype EGFR is necessary to induce the activation of the EGFR signalling pathway, which ultimately leads to tumour growth and metastasis. EGF is one of the most important ligands of EGFR, and seems to be particularly relevant in NSCLC [12, 13]. The mechanism of action of CIMAvax-EGF is based on its capability to induce an active humoral immunity against circulating EGF. Anti-EGF antibodies reduce its concentration and inhibit EGFR’s phosphorylation and activation. This study represents the largest analysis to date of the prognostic and predictive value of serum [EGF] in a population of patients with advanced NSCLC. Pooling data from 2 controlled trials, allowed us to better assess the prognostic and predictive capability of the [EGF] for CIMAvax-EGF efficacy.

Our data set confirmed that serum EGF level measured after platinum-based chemotherapy, exhibited prognostic value in advanced NSCLC patients. The existence of high levels of EGF warrants the required ligand binding to the receptor and thus allows tumors-associated processes, such as proliferation, invasion and metastasis. This may explain why patients with high serum EGF concentration had a worse outcome than subjects with low [EGF] [14-16].

In parallel, a significantly better survival for CIMAvax-EGF group was confirmed in patients with high [EGF]. Anti-EGF neutralizing antibodies result in the loss of a key signal for the neoplastic cells, which, in turn explains the survival advantage reported in our study for the BM+ group treated with CIMAvax-EGF [4-6, 9, 10, 17-20]. The HR for survival benefit (CIMAvax-EGF vs BSC) in the pooled population with high [EGF] was 0.44, similar to the one found in the Phase III trial for the same group (HR=0.41). This result shows the consistency of the biomarker-treatment effect beyond a single clinical trial. In the pooled analysis, the HR for the BM+ patients was much better as compared to the HR for unselected patients in the Phase III trial (HR 0.77).These results confirm the initial findings reported by Rodriguez et al and support the use of high serum EGF as a predictive biomarker of CIMAvax-EGF [7].

Researchers have proposed other potential biomarkers to predict the efficacy of CIMAvax-EGF. Saavedra et al. reported an association between baseline biomarkers of immunocompetence and survival benefit in patients treated with CIMAvax-EGF. Vaccinated patients with high baseline values of CD4 T cells and CD4/CD8 ratio, as well as low pre-vaccination proportion of CD8 + CD28− T cells, had larger survival as compared with controls [17]. This attractive approach, which remarks the relevance of a competent immune system to benefit from CIMAvax-EGF, is under confirmatory studies. More complexes mathematic models, identifying potentials predictors of CIMAvax-EGF efficacy are warranted.

Apart from the predictive biomarkers, other surrogate markers (antibody response, EGF depletion and response immunodominance) have been characterized [5]. Surrogate markers can better assist in CIMAVax-EGF maintenance, once patients are selected for this active immunotherapy approach. Potential limitations of the study include minor differences in both trials design. CIMAvax-EGF scheme of administration and patient population were slightly different in both studies [6, 7]. Another limitation of the study is its retrospective nature. A confirmatory, prospective study of the [EGF] predictive value was initiated, but it was prematurely stopped, due to the approval of CIMAvax-EGF as switch maintenance for advanced NSCLC patients.

Several studies evaluating the combination of CIMAvax-EGF with targeted therapy or other immunotherapeutic agents are ongoing [18, 24]. [EGF] was introduced as predictive biomarker of CIMAvax-EGF efficacy in Cuba in 2018. A phase IV clinical trial with this product is ongoing to assess safety and effectiveness of the vaccine in a larger population. A biomarker analysis coming from this study is warranted.

In summary, pre-treatment level of serum EGF is a worse prognostic biomarker for advanced NSCLC patients. Additionally, this biomarker can identify those patients that can benefit largely from an EGF depleting immunotherapy.