Lung cancer is the main cause of mortalities among all types of cancer. Lots of efforts have been made to elucidate the pathogenesis of lung cancer, but the molecular mechanisms are still not well understood. To identify the candidate genes in the carcinogenesis and progression of lung cancer, we acquired three datasets (GSE19188, GSE33532 and GSE30219) from Gene Expression Omnibus (GEO) database to identify differentially expressed genes (DEGs), then function enrichment analyses were performed. The protein-protein interaction network (PPI) was constructed and the module analysis was performed using STRING and Cytoscape. A total of 185 DEGs was identified, consisting of 32 upregulated genes and 153 down regulated genes. The enriched functions and pathways of the DEGs include angiogenesis, cell adhesion, G2/M transition of mitotic cell cycle, mitotic nuclear division, ECM-receptor interaction, PPAR signaling pathway, etc. we selected ten hub genes (UBE2C, RRM2, KIF11, CDKN3, KIAA0101, PRC1, ASPM, HMMR, TOP2A, and BIRC5) and further analyzed their biological functions. It was found that these genes play an active role in positive regulation of exit from mitosis, mitotic nuclear division, spindle organization, and cell division. Furthermore, Survival analysis showed that these 10 hub genes positively correlated with survival time of lung cancer patients. In conclusion, the discovery of the functions of DEGs and Hub genes can help us to understand the mechanism of the occurrence and development of lung cancer at the molecular level, and provide candidate targets for the diagnosis and treatment of lung cancer in the future.

Lung cancer is the leading cause of cancer?associated mortality [1]. It was estimated that 142,670 mortalities due to lung cancer occurred in the United States in 2019, which accounted for nearly a quarter of all cancer mortalities [2]. Despite recent improvements in multimodal therapy including surgery, chemotherapy, radiotherapy, and targeted therapy, its overall 5-year survival rate remains below 20% [3-4]. Therefore, there is an urgent need for the new therapeutic and diagnostic approaches, We usually rely on some bioinformatics tools when doing biomedical research. The most frequently used bioinformatics tools are microarray technology and bioinformatics analysis software. These bioinformatics tools are of great significance for us to study the relationship between genes and diseases. The information it provides enables us to have a comprehensive understanding of the functions of genes and their effects on diseases. As this research on lung cancer is, we used these tools to help us understand the differentially expressed genes (DEGs) related to the progression of lung cancer as well as their functions and pathways [5-7]. However, there are also some drawbacks, that is, when we conduct independent microarray analysis, there will be false positive rate. Therefore, in order to avoid the false positive rate affecting the experimental results, In this study, 3 GEO datasets was used to explore the DEGs in lung cancer tissues and non-cancer tissues. In addition, bioinformatics analysis is carried out through Gene Ontology (GO), Kyoto Encyclopedia of Genes and Genomes (KEGG) and protein-protein interaction (PPI) networks, so that we can understand the molecular mechanism of cancer more comprehensively. In conclusion, a total of 185 DEGs and 10 hub genes were identified, which may be candidate biomarkers for lung cancer.

We used Search Tool for the Retrieval of Interacting Genes (STRING; https://string-db.org/) (version 11.0) to predict DEGs interactions [11]. Analyzing the functional interactions between proteins may provide insights into the mechanisms of generation or development of diseases. In this study, the combined score of interaction > 0.4 was a significantly difference. In addition, Cytoscape (version 3.6.0), a public bioinformatics platform, which makes it possible for visualizing DEGs interactions [12]. Molecular Complex Detection (MCODE) (version 1.5.1) serves as a plug-in of Cytoscape to conduct cluster analysis of the network system to obtain hub genes [13]. Ten genes with high degree of connectivity displayed on MCODE were got by using selection criteria (MCODE score > 5, degree cut-off=2, node score cut-off=0.2, k-score=2, Max depth=100).

The Database for Annotation, Visualization and Integrated Discovery (DAVID, https://david.ncifcrf.gov/) contributed to the biological analysis of collected date. GO and KEGG analysis were performed using DAVID online tool [14, 15]. In this study, we only showed the results of biological process (BP) and KEGG. R package “ggplot2” was used to visualize GO terms and KEGG pathways.

Kaplan?Meier plotter (http://kmplot.com/analysis/) was used to assess the prognostic significance of hub genes in lung cancer. The database is capable to assess the effect of 54k genes on survival in 21 cancer types. It contains data of breast (n=6234), ovary (n=2190), lung (n=3452) and stomach (n=1440) cancer [16]. In order to better judge the prognostic value of hub gene accurately, we divided samples into two groups according to the median expression of the gene, namely, up-regulation group and down-regulation group. (high expression, top 50%; low expression, bottom 50%). The overall survival (OS) of lung cancer patients was evaluated using Kaplan?Meier survival plots. The P?values of the log?rank test and hazard ratio (HR) with 95% confidence intervals (CIs) were also calculated.

The network of DEGs was built with 176 nodes and 559 edges (Figure 1B). The hub genes which have a high degree of connectivity was identified by Cytoscape (Table 1 and Figure 1C).

DEGs were enriched in different BPs according to GO analysis. The top 10 terms were angiogenesis, cell adhesion, G2/M transition of mitotic cell cycle, response to wounding, single organismal cell-cell adhesion, mitotic nuclear division, BMP signaling pathway, activation of protein kinase activity, protein localization to cell surface, and cell division (Figure 2A). As for the pathways, the results of KEGG enrichment analysis showed that DEGs were enriched in ECM-receptor interaction, Malaria, PPAR signaling pathway, Adrenergic signaling in cardiomyocytes, Cell adhesion molecules (CAMs), and cGMP-PKG signaling pathway (Figure 2B). The functional analyses of genes in the most significant module were analyzed using DAVID. As shown in Table 2, we can find that the DEGs play a role in cell division, mitotic nuclear division, and G2/M transition of mitotic cell cycle. The biological process analysis of 10 hub genes revealed that these genes were mainly participated in positive regulation of exit from mitosis, mitotic nuclear division, spindle organization, and cell division (Table 3).

3.4 The prognostic value of hub genes

The prognostic value of 10 hub genes in PPI network was obtained from Kaplan?Meier plotter (http://kmplot.com/analysis/). As shown in Figure 3, a high expression of hub genes corresponded to a poorer OS for lung cancer patients. All the hub genes we identified had statistical significance. 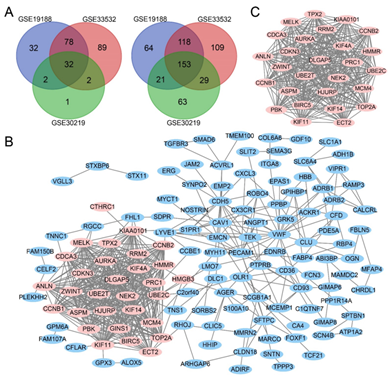 Figure 1: Venn diagram, PPI network and the most significant module of DEGs. (A) DEGs were selected with a |log2FC| >2 and adj. P-value <0.01 among the mRNA expression datasets GSE19188, GSE33532 and GSE30219. The 3 datasets showed an overlap of 32 upregulated DEGs (left) and 153 downregulated DEGs (right). (B) The PPI network of DEGs was constructed using Cytoscape. (C) The most significant module was obtained from PPI network. Upregulated genes are marked in light red; downregulated genes are marked in light blue.

Table 2: GO and KEGG pathway enrichment analysis of DEGs in the most significant module. 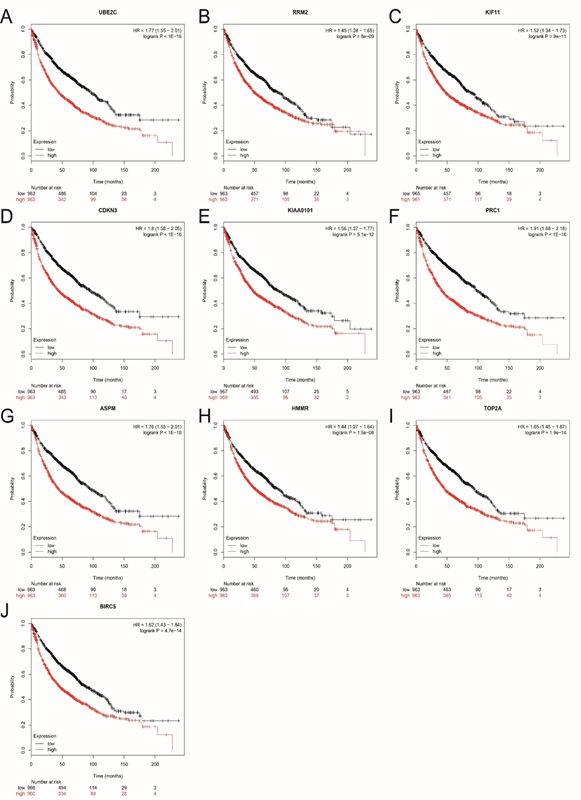 To date, conventional surgery and chemotherapy remain the main treatment modalities for treating lung cancer. However, numerous lung cancer cases are diagnosed at an advanced stage. When treating patients with advanced lung cancer using conventional surgical resection and chemotherapy, the 5?year relative survival rate is only 4% [17]. Therefore, it is essential to explore the mechanisms of lung cancer progression to prevent its occurrence, guide pharmacy, indicate the prognosis, or improve survival rate.

The high-throughput platforms for detection of gene expression have been developing rapidly in diseases progression, which provides the basis of new target discovery for diagnosis, therapy, and prognosis of cancers [18,19]. Compared to the previous studies that only focused on several genes or a single cohort, this study selected 3 gene profile datasets from different research teams to integratedly explore the driven-genes and biological pathways in lung cancer. Finally, we identified 185 DEGs (32 upregulated and 153 downregulated). Biological pathway enrichment analysis revealed that cell adhesion, G2/M transition of mitotic cell cycle, response to wounding, single organismal cell-cell adhesion, mitotic nuclear division, BMP signaling pathway has certain influence on the development of lung cancer. The PPI network was constructed with 176 nodes and 559 edges. We then selected the most significant modules from the PPI network, and this module was mainly related to cell division, mitotic nuclear division, G2/M transition of mitotic cell cycle, mitotic spindle assembly, chromosome segregation, p53 signaling pathway, cell cycle, etc. The 10 hub genes in PPI network were selected by the degree of connectivity, including UBE2C, RRM2, KIF11, CDKN3, KIAA0101, PRC1, ASPM, HMMR, TOP2A, and BIRC5, which might play important roles in lung cancer. Several studies have proved that the expression of UBE2C was elevated abnormally in various cancers at both mRNA and protein levels. Increased UBE2C enhanced the ability of cell proliferation and predicted a poor prognosis [20]. RRM2 is a metabolic gene involved in nucleotide synthesis, which is abnormally expressed in many kinds of tumors and promotes the oncogenesis and development of tumors [21]. KIF11, a member of the actin family, is the motor protein needed to build bipolar spindles in cell division, could be used as a therapeutic target for tumors due to its function in tumorigenesis [22]. CDKN3 plays a crucial role in cell cycle regulation, Several studies have confirmed that overexpression of CDKN3 is closely related to tumor proliferation and metastasis [23]. KIAA0101 acts as a conserved PCNA-binding protein and plays an oncogene role in a variety of tumors [24]. PRC1 is essential for cytokinesis, Abnormal PRC1 expression will lead to chromosome instability and cancer evolution [25]. A large number of literatures have shown that ASPM is up-regulated in many cancers. Including prostate cancer, the proliferation and the invasive ability of cancer cells could be promoted by up-regulation of ASPM [26]. HMMR is involved in directectin the division of progenitor cells, supporting nerve growth in a PLK1-dependent pathway. Deregulation of HMMR was found in immortalized tumor cells [27]. TOP2A acts as a regulatory protein of topological state and involved in chromosome condensation and chromatid separation. It was proved to be a prognostic biomarker for bladder urothelial carcinoma [28]. BIRC5, also known as surviving, was an evolutionary conserved eukaryotic protein, played a vital role in the process of cell division [29]. Kaplan?Meier plotter was used to assess the prognostic value of hub genes, and the results indicated that high levels of these hub genes predicted poor OS in patients with lung cancer.

There were still several limitations in this study. First of all, In this topic, we have performed the function and prognostic value of hub genes, but only 10 hub genes have been analyzed, and the potential value of other genes that have not been studied, so the research in this field still needs to be further explored. Secondly, there are few biological information analysis tools used in this study, and TCGA and other databases can be used to verify this study in the future research.

In conclusion, the study identified 185 DEGs in lung cancer using bioinformatics analysis. The functions and pathways of DEGS were analyzed by using GO and KEGG enrichment analysis methods. In addition, 10 hub genes were identified and found to be reliable prognostic markers for lung cancer. And this study provided powerful basis for lung cancer studies, and in-depth experimental studies were needed.

This study was supported by Health and Family Planning Commission of Hubei Province project (WJ2015XB019 2015-2016) and Research and Development project of Xiangyang City (2014).

Jiubo Fan designed the study. Meng Wang and Tian Xie wrote the manuscript and performed the bioinformatics analysis. All authors read and approved the final manuscript.

The authors declared no competing interests were existed.